It's summertime in China, and that means a few important things – large men with t-shirts rolled up to their chests, copious amounts of Snow beer and butts. Baby butts. Everywhere. All of the time.

That's because many Chinese parents choose to deck out their infants and toddlers in "split pants" – trousers that have an al fresco attitude towards bums and genitals.

Known in Chinese as "开裆裤" (kaidangku, literally "open crotch trousers"), split pants have been around for a long time.

Throughout much of Chinese history, the primary type of clothing donned by both men and women was the robe: long, sleeved dresses made from varying qualities of fabric, depending on the wealth of the wearer. But that's not to say that the concept of pants didn't exist. As early as the Spring and Autumn period – vaguely 771 to 476 BC – there are records of people wearing cloth leggings to ward off the cold. Like split pants, these leggings typically covered the leg up to the knee, but then broke off into an open section around the crotch – an area, which, at the time, was covered by the robe.

By the time of the Six Dynasties, around 220 to 589 AD, a version of split pants seemed to be all the rage with China's youth. According to Baike (a Chinese website similar to Wikipedia): "In the Six Dynasties, families would dress their children in white silk pants [...] these ancient pants were only two trouser legs, with the top tied together with a belt around the waist." Sure sounds like kaidangku to us.

In our research (i.e. looking through old Chinese paintings for baby butts) the earliest depiction of split pants we've found is from the 12th century Song Dynasty, in the painting Children Playing in Autumn Court by Su Hanchen: 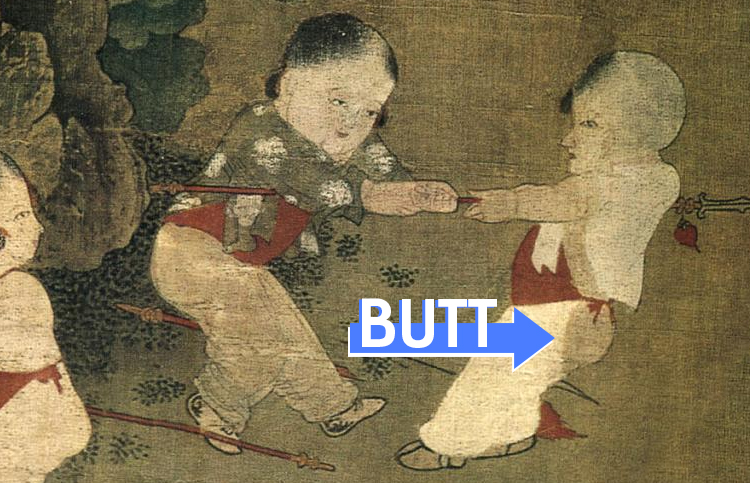 As described in the Six Dynasties article, these pants seem to be composed of two trouser legs, connected not by a sewn-in crotch, but by an apron-like string that may also have connected to the child's shirt.

And if the system ain't broke, don't fix it – some 800 years after the Song Dynasty painting was finished, the first photographic evidence of Chinese split-pants (that we could find) appears. Taken by a LIFE photographer in 1948, this picture was meant to depict a gathering of Chinese supporters of US presidential candidate Thomas E. Dewey (of "Dewey Beats Truman" fame). Much more important than the political rally, of course, is the fact that this lucky photographer managed to snap a shot of these suspender-style split pants: 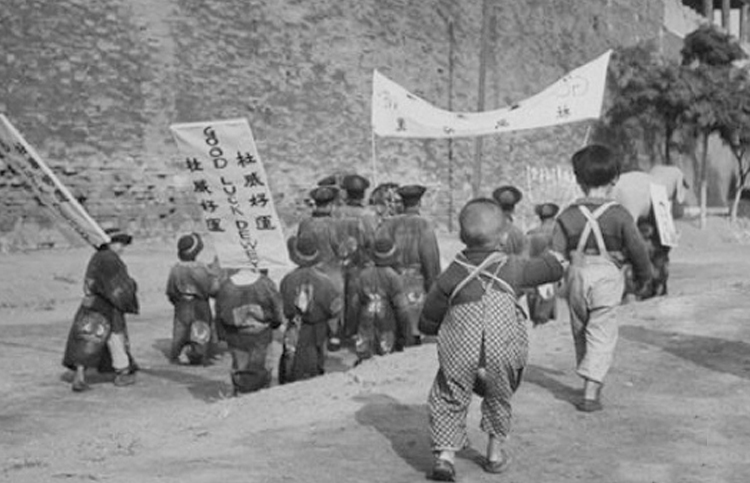 Open-crotch pants lasted out the 20th century in style, even bringing some much-needed merriment to the depths of the Cultural Revolution, as relayed by a China Daily article that notes, "when Mao-suit grays and dark blues were the norm for adults, children's vividly hued kaidangku were the only splashes of color on Beijing's drab streets." (Along with, presumably, "splashes of color" coming from within the splits themselves.)

The reason that parents fitted their children in split pants during the Six Dynasties was the same reason the pants were beloved in the Cultural Revolution – easy clean-up. If a tot could simply master the ancient Chinese art of squatting to relieve oneself, the split pants promptly pulled themselves out of the way, allowing for mess-free use. Many also contend that they make potty training easier and faster – a child with split pants can learn to feel their body's urges and deal with them, so the argument goes, which makes the eventual transition to closed-crotch pants all the easier.

But the winds of change may be blowing against the exposed baby butt of split pants. While the open-crotch design meshed perfectly with a lifestyle in the countryside (i.e. where it's possible to drop a behemoth baby-turd without getting on anyone's nerves) they don't work well with city life, where people notice even a modest turd left on a subway seat. Perhaps more importantly, people have realized that exposing infants' and toddlers' genitals to the natural elements may not be a great idea. Many contend that split pants make young children – especially girls – more prone to UTIs and other infections.

In the run-up to the Beijing Olympics in 2008, there was a split-pants crackdown. Beijing authorities didn't want their foreign guests to be greeted by a baby's butt, let alone a child taking a dump on a public sidewalk. According to an article published at the time, local authorities were "persuading parents to eschew bare bottoms in favor of diapers, at least for the duration of the Olympics." 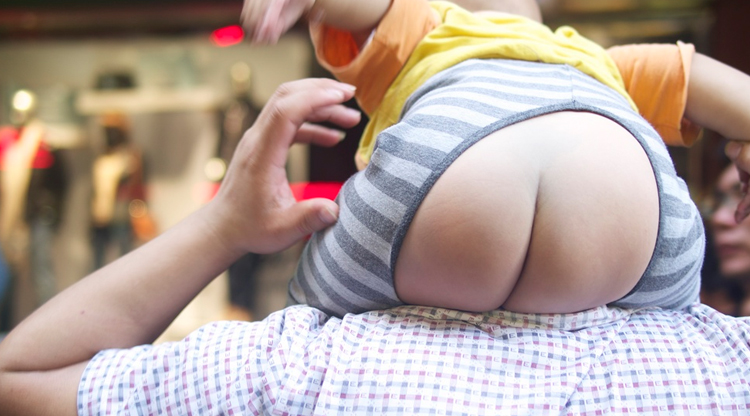 But the Olympics were just the peak of a trend that started a decade earlier, in 1998, when Pampers first came to China.

Until Proctor and Gamble brought Pampers disposable diapers to the People's Republic, split pants stood (open, waving their goods) unopposed. Cloth diapers existed, sure, but they weren't common – they were occasionally worn in the wintertime when open-crotch pants could have led to frostbite (another check in the "negative" column for split pants), but were far from dominant. But disposable diapers? They turned out to be the biggest thing since sliced noodles (刀削面, by the way).

Pampers came to China in a big way. Within a decade, the Chinese diaper industry was worth well over a billion USD per year, and it hasn't stopped growing. The brand initially launched in major cities (i.e. those places were it's less appropriate for a child to drop a big one in public) and caught on among China's new urban population – much to the expense of split pants.

Disposable diapers may very well mark the demise of kaidangku. Despite being in the country for less than two decades, they have already caused a significant change in how China views split pants. Formerly, crotchless pants had no markings of class, wealth or background – it was just what kids wore.

But now, many in the diaper-wearing east coast urban elite scoff at the idea of split pants as something from the countryside – they're old fashioned, dirty, rural.

Open crotch pants were once described by an over-eager Christian Science Monitor reporter as "as much a sign of China as Chairman Mao’s portrait looming over Tiananmen Square." Yet – uncannily like the Great Helmsman himself – they are being steadily pushed from modern Chinese society by the forces of urbanization and international capitalism.

While the end may be in sight (pun intended) for split pants in China, there is one last hope – fucking hippies.

A budding "Diaper Free" movement in the West – specifically in America, and we assume there is a massive overlap in membership between this and the gluten-free movement – has embraced the idea of babies and toddlers wearing open pants and relieving themselves in public. With founding texts like Diaper Free! The Gentle Wisdom of Natural Infant Hygiene and online resources like godiaperfree.com, there is a growing community that embraces and specifically talks about the kaidangku (if in a slightly Orientalizing "ancient Chinese wisdom" sort of way).

In China, however, it's important to enjoy (that's probably not the right word) split pants while you still can – for this current generation of Chinese babies may be the last to let it all hang loose. Explainer: Why Does China Only Have One Timezone?

'Beijing Time' for all! Explainer: Everything You Need to Know About the Year of the Sheep

Who are they most compatible with? And who are their mortal enemies? We answer your Sheep Year questions.

Explainer: How China Got its Flag

How China got its stars - and almost its stripes.