Ever wonder why you always get one yuan, five mao and one mao coins in Shanghai but in Beijing you get bills instead? This discrepancy isn't just just another side to the Shanghai vs. Beijing coin, it's a nation-wide phenomenon: not unlike how China is split into grain vs. rice regions, it can also be divided into coin vs. bill regions.

In the map below, you can see paper currency predominate for lower denominations in blue and where coins are king in red. 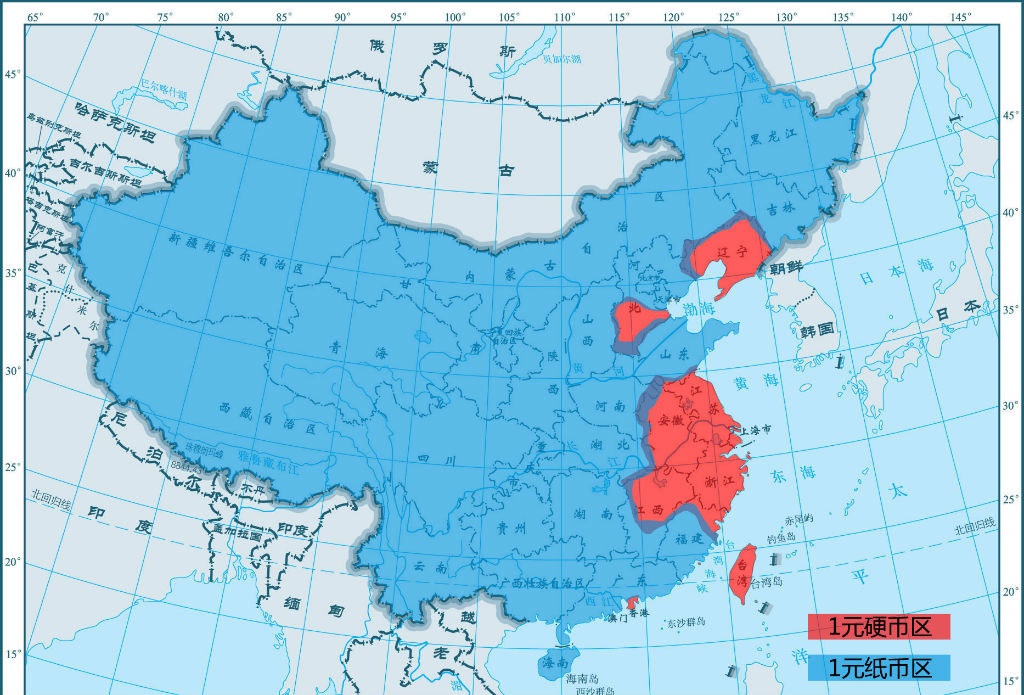 This division dates from 1992, when the central bank began testing a pilot scheme in Shanghai, Zhejiang, Shenzhen, Jiangsu and Liaoning to convert all denominations of one yuan and lower to coins alone. In doing so, they could safely determine the extent to which the switch translated to savings on seigniorage for the national treasury.

The reason these particular regions were targeted in Operation Kill Bill* was twofold: first, because Nanjing, Shanghai, Shenzhen and Shenyang are home to the nation's four big mints; and second, because in the humid, rainy southeast, as well as in the coastal Liaodong peninsula, paper bills are more susceptible to damage than they are inland.

Some sources also suggest that coins are deliberately eschewed in the country's border regions so as to prevent "metal outflow" and keep those precious (or not so precious) raw materials safely within Chinese borders.

Paper bills have a long history in China - longer than in anywhere else, in fact. The Mongol Yuan Dynasty that ruled China 1271-1368 was the first government in the world to print and circulate fiat money, an innovation that deeply impressed Venetian traveler Marco Polo during his 13th-century journey to the East.

In recent years, the People's Bank of China has also issued five yuan coins, but the limited runs have been immediately hoarded by collectors and have never made it into general circulation.

In the United States, debate has raged for decades over whether or not to replace the one dollar bill with a one dollar coin. Despite businesses from vending-machine operators to public-transport providers complaining about the cost of counting and stacking dollar bills, and of fixing machines jammed by misfed bills, the American public just don't like change (zing). Britain introduced the one-quid coin in 1983 and Canada started replacing its one- and two-dollar notes with the loony and twoonie in 1987 and 1996, respectively. LP Films Video Caption Competition: 'A Slap is Worth A Thousand Yuan'

Enter this Slap happy video competition for some alcoholic advantages

It's the last days of 2013 and you know what that means - end of the year lists. To count down to 2014, we've decided to look at some of the more notable albums of the year with a Mainland connection. Shanghai rock godfathers Top Floor Circus return with a double-album opus.

Chinese actress Tang Wei lost 210,000 ($34,731) yuan on Saturday after being tricked over the phone to wire the money to an alleged fraudster.

Teaching Chairman Mao to chairmen of the board