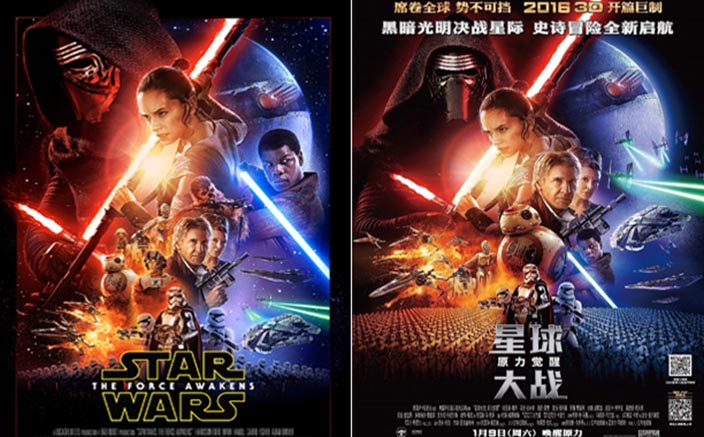 Is the Chinese version of the new Star Wars poster racist? Yes, according to the social media world (the title is a bit of a trick question).

If you take a close look at the above posters (the one on the left is the UK poster, the one on the right the Chinese version) you’ll notice a major difference in relation to the size of the film’s main protagonist.

The poster comparison received worldwide attention yesterday after one fan pointed out a glaring – and startlingly obvious – modification, actor John Boyega’s character had been shrunken to the size of a half-eaten dumpling. That’s right, the main character has been downgraded, it’s not a cruel Photoshop trick and you’re (probably) not high on LSD.

Although it has been a year since the Sony hack publicized an unnamed producer stating his belief international Hollywood audiences are racist, the story again gains relevance with the new The Force Awakens poster. It can certainly be argued Disney’s promotion of the upcoming Star Wars film has a color-bias. Are the two things linked and is Disney selling out on a cynical level that goes against the core values they profess to promote?

The difference in size, between the two posters, is undeniable and has led to accusations that Disney’s China office is trying to downplay the role of the character (a pretty serious accusation if you ask us). As always, Twitter reacted: 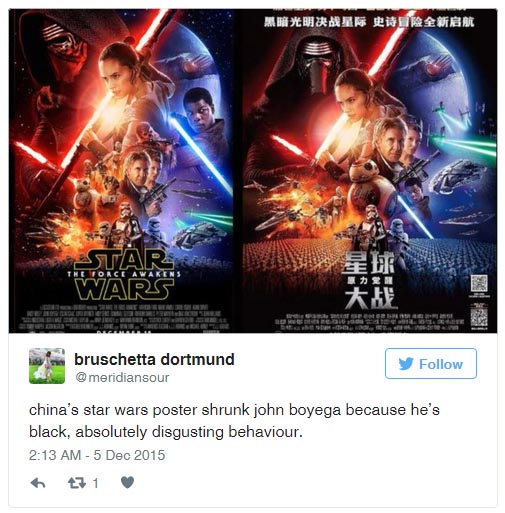 It turns out, according to Entertainment Weekly, that this is not the first time a Hollywood marketing campaign has 'whitewashed' a character. A 2013 Italian marketing drive for the film 12 Years a Slave allegedly chose to highlight secondary characters, played by Michael Fassbender and Brad Pitt, over the film’s black star - Chiwetel Ejiofor.

There are also several other minor (and less controversial) differences between the posters, including the removal of Chewbacca and the size of the stormtrooper army featured at the bottom of the image.

There is no suggestion by That's that any promotional material was changed for anything other aesthetic reasons.

The 47-year-old man faces a mandatory minimum sentence of 15 years in federal prison without parole.