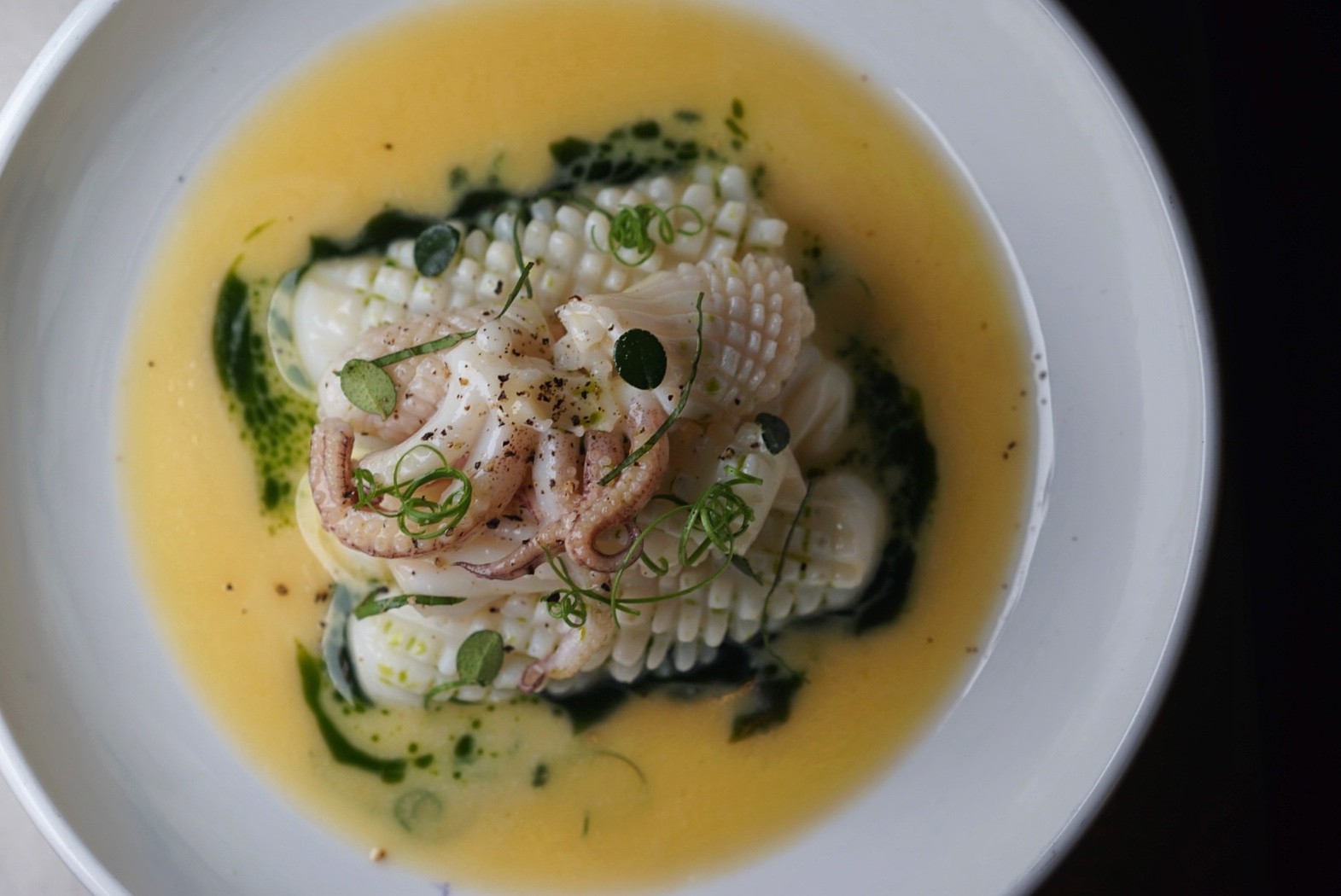 The 18-seater serves a tight menu of neo bistro fare that focuses on Mediterranean flavors with an Asian twist. 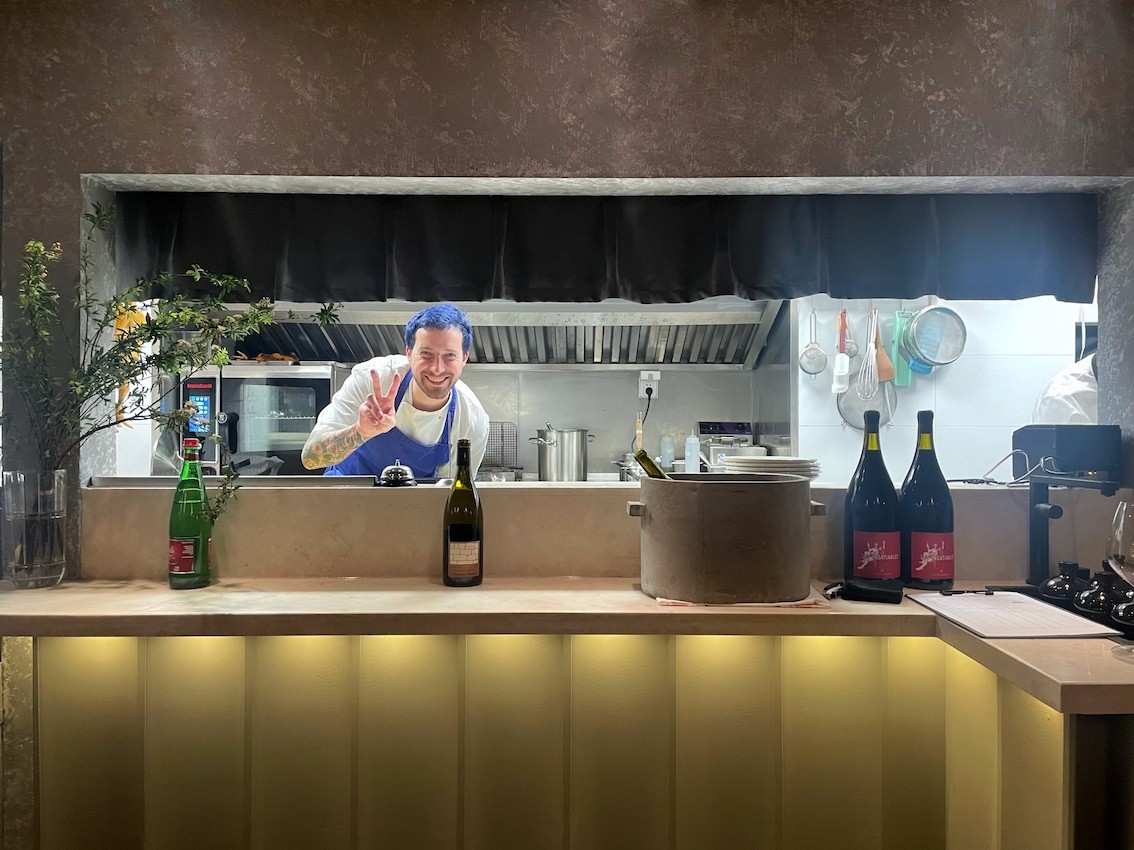 Juke – coming from the old English word meaning ‘to trick’ or ‘fake out’ – rings true in the playful nature of the menu.

Bites aim to deceive the senses and change the notion of what you may assume. The communal feel of the restaurant comes from the tight square meter-to-guest ratio. You’re essentially having dinner with those at the wood-rimmed, marble table next to you, so don’t arrive anticipating an intimate chat.

That being said, it is ideal for scoping out the dishes being consumed by those around you, snagging a recommendation or – if you’re very, very charming – a bite; it’s familial after all.

Come spring, they plan to expand seating into their outdoor terrace, giving them room to grow with the seasons.

The Food and Wine

I’ve been lucky enough to eat Michael’s food at two of his last three venues, and while each is distinct, the common thread weaving its way throughout is the playful use of local ingredients and flavor pairings in a way that add value to a dish.

Fusion is a card trick that has long been overplayed, but when you’re holding a royal flush, you play to win. Juke’s menu is the royal flush in this metaphor. 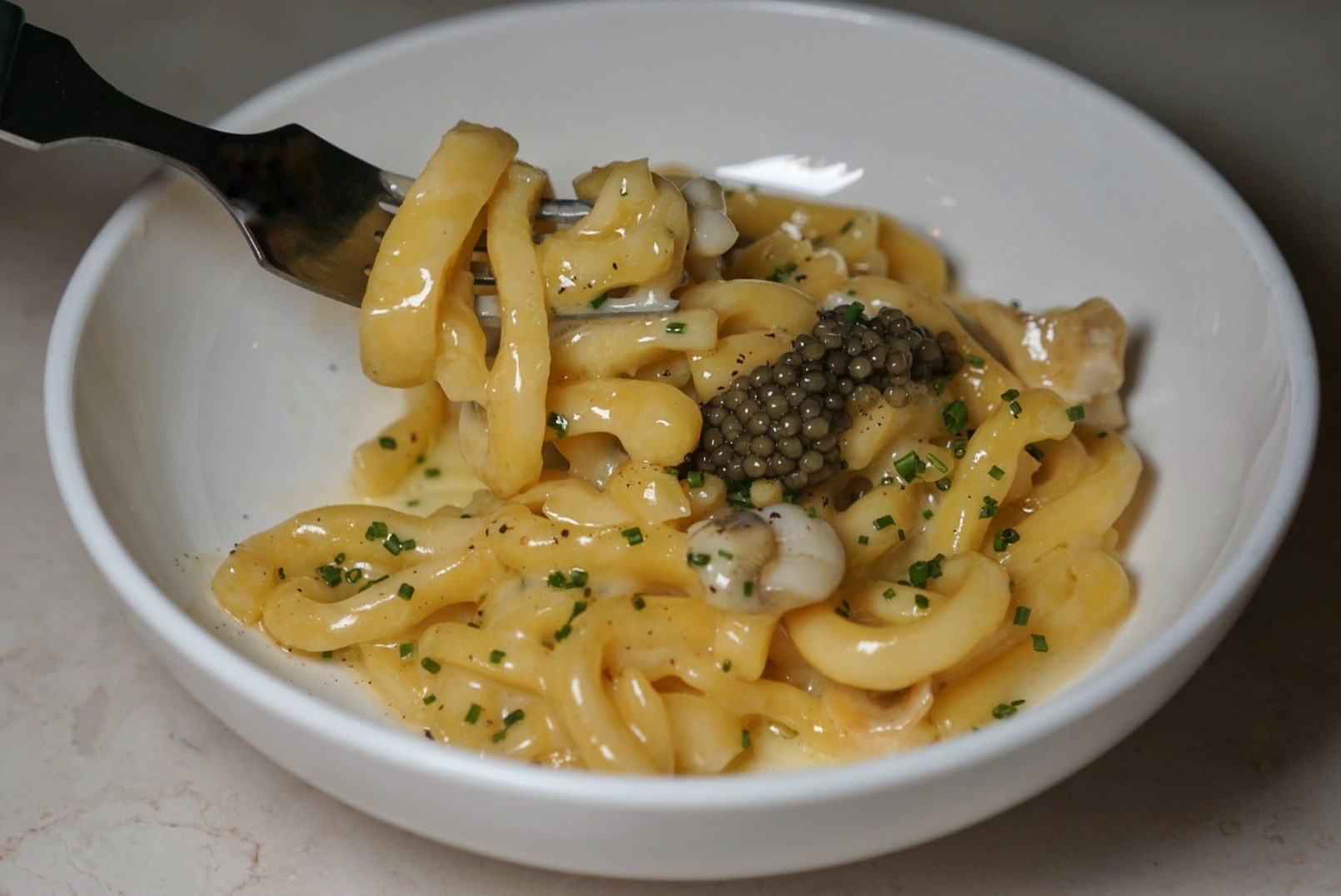 But, before we get to my personal favorite part, the cuisine, the unorthodox wine menu is deserving of the foreground.

Known as The Acre Project, wine list co-creators Mathieu le Pape and Sebastien Dallee first selected a handful of winemakers using the criteria that they can only be producing on 25 hectares or less. That’s super small in the world of wine – thus assuring that each bottle is a handmade work of art, rather than a mass-produced, widely-distributed offering. So the focus is on the actual winemakers, emphasizing the people behind the grapes. Bottles and by the glass pours are competitively priced – think Southern Italian Bianci with high florality for RMB90/glass; juicy, structured 100% Pinot Noir for RMB68/glass. First up is Ilya Gorshkov (Italo), with sippers like Made in Tokyo (RMB92) – a light-flavored profile of sake, gin, hibiscus tea, basil and citrus with a medium balance of alcohol that comes through as refreshing and subtly sweet.

The Martini No. 1(RMB98) is a crisply translucent glass adorned with eye-dropper dots of activated charcoal syrup with a kumquat infusion. 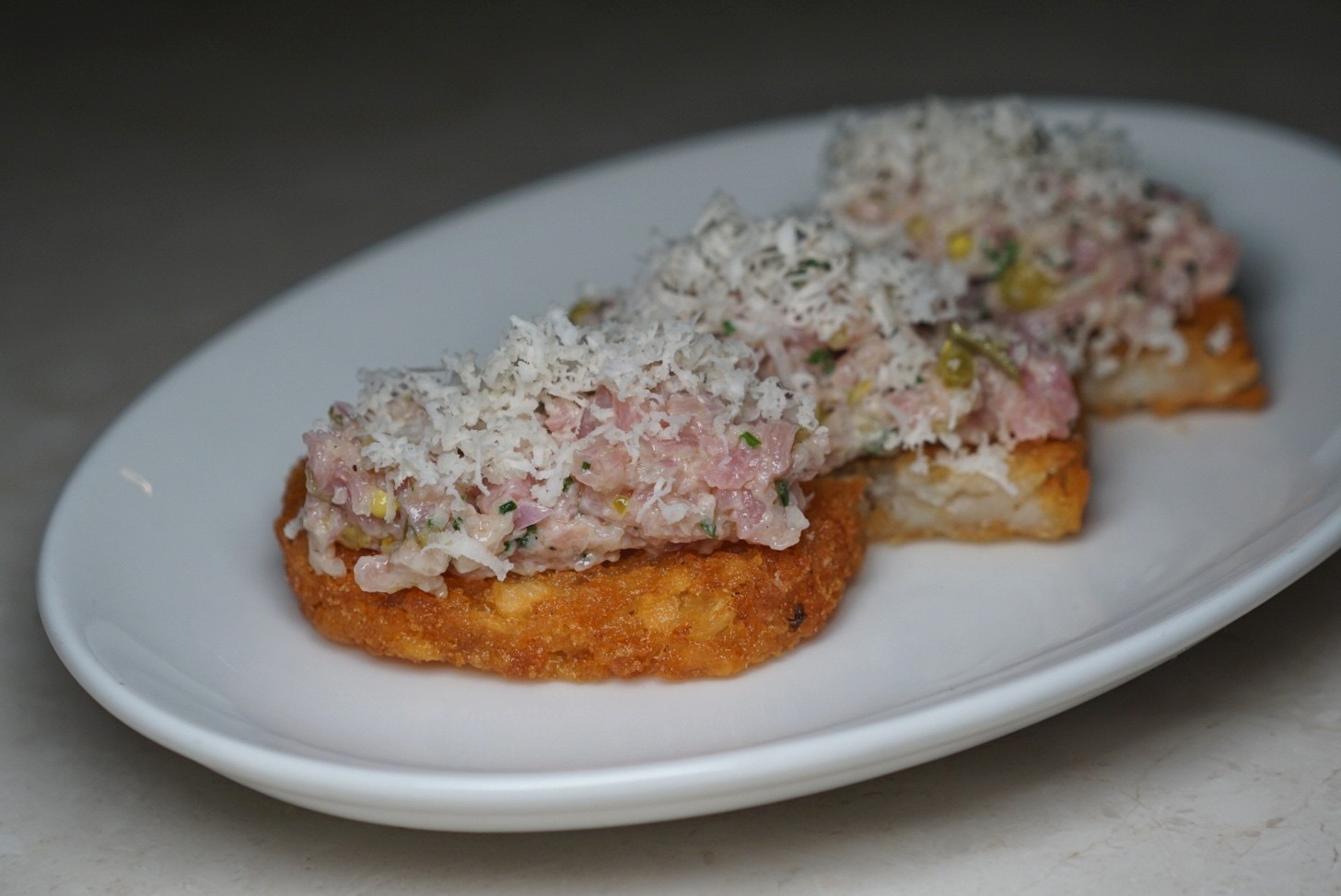 Now that you’ve got your liquor jacket on, onto the food.

Playful in name, presentation and ingredients, the Potato Bites (RMB78) place – at first glance – a focus on the fresh horseradish-coated veal tartare (a noticeably milder alternative to the routine beef tartare), speckled with pickled suandou instead of the customary gherkins.

But a bite reveals the true star – the crispiest, crunchiest potato explosion that unassumingly acts as the base. Like a superlative rendition of a McDonalds’ hash brown, in all of its fried spud glory, it steals the show. 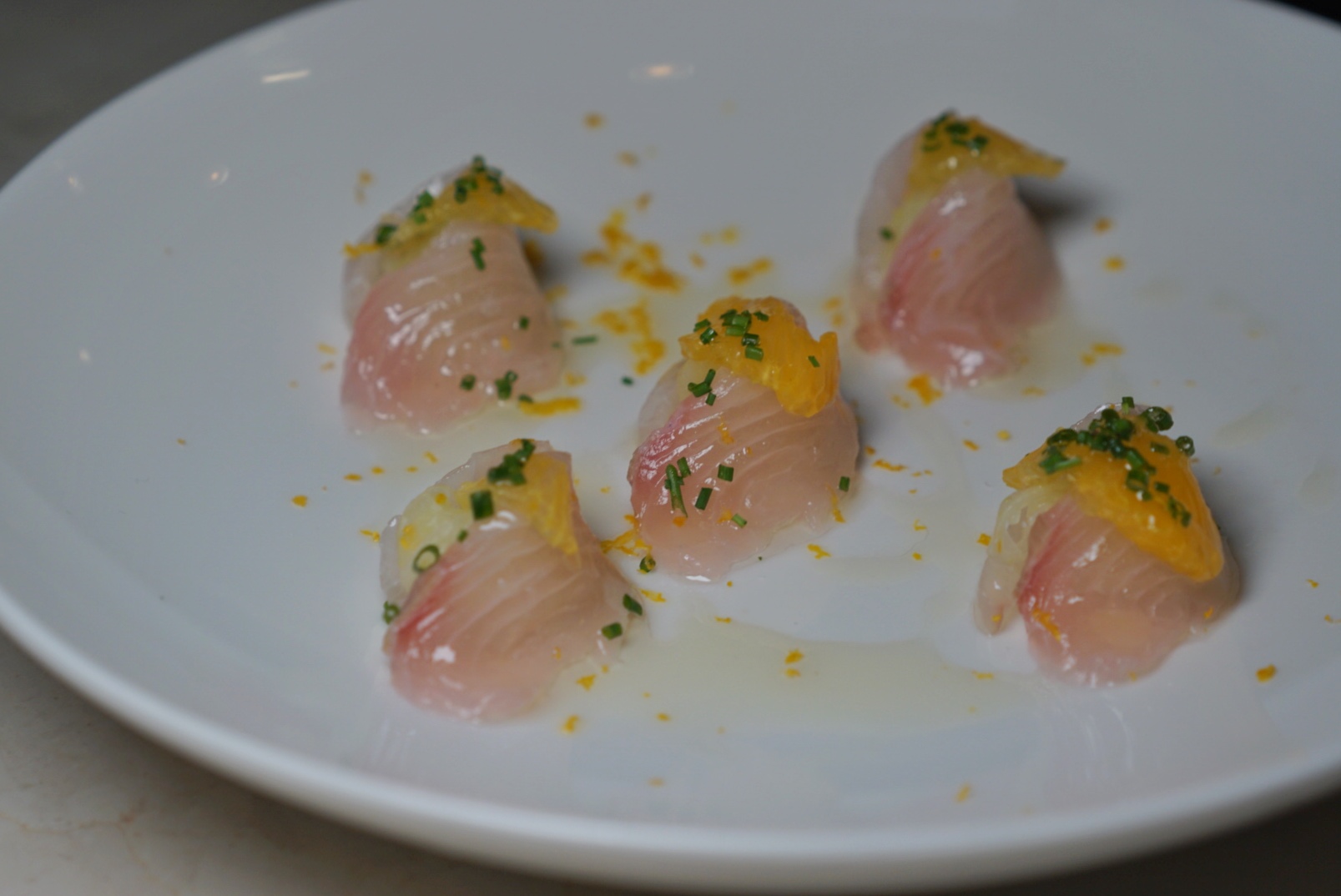 Delicate in any aspect of the meaning, Yellowtail (RMB98) is marinated in a whirlwind of citrus – Buddha’s hand, yuzu and orange – then placed astride pickled fennel.

This is all well and good; citrus and fish have gone together since the beginning of time. But then, there’s the smoked olive oil, a generous coating that pervades throughout, leaving a pleasantly slick lining on your tongue even after the fish melts into butter.

My favorite of the night, the springy Calamari (RMB88) is elegant in its simplicity – modestly resting in a tomato water, sake and butter broth, dribbled with aromatic arugula oil.

Finely chopped Sichuan peppercorn leaves a hint of numbing tingle that pairs with the tomato’s acidity and the butter’s – well – butteriness. (I don’t care if that’s not a word; just look the other way while you think about it so I can lick the bowl clean.) 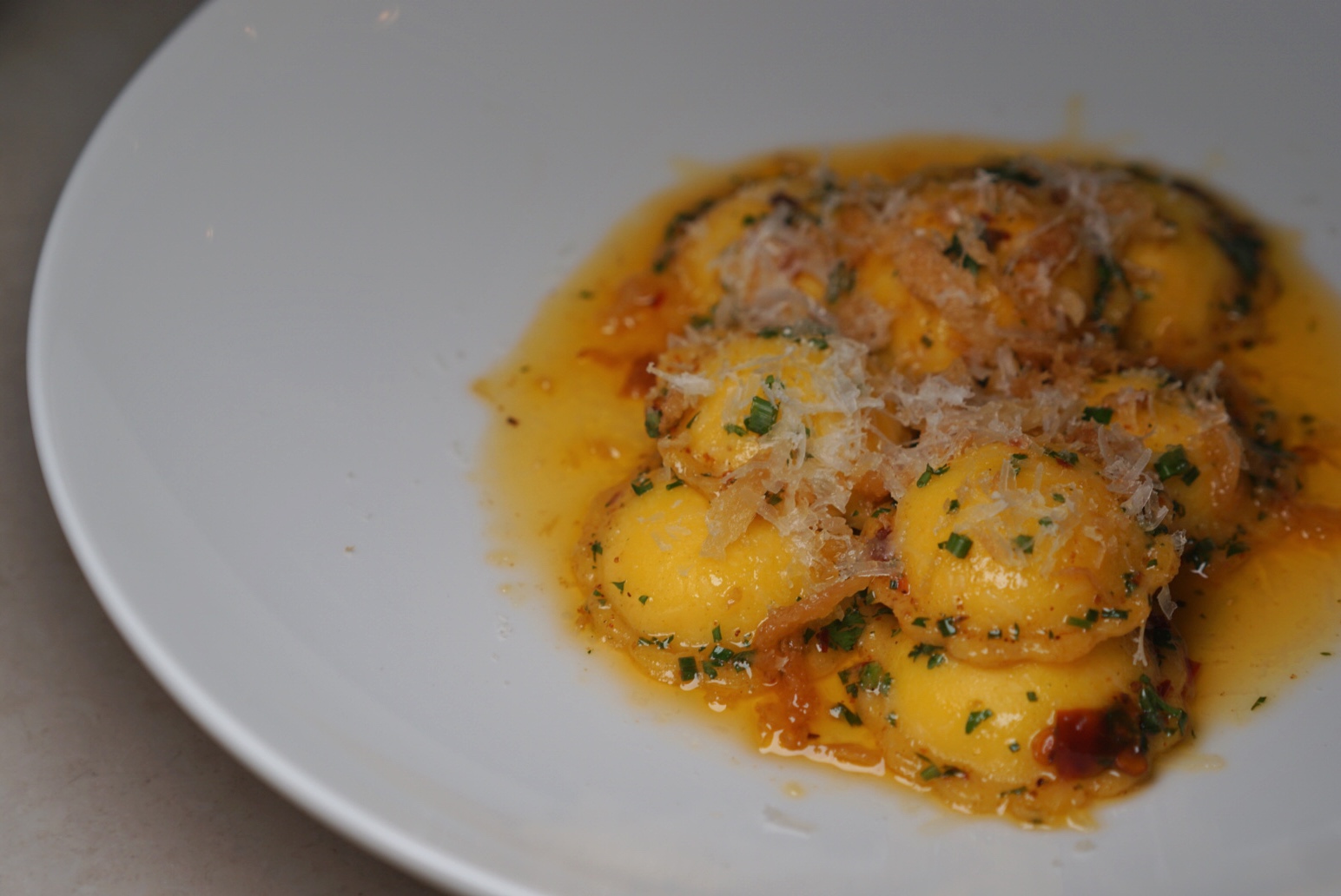 Lush ricotta explodes from the Raviolini (RMB78) when pierced, elevated by dewy dabs of fermented chili brown butter. While the pasta is soft, the roughly chopped bread crumbs add texture, a notably thought through component on every plate. 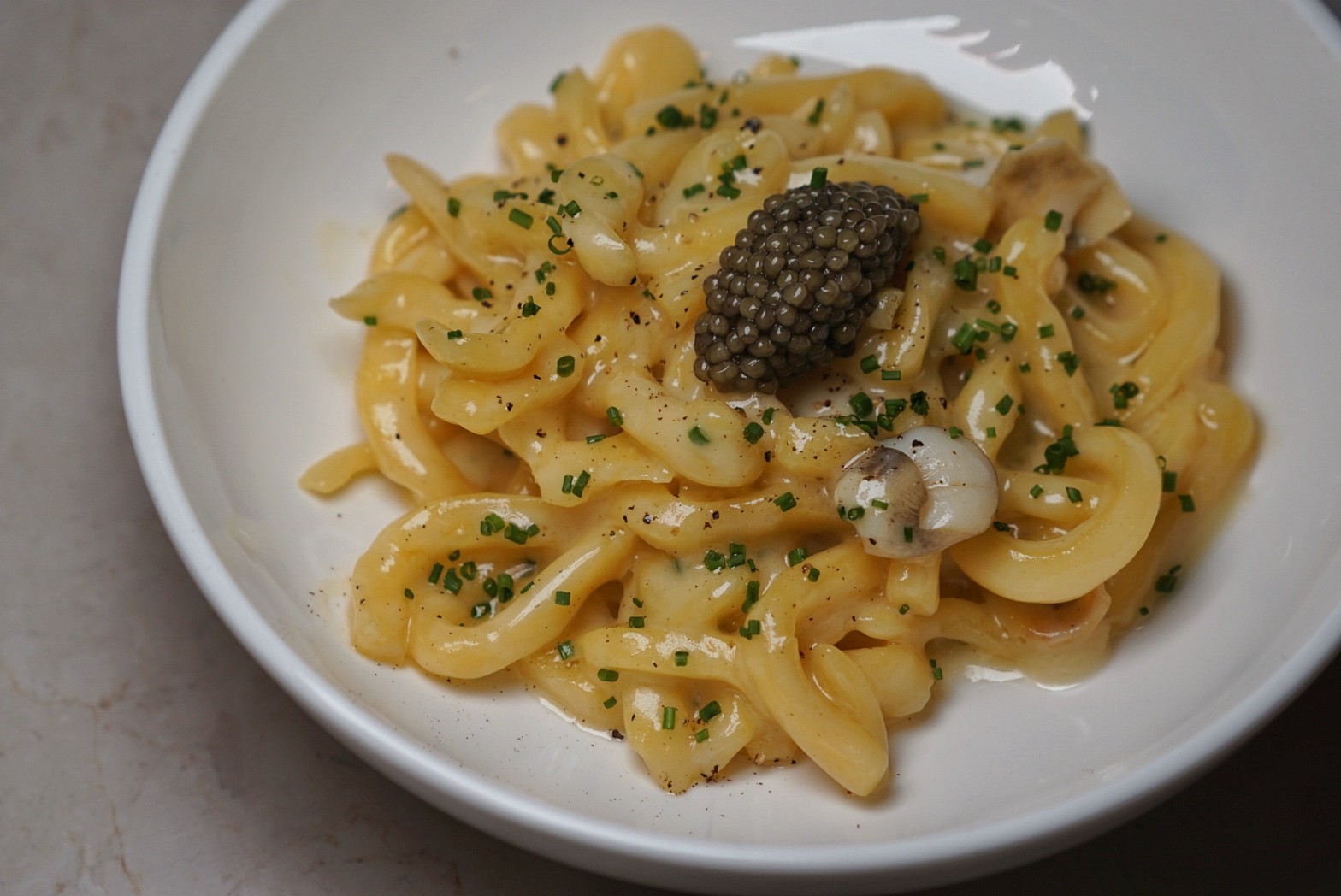 Like a cresting ocean wave, the umami-rich dashi butter glaze coats the hand-rolled Udon (RMB148), studded with razor clams and topped with a glistening quenelle of Sichuan caviar. Announcing its arrival before it can even be seen, the Osso Bucco (RMB148) fills the room with the smell of slowly stewed veal shank, smothered in a doubanjiang-spiked mapo tofu gravy ‘gremolata.’

The meat barely clings to the marrow-filled bone, pulling off in succulent shreds. 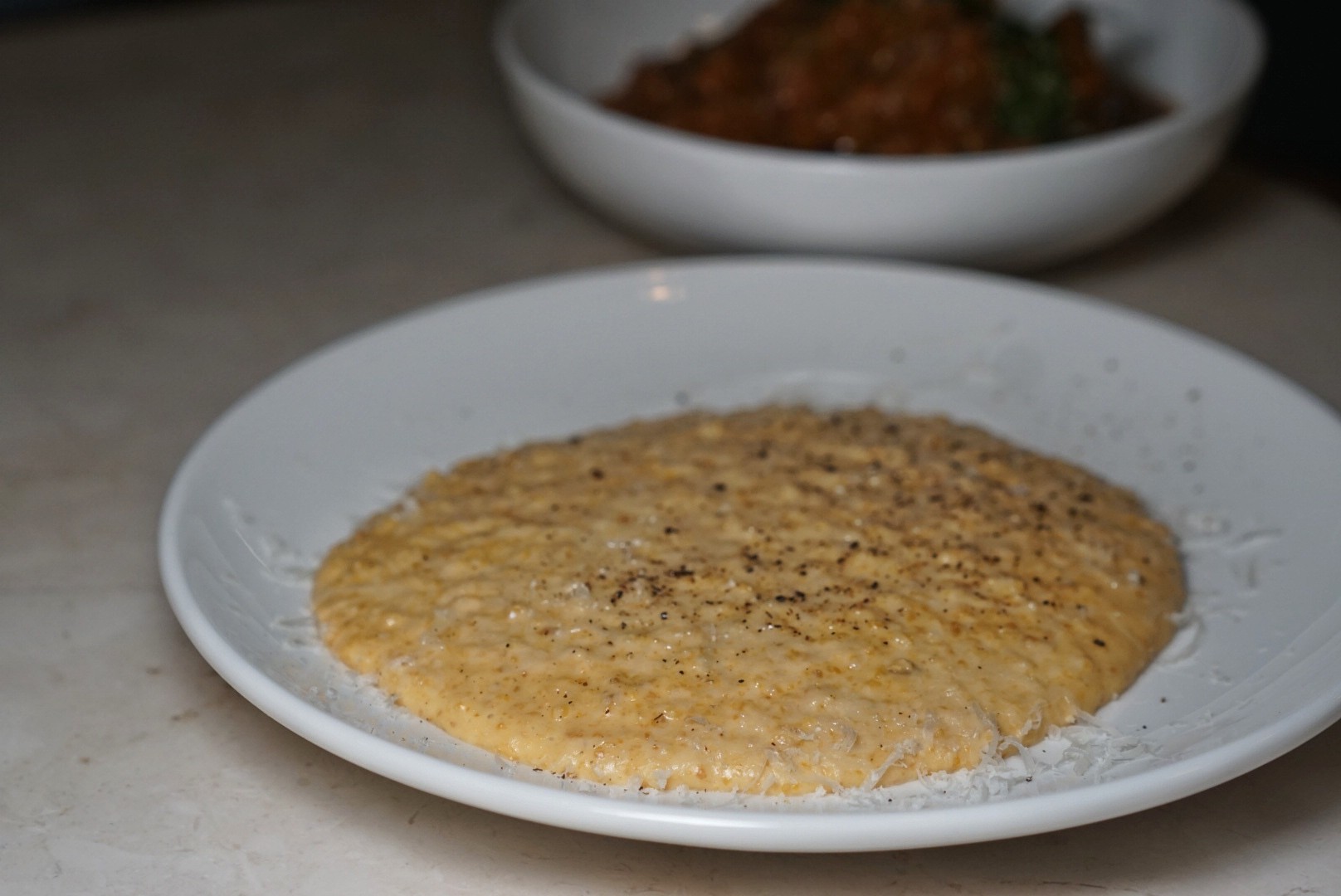 Humble in its origin, the Corn Polenta (RMB48) is a true labor of love – with half of the corn being dried for three days then slowly caramelized for a sweet, boldly ‘corny’ flavor (an obviously technical term, directly quoted by the chef himself), then ground together with softer corn typically used for congee.

The contrasting consistencies unite in a dense, almost gluey spoonful, peppered with chewy bits of kernel and parmesan cheese. Dessert is anything but an afterthought, with creamy koji rice-made Rice Pudding (RMB68), stewed with Shaoxing wine-soaked raisins and Yunnan black truffle. 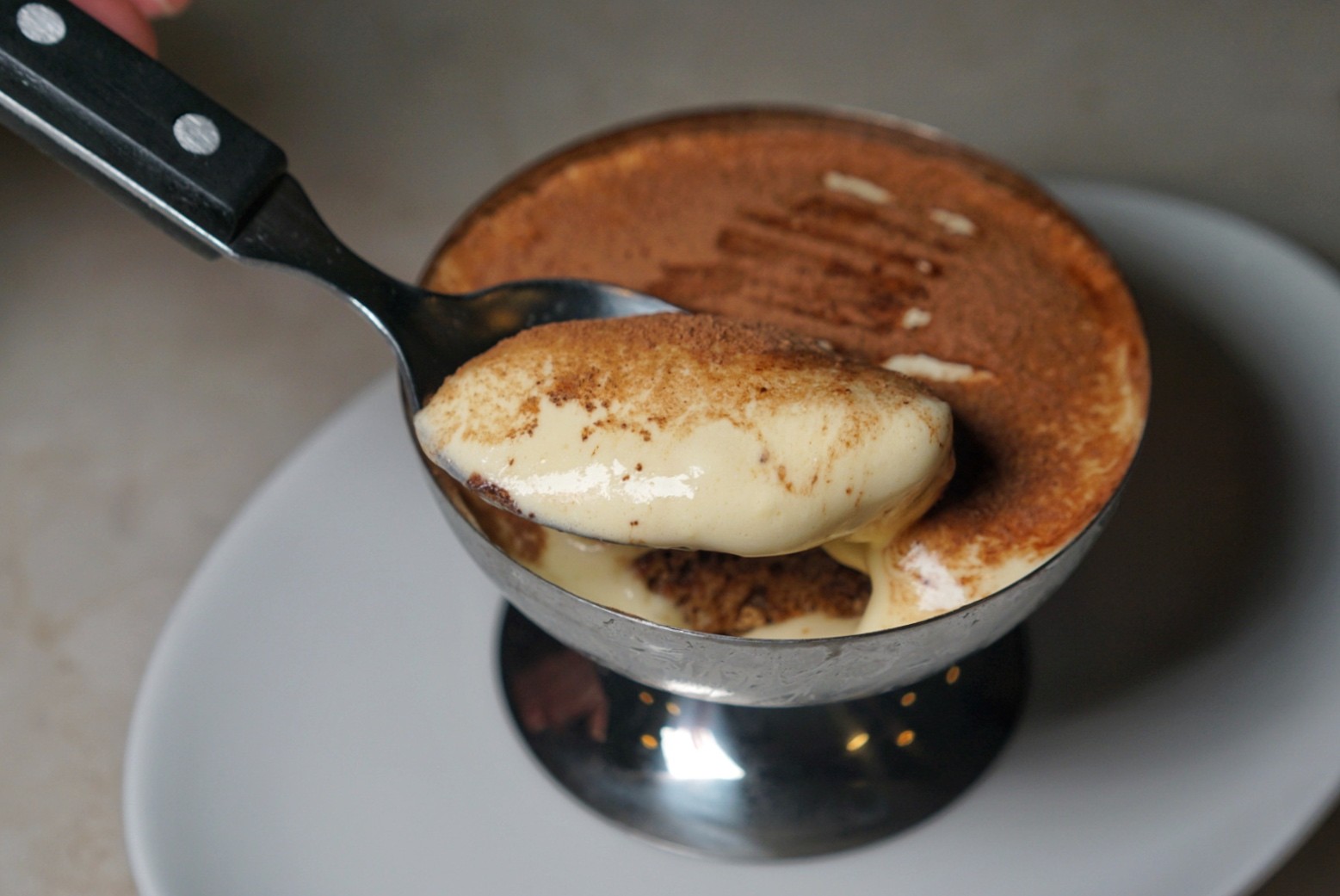 Miso-laced caramel is layered into whipped mascarpone, stacked on Ma Lai Koh sponge cake eaten for dim sum, for a play on a traditional Tiramisu (RMB78).

The restaurateurs’ goal is not to rush tables – shuffling guests through the menu frenetically and flipping them over for the next round.

Instead, this is place to hang out at, work your way through a completely distinct wine list, nibble on exceedingly whimsical dishes and feel like you’re with family.

(Literally, as your knee brushes up against the guest at the table next to you.) 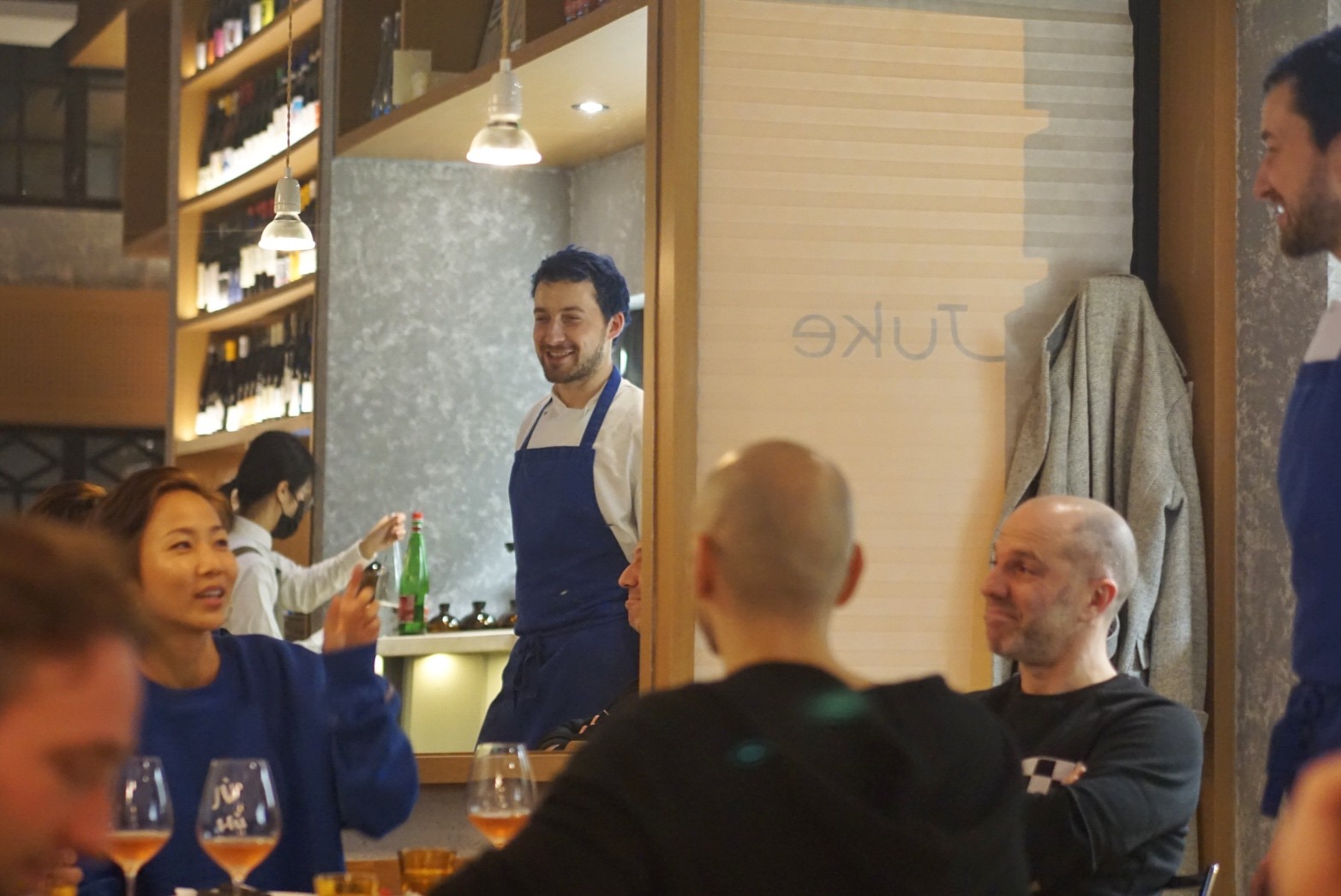 This is not a wine bar with the usual foie gras and mussels; the dishes you enjoy here aren’t something you will find elsewhere.

That emphasis on ingredient sourcing to plating comes through in the restaurant’s funky jazz accented atmosphere, making it the neighborhood neo bistro that it strives to be.

See a listing for Juke.