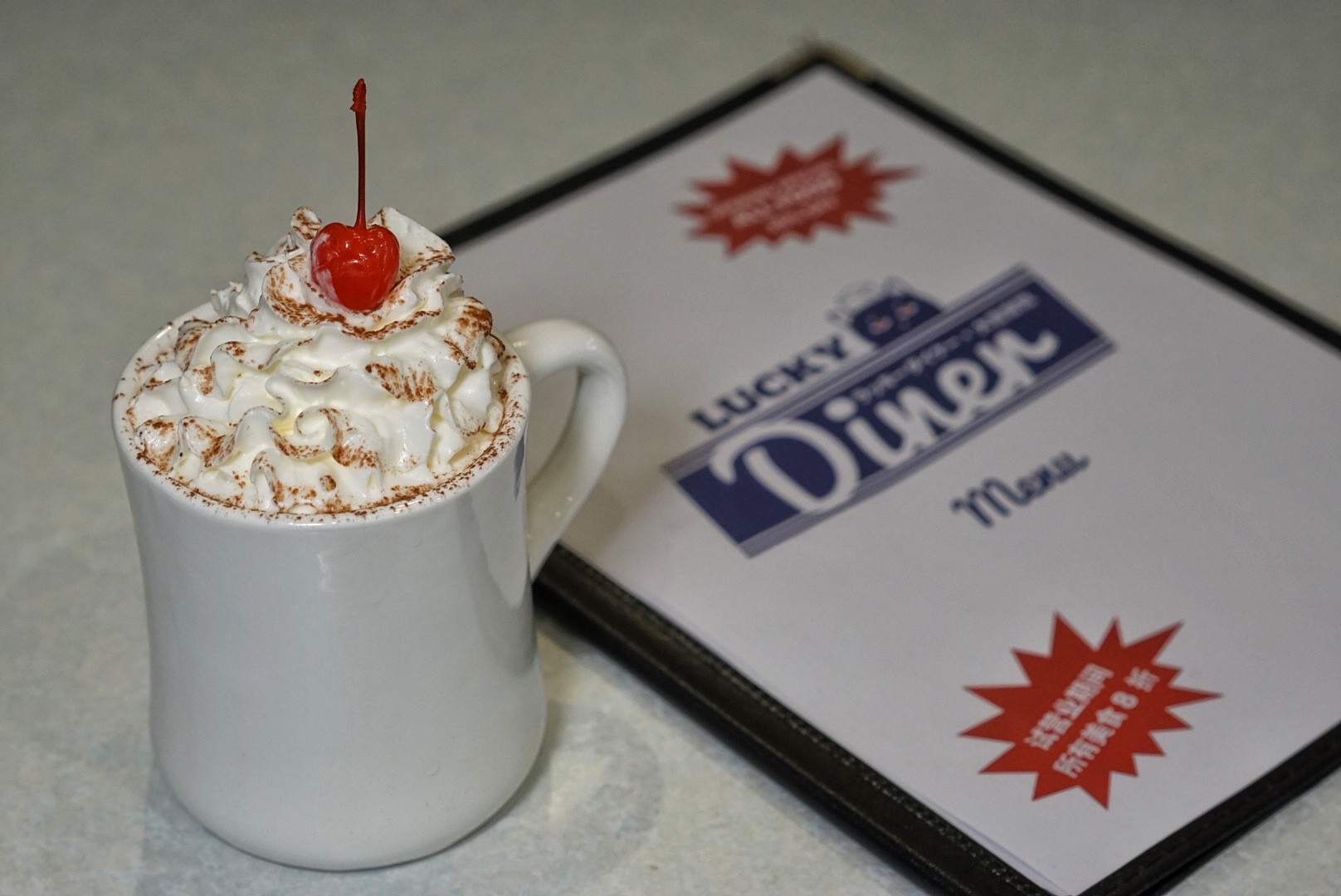 If small town middle America in the 1950s got mixed up in a time warp with a retro 1970s Tokyo diner, Lucky Diner would be its love child. The devil is in the details, and Lucky Diner nails each element; from the checkered floors and linoleum booths to the plastic laminated menus and pre-wrapped branded mints, it all screams Grease with a hint of Godzilla lore. 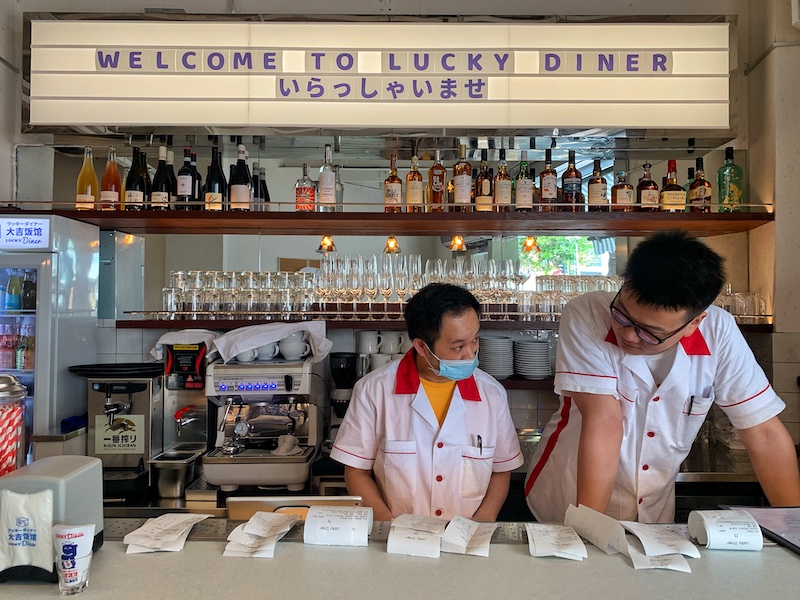 While this neighborhood eatery and konbini highball bar concept is still in soft opening, we are most excited about the evolving decoration plan. Owner Camden Hauge, (founder of Happy Place Hospitality Group, the team behind Egg, Bird, Bitter, La Matcha, Lucky Mart, Maiya Rice Canteen and, with the Camel Hospitality Group, KIN Urban Thai Kitchen) is asking friends to submit photos of their grandparents to adorn the walls.

Every time you eat there, you can guess which Shanghai foodie’s horn-rimmed glasses sporting grandma is in the picture frame above your table – a personalized touch highlighting the tightknit community, while paying homage to Japan’s fascination with that old school Americana vibe. 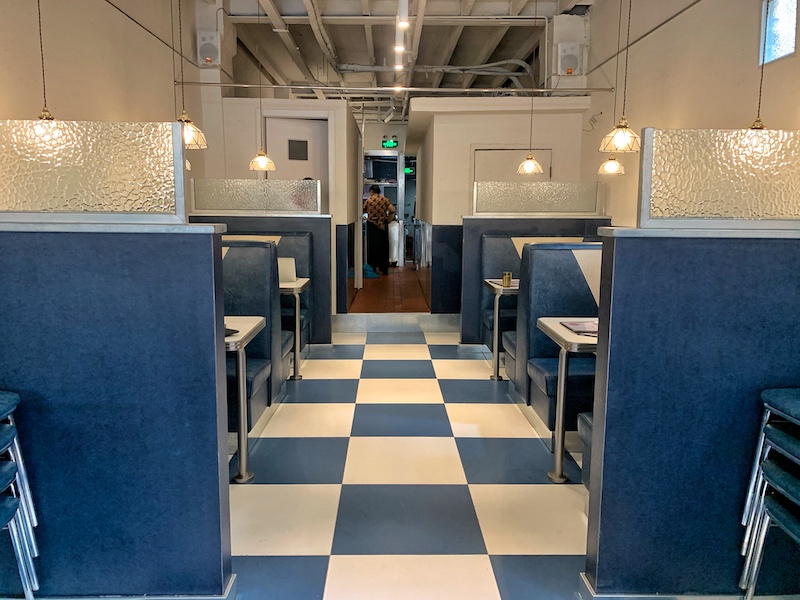 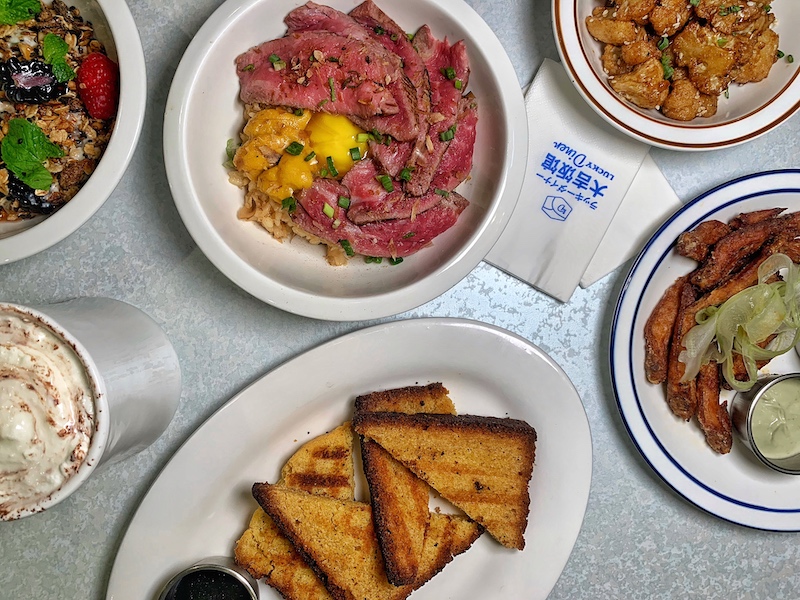 After the successful opening of Lucky Mart this past April, Lucky Diner expands on the same concept with all day, full service dining. The food is mostly a Japanese spin on timeless eatery options we all know and love. In addition to snacks, sandwiches and salads, Lucky Diner offers all day brunch, a mix of hot and cold mains and happy ending desserts to satisfy even the most particular sweet tooth.

The drinks menu is also quite expansive, with diner heavy hitters like coke floats and milk shakes, and konbini favorites like high balls, sake bloody marys and Japanese-Irish coffees. In line with other Happy Place Hospitality Group venues, the wine list includes an impressive spread of natural wine options as well as small-batch produced sakes. 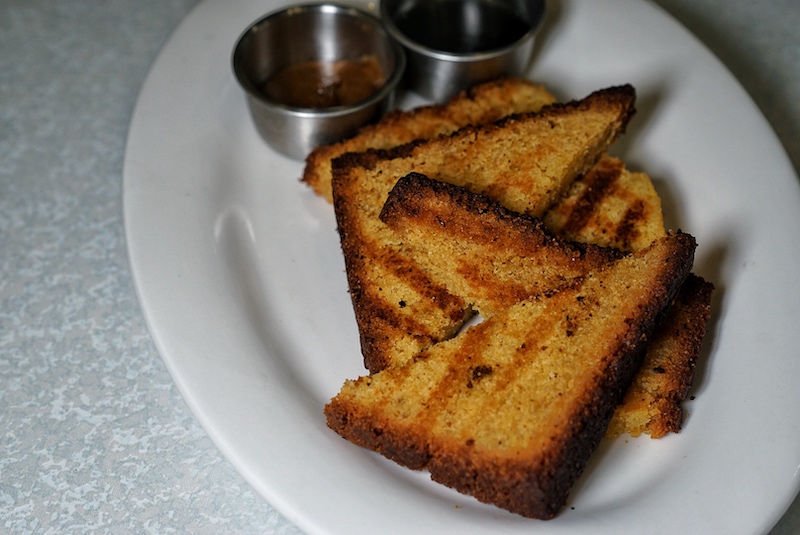 A proper order at Lucky Diner should always start with Buttermilk Cornbread (RMB38), four thick cut, crumbly toasted pieces of dense cornbread, best dipped simultaneously in the truffle honey and miso butter sauces it’s served with. Although a little over-charred this time around, we empathize with a newly opened kitchen still sorting what works best. 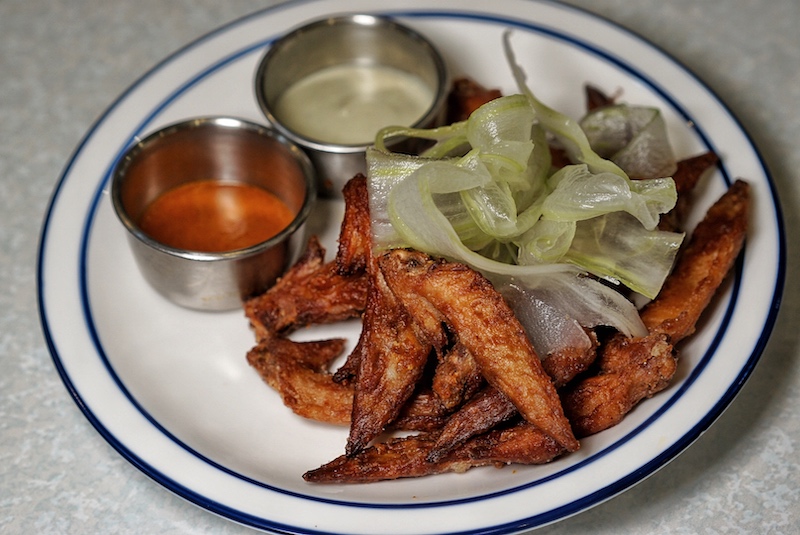 The Buffalo Wing Tips (RMB48) are the crispy end of the wing made for gnawing – an alternative to the usual meaty thigh portion. Although the wings are fried, the lack of breading means it’s not too greasy, also making it a feasible option for gluten free eaters. The cooling bleu cheese sauce is a welcome addition to the extra spicy buffalo sauce.

If you’re noticing a sauce trend here, that’s because Lucky Diner offers 15 unique sauces and dips to excite any palette. For just RMB5, add on your sauce of choice – like yuzu-miso aioli, charred eggplant puree, truffle ketchup or pimped Kewpie dressing – to elevate each dish. 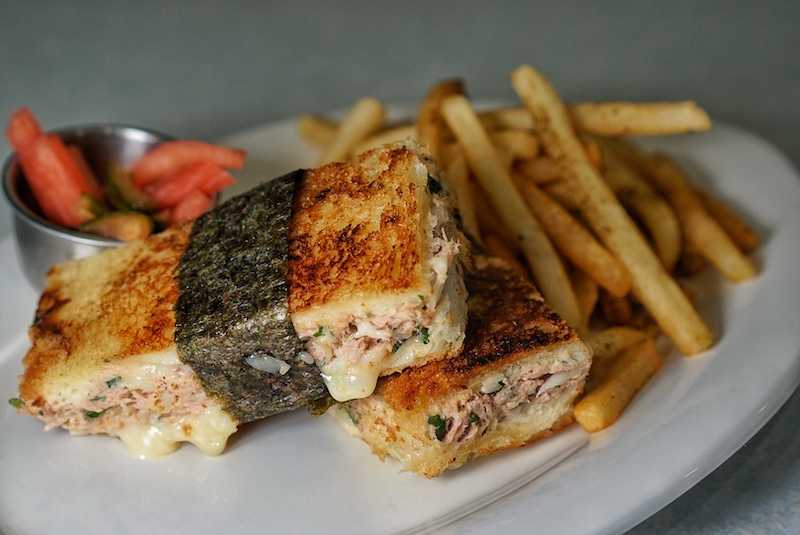 The Tuna Melt (RMB68) is a 10/10 bite of nostalgic joy. The buttery bread is effortlessly light, yet crispy and toasted, stuffed to the brim with creamy tuna salad and pull apart gooey melted white cheddar. Wrapped in a thin layer of seaweed and served alongside furikake seasoned fries and homemade pickles, the nod to Japanese flavors is welcomed without being distracting. 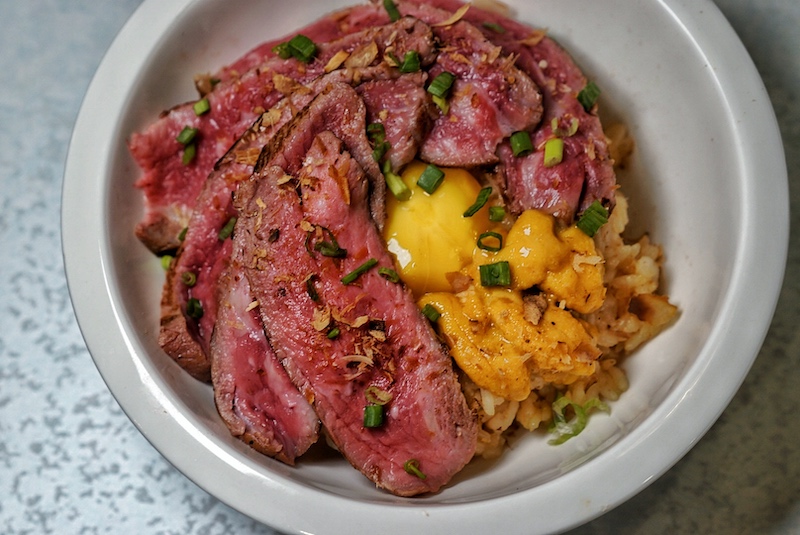 We loved the rich mix of umami sea urchin, creamy egg yolk, and savory beef in the Beef + Sea Urchin Donburi (RMB88), but the cut of the meat was unfortunately on the chewier side, and the texture of the rice was slightly mushy rather than the glistening sticky sushi rice we were hoping for. The addition of a sour or crunchy component (maybe some of those homemade pickled goodies served with the tuna melt?) could also kick this Japanese fan favorite up a notch. 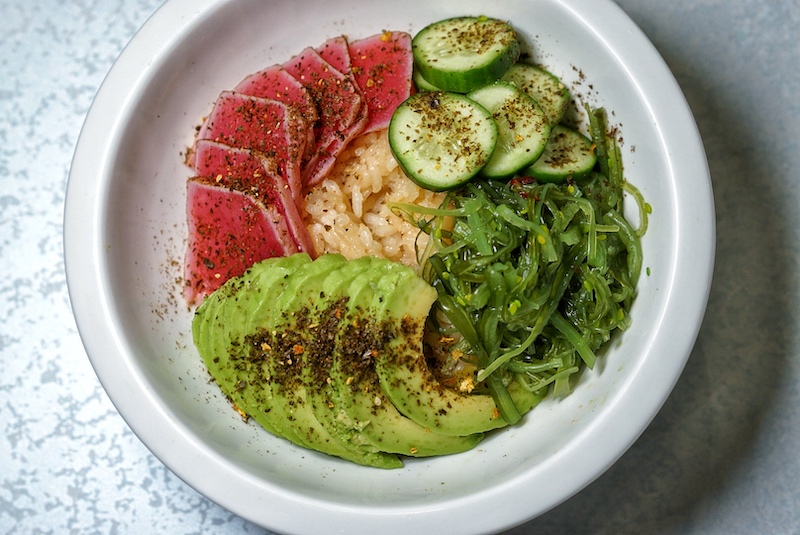 Similarly, we commend the chef for making his own furikake seasoning used in the Tuna Tataki Poke Bowl (RMB68), but an extra hit of citrus, sweetness or a sour punch could really round out the flavors. 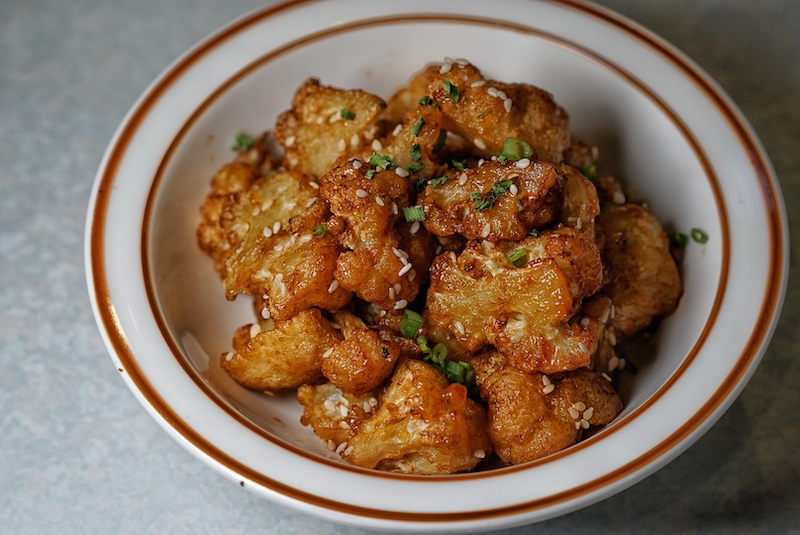 For a veggie side that counts towards your recommended five per day, the Roasted Cauliflower (RMB35) is a delectable option that appeals to the pickiest of eaters. Flash-fried and tossed in a sweet and sour sauce, this naughty alternative to sweet and sour chicken is addictingly crunchy and tangy, plus it’s vegetarian friendly! 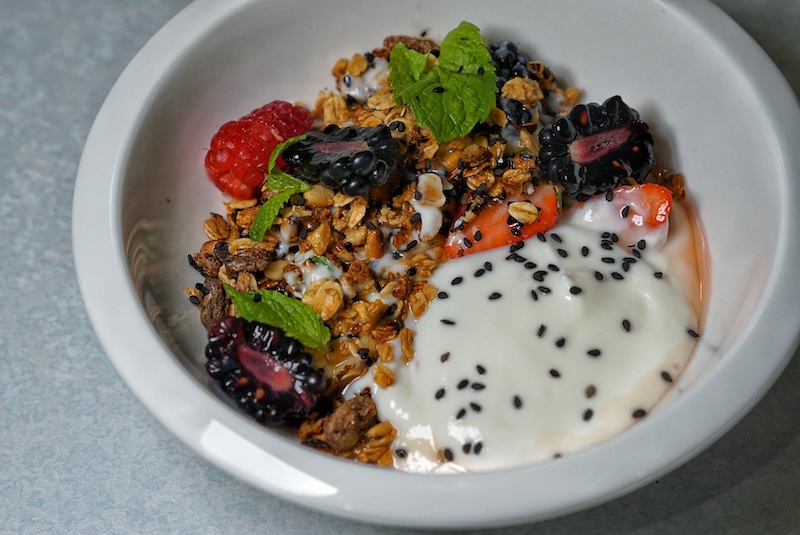 Ice cream suppliers were still being sorted at the time of our visit, and a few of the desserts are pending until grand opening, no diner meal is complete without a sweet finish. The Black Sesame Granola (RMB48) may sound run of the mill, but with a slightly tart homemade yogurt base, crunchy black sesame granola, assorted dried fruits and juicy fresh berries, we licked the bowl clean.

However, there is no force powerful enough on earth to stop us from returning to taste the Lucky Neapolitan Banana Split (RMB88), a funky twist on the most iconic, nostalgia-inducing diner dessert made up of matcha, red bean and black sesame ice cream scoops atop a banana, drizzled with miso caramel, sakura syrup and sprinkled with ramen krispies. 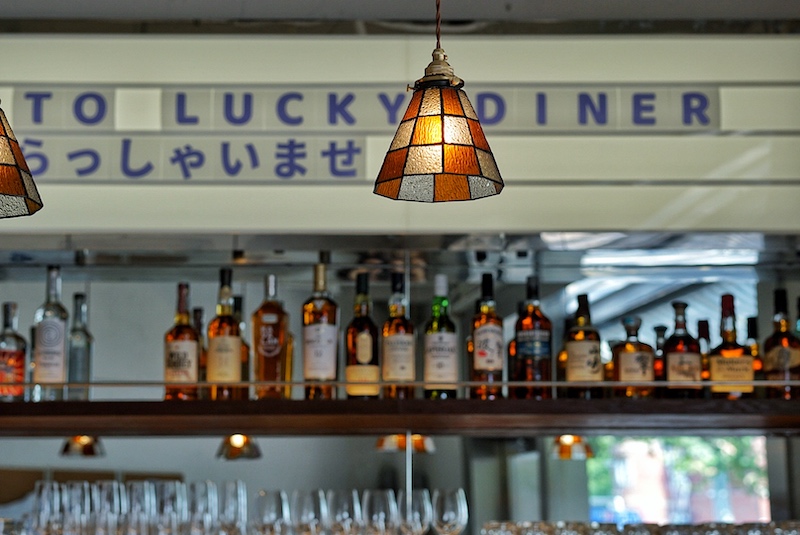 The vintage décor coupled with the soon-to-come decorative elements allow patrons to reminisce in childhood comforts, long since replaced by modern restaurant concepts and the newest, hippest bars. With Japanese-dubbed 1950s jams playing on the sound system and plenty of liquor options to suit all sorts of friendly gatherings or casual date vibes, we can see ourselves hanging out here late into the night – a spread of half drank spiked matcha milkshakes, sake based bloody marys, a table full of house highball glasses all interspersed with remnants of furikake crisps adorning the table in front of us.