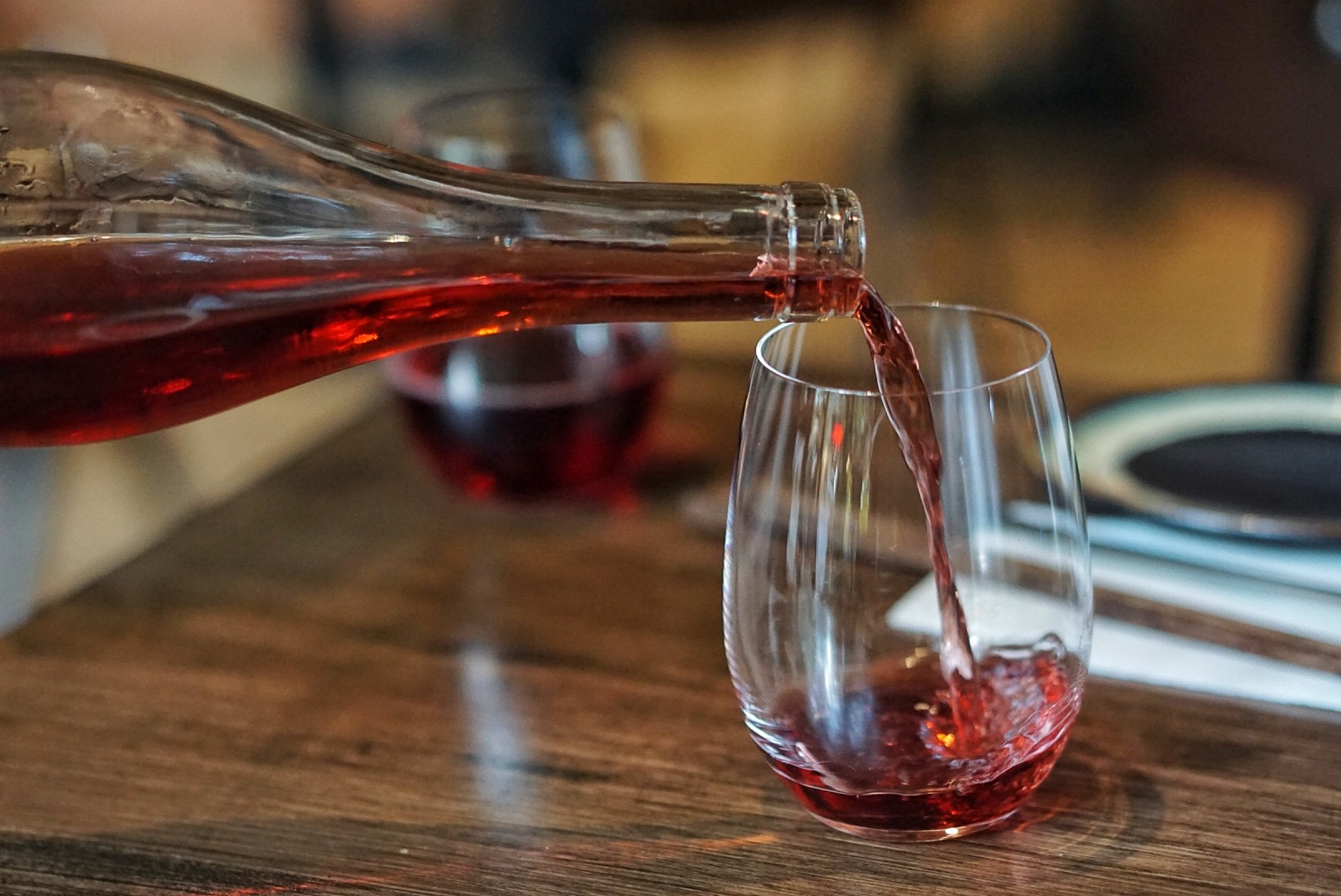 Coming from a background of high-end kitchens (including Ultraviolet and Maison Lemolaise), the hodge-podge group of friends aim to create a funky wine bar that is unabashedly independent, with the main goal of doing something niche and purely experimental – the kind of place they themselves would choose to hang at. 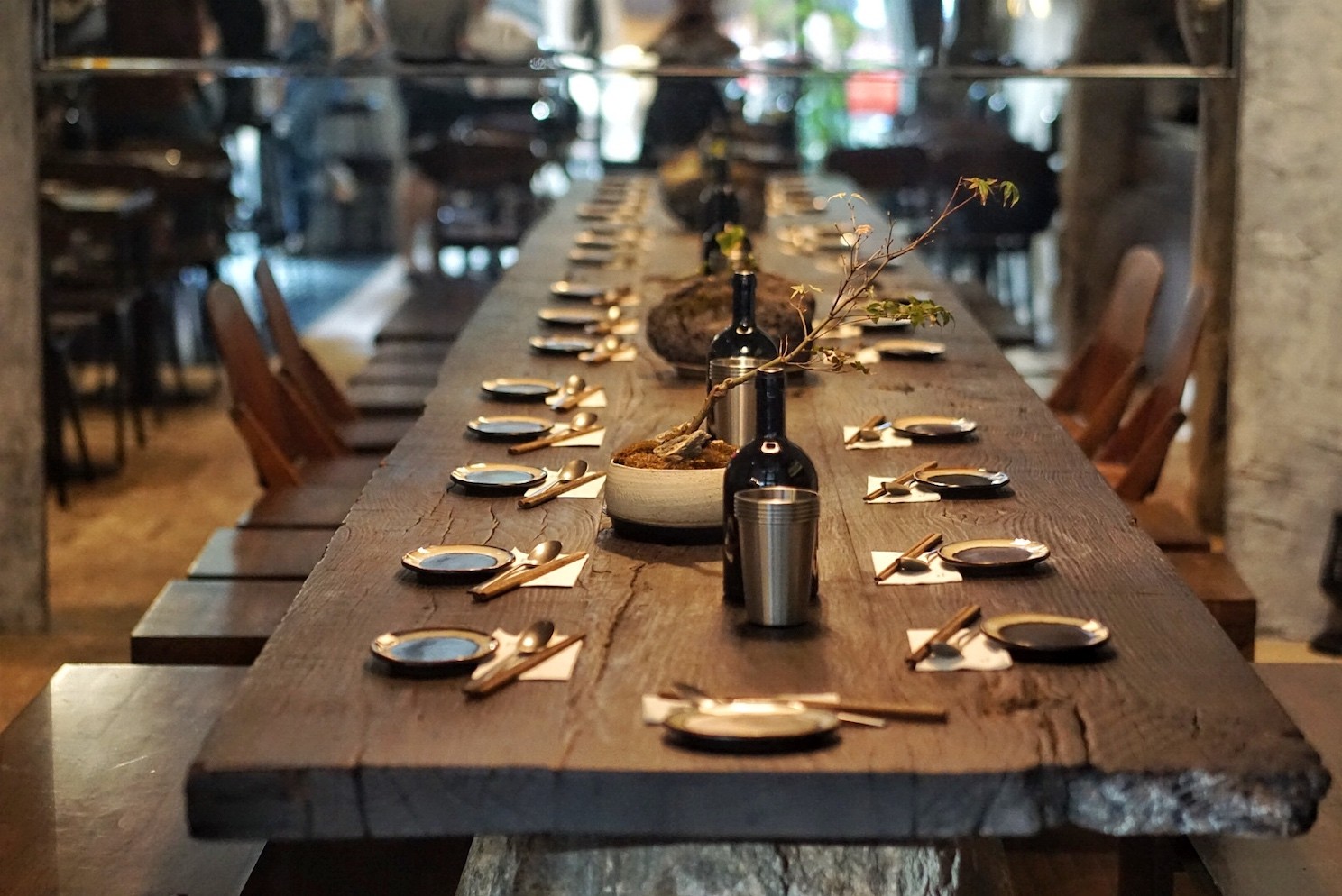 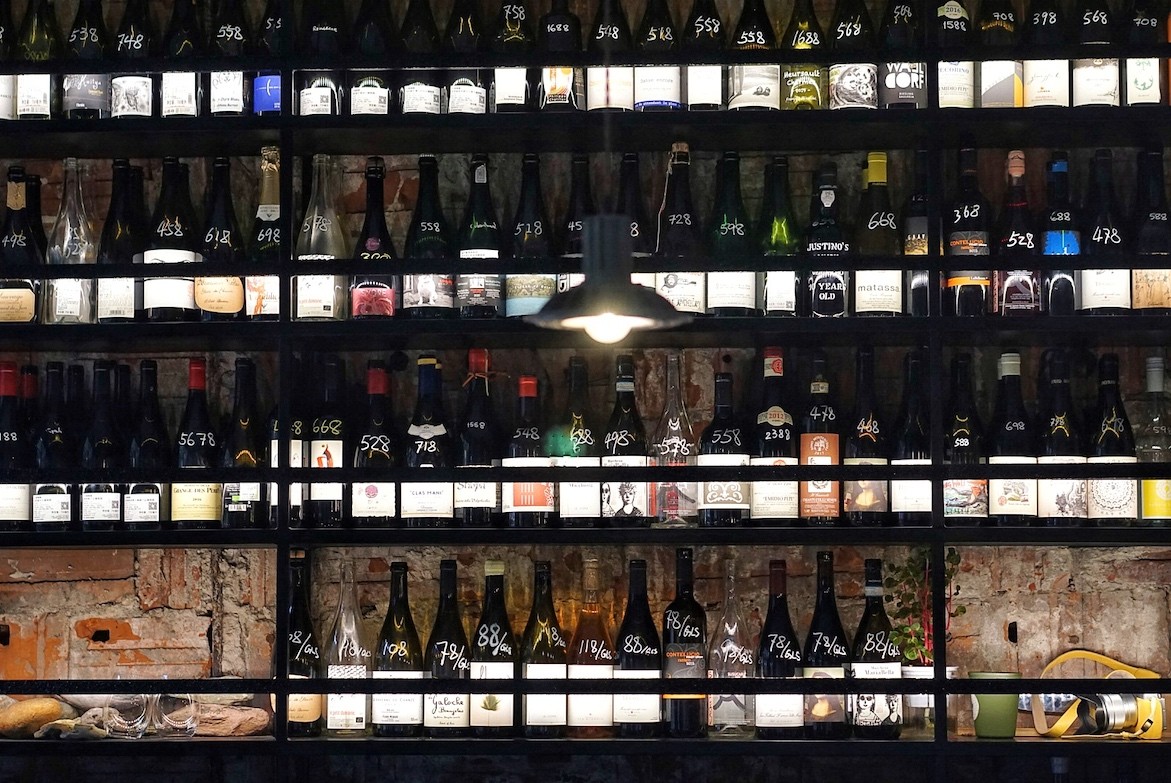 “We’re wine geeks, doing stuff for the other weirdos that get it. And if you don’t, then go to any other mainstream wine bar in the city. Shanghai’s got plenty,” says Jiang, while simultaneously pouring a Sicilian natural rose, ruby in color, dry and crisp. 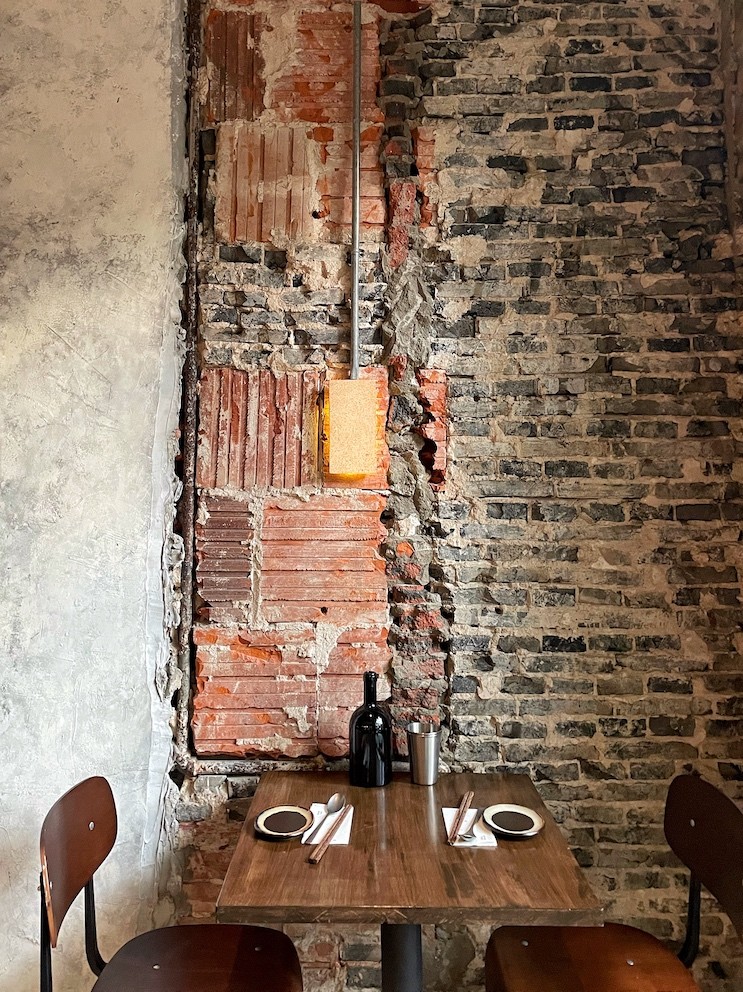 The Maoming Lu digs used to be a clothing shop, and the team decided to leverage that unfinished, shabby chic appeal of the old building when completing the design and construction themselves.

The bar is from a stone pit outside of Hangzhou, the ceramic plates are hand-selected from Jingdezhen, the upcycled wood tables, plants and decorative elements are repurposed from bits and bobs found around the city – living up to the restaurant’s foraging name.

The wine program is the focus, designed by William Zhu to show his attitude towards the nectar of the gods – clean on the palette, well-made and interesting in regards to winemaker, region or flavor. Expect to choose from 200 bottles at any given time, ranging in price of RMB400-800 per bottle and RMB70-110 per glass.

Drinks aren’t limited to just wine. You’ll find trendy sour beers, honey mead and ciders, fitting into their loosely structured plan of ‘we don’t care what it is, as long as it’s exciting and tastes damn good.’ Textbook chicken liver paté is served in the Jill Jar (RMB78), studded with potato cubes and soaked raisins. A tart green plum jam threads its way through the mousse, cutting through the creamy fat and rich minerality. 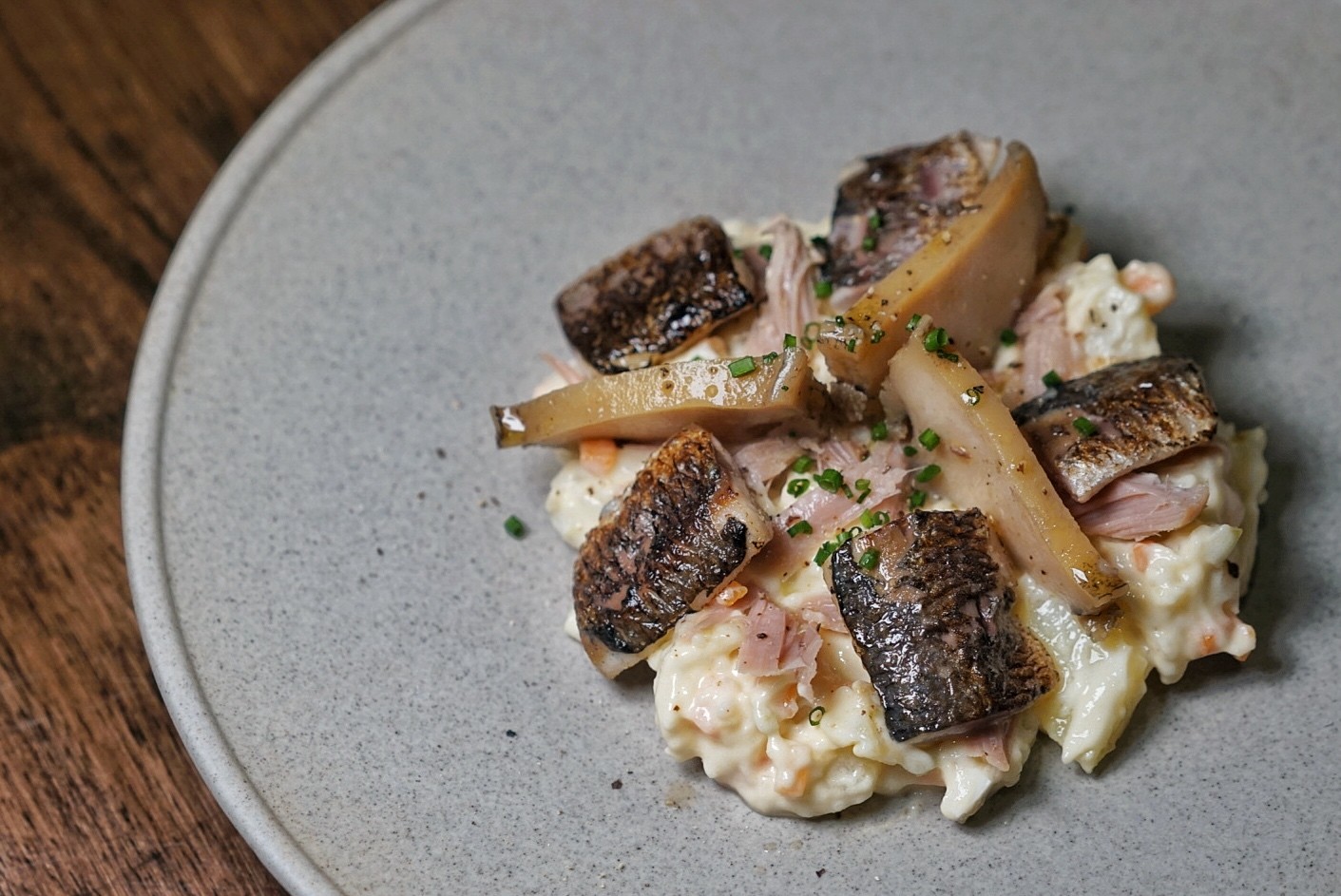 A seafood-forward rendition of middle America Potato Salad (RMB58) is studded with flecks of tuna meat, slabs of sardine and soy-marinated, springy abalone. While the potato salad on its own lacks seasoning, when mixed together the ocean brine brings balance. But not necessarily enough to make us cry out for another helping. 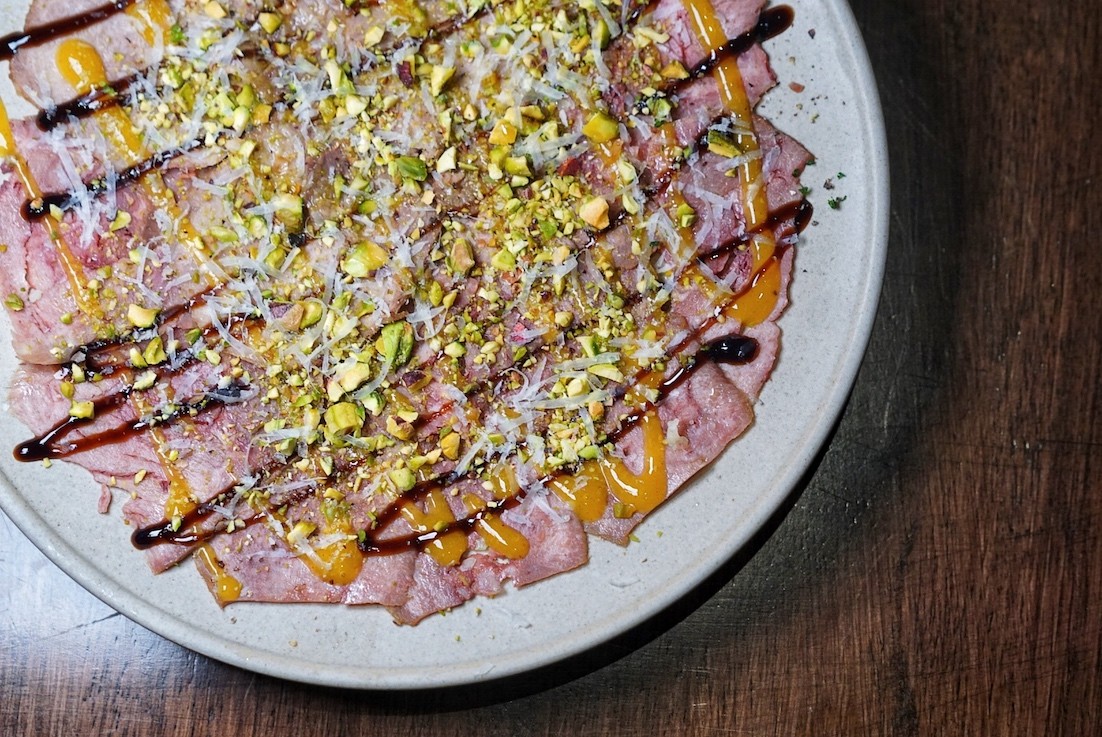 An unlikely choice for classic carpaccio, the Ox Tongue (RMB68) is drizzled with mango purée and balsamic vinaigrette, while a liberal sprinkle of crushed pistachio and shaved parmesan coat the top.

The initial balance of sweet and tart blossom into a punchy, salty finish of fat-laden meat. Simple yet distinct, the adventurous choice of ox tongue stands up to the bolder toppings, making a customarily more mundane dish stand out. Delicately soft oysters act as the base of the Tartare (RMB78), studded with flecks of 5J ham, shallots, homemade cucumber pickles and puffed rice for added crunch. Sitting in a shallow ajo blanco bath – made from garlic and almonds – the dill oil-speckled sauce is the hero that brings together the predominant brine and bright herbaceousness. We applaud the unique take on a tartar, but the subtle flavors are easily overpowered by most audacious wines on offer. Hailing from Yunnan, seasonal porcini mushrooms, or Boletus (RMB108), are confit with olive oil, then roasted before serving, topped with a clear onion jus, oloroso sherry and a gooey egg yolk, forming an umami mushroom bomb of a bite.

These confident opening appetizers scream, “This is who we are; take it or leave it.” Similarly jarring flavors and whimsical ideas dart in and out of the offerings, some (the former) faring better than others (the latter). 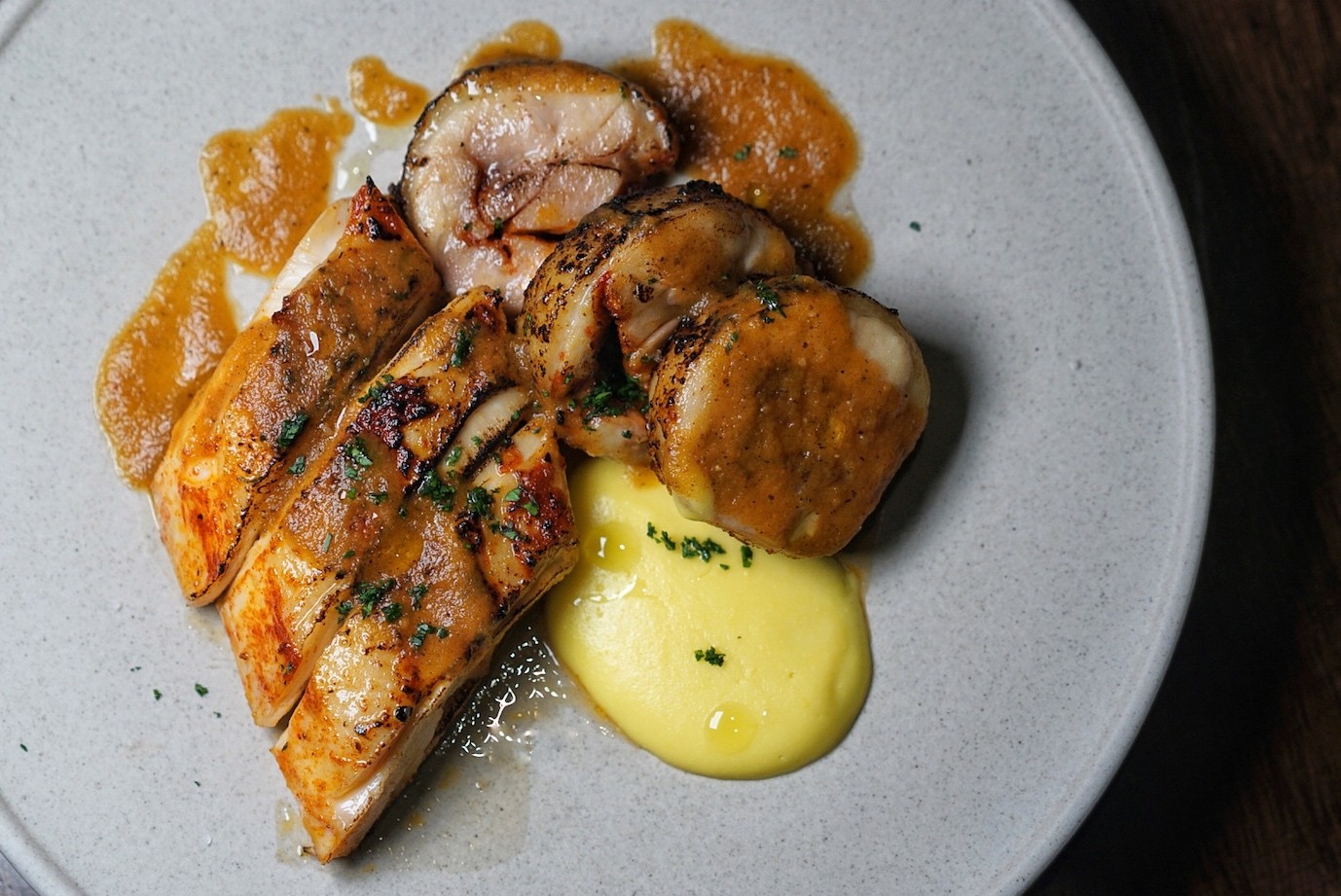 Saggy skin surrounds the half-breast, half-thigh pinwheels of Free-range Chicken (RMB128) rather than the taut, crispy chew we long for. As the thigh meat is juicy, the breast is grainy – a texture we don’t associate well with fowl – but the sweet corn mousse and chipotle chili sauce almost make the plate redeemable.

And then we remembered the price and compared it to the portion... hopefully it will align better in the future, as they bulk up orders and continue to find more reliable suppliers. 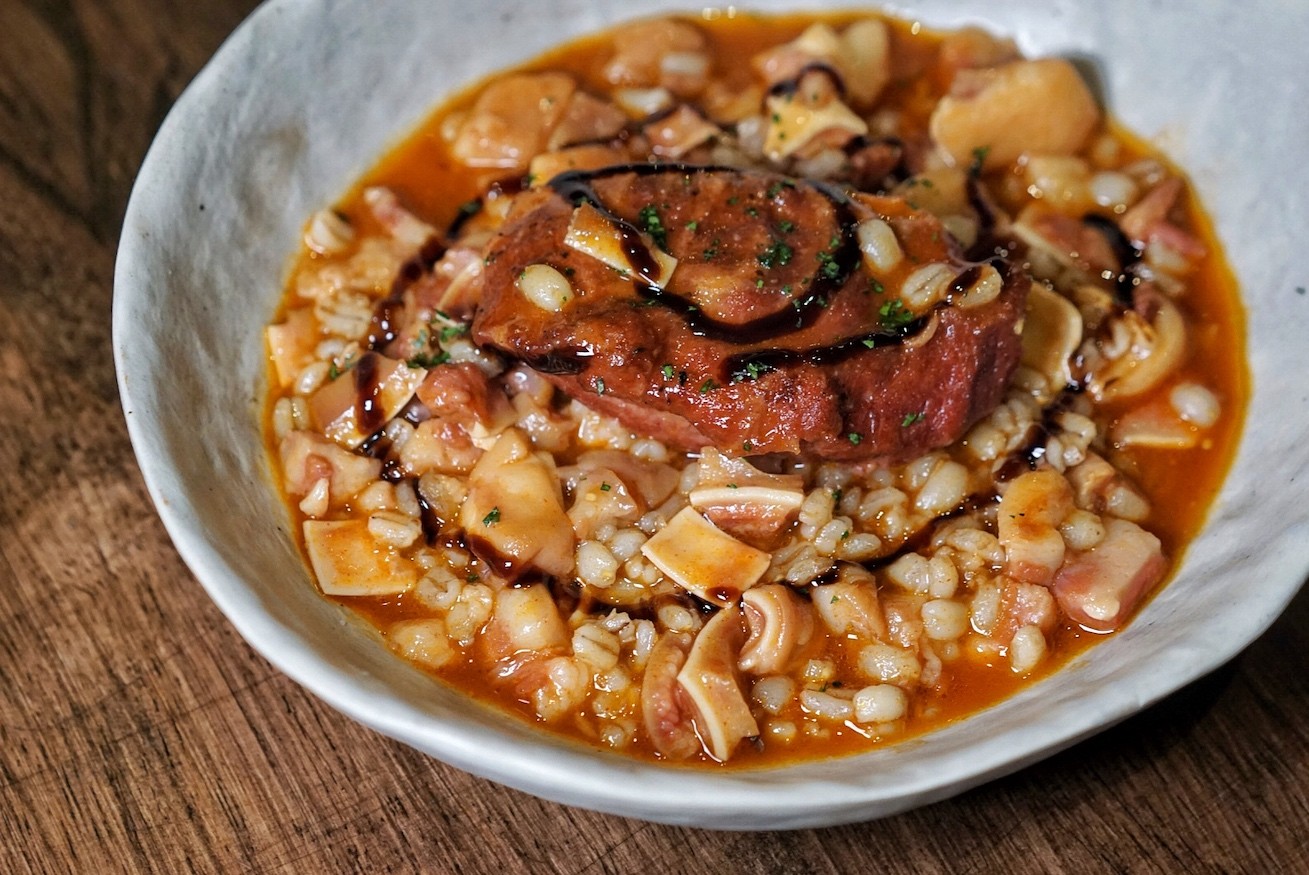 The tender William Iberian Pork Cheek (RMB78) shreds apart easily into an earthy barley kernel stew, but the egregious lack of seasoning and confusing inclusion of gelatinous, crunchy-cored pig ears detract from the lusciousness of the broth. 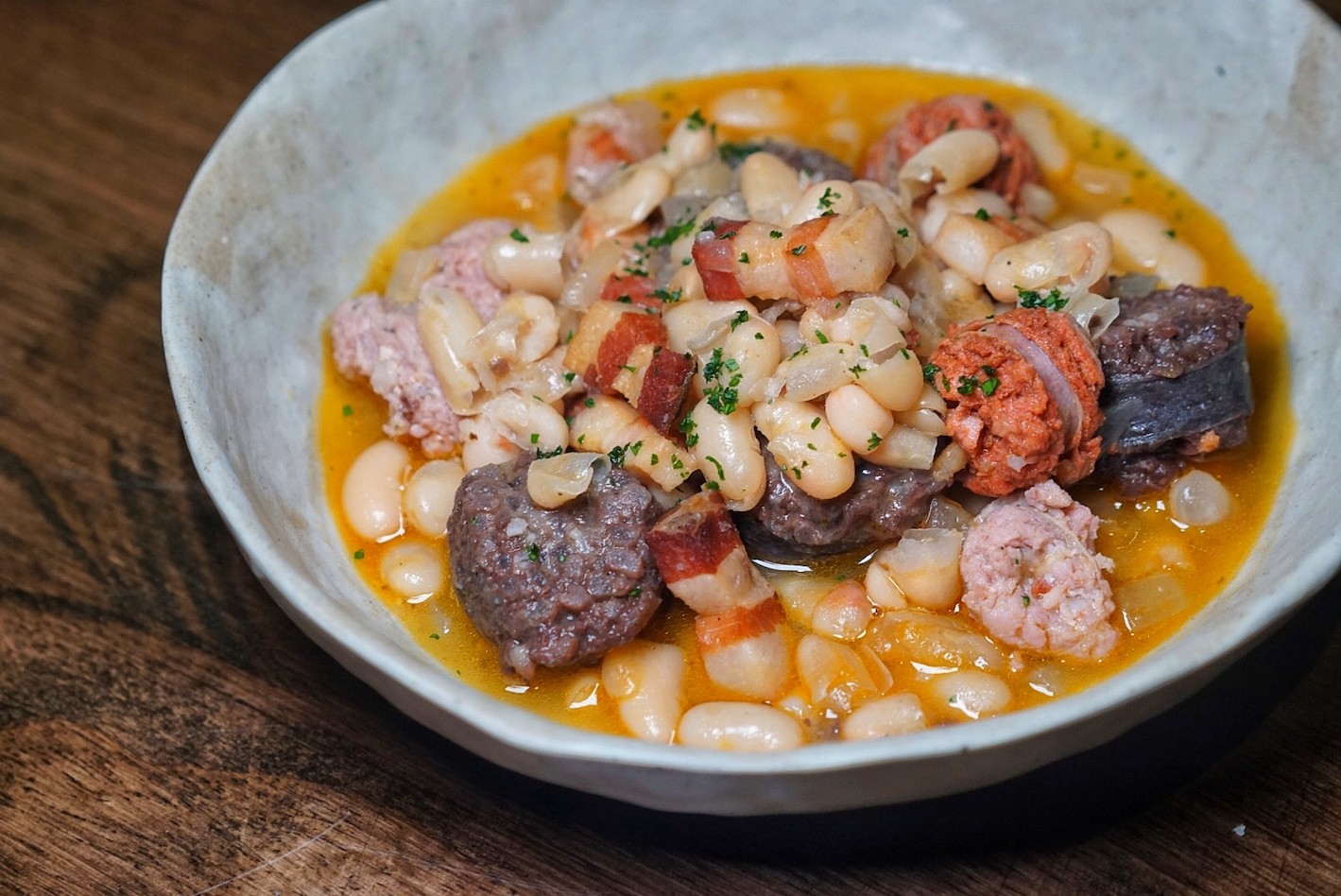 Another rustic stew of sorts, this time made of Alubia (RMB78) – similar to a white bean – plus three types of sausage, mimics a Spanish-Moroccan cassoulet. The morcilla blood sausage is sublime – meltingly creamy, slightly metallic in an ultra-savory way.

The accompanying chorizo and botifarra sausages, however, are the polar opposite – grainy, bland and over-cooked. Equally upsetting, the slivers of pancetta have unrendered, rubbery fat rather than the slow-cooked melt and crisp char we dream of. The only sweet offering, Xiao Gao (RMB58), is quite possibly the most successful fusion of two cuisines found on the menu, enhancing the plate into something more intriguing. Spanish arroz con leche is made with chopped nibbles of Chinese niangao, or rice cakes, dotted with crushed pistachios and a quenelle of palate cleansing raspberry sorbet. The thickened pudding is spiced with cinnamon and a sweet local pinecone syrup made in-house, resulting in a plate that really showcases the chefs mixed roots.

Shanghai sees many a place that finds a good business model and just hits copy+paste over and over again. There’s nothing wrong with that. But Forage wants to be the opposite, and it’s not easy to go against tradition – reinventing the wheel to try to do something different and leave a mark.

For that, we commend them. The thought-provoking ideas are there, but this early in the game, the ingenuity unfortunately doesn’t always equate to delicious bites. There’s forthright character coupled with a lively, buzzing and downright hip energy, but execution is still a pain point (which we understand and respect as it’s still normal in soft opening).

Originality, honesty and quality are the goal, and they are overall achieving that, especially for a restaurant that’s been operating for less than two months. But, at the end of the day, would we choose Forage over other fine-tuned wine bar favorites like SOiF, Bar À Vin or Cellar to Table?

Probably not, for now. 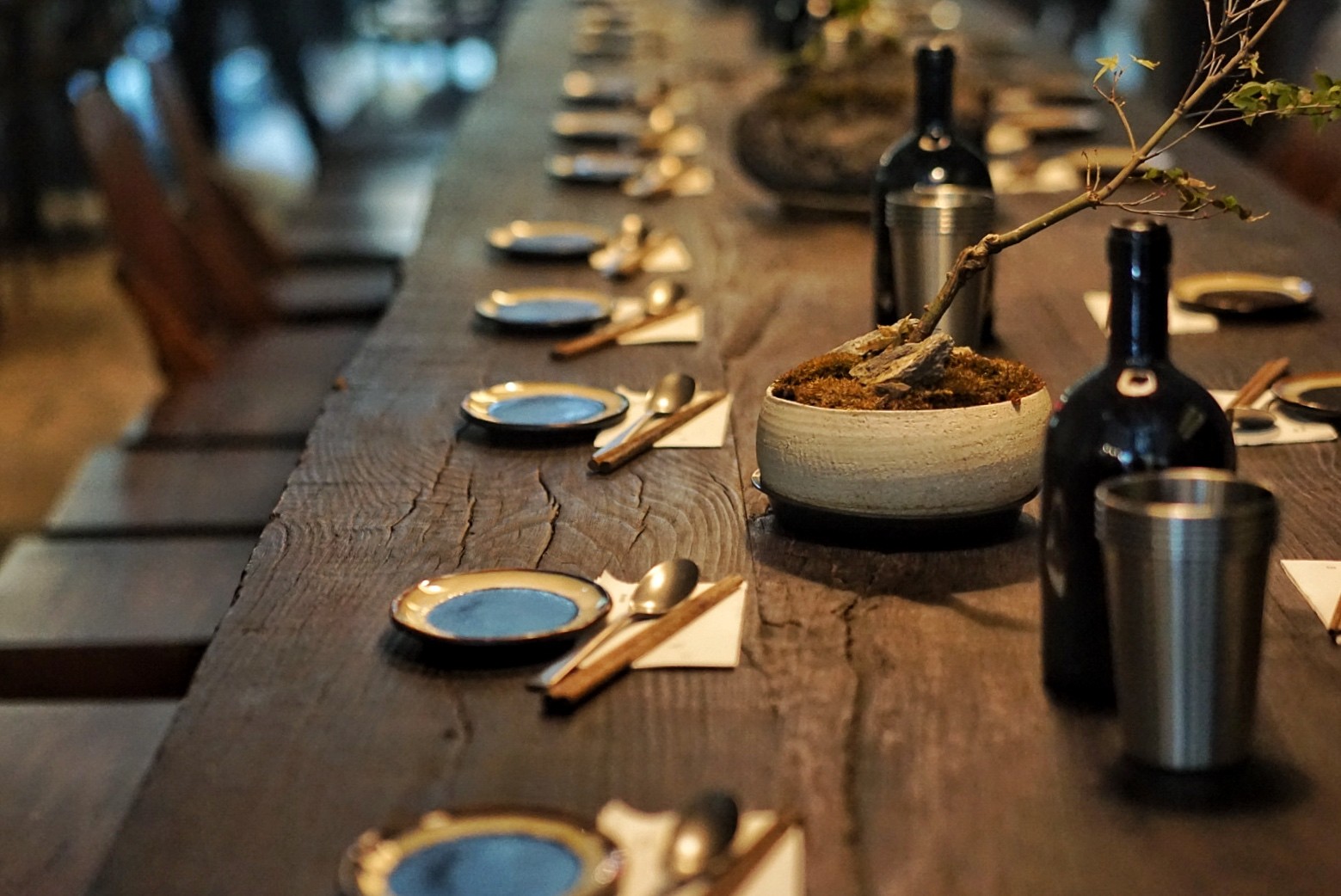 Yet, the potential is there. The creativity, heart and passion are there. This place is doing cool things well and will continue to remain busy and fun for the foreseeable future. It deserves that as it comes into its own during this soft opening time, which is specifically designed for just that.

All things considered, we will most definitely return after a few more menu iterations have been worked through.