Skin and bones, shriveled and covered in sores, were all that remained of nine-year-old Wang Zhiqiang when he was found at a "Relief Station" in Xinyang, Henan Province.

Wang weighed over 45 kilograms when he disappeared about half a year ago. On October 2, he left home and never returned; his parents went to the police two days later and had been searching for their son since, with no success.

On April 22, Zhiqiang's father Xinhong spotted a story in the Xinyang Daily newspaper saying that a young boy had died in a local shelter and, fearing the worst, went to see if he could identify the body - something he could barely do considering the wretched state his son died in. 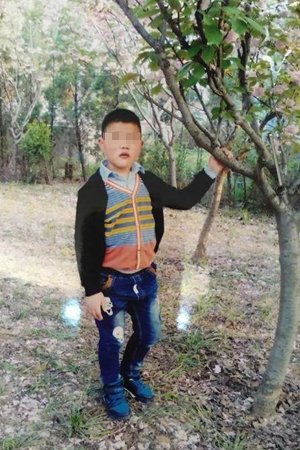 To see pictures of Wang's remains that his family offered to the press [WARNING: Very disturbing] click here.

Nothing more is known presently about how Zhiqiang ended up at the shelter or how he could have died such an inhumane death there. When one employee was on the verge of telling reporters what happens, a colleague cut in and said that their section chief wasn't in and they couldn't say anything until he was back.

This isn't the first time that China's state-operated homeless shelters have faced criticism. Last December, shocking images emerged of another Relief Station in Henan where mentally ill residents were tied to trees and rotting corpses were left in the open.

Relief Stations are a nationwide network of state-run shelters intended to aid beggars and vagrants. The centers are charged with providing suitable food, basic accommodation, emergency medical care, and help contacting people's families or work units and bringing them back home.

Following the infamous Sun Zhigang Case in 2003, Relief Stations were established to replace the decades-old "Custody and Repatriation" system, which allowed local authorities to detain anyone with a non-local residence permit for indefinite amounts of time.

Detainees were often exploited as unpaid labor or ransomed off to relatives before being shipped back to wherever they came from. They became, however briefly, slaves and hostages of their own government.

In March 2003, a 27-year-old university graduate from Hubei Province called Sun Zhigang came down to Guangzhou to take up a job offer as a designer. Since he didn't yet possess a Guangdong residence permit, however, Sun was detained as he entered the southern manufacturing hub and held at a Custody and Repatriation Center — there, he was savagely beaten to death for no reason other than arguing against his detention.

Following a national outcry, the Custody and Repatriation system was abolished by June that year and what were once detention centers became "Relief Stations," tasked with helping rather than exploiting the less fortunate.

Judging by last December's case and the images we have seen today, however, nothing has changed except their names. The no-frills Chinese hotel made out of an old concrete pipe. Dig from Formosa, to Formosa (well, and the core of the earth).

Do drinking contests encourage drinking too much? (Answer: Yes)

No one wants to take credit for knocking down female demonstrator.