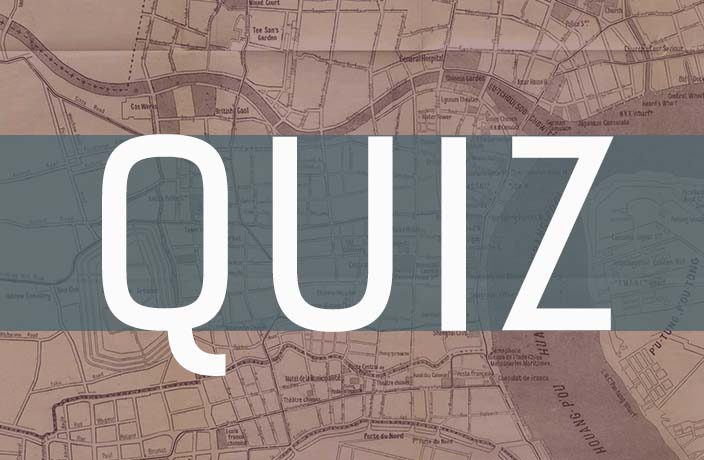 Story teller Charles de Lint once wrote, “When all is said and done, all roads lead to the same end; so it’s not so much which road you take, as how you take it.” But have you heard that a road by any other name smells just as sweet?

Back in the day, the Shanghai streets listed below were known by another title. Think you can recognize the former fairways? Test your wits by matching the old and new Lu’s with our quiz. Turn your VPN on to take the interactive quiz:

Is the above quiz widget not loading? You can also take the test below...

1. Hart Road, which runs through current day Jing'an district, was named after British Inspector-General Sir Robert Hart. What is it known as today?

2. Broadway was the name of this street, which ran through present day Hongkou district.

3. Rue Lafayette, which ran through what is now known as the Former French Concession, was known as Fahwah Road in 1914 and renamed after an American revolutionary general in 1918. Today, this is its name...

4. This major road was named "Avenue Joffre" in 1915 to honor the French general Joseph Joffre. What is it called today?

5. Astor Road was home to the famous Astor House Hotel in Hongkou. These days we know it as what?

6. Route Cardinal Mercier ran through the present day Former French Concession. What is it called today?

7. Bubbling Well Road was a more practical name for this street, on which you could literally find a bubbling water spring near a major temple that still exists today.

8. Columbia Road housed the famous Columbia Country Club, which was turned into an internment camp during the Japanese occupation. What is the road known as today?

9. Blvd des Deux Republiques (literally "Boulevard of the Two Republics") served as the boundary between the Chinese city and the French Concession in the early 20th century. It eventually became known as what?

10. Built in early 1914, Seymour Road was home to the Ohel Rachel Synagogue, which served as the center for nearly 20,000 Jewish refugees who fled Europe during World War II. These days, what is it known as?

11. Love Lane was a fun spot for partygoers in the 1920s and 30s with its vibrant bar strip. The place to be seen here was St. Anna's Ballroom. What is it known as today?

12. Great Western Road was a major thoroughfare running out of the settlement and towards the western suburbs. What is it called these days?

13. Amherst Avenue was home to Empire of the Sun author J.G. Ballard for part of his time in Shanghai. Today, we know it as...

14. This street in the heart of the French Concession was originally known as Route Paul Henry. What is it called today?

15. Avenue Petain was the epicenter of the expatriate community, with many American organizations setting up establishments there. What is it called these days?

16. Ferguson Road was named after American missionary John Calvin Ferguson, who was sent to China in the early 20th Century. These days we know it as...

0-3: Bu hao, my friend! You could do with a lot more brushing up on your Shanghai history.

4-8: You've got some of the Shanghai history basics down, but you've still got a ways to go. Check out Paul French's The Old Shanghai A-Z to brush up on your city history.

9-13: Bu cuo — not bad. You've got a decent knowledge of Shanghai history that just might come in handy during one night at pub quiz.

14-16: You're a certified Zhongguotong, or should we say "Shanghaitong"? You're a massive Shanghai history nerd who seems to know this city like the back of your hand. You could probably hold a walking tour of this city if you wanted to.