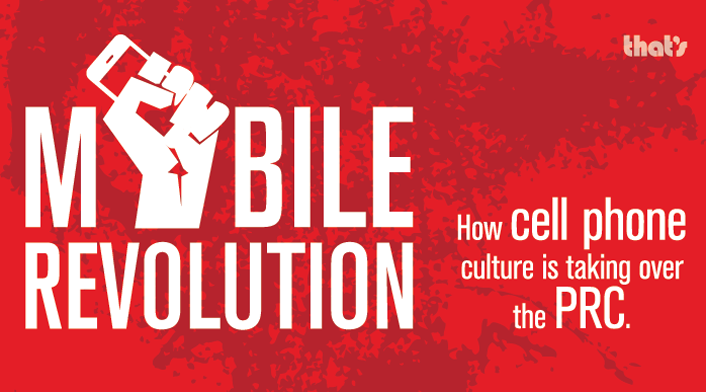 In the June Issue of That's Shanghai and That's PRD, we've looked at how cellphone culture has taken over China. In the first of this five-part series, we look at social commerce. Read about modern mobile phone culture here, China's most popular apps here, a history of mobile phones here and an infographic on apps here.

"Social commerce” sounds like an internet buzzword, concocted in one of those brightly-colored Silicon Valley offices by a dot-com worker at his standing desk. Buzzy it may be, but social commerce is a big deal – the term involves, in one way or another, 90 percent of all consumer purchases today.

To the uninitiated, here’s how it works: Mr. Wang buys toilet paper, multi-vitamin tablets and a bottle of baijiu on Tmall, one of China’s largest online retailers. Once he gets his order, he snaps a picture of each item on his phone and posts them on Tmall’s product detail page, which features a forum where people can rate what they bought, post questions, discuss topics and compare their retail experience. Anyone who is interested in buying can see Mr. Wang’s scores and comments.

None of this is breaking news – sites like Amazon have had “user review” sections for ages – but now, they are having a real effect on the business side of things. By analyzing Mr. Wang and his co-consumers’ comments, Tmall (and any other company following this model) can aim its retail strategy in one direction or another. The platform promotes products with higher scores by giving them more exposure.

The result is a cycle that encourages better products and services, with the consumers at the center of it: online commerce with a social layer on top.

From group-buying sites to product-recommendation services, hundreds of startups and an increasingly growing number of larger companies have embraced this model of turning products into conversations.

China is leading the trend. In the PRC, where online retail sales grew 49.7 percent to RMB2.79 trillion last year – prompting Ma Jiantang, head of the National Bureau of Statistics, to comment “This is where our hope lies” – social commerce has taken on a life of its own, becoming the backbone of e-commerce.

And as Chinese tech users shift from computers to cell phones, mobile devices are blazing a new, uniquely Chinese trail.

In early February 2014, during Chinese New Year celebrations, five million people opened bank accounts on Weixin (WeChat) and exchanged RMB270 million (USD45 million) with their mobile phones. And in early 2015, Chinese tech giant Baidu’s mobile market share hit 49.9 percent of its total revenue – an impressive figure for a company that, on mobile, has to fight to escape the shadows of Alibaba (owner of Taobao and Tmall) and Tencent (owner of WeChat).

"There’s no doubt mobile social commerce is gaining tremendous momentum,” says Kaiser Kuo, Director of International Communications at Baidu. “The integration of social media and transactions means consumers don’t just use their phones to buy things or post videos and pictures. They turn to their devices to get services, to solve real life problems, to seek advice from friends and to decide what products to buy or not to buy.”

Purchasing decisions, of course, have always been influenced by friends’ opinions. But the fast pace and huge scale of today’s social networks means that a few recommendations can, in a short period of time, snowball in influence and change a retail strategy overnight.

Location-aware smartphones, meanwhile, add the immediacy of the socially shared real-world check-in – giving local businesses with an online presence the opportunity to gain more customers and strengthen their brand identity.

“When you buy a movie ticket on your phone, you’re no longer making just a purchase,” says Kuo. “You can read people’s reviews of the film you want to watch, or suggestions about what cinema to go to, what good restaurants are nearby, where to go for a drink afterwards. Same for clothes, personal services, food. The whole purchasing experience is changing.”

While this isn’t only the case for China – US mobile commerce reached USD114 billion last year, and social commerce sales are forecasted to represent five percent of online retail revenue (or USD14 billion) by the end of 2015 – there is no doubt that the PRC is “years ahead of the pack,” according to Ivy Jiang, a research analyst at market research firm Mintel.

But why is mobile-based social commerce so successful here?

“Compared to most Western countries, Chinese consumers are less sensitive about their personal information security,” says Jiang, “which is a great advantage for social commerce businesses. 37 percent of Chinese mobile users actually want to share their history, make their location public and be targeted by localized services to influence and determine their purchases – something that phones make possible through their GPS and geo-location services. In the UK, only nine percent of consumers are interested in targeted marketing and advertisements. It’s a completely different situation.”

According to JK Shen, senior vice president of brand building for digital consultancy Razorfish China, another winning point for social commerce in China – and a main gap between the PRC and the West – is the way people engage with their online social network. Perhaps because of the restricted social life that comes from the one-child policy, adults see social media as a way to create and maintain a community of friends and peers they can trust.

“Being ‘social’ is taken very seriously here,” explains Shen. “While in the West, mobile users are primarily content consumers on social media, those in China are avid content creators.” And when it comes to consumption, they are eager to share their views on which products to buy, where to buy them and what they think of them. In fact, roughly 75 percent of all mobile users provide purchase feedback at least once a month, while that figure is less than 20 percent in the States.

Looking at more data, it is clear that China has no real competitors when it comes to mobile commerce. About 75 percent of Internet users browse from their mobile phones. In 2014, 73.2 percent of consumers in the country had used mobile payments, compared to just 41 percent in the US.

Mainstream Chinese consumers and social media users are from the post-80s generation – this is a market that was born mobile.

“It’s like China skipped a step and went straight to mobiles,” says Elyse Ribbons, CEO of Geili Living, a social commerce app slated to launch this summer on WeChat. “Cell phones predominate people’s everyday lives like computers used to – and still do – in Western society. Chinese people spend an average of four hours of their day on WeChat, and everything is shared. Integrating a social layer in commerce is just set to become the norm. No question.”

It’s like China skipped a step and went straight to mobiles.

Although still under wraps, Geili Living will be able to connect people with small, transparent charities and NGOs across China by way of a game. Users will be asked to invite their friend to play and donate money (RMB10) to different philanthropic projects rotating monthly – the more people they invite, the bigger their social circle becomes, the more points they’ll get.

Ribbons, who has been in China since 2001, first developed the idea while attending Stanford Ignite in Beijing, an academic program for entrepreneurial thinkers. A couple of tweaks to her business plan and an admission into Chinaccelerator (a premier startup incubator based in Shanghai), and the concept is now about to be released as a “social enterprise and philanthropic tool on mobile.” The American entrepreneur hopes to monetize it by tapping into the influence each of us wields over our friends. “Social media and apps lend themselves to promoting and building validation, confirming that what you’ve done, bought or – in our case – donated is great. It’s one of the irrational, unexplainable but inherent bits of human behavior, and Geili Living is banking on that.”

Ribbon’s app, of course, isn’t the only one doing that. An increasing number of micro enterprises and startups in China are recognizing the value of user-generated content and embracing social influence on their e-commerce platforms.

The tech giants are helping the process – and starting a competitive race of social commerce that’s bound to give China even more of an edge over the rest of the world.

In March last year, WeChat, backed by Tencent, launched Weidian (‘mini store’), a mobile-only app that allows small businesses to sell products directly through the messaging platform to their followers and account subscribers. The greater number of friends you have on WeChat, the higher profile the store, and elements like repeat orders, personalized messages, giving away small gifts on festive occasions and having one-to-one chats with customers give Weidian a social touch.

This April, Alibaba’s Taobao responded with Xiaopu (also ‘micro store’) which enables vendors to set up and operate online businesses from mobile devices and promote products through social media. Merchants can post new items by scanning barcodes or taking photos of them, while consumers can access storefronts on their mobile devices simply by entering unique storefront access codes or scanning a QR code-based business card using Mobile Taobao. Xiaopu will also offer location-based services, so buyers can search for shops nearby and vendors can provide more personalized services to customers within the same area. To further lower the entry barrier to e-commerce, Xiaopu is also equipped with a loan application function to provide eligible users with financing support.

“Weidian counts over two million stores now,” says Jiang. “It’s an outstanding number. Taobao’s Xiaopu is set to follow suit. The phenomenon is completely changing marketing and retailing – and Chinese brands are adapting fast. Western ones have to pick up their game if they want to really compete in China.”

“In China, the future of commerce is on mobile devices,” reiterates Shen. “The Taobaos, Jingdongs and Tencents will keep striving to improve, engage with and win over consumers on their cell phones.”

In a society – Chinese and non – where a progressively larger part of your daily ‘living’ is spent online, people, on their end, are only going to share more.

Although social recommendation can help you discover things that some algorithm won’t, the thought that private conversations might be soon commercialized by brands and businesses to create products more likely to be shared among peers does cross the mind. But that’s the price of the game, perhaps. In an ever-growing social market, sharing is caring. Right?