About halfway between the Forbidden City and the Sphinx, the mud finally broke through our shoes and started to seep into our socks. We had tried to hitch a ride from a few of the motor scooters parked outside the Tian’anmen gates, and from the omnipresent minivans carting workers from one international landmark to another – but to no avail. That’s how we ended up walking through the muddy depths from Qing dynasty China to ancient Egypt. 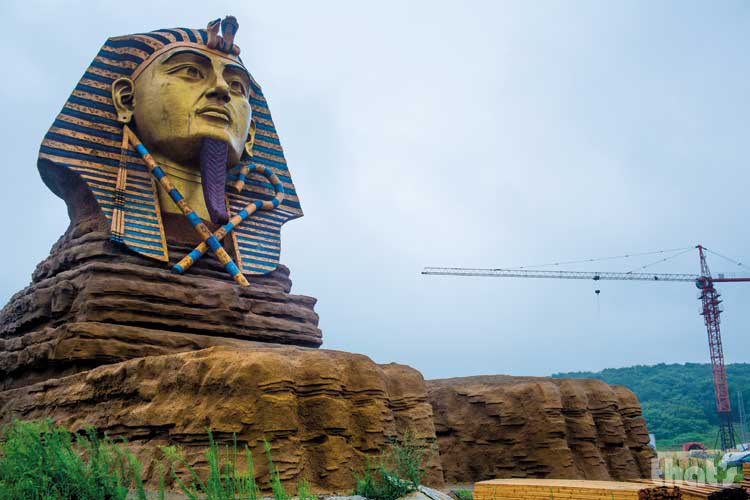 Someday, this place will be filled with cameras, lights, snakes of cables and foldable tables with catered snacks. The minivans will be crammed with actors and set designers, instead of heavily tanned construction workers in orange helmets and tank tops. 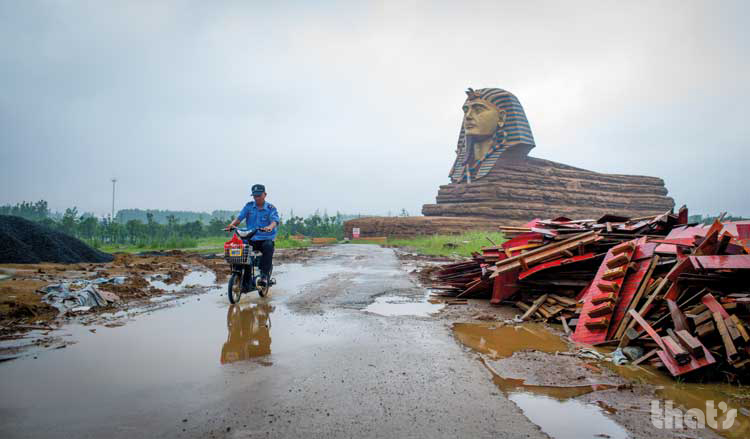 Film crews from throughout the country will flock to the city of Chuzhou, Anhui Province – or, at least, that’s the idea. 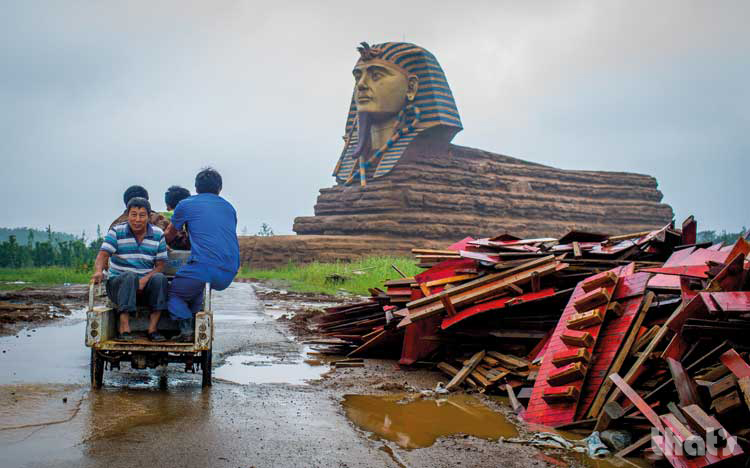 The snappily titled Chuzhou Great Wall International Tourism Cartoon Creative Park aims to become one of China’s major film lots – a place where studios from throughout the country can rent out space and film at any number of pre-fab sets of world landmarks. Started in June of 2013, construction is still ongoing. The Acropolis is, right now, little more than a few stacked columns, but filming has already begun on a few finished set pieces. 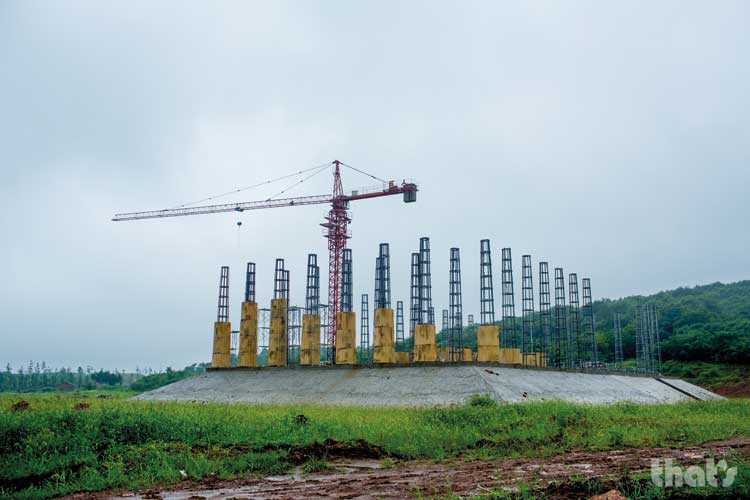 With the right cinematographer and a careful eye, it will be easy enough to film inside a Chinese water town without accidentally catching the glass pyramid of the Louvre in the background, or to capture Chiang Kai Shek’s Presidential Palace without also including the nearby ancient Mongolian yurt village. 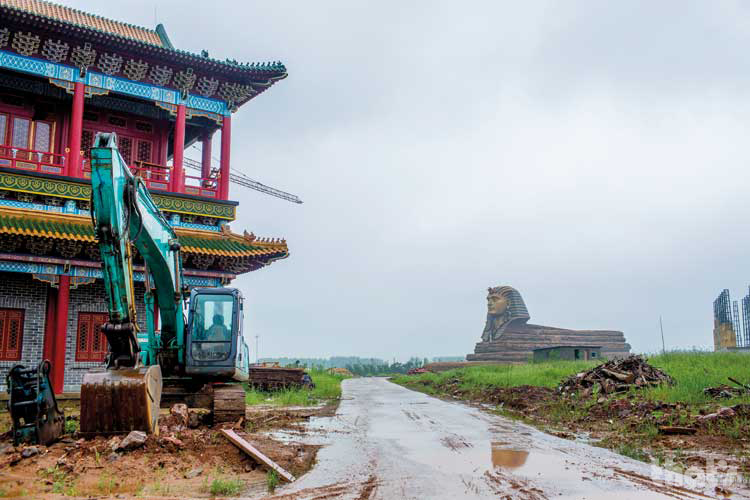 But to the observer traipsing through the mud-soaked streets connecting each set piece, it’s impossible to see just one era at once – it’s like walking through a history nerd’s most Adderall-addled fantasies. 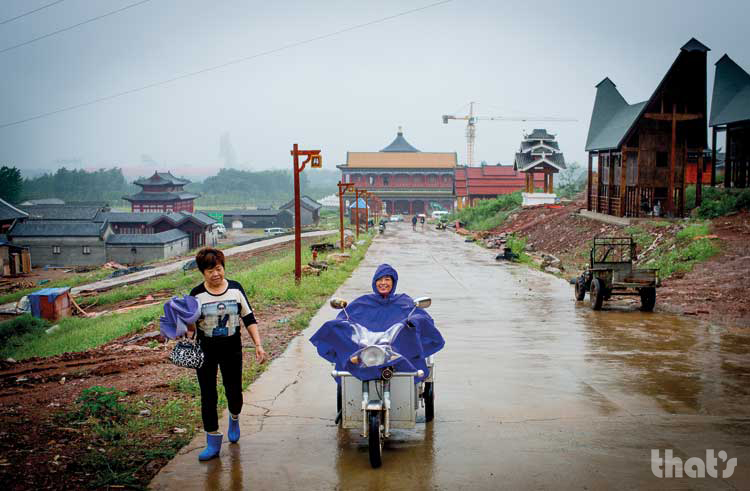 On our visit, only a few sets are actively being filmed – but there are dozens of people wandering about, poking their heads into the various locales. That’s because the clever folks in Chuzhou realize the chance to make a buck when they see it – while the location is still relatively uncluttered with film crews, they’ve turned it into an impromptu tourist destination. 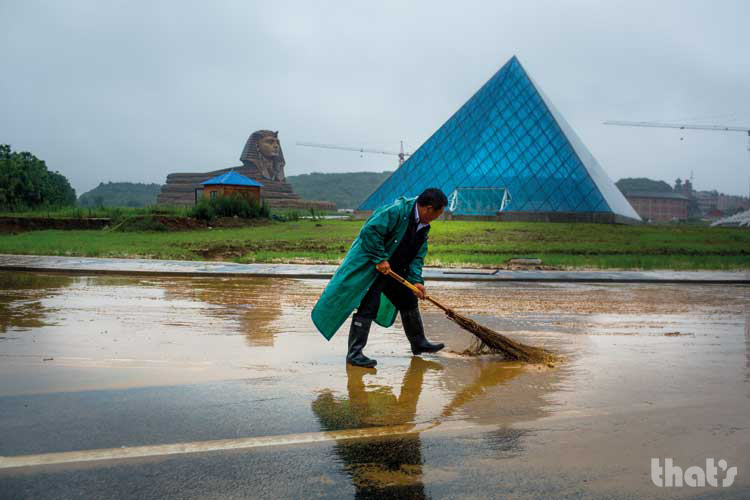 Slip 20 kuai to a woman at the front gate, and you can take enough faux-vacation photos to last a lifetime – where else, in the span of an afternoon, could you snag a selfie in front of the Sphinx, the Acropolis and the Great Wall? 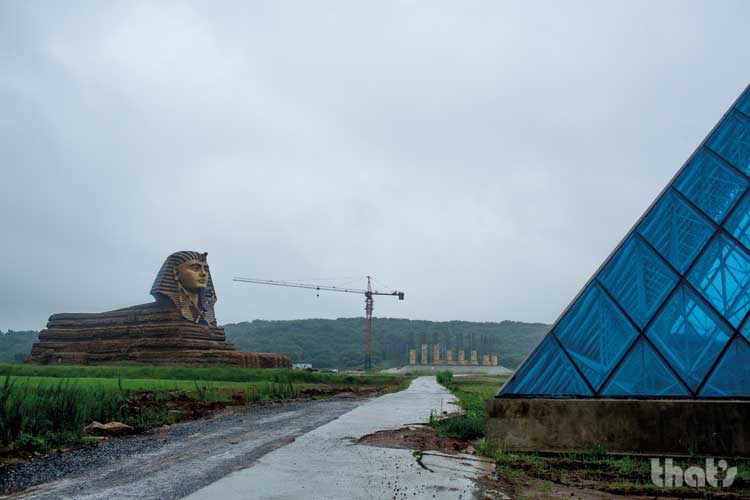 The people of Chuzhou aren’t the first to realize this – last year, Egyptian authorities filed an official complaint with the United Nation’s Educational, Scientific and Cultural Organization (UNESCO) over a replica Sphinx constructed outside Shijiazhuang, the capital of Hebei Province. 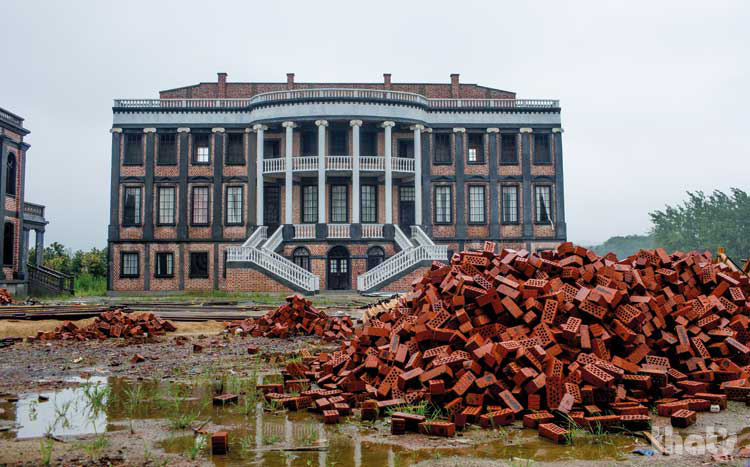 The Great Sphinx of Hebei, also built as part of a film set, was attracting so many tourists that Egypt’s ministry of antiquities complained it was denigrating their cultural heritage. The Hebei company gave in and demolished the structure, which they said was temporary anyways. 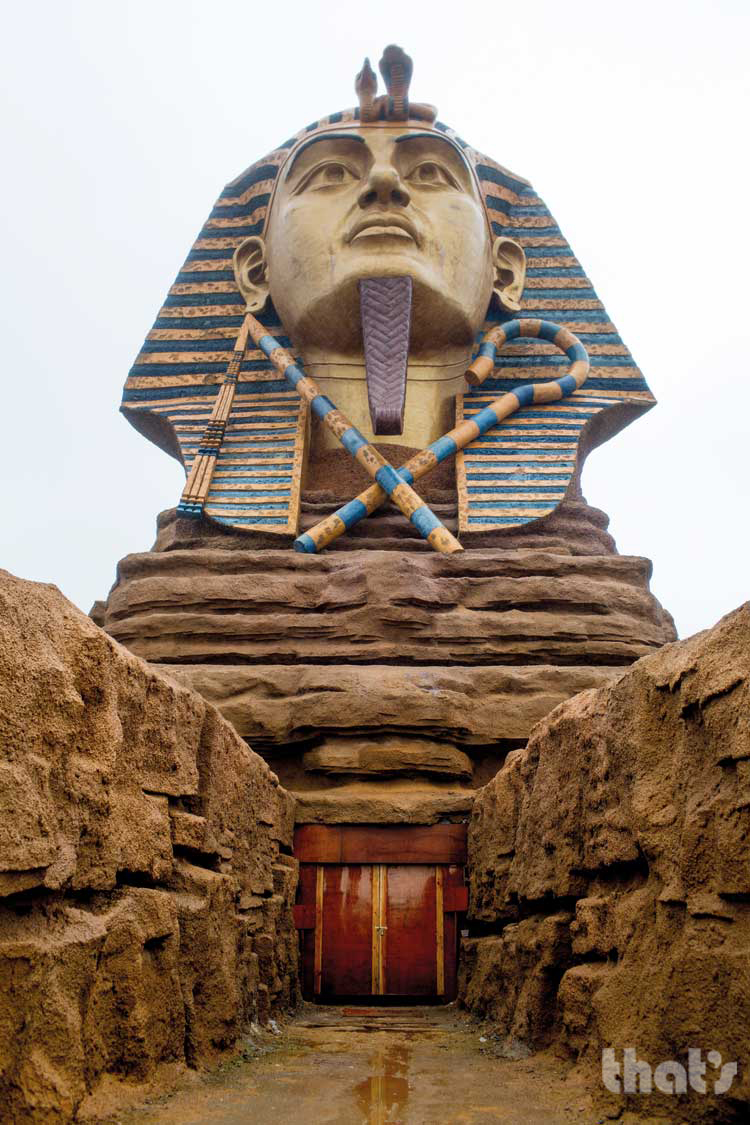 The Egyptians haven’t caught up with Chuzhou just yet, but it may only be a matter of time – the otherwise humble Anhui city has certainly not let its new monuments go unnoticed. When we arrived at the train station from Shanghai, we hailed a cab. “Can you take us to the sphinx?” we asked. No cross streets or cellphone maps necessary – it’s pretty hard to have ancient Egypt crop up in your back yard and go unnoticed. 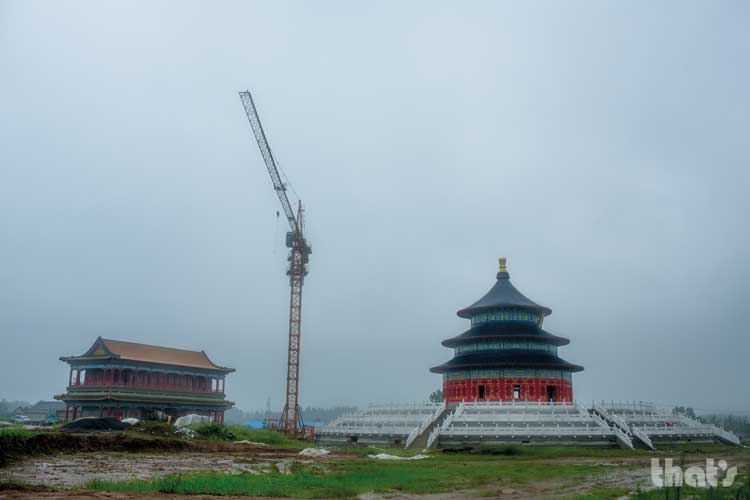 But even if the Egyptians do catch on, or even if the film crews don’t flock to Chuzhou en masse, the Great Wall International Tourism Cartoon Creative Park is still one epic accomplishment. 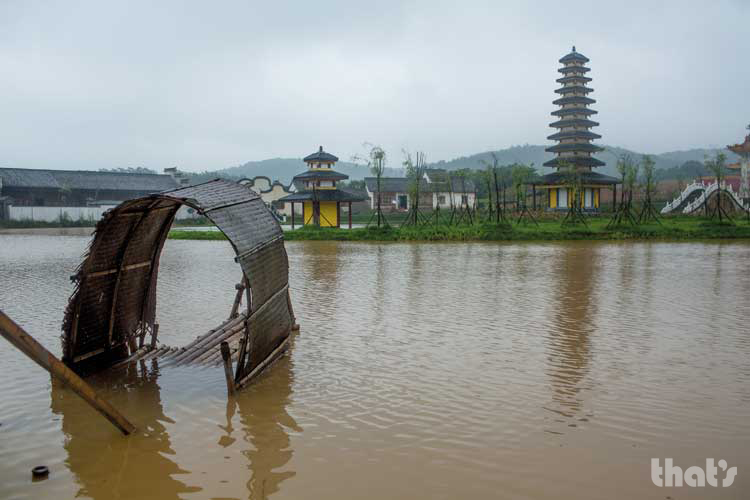 It’s a highlight reel of humanity’s greatest constructions, situated all within one – albeit slightly muddy – park and slapped with an RMB20 admission fee. Just make sure each selfie only includes one historical monument at a time, or else your friends may realize that you did not, in fact, travel throughout space and time during that brief trip to Anhui. 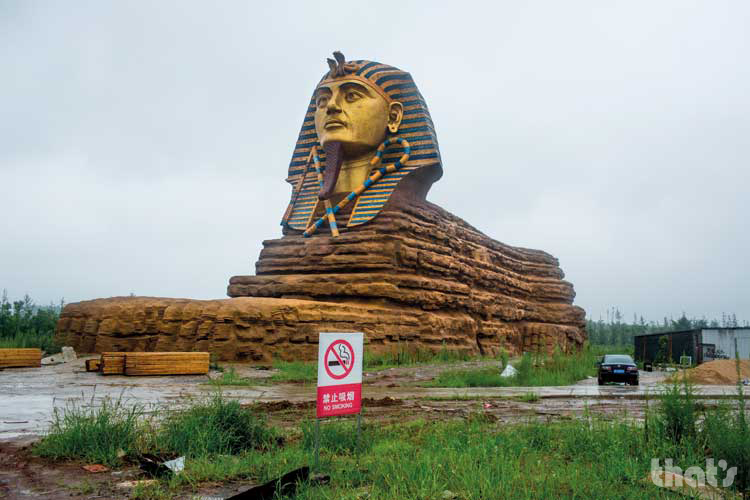 // Watch our video of Chuzhou here.

// To get to the Chuzhou Great Wall International Tourism Cartoon Creative Park, take the Beijing South Station-bound high-speed train from Shanghai Hongqiao Train Station (tickets RMB164) and get out at Chuzhou, Anhui. Admission for tourists (RMB20) is at Tian’anmen gate – only certified film crews are able to enter by the Sphinx. 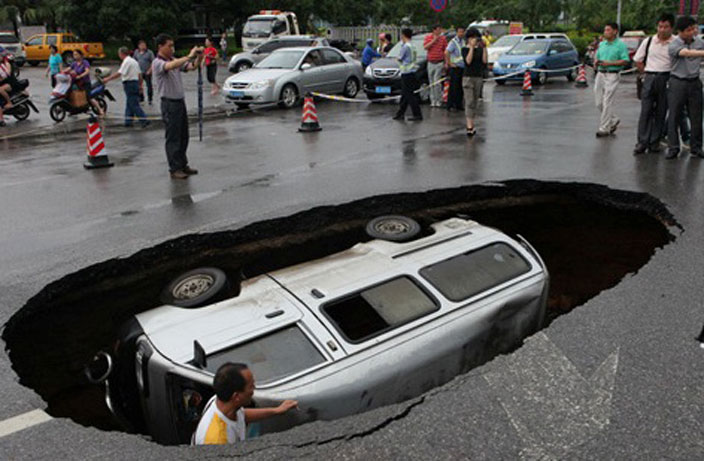 15 Photos of China's Sinkhole Epidemic That Will Terrify You

WARNING! Chinese sinking feeling could be coming to a town near you... PHOTOS: China's own Atlantis, an Ancient City Preserved Beneath a Man-Made Lake

The underwater jungle of temples, arches and paved roads lay forgotten for 53 years before being developed as a diving destination Bryce Plankao, who goes by the handle 'estate8143' on Reddit, recently tried to 'hike along the rural Great Wall of China for 4 days', by his own estimate he failed to do this (in fact, he may have almost died in the process), but he got some great photos out of the experience. He also shot the above video of hiking on Huang Shan.