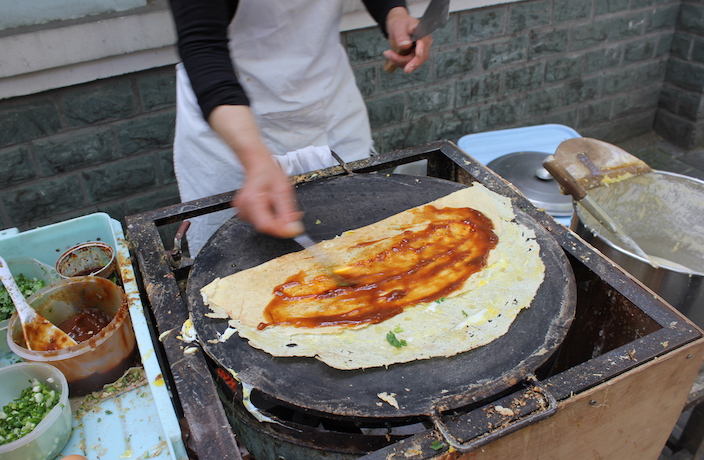 Did you know that today (April 30) is World Jianbing Day? Yep, it’s a thing. 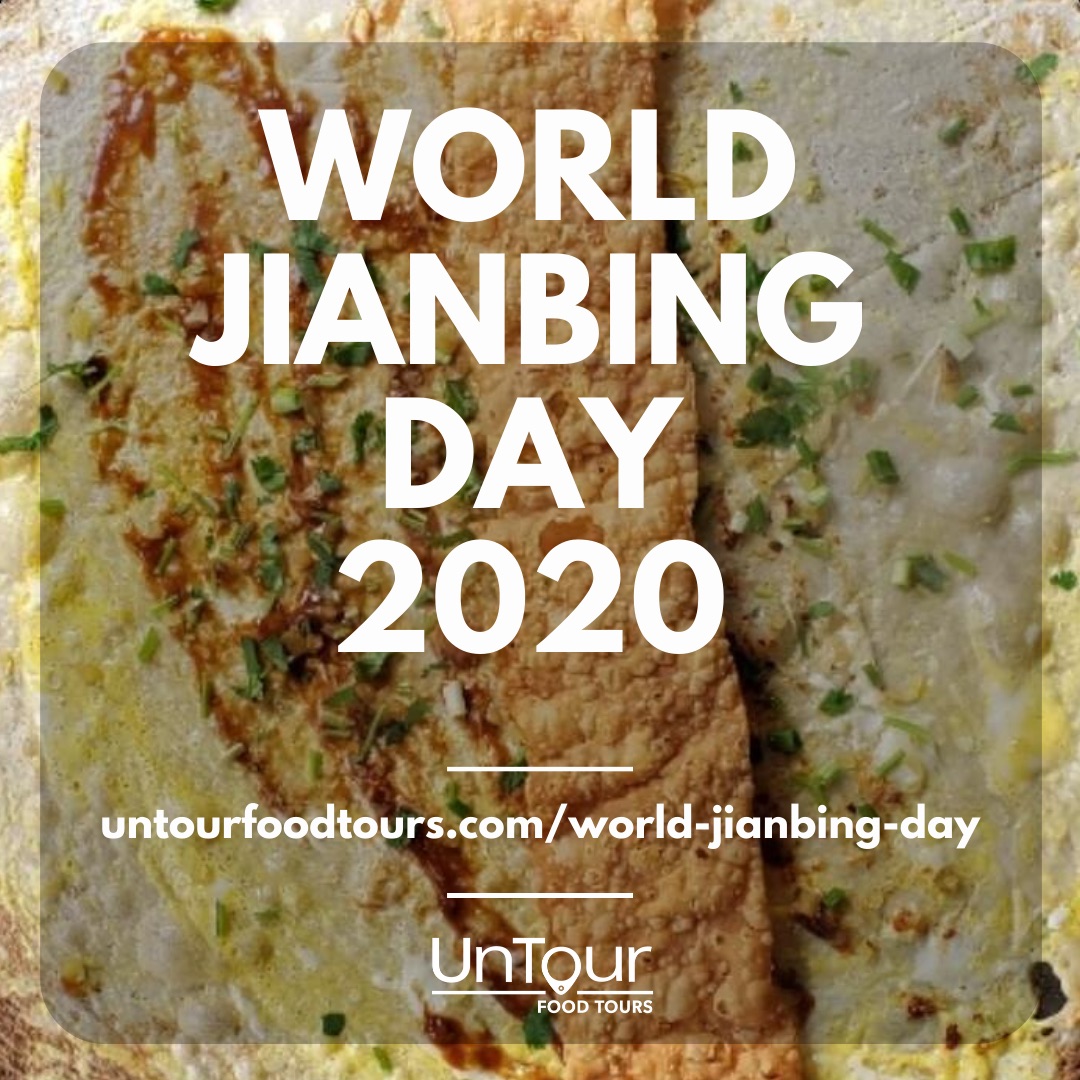 World Jianbing Day is an annual event founded by UnTour Food Tours in 2019. The team at UnTour wanted to spread the love of jianbing around the world and celebrate its many forms. From the original found streetside to the modern and fusion jianbings that you can now find globally, we love them all!

Jianbing is a savory traditional Chinese ‘crepe’ (but really isn’t a crepe just a French jianbing?) with a fried egg and other fillings that is traditionally found streetside. Its origins can be traced to Tianjin and Shandong province, but it is loved around China and now, more than ever, around the world.

According to legends, jianbing was invented nearly 2,000 years ago during the Three Kingdoms period (220-280) by Zhuge Liang, a military strategist who was coincidentally the same guy who invented the mantou! He also supposedly invented landmines, so, I mean, he had his faults but culinary skills were ace.

Anyway, Zhuge Liang was faced with feeding an army of soldiers who’d lost their woks after a quick retreat, so ordered the cooks to evenly mix water with wheat flour and spread the dough onto a shield suspended over a fire.

The dish lifted his soldiers’ morale and they fought their way out of an ambush. Take that story with a grain of salt (like most Chinese food histories) but I tell you, I’d fight someone for a good jianbing.

Now that you’re up to speed on this fabulous holiday, we’re sure you’re hankering for a jianbing right about now. Here’s what UnTour has planned for the second annual World Jianbing Day. We hereby proclaim 2020 is the year of the “Quaranbing,” which means it’s time to put your jianbing prepping skills to the test. UnTour is hosting jianbing-making classes. Today’s class has already sold out, but you can still book a spot for the May 3 class. Space is limited to six spots per class. Price is RMB390 per person, and guests get a 25% discount on jianbing swag (more on that below).

Maybe you were lucky enough to try the Homeslice jianbing pizza last year? Well, it’s back, along with eight other limited-time special themed dishes created specially for World Jianbing Day. Scroll down below for a list of participating Shanghai restaurants. 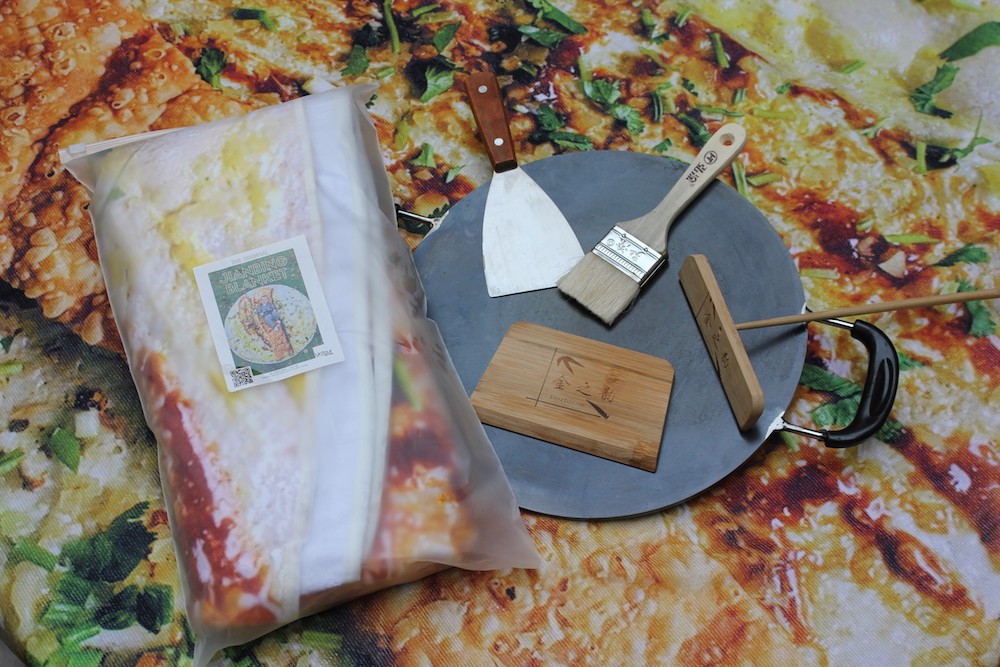 Want to turn your favorite street food into homecooked brunch? UnTours’ Jianbing Making Kit (RMB350) includes everything you need to make your own jianbing at home, as well as the Original Jianbing Blanket – the perfect after dinner treat as you can be the wrap up in the jianbing blanket on the couch after you’ve flipped your way through dinner! 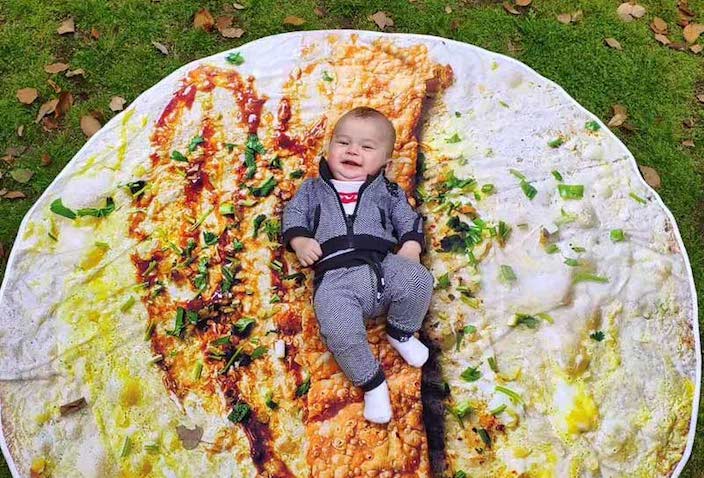 You haven’t really experienced quarantine until you’ve become the cuipi in your very own Jianbing Blanket (RMB350). The blanket is perfect for lounging on the couch, turning heads at a picnic, tanning on the beach, impressing your hipster friends with your street food knowledge, long nights in front of the fireplace with your partner in crime and so much more. 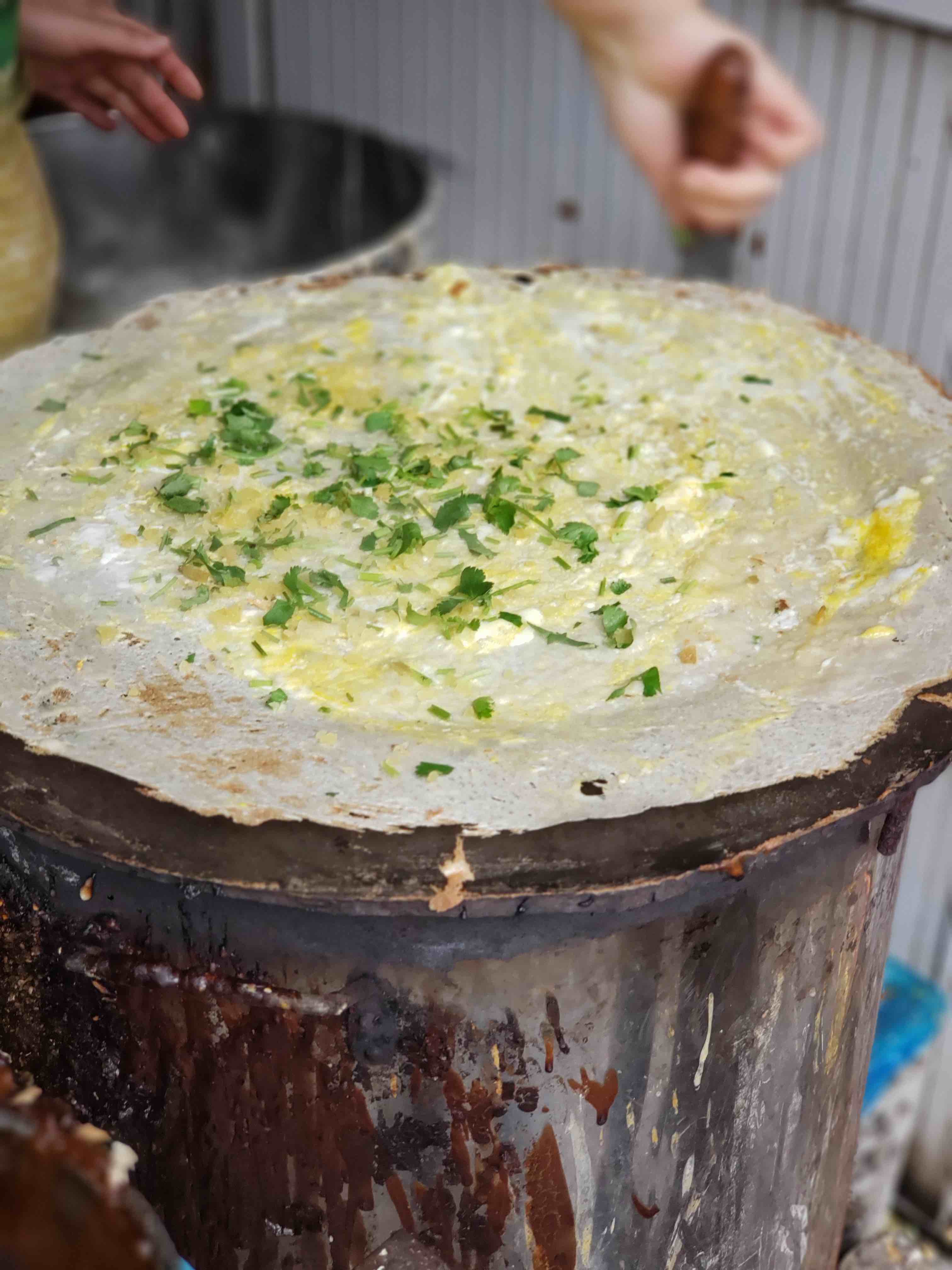 UnTour Food Tours is giving away one Jianbing Making Kit that includes everything you need to make jianbing at home. You’ll also get the O.G. Jianbing Blanket and a digital cookbook. To enter the competition, simply share a post and tag #worldjianbingday and @UnTourFoodTours on Instagram or Facebook. Whether it’s a throwback photo of your favorite jianbing or an attempt at #quaranbing cooking, UnTours wants to see your jianbing snaps!

Now, as promised, here are a few venues around town that are offering special jianbing-themed menu items for this special occasion: 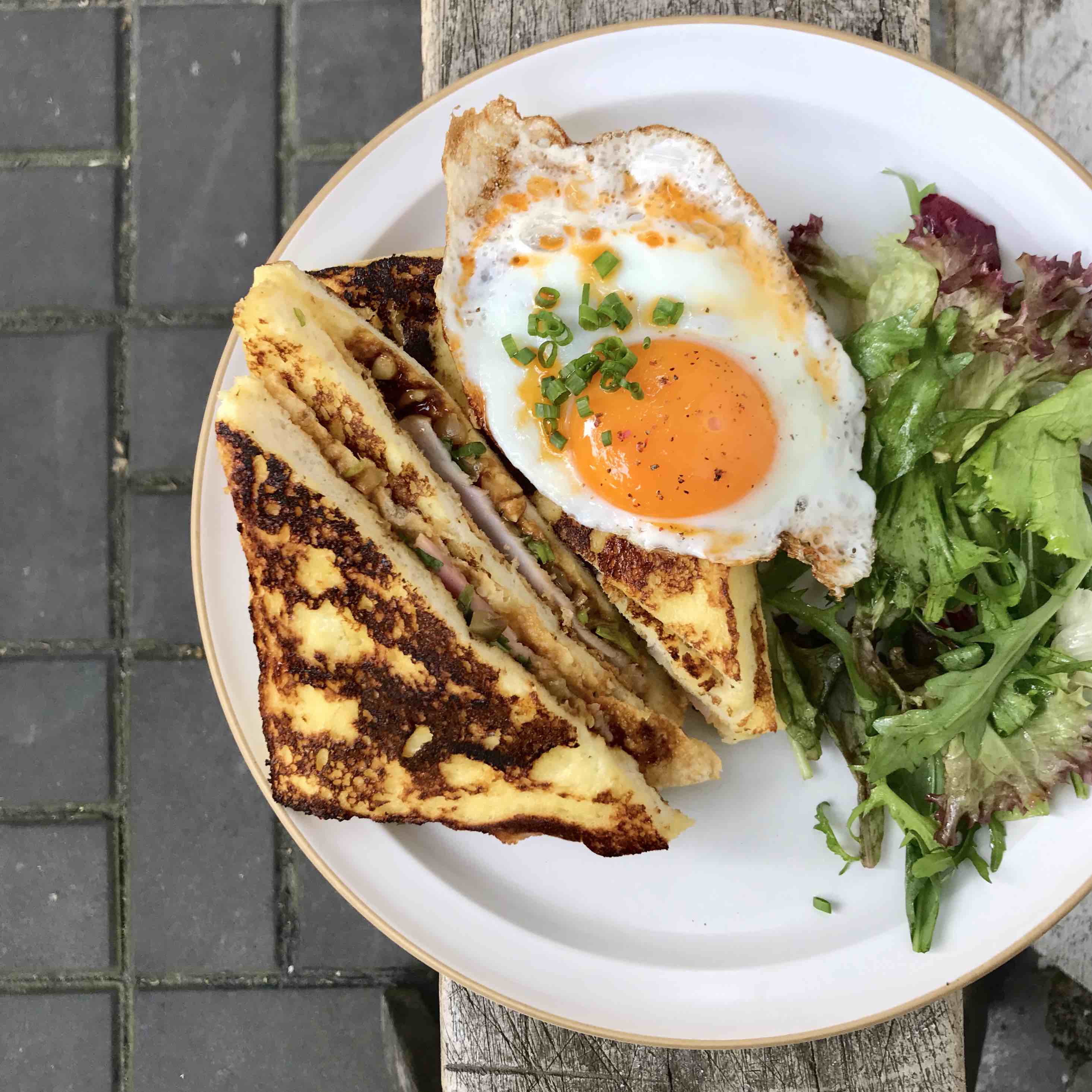 Egg is serving up jianbing French toast, available all day long. This triple-stack white toast is dipped in an eggy cream batter and topped with French-style ham, roasted peanuts, Zhacai pickles, crispy wafer, tianmianjiang, cilantro, scallions, a fried egg and housemade chili oil with a lettuce salad on the side. It’s RMB60 with ham and RMB45 for the vegetarian option.

Head over to Heritage by Madison for Shanghai 'fuerdai’ luxe jianbing, featuring a multigrain chive crepe wrapped around a salad of crabmeat, creme fraiche and fine herbs. That comes topped with sourdough bread tuile and finished with an obscene dollop of sturgeon caviar. Decadent! It’s RMB888 (yep, you read that right) and is available all week long from April 30 until May 7, in case you want to try it over the long Labor Day break. 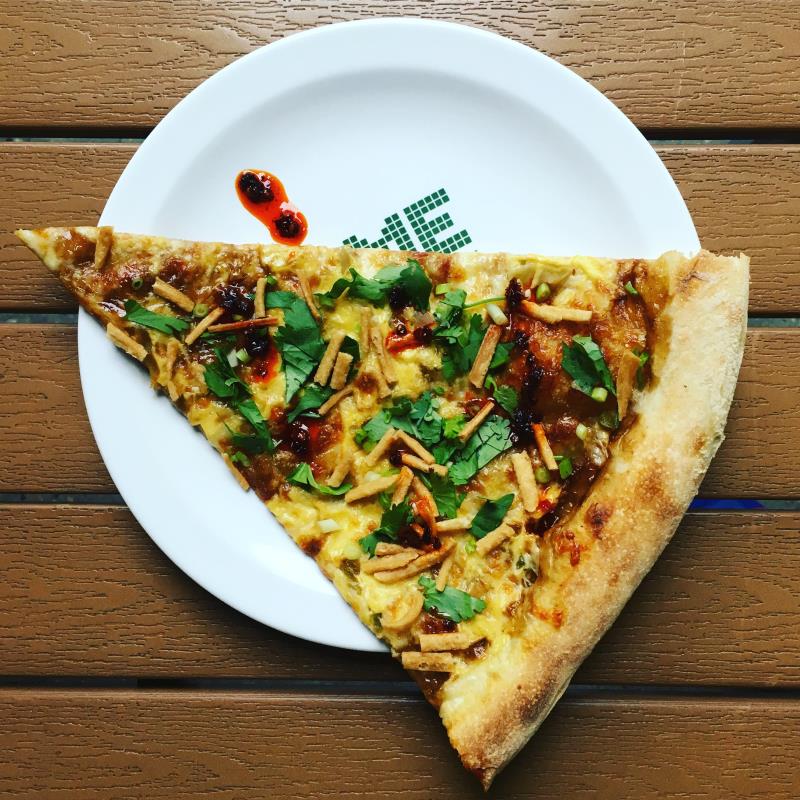 Jianbing and pizza – what more could you ask for? Homeslice’s jianbing pizza takes their signature sourdough crust and tops it with tianmianjiang, cheese and egg. Each order is also sprinkled with pickled mustard greens, cilantro and green onions, and customers can choose to add different crunchy toppings. Optional add-ons include ham, mortadella and pork floss. The original jianbing pizza is RMB15 per slice, or you can order a whole pie (RMB55-120 for a 12-, 16- or 20-inch crust). Grab a whole ham/mortadella pie for RMB65-145. The jianbing pizza is available at all three Homeslice locations, as well as the usual delivery platforms.

For a Serbian twist on the Chinese breakfast classic, check out Papito Pancakes' palačinka jianbing. Savor egg, cheese, ham, green salad, roasted paprika and jianbing crisp on an East-meets-West jianbing (RMB48). It’s available all day in shop, and a free soft drink is included with every order. Perch is celebrating this magnificent occasion with a puffy bread prosciutto jianbing. For RMB48, enjoy puffy bread on a corn flour bing served with freshly sliced prosciutto, cilantro, tianmianjiang, green onions, tomato and a dash of mustard. Available all day. 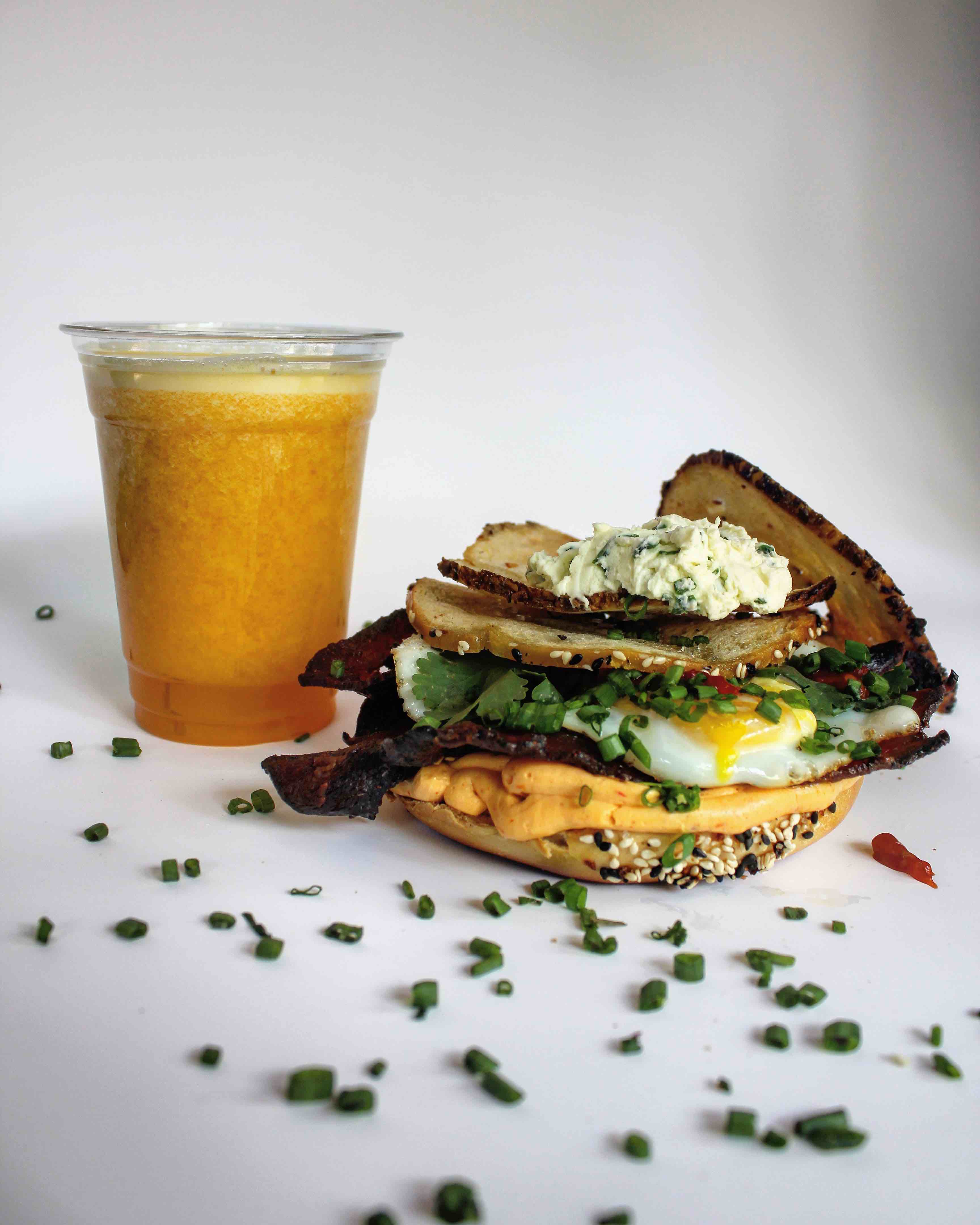 Spread the Bagel gives breakfast a whole new meaning with the NYC deconstructed jianbing bagel (RMB60). This open-faced everything bagel is topped with candied spicy bacon, sriracha cream cheese and a sunny side up egg. The bagel is also garnished with green onions, cilantro and garlic chili pepper sauce. The combo comes with the other half of the bagel, which has been turned into everything bagel chips served with a green onion and sour cream cheese dip. Available in-store and via delivery from April 30 to May 3. 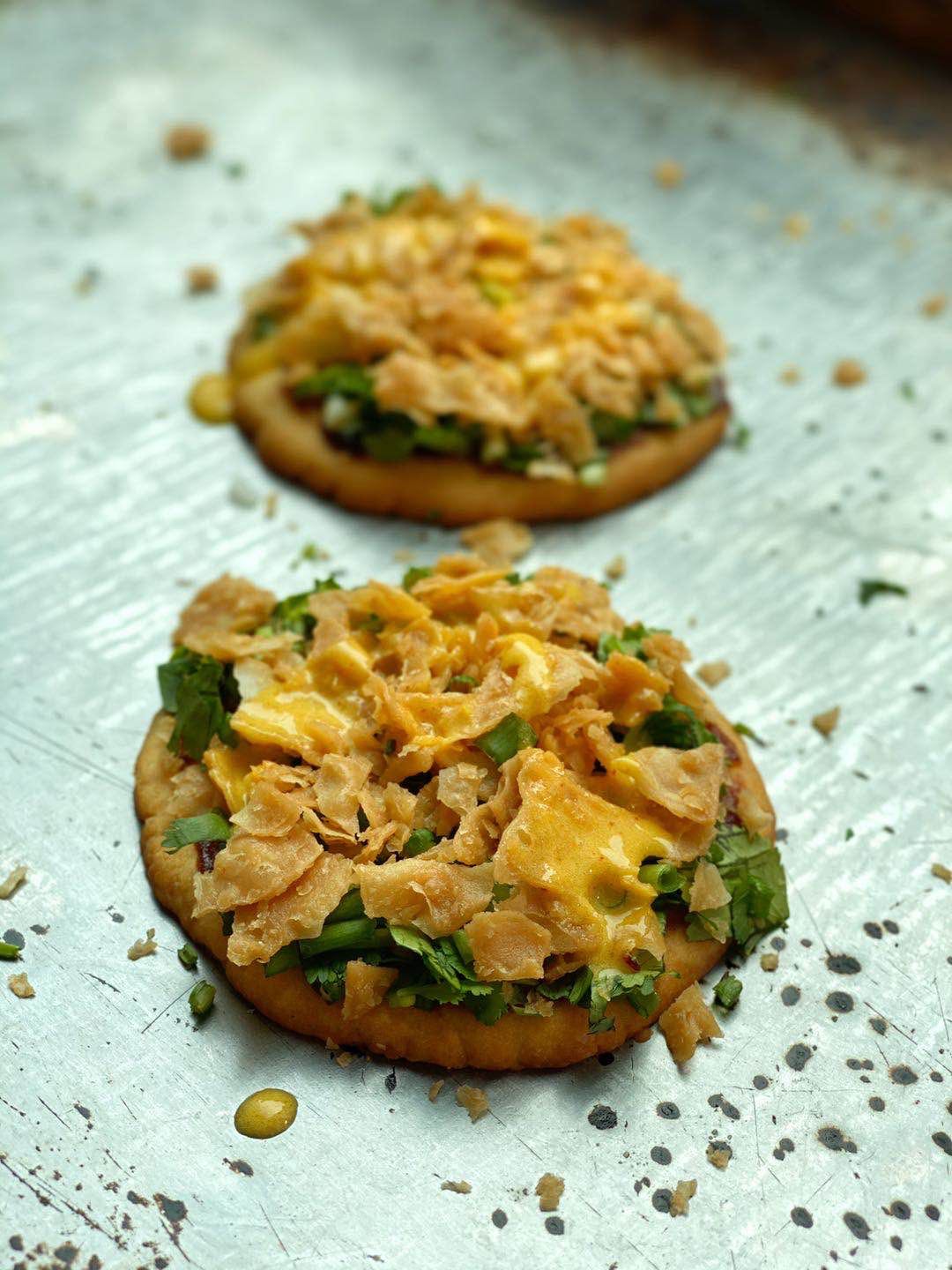 Strictly Cookies is celebrating the big day in fabulous fashion with jianbing cookies (RMB22 per cookie). Using a simple egg and wheat flour base, this cookie starts off with a spread of savory jianbing sauce, crumbled crunchy wonton crackers on top and cilantro, and it is finished off with an egg yolk and chili glaze. The cookies are available today only at their store on Yan’an Xi Lu (right next to Columbia Circle), or for delivery through their WeChat shop, website, Eleme, Sherpas and Meituan.

Also participating are Naked Nut Butters, who are releasing a dessert jianbing recipe, while Sidechef will be posting a step-by-step recipe.

Finally, anyone who manages to hit up all nine spots listed above and tags @untourfoodtours and #worldjianbingday on Instagram or WeChat will automatically win a free Cook With UnTour cookbook. So hurry up and get eating!