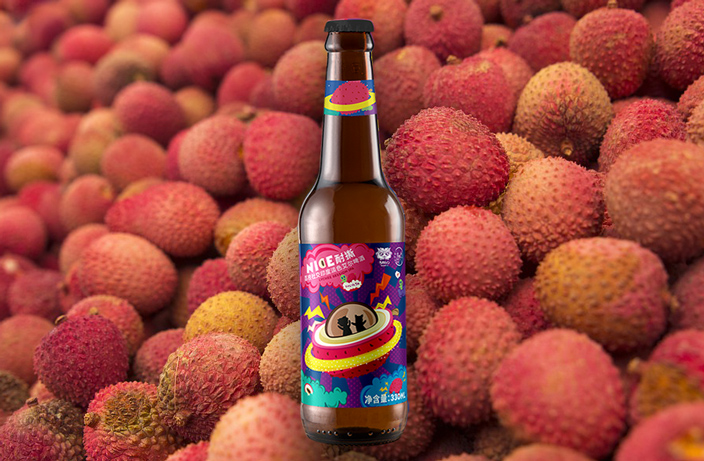 ‘Beer of the Month’ is a regular series where our editors sample a unique craft beer. This month, our Guangzhou editorial team sampled Guangzhou-based Bravo Brewery’s Nice Lychee Session IPA!

If you’ve spent any time in Guangdong, chances are you’ve spotted lychees being sold in a market or on the street. The fruit is native to the province and is beloved by many for its white, sweet-scented flesh.

Bravo, a Guangzhou-based craft brewery known to churn out some pretty flavorful suds, has a brew that galvanizes lychee lovers (ourselves included). Their Nice Lychee Session IPA checks all the boxes for a fun, fruity brew that we consider an ally in our quest to beat South China’s unrelenting summer heat.

Based off the bottle’s colorful, outer space-themed label, we’ve concluded this beer was brewed with the intention of transporting drinkers out of this world. While we didn’t exactly leave the stratosphere, we found the brew to be a real delight in these brutally hot Guangzhou months.

Coming in at 4.5% ABV, these suds are light enough to knock back a few with the gang and not feel bogged down by the bitterness that comes with a standard IPA. From the moment you crack open this beer, the distinct fruity tones of fragrant lychee come to fruition in a delightful manner. The beer is slightly bitter and malty with a light to medium body.

Recently named 2019 Berlin International Beer Competition’s ‘China Brewery of the Year,’ Bravo has more than a few notable craft beers we’re digging, such as the Pride of 020 IPA, the White Knight Belgian Wit and, our personal favorite, the Mango Pomelo Crème Milkshake IPA.

If you’re in Guangzhou, be sure to stop by Bravo’s brewpub for a pint, otherwise you can order a case on Taobao.

Purchase a six-pack of Nice Lychee Session IPA on Taobao for RMB108 (This price is only available on mobile, accessing the link via computer may lead to a higher price).