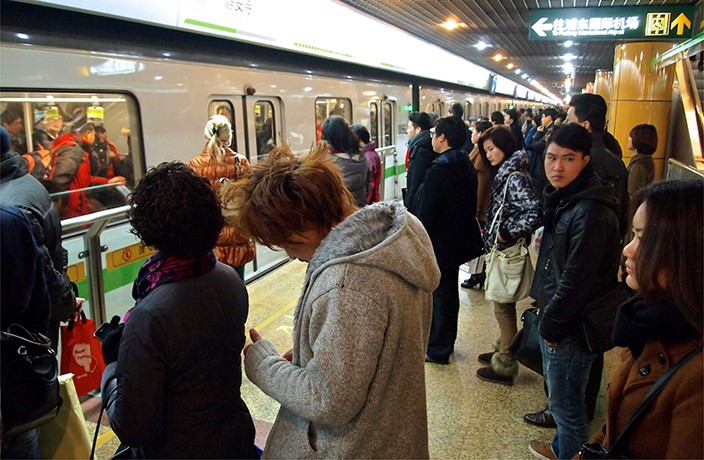 Getting a seat on Shanghai’s subway trains can be a challenge, especially during peak hours. Now, more and more passengers are bringing their own portable stools onto the metro, Shine reports.

According to UITP, the Shanghai metro sees over 2 billion passengers each year, making it one of the busiest metro systems in the world. With a lot less seats than there are people, it is impossible for everyone to secure themselves a place to sit during their rush hour journey. That’s why some resourceful commuters are setting up their own portable seats, allowing them to sit comfortably in packed subway carriages.

It might seem like a creative solution but these portable stools are causing outrage and annoyance among many netizens and commuters, as they take up valuable space and can even be a safety hazard on cramped trains. The stools can block others from exiting and entering the train, and when the carriage turns or stops suddenly, standing passengers might trip and fall over them.

Desperate times, however, call for desperate measures. Many passengers feel they have no choice but to bring their own stools onto the metro. On long, jam-packed rides from one side of the city to another, standing up gets tiring. Frequent metro commuter Jimmy Wang told Shine he sits on his own stool as he travels home from work carrying over 50 kilograms of photography gear. “The night trains from the city to Huaqiao are also packed and I’m too tired to stand all the way home,” he said.

Besides, there are no rules stopping people like Wang from sitting on their own chairs. According to Shine, while the metro operator doesn’t encourage the behavior, they can’t stop people from bringing portable stools with them.

So the trend is perfectly legal, despite some safety issues and annoyed fellow passengers.

Only one more week...