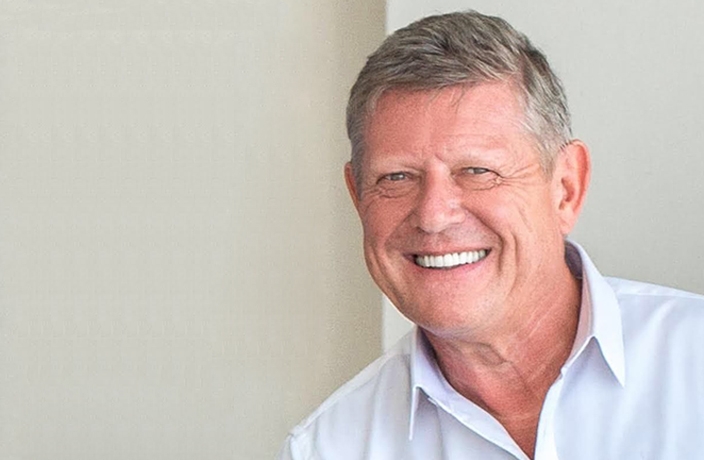 Born in Sheffield, England in 1955, Steve Hinchliffe sadly succumbed to cancer on his new island home of Koh Samui on March 4. There will be a memorial for him at The Hustler's Lounge from 3pm on Saturday March 31. A man of many talents, Hinchliffe was at times a concert roadie, a digital marketing guru and even an actor. To those who knew him in Shanghai though, he was known simply as The Legend. Here, six friends explain why. 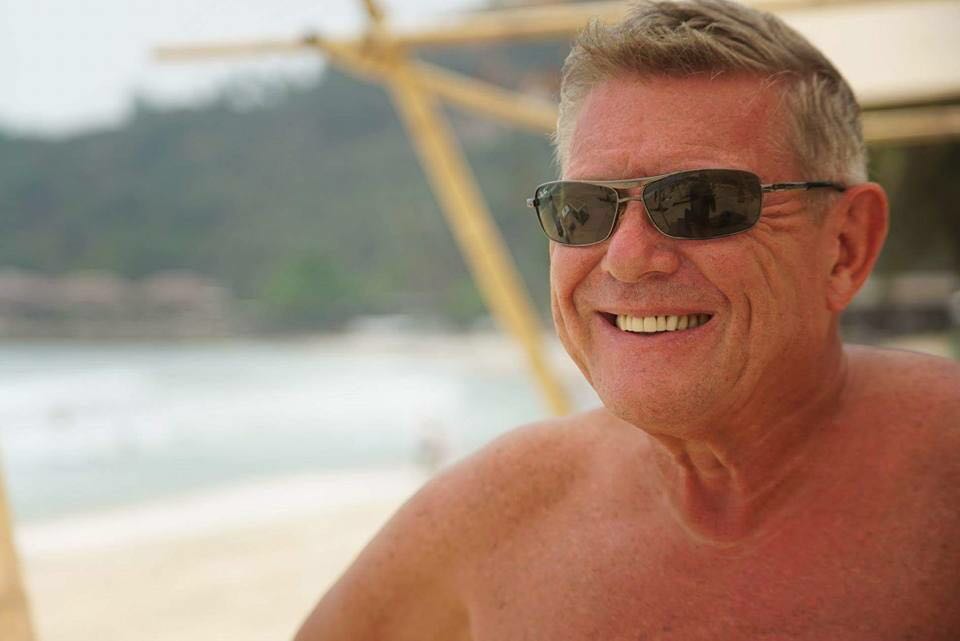 Toby Collins: "We were drawn together through equal values in life of never taking anything too seriously and enjoying ourselves as much as possible."

I was 26 and Steve was 48 when we met in Shanghai – a 22 year age gap that would be considered by most to be quite large. However, in Shanghai – a city where generational boundaries seem to be relatively non-existent within the expat community – we ended up becoming the greatest of friends.

This was especially surprising as Steve had already had infinitely more life experiences than me – over the course of nearly five decades he had made millions, lost millions, made them again, worked with Richard Branson, got married then divorced, and finally moved to Shanghai.

I, on the other hand, was trying to start my first company ever with only a few years of work experience and certainly had no understanding of what a serious relationship was. When I was 3-years-old, Steve had founded a marketing communications group that became one of the UK’s top 5 digital agencies within 10 years. By the time I was 13, his client list included Virgin Group, EMI, Forte Group, Coca Cola and Sony – with hundreds of incredible stories to go with it.

Writing this makes me feel that I had so much more to gain from our friendship than he did. Not only as a mentor, but there was probably also a subconscious desire to fill a fatherly void in my own life, mine having passed when I was 14. Interestingly, we often used the 'Father and Son' joke as a suggestive, and somewhat creative, pick-up line while out on the town at bars and clubs – and it usually got a hugely satisfying response.

In some ways I feel that there was not much I could have taught or given back to Steve, but yet this was part of his magic. He was always interested in everyone and everything. He never shoveled his opinions on anyone, but made you feel that he was generally interested in what you had to say.

Even when falling upon harder times in Shanghai, he never once moaned about his loss. In fact, I don’t think he ever considered them to be losses, as he seemingly had no regrets. This Huxleian 'here and now' attitude was one of his defining characteristics that probably inspired me the most. Learning to keep going with the same unfaltering passion, no matter what life throws at you. As Huxley said, "The secret of genius is to carry the spirit of the child into old age, which means never losing your enthusiasm." 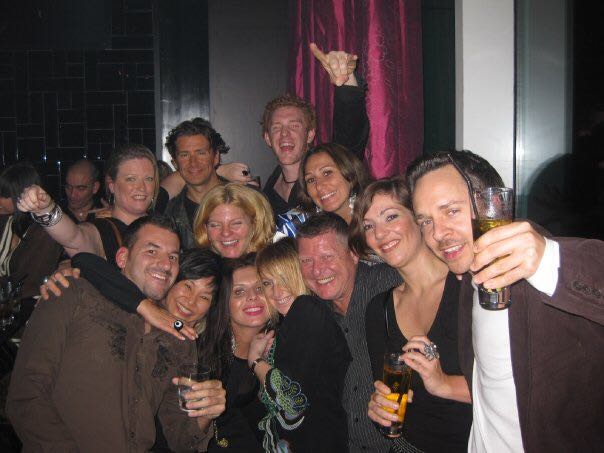 I’m not sure why, but I know that in the end, neither of us reflected on the details of our friendship. We were drawn together through equal values in life of never taking anything too seriously and enjoying ourselves as much as possible. Shanghai was the perfect playground for us.

We shared an apartment together, set up several businesses together, travelled, partied, cried, fought and laughed. We never questioned things too deeply, yet could talk for hours about anything. We lived. Without ever trying to be, he was an amazing guide, supporter and mentor. Above all he was an amazing friend – one that I will miss terribly. However, I know what he would really want is for me to shut up now and have a drink.

As another wildman Hunter S. Thompson said... "Life should not be a journey to the grave with the intention of arriving safely in a pretty and well preserved body, but rather to skid in broadside in a cloud of smoke, thoroughly used up, totally worn out, and loudly proclaiming 'Wow! What a Ride!'" 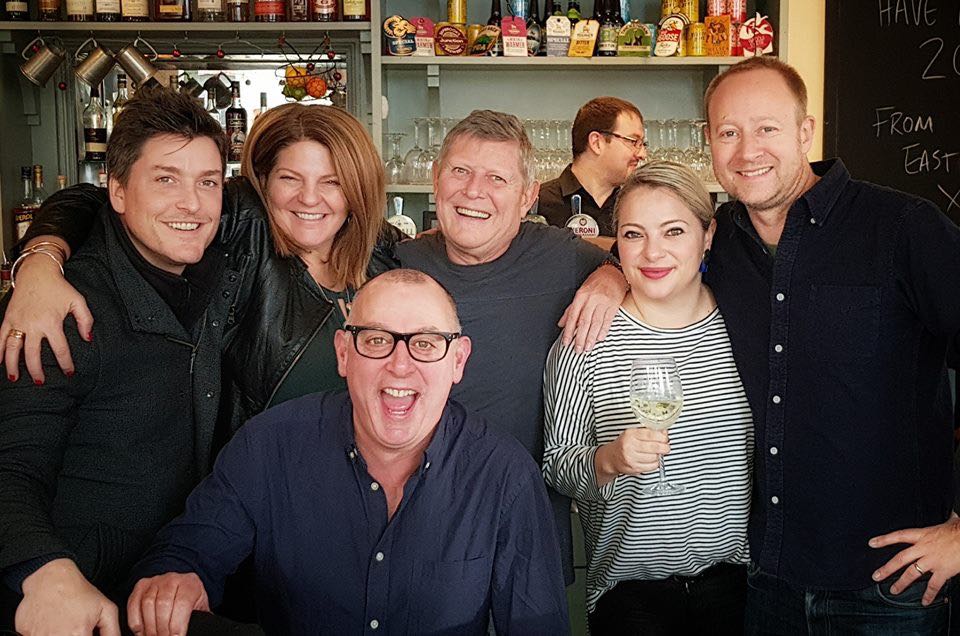 Lori Moggy: "His courage and strength is truly inspirational."

WWSD? What Would Steve Do? This is certainly a question I have asked myself quite a lot recently. Steve lived a big life that I was very fortunate to be a part of. He was not just my friend but my confidant, mentor and someone who taught me not too take things to seriously. If I ever needed cheering up having wings and pints of beer with Steve at the Shed always did the trick.

Steve was brilliant at branding and marketing, and was so creative in the concepts he developed. He loved the fast pace of Shanghai and the excitement of not knowing what was coming next. 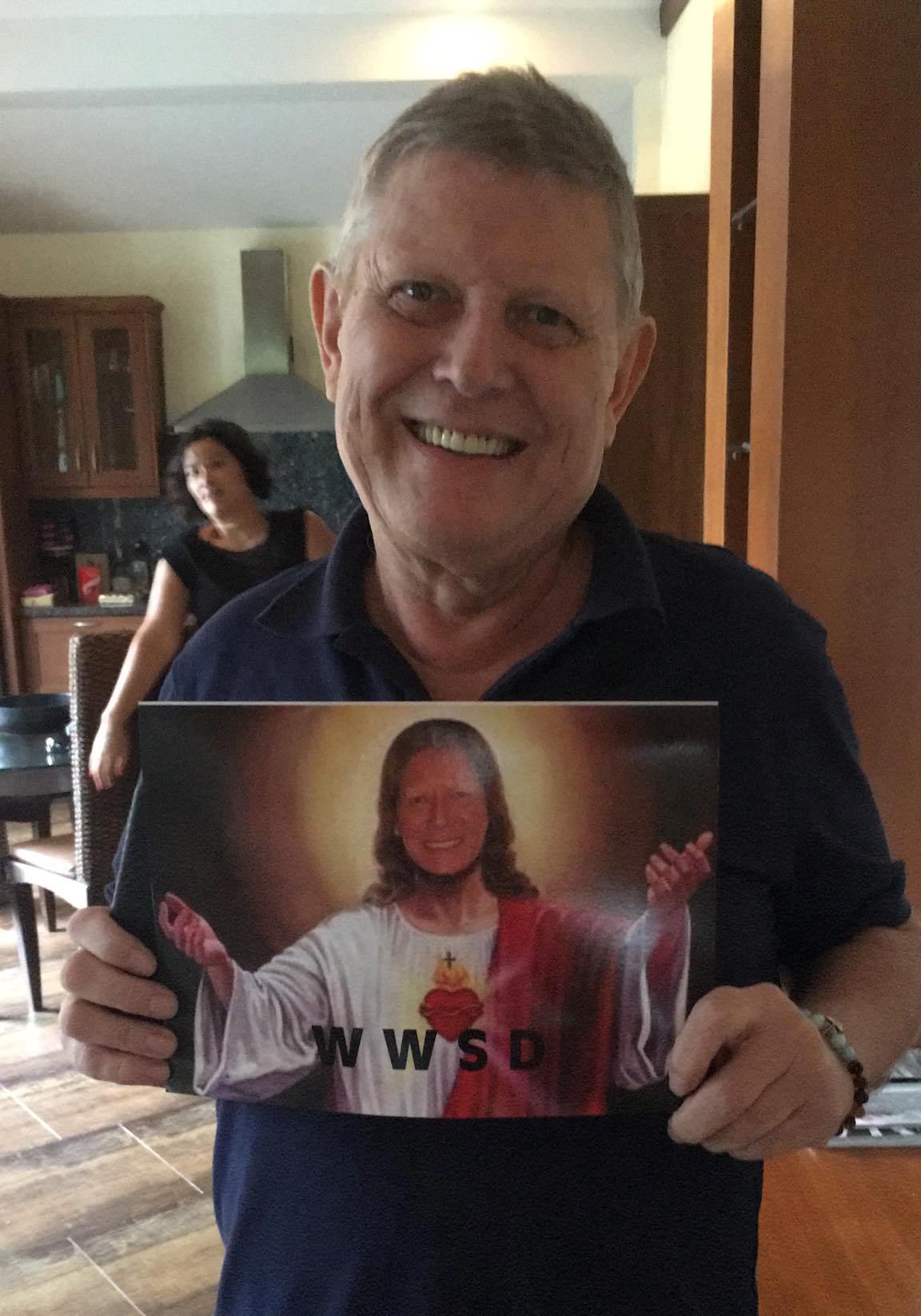 Around Shanghai, Steve was known as the photographer! We could always count on him to capture the best moments, crop and edit the photos just right before posting make sure everyone looked fabulous.

In 2015 Steve moved to Koh Samui to work on his new business venture. The Shanghai community was certainly sorry to see him go. But it didn't take long before Steve was a dominant figure on the Samui social scene and living the dream!

When Steve was given his diagnosis he choose to live his remaining days like he always did – everyday to the fullest. His courage and strength is truly inspirational. 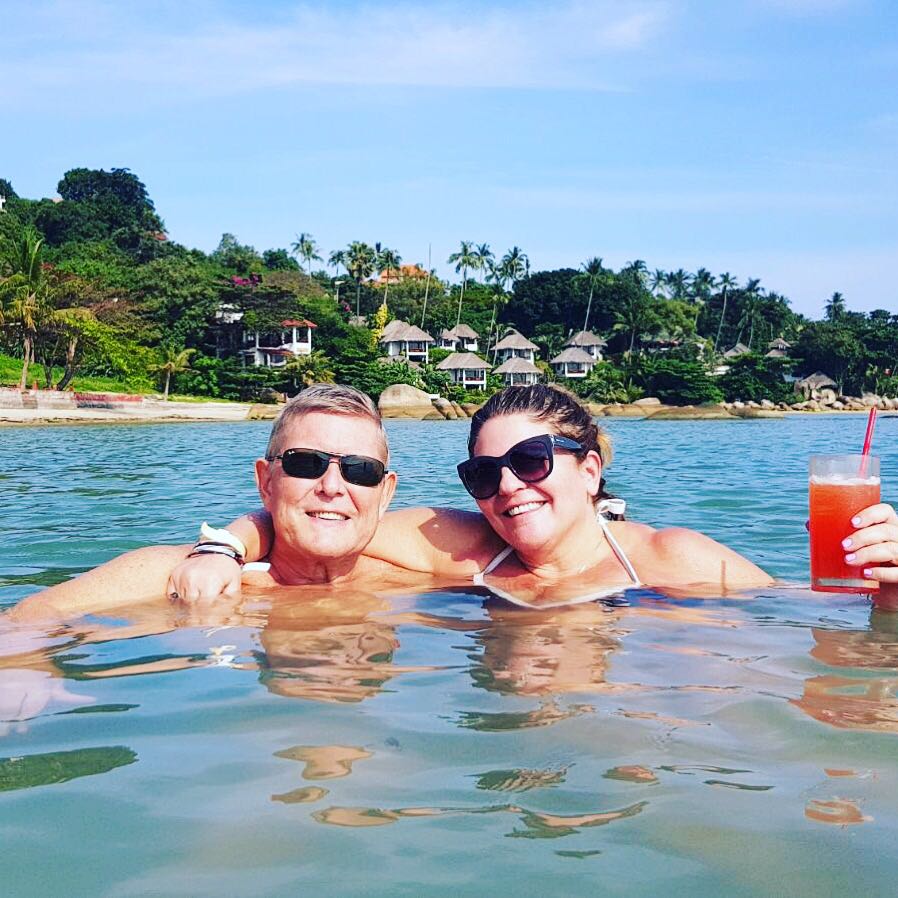 Steve was one in a million, a true legend! He will be missed by so many people from Shanghai, England, Amsterdam, Hong Kong, Samui, Bangkok, Singapore, Australia, California, New York, Canada and many other places in the world. He will live on through all of us in stories, photographs and many memories. How could we ever forget that amazing smile and infectious laugh.

WWSD... he better be dancing into the next journey with a charge packet and vodka in hand. 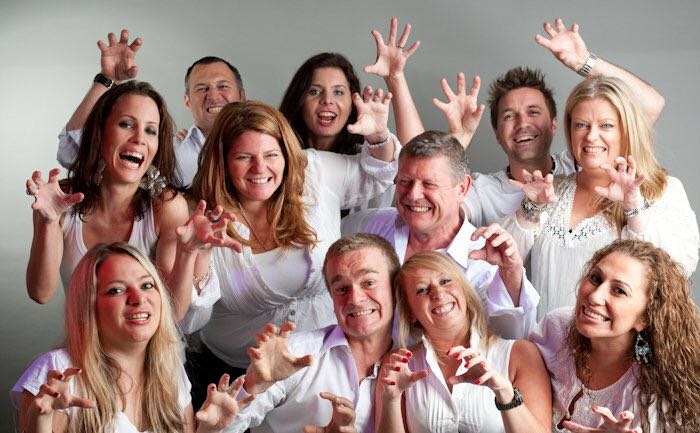 Max Myers: "The creative world has lost a star, and it will be forever noticed."

Everyone knows Steve's electrifying personality, which infected people around the globe. Not as many know his professional side as he was very good at keeping his two sides independent.

I worked daily with Steve for a good six to seven years in multiple markets, and he was the consummate professional. He developed amazingly clear brands, products, marketing strategies from scratch, and delivered with precision.

The creative world has lost a star, and it will be forever noticed. Hats off old friend. 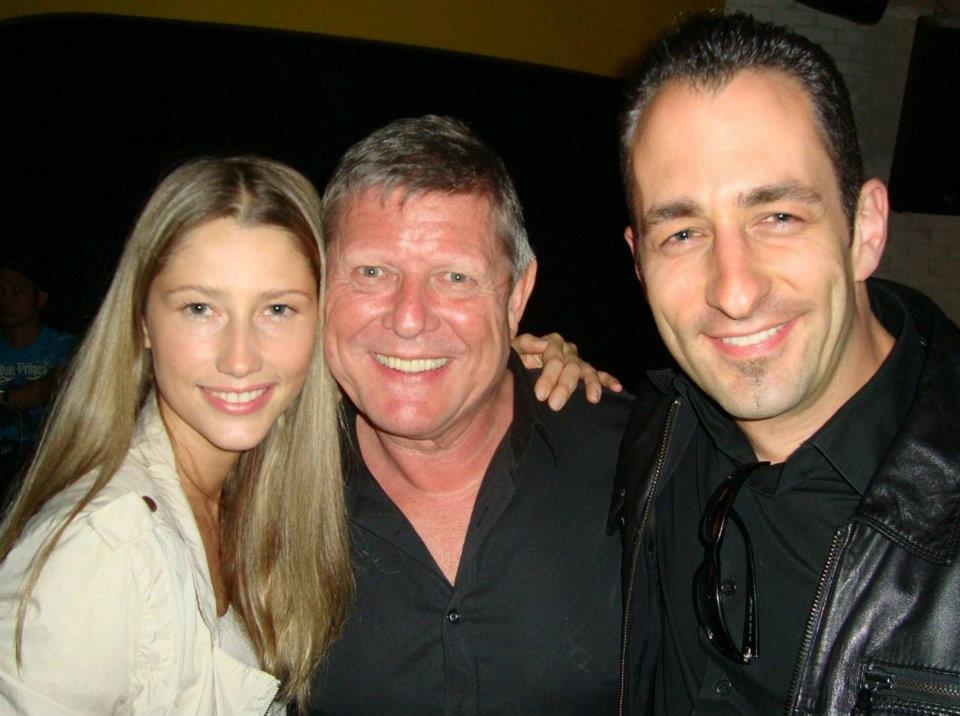 Samantha Nassar: "From concert roadie to advertising guru, freelancer to actor to caviar expert, he knew and did it all."

How do you start an introduction for a man like Steve?

For those that knew him, they would describe his love for life, his hunger for partying and his weakness for good looking women. One may have described him as an English Hugh Heffner; but Hugh had nothing on Steve. 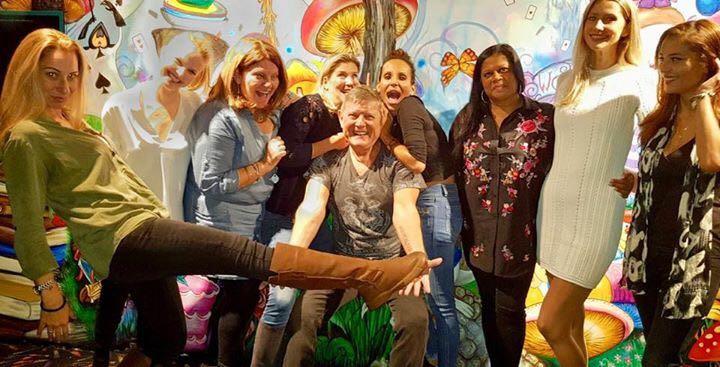 Steve’s stamina seemed to get stronger as he got older. Over the 11 years I knew him he never aged or complained. He would find a new adventure in every single day in some way. Just a phone call from him to meet for lunch or dinner meant pack your heels, a party was about to begin. 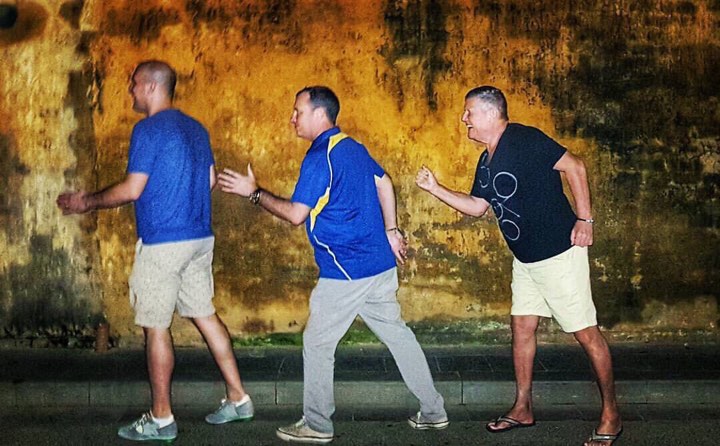 From the minute he entered a room he brought excitement and life. His passion for everything brought light to any dark corner, even in Dragon at 6am. Without knowing he was there, you could distinguish his infectious laugh from the other side of the room, bringing joy and cocktails to every woman he met.

From concert roadie to advertising guru, freelancer to actor to caviar expert, he knew and did it all.

He photographed and documented every moment spent with friends and splashed them over social media for the thousands of his worldwide fans to see. It labeled him the party animal, the social butterfly, and to most The Legend! 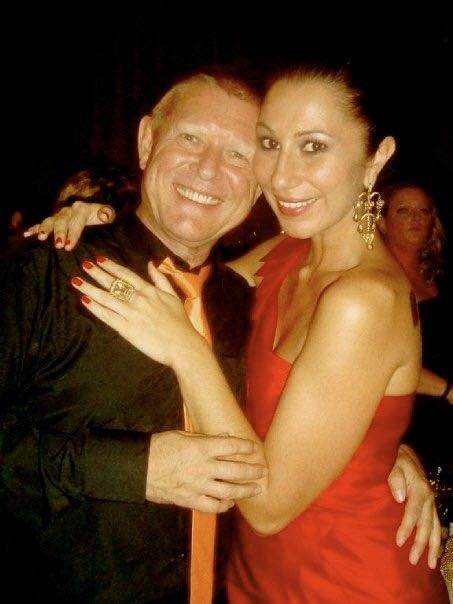 Jeremy Simpson: "After work, he was an exhausting riot – his restless enthusiasm was unstoppable."

Steve frequently came to the Philippines to develop the products for ACC. He was a delight to work with – he understood what my ex-factory could do, and he pulled the best out of it. He was hugely imaginative and very positive, and he set the scene for them to be successful.

After work, he was an exhausting riot – his restless enthusiasm was unstoppable. He was generous, gregarious and pretty silly - until he met the very sweet Grace, who tamed him and let a gentle caring heart peek out from behind the bravado.

I really thought he might have married her, but Thailand called and he was gone. Her sad loss – but he looked after her. I saw him only once again – my loss. We've all lost a star. 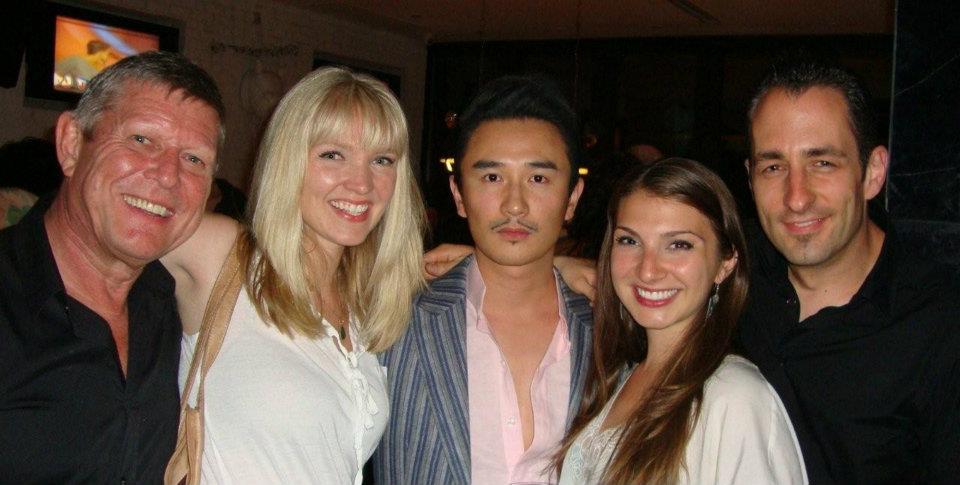 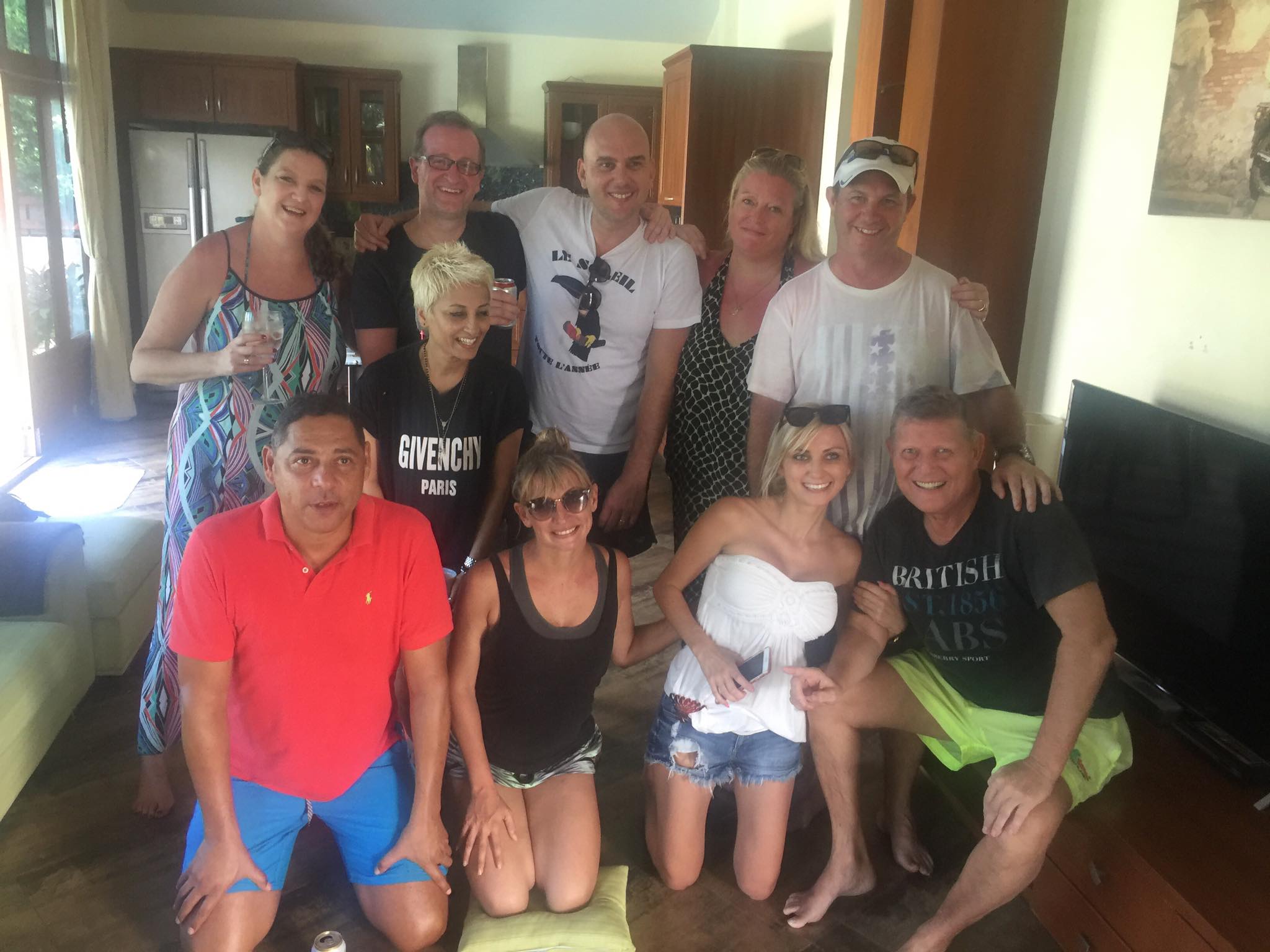 Anna Patterson: "Soon enough he joined me on stage with five burlesque dancers."

The AustCham Ball in 2009 and the theme was Boom or Bust. In true Steve fashion he came as a homeless man – best costume as always. He had a sign that ignited every person he met with laughter, and solicited donations at the same time. 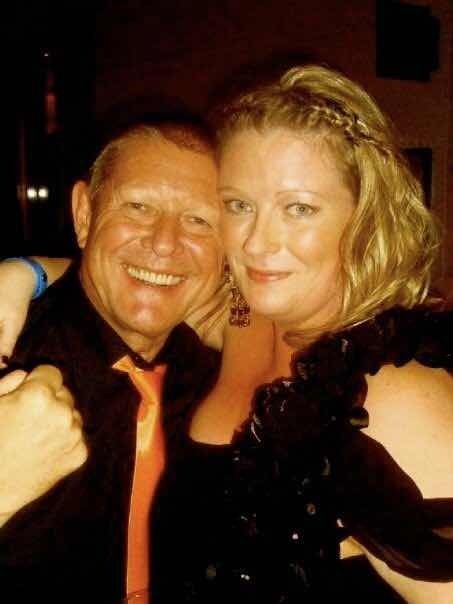 During the night a there was a musical interlude, and soon enough he joined me on stage with five burlesque dancers. Leo Fowler also joined him, and he entertained the 600 plus strong crowd like Robbie Williams at a Stadium Concert, and had them all laughing and singing along.

He was a true gentleman, a good friend and knew how to ignite a room with his smile. 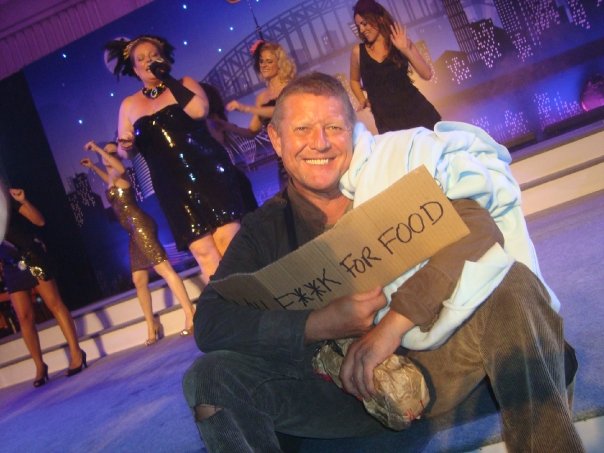 There will be a memorial for Steve Hinchliffe on Saturday March 31 from 3-7pm at The Hustler's Lounge. 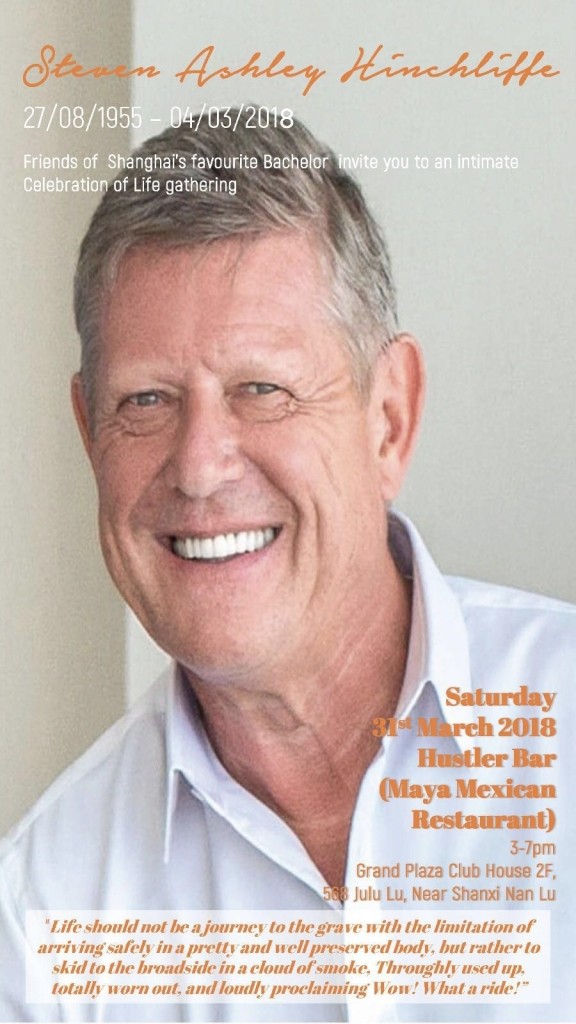 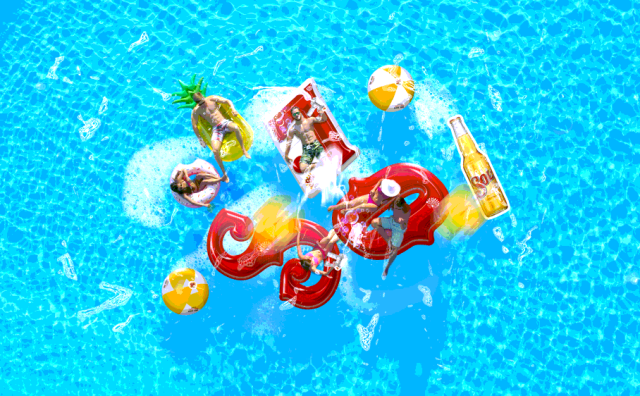