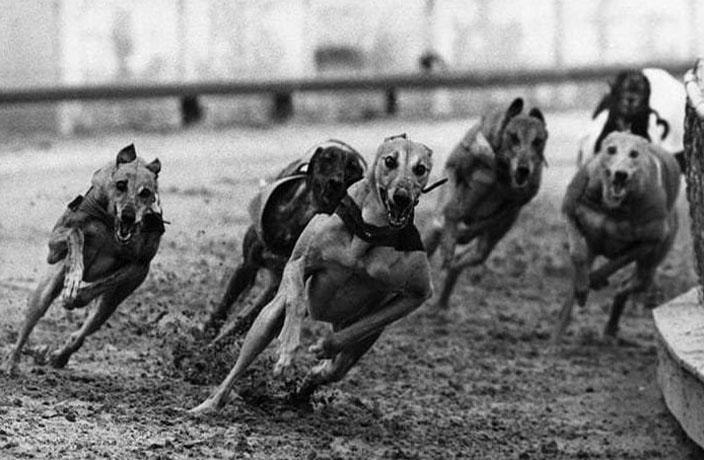 Greyhounds, monkey jockeys, football riots, dance floor brawls, political rallies, mass executions and denunciations – the theater at Shanghai Cultural Square has a lot of catching up to do if it is to eclipse the history of the old Canidrome.

Located on Rue Lafayette (now Fuxing Zhong Lu) it occupied a large portion of the block formed by what are today Jianguo Lu, Shaanxi Lu, Fuxing Lu and Maoming Lu in the former French Concession. 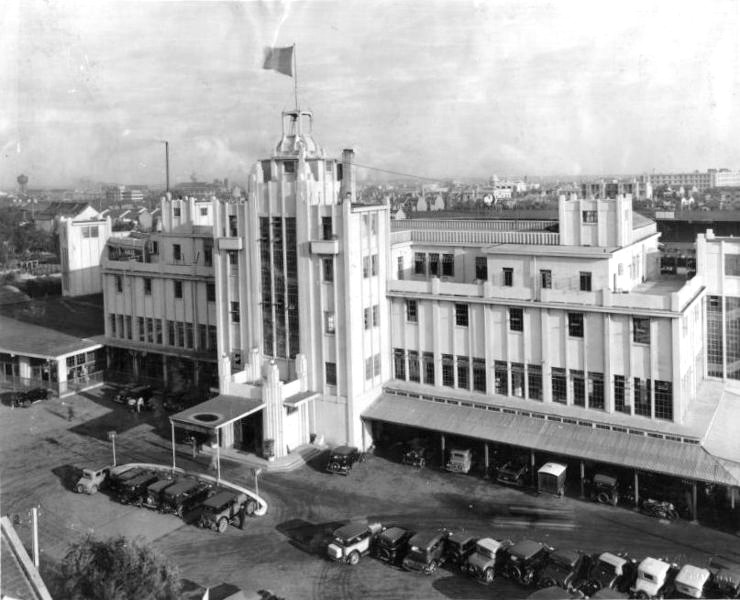 The original 50,000 spectator stadium structure was built in 1928 for the purpose of dog racing, largely financed by Henry E. Morris, Jr., proprietor of the North-China Daily News, who had a large mansion close by and, along with his two brothers, would walk his dogs over to the Canidrome for race meets.

The location was also due to legal reasons, as explained in Graham Earnshaw’s Tales of Old Shanghai:

‘Going to the dogs’ is literally a favourite diversion of Shanghailanders. Dog racing is not allowed in the International Settlement, and the importation of greyhounds has been prohibited by the Chinese Government, but the sport flourishes at the Canidrome in the French Concession, where greyhounds are bred, and, like pony racing, offers ample opportunity to those who would woo fickle fortune. By various combinations, big winnings, or big losings, are possible.

As the years progressed, the venue became a multi-purpose entertainment venue. Interport rugby games between Shanghai and Hong Kong were held there (read a history of Shanghai rugby here), as was the Basque game jai alai (or hai-alai, as it was referred to in Old Shanghai).

"Hai-alai has many followers and is as good a way to lose your shirt as we know of,” write Maurine Karns and Pat Patterson in their 1936 Shanghai: High Lights, Low Lights and Tael Lights. "You can lay a bet here just as easily as you could get converted at the Methodist Mission. Hai-alai is an old Basque game, and the town is filled with Basquards who have been imported to lend the local game an authentic touch.”

Soccer matches were also staged there. On March 15, 1941 a game between the Shanghai Municipal Police and a Chinese team turned into a riot, causing 20,000 Chinese spectators to flood the field and numerous injuries reported.

Around the same time quite a curious practice was introduced to dog race meets, as author Paul French explains on his blog ChinaRhyming:

In 1940-1941 business at the Shanghai Canidrome in Frenchtown was down. Of course it was the war and navigating the streets with unfriendly Japanese around wasn’t much fun, while plenty of foreigners and high rolling Chinese had gotten out of town. There were also a rash of new casinos in Frenchtown and the adjacent Badlands in the Western Roads Area to attract gamblers. Dogs chasing round a track after a hare wasn’t going to do it.

And so… monkey jockeys. Which genius actually came up with the idea I have no idea but once word got round town that the Canidrome was having monkey jockeys the crowds flocked back, at least until the novelty wore of. I don’t know where the monkeys came from or whether they were good jockeys, but they certainly looked pretty snazzy in their wicked little jockey caps.” 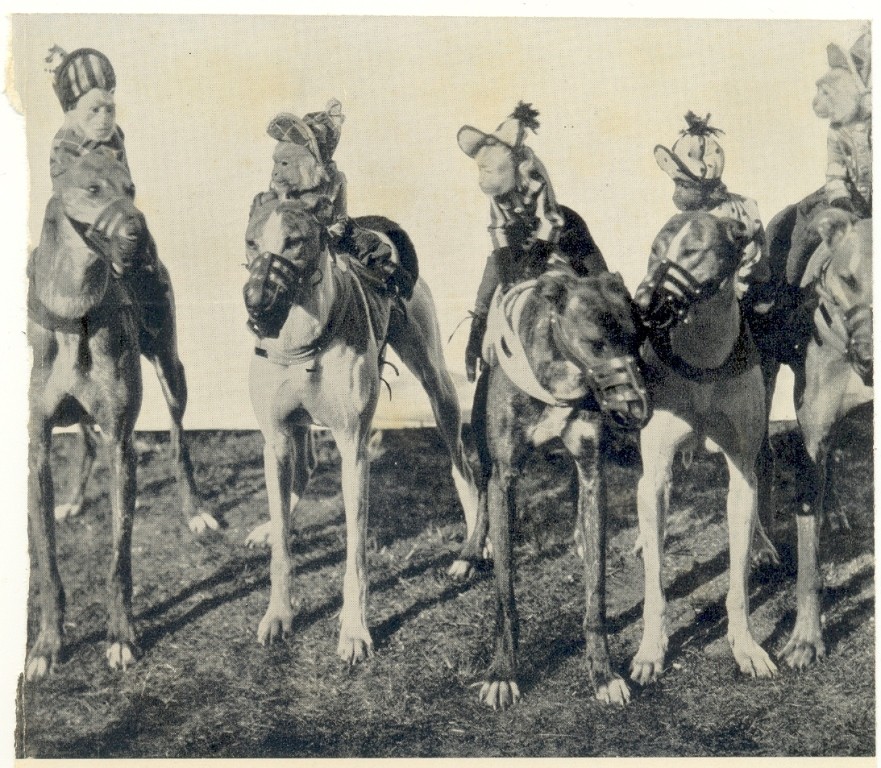 French also found this advertising flier for a boxing bout at the Canidrome in June 1937 featuring Andre Shelaeff, a Shanghai-born White Russian welterweight who was based in Harbin, where his father was a Russian priest. 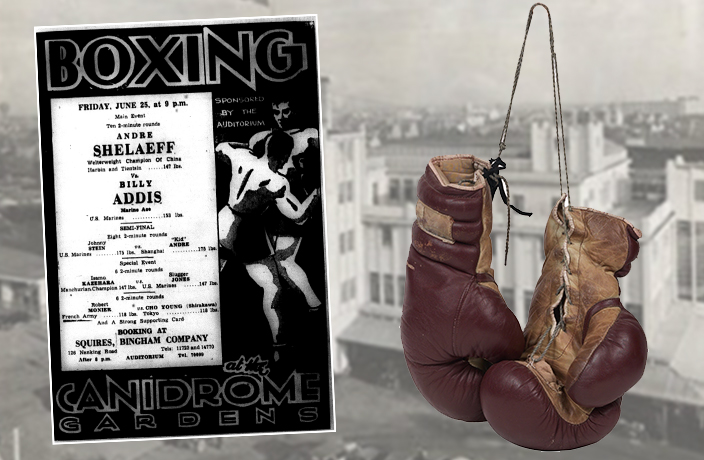 Shelaeff fought at the Canidrome several times in 1937, regularly KOing opponents. He left China to pursue his career, but died the next year of brain concussion after a fight with Massachusetts boxer George Salvador aged just 19 (read French's history of Asia's inter-war boxing right here).

French has also written about The Canidrome Tower Gang, led by soft-spoken Mexican Carlos Garcia, "the closest to a cappo di tutti capi (‘boss of all bosses’) the foreign gangs of Shanghai ever had.

"He was effectively the big boss, and adjudicated disagreements between the city’s foreign gangs in the hope of averting internecine fights – and he was mostly successful. A total legend."

The Canidrome also played host to a ‘China Bowl’ game of American football in 1945, in which the Navy beat the Army 12-0.

“It was strictly G.I.: 10,000 uniformed Americans jammed Shanghai's Canidrome,” reported Time, who go on to tell us that, “Plans for defense and kick-off drill on the day before the game were frustrated when the players arrived to practice on the Shanghai race course. The reason: the city government was shooting six criminals on the field.”

You can read about the China Bowl in detail right here. 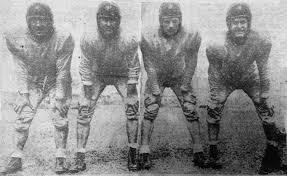 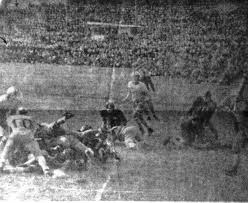 The Canidrome ballroom was also extremely popular. African-American jazz pianist Teddy Weatherford played there in the mid-‘30s, as did his countryman jazz trumpeter Buck Clayton, who performed with his Harlem Gentlemen.

Clayton's experience in the east was unique; as a black man he was discriminated against by fellow American marines who were stationed in Shanghai (there are accounts of him being attacked by soldiers, including an instance where bricks were thrown at him), while as an American he was treated like an elite by the Chinese.

Clayton performed for Chiang Kai-shek's wife, Soong Mei-ling, and her sister Ai-ling, who were regulars at the Canidrome, and also worked closely with Li Jinhui, the “Father of Chinese popular music.” Clayton would play a number of songs that were composed by Li, while Li learned a great deal from the American jazz influence brought over by Clayton. 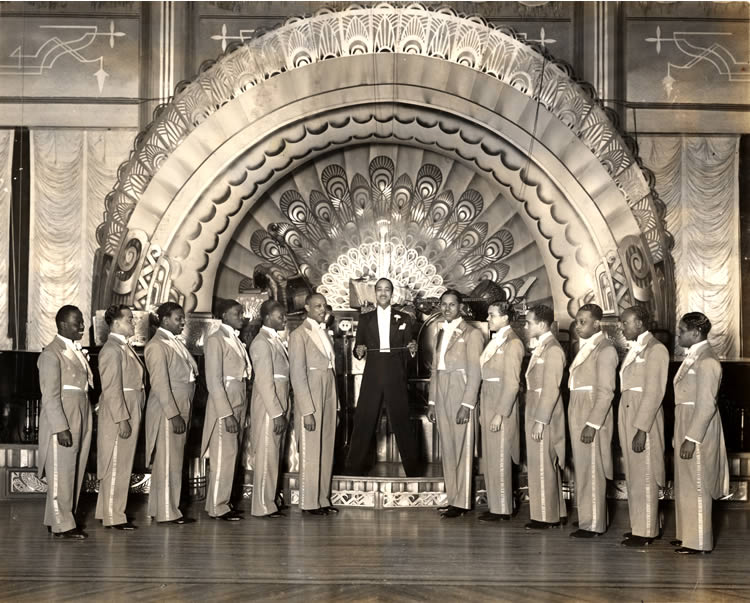 Buck Clayton and his Harlem Gentlemen

Clayton tenure at the Canidrome ballroom came to an end after a fight one night with colorful Old Shanghai character Jack Riley (who was to become “the slot machine king of Shanghai”), as reported in a newspaper at the time:

The place is the Canidrome. The time is 11pm Tuesday. Mr. Jack Riley, ex-American sailor, who at one time was No. 1 at Riley's Bamboo Hut, now transformed into the Venus, and who a year ago sold his Manhattan Bar, famous gathering spot for the Asiatic Fleet, is sitting at a table with two girls.

Some say Riley did not like Clayton's smile, others that Clayton asked Riley to tone down. Anyway blows were struck and Buck Clayton fell. Silence for a minute, then members of the band made for Mr. Riley.

The spotlight switches to the dance floor. Riley is eagle-spread and reports indicate that one of the band members sat on his chest and proceeded to pummel him. There was no panic because the very few guests that were there did not know whether it was part of the floor show or not.

The curtain came down on this scene all too quickly, the battle being halted before it became serious. Casualties reported: Riley, slightly swollen face, plenty of body bruises; Clayton, a black eye; other musicians minor bruises...

Buck's contract with the Canidrome was terminated because of the incident, and he returned to the states before the outbreak of the Second Sino-Japanese War in 1937. 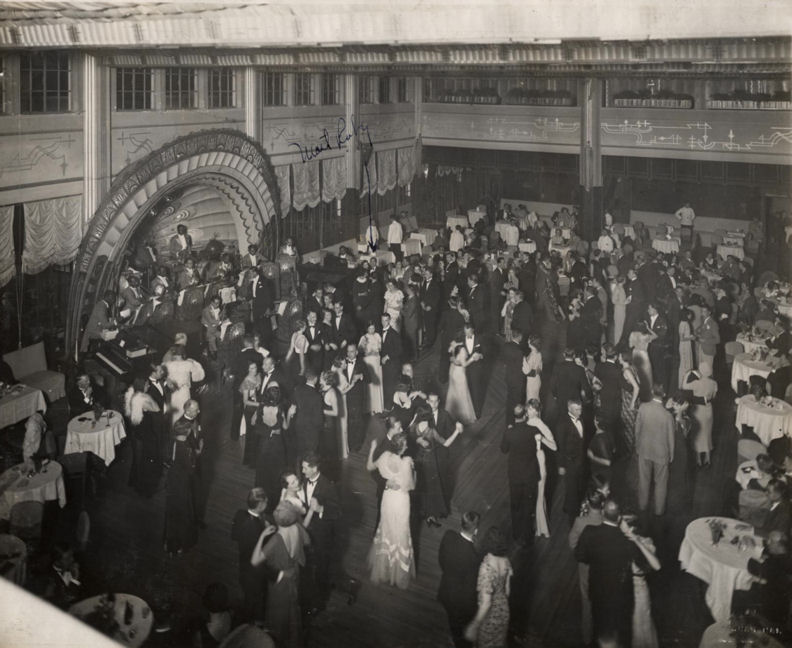 After 1949, greyhound racing, like other forms of gambling, was banned by the Communist party, and the precinct's name was changed to the Shanghai Cultural Square. It became a place for political rallies, and Mao himself would take to the stage there to address crowds numbering in the thousands.

The Canidrome was also used as a mass execution facility. Executions were selected by a committee of 24 Communist-appointed civic leaders – in April 1951 more than 3,000 people were arrested and herded to the stadium, including former-Green Gang leader “Pockmarked” Huang Jinrong, while on May 1 alone some 500 executions were announced. 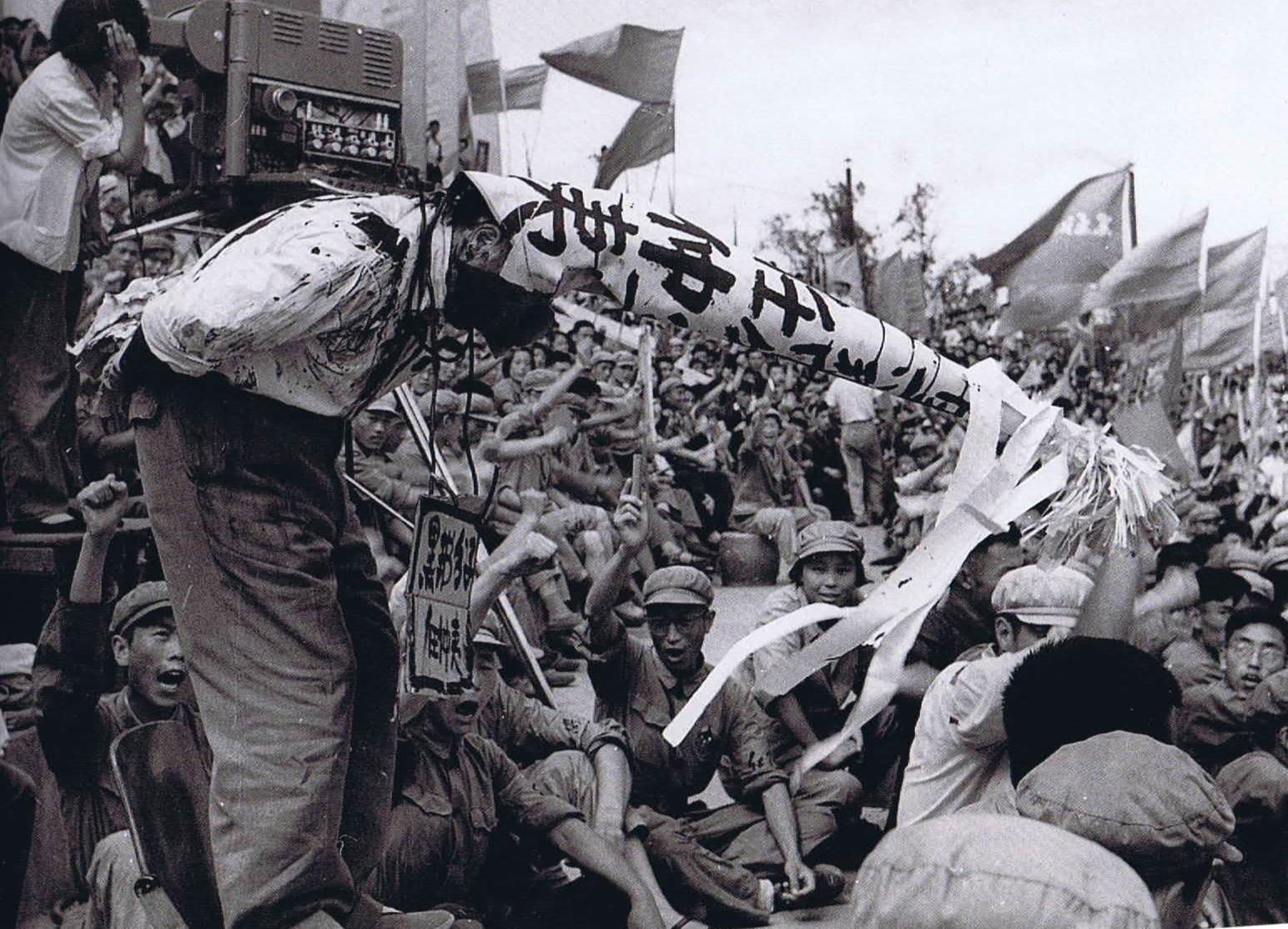 The Xinhua News Agency reported that Shanghai high-school students marched beside the prisoners on their way to execution beating gongs and drums and chanting “Kill nice! Kill them well! Kill all of them!”

“10,000 people gathered and (as the Shanghai News reported it) demanded the death of the accused in ‘a unanimous roar.’” reported Time.

During the Cultural Revolution, the Cultural Square also became a venue for struggle sessions, where Red Guards denounced class enemies, intellectuals and figures of authority.

After the end of the Cultural Revolution, the Cultural Square served a number of purposes. Its auditorium was used as performance space for films and theatre, and it was also used as a conference venue, often housing political conferences and meetings.

The Shanghai Stock Market was based there for a short time when it reopened in 1990, and then in 1997 the area became the location of the Shanghai Flower Market.

In 2003, a series of international design competitions were held, and a plan was adopted to rebuild the precinct as a park. The original grandstand, along with most of the other structures in were demolished in 2005, and in their place was built the RMB1.1 billion, 2,011 capacity, 65,000 square meter, theater that resembles a giant white horseshoe crab. 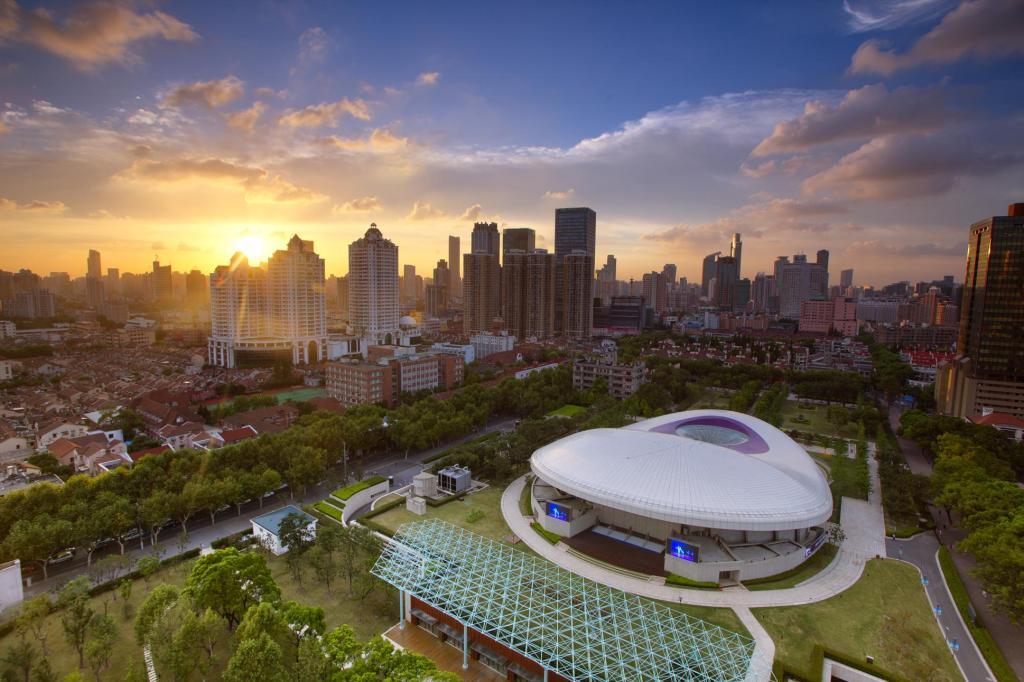