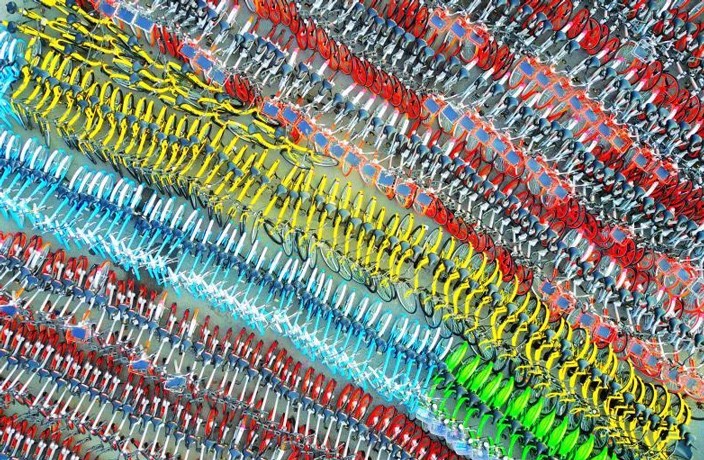 READ MORE: This Chinese 'Uber for Bikes' App is Taking Over SXSW

With numerous bike-sharing companies now vying for riders' attention, it’s easy to see why they’re booming in popularity. The bikes are are a cheap and easy way for people to get around the city and an environmentally-friendly alternative to cars.

But as more and more companies add new colors to the bike-share rainbow in hopes of cashing in on the bike-share craze, local governments are finding it difficult to control illegal parking and ensure traffic runs smoothly in China’s crowded cities. 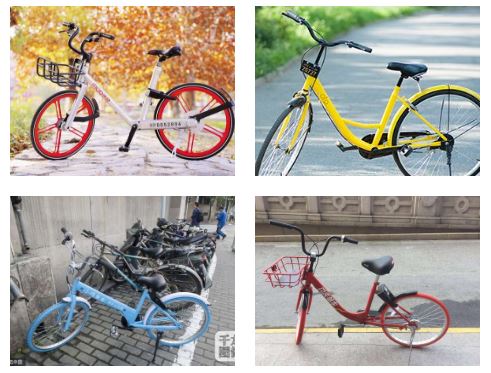 The photos, taken with a drone, show Huangpu District's overflowing bike-share graveyard, which officials set up to store bikes seized for being illegally parked. 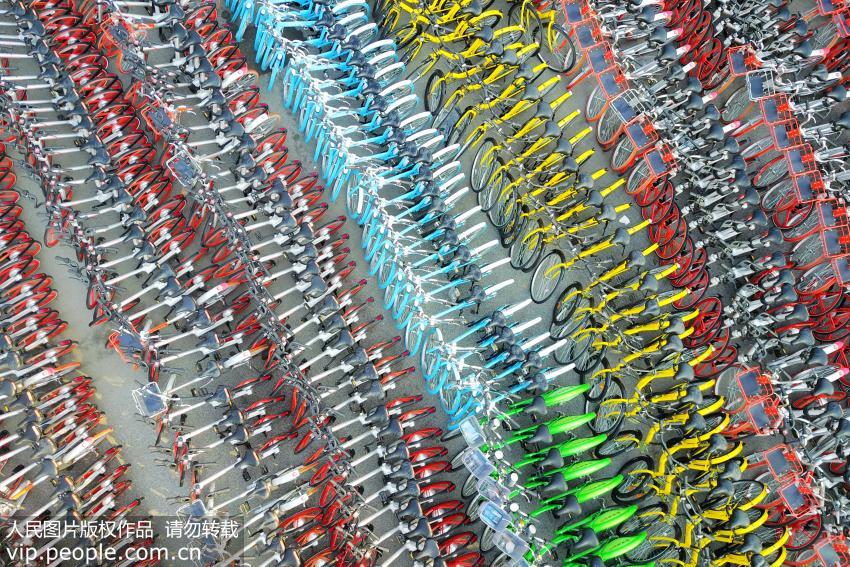 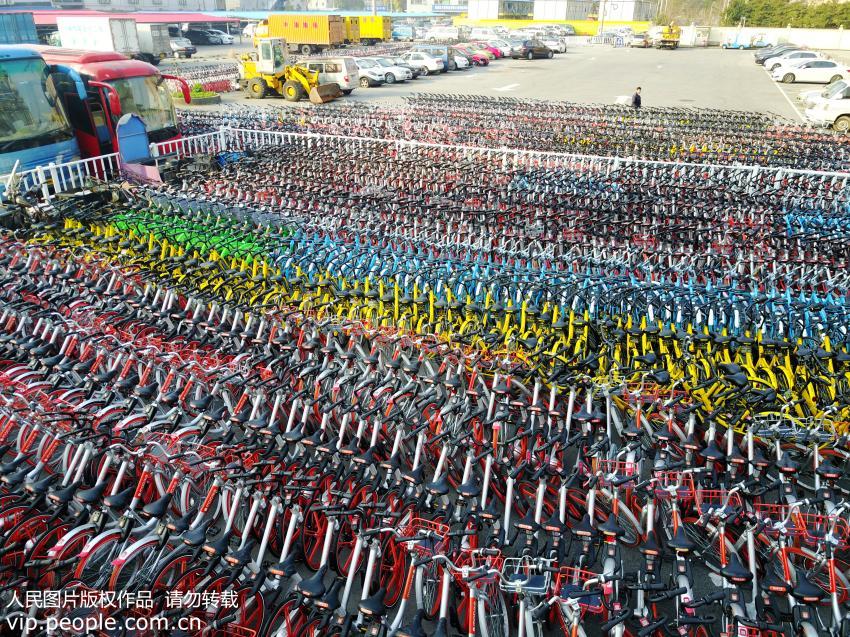 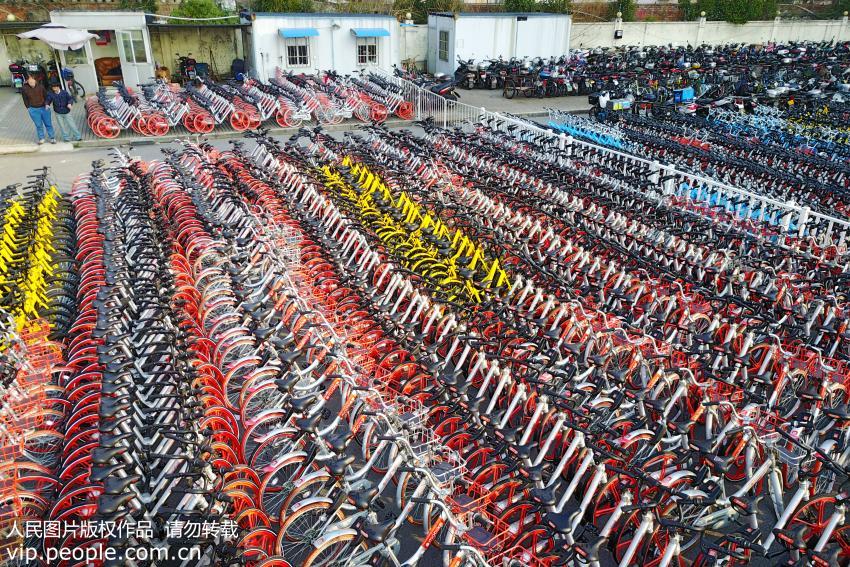 The graveyard is roughly the size of a basketball court and contains over 3,500 orange Mobikes and roughly 500 of other brands.

That’s not the only issue causing woes for traffic authorities. Faulty GPS systems and apps that don’t recognize bike malfunctions have led to problems with consumers.

And as more competing rental companies hoping to become the ‘Uber of Bikes’ throw their hats into the ring, incidents of vandalism have been on the rise. In January, around 500 ride-share bikes thrown into two large piles were left smashed, bent and mostly unrideable in Shenzhen. 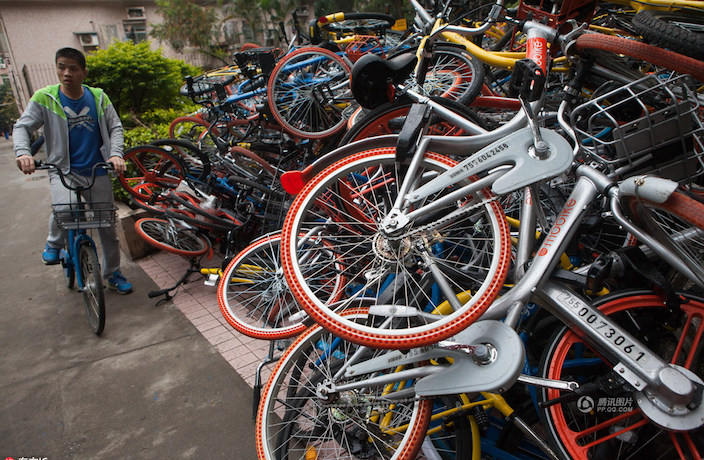 And last fall, a man was arrested by Shanghai police after a video emerged of him destroying and dumping several Mobikes into the Huangpu River. But what did the Mobikes ever do to you?!

As the war between bike-share apps heats up, Shanghai authorities have started cracking down. This week, the Shanghai City Commission for the Development of Public Rental Bikes requested eight leading bike-share platforms to cease distributing new bikes around the city. (Zaijian, Mobikes with adjustable seats?). Both Ofo and Mobike deny that such talks occurred.

The Shanghai Municipal Bureau of Quality and Technical Supervision is also reportedly finalizing new regulations that will monitor the service of the platforms and technical functions of the bikes. The regulations will go into effect following public input.

Among the new rules are requirements for all bikes to be equipped with GPS and a function that will allow users to track lost and stolen ones. The bikes must also be retired after three years of service.

That could potentially be problematic for Mobike, which has bikes with three- to five-year lifespans, and Ofo, which currently has no GPS-enabled bikes in circulation.

Here's a draft of the regulations, via the Global Times:

Requirements on users: The height of the user should be within the limit of 1.45 meters to 1.95 meters; and the age range from 12 to 70. People older than 70 years can apply for use by submitting a health certificate annually to service providers.

Compensation time limit: Acknowledging the judicial fact that a user is harmed while using a shared-bike, the service provider should pay compensation within seven days.

The crackdown is all part of a larger move to clean up Shanghai’s traffic. In addition to curtailing rental bikes, Shanghai also banned all unlicensed electric motorbikes on March 1.