While Japanese prime minister Shinzo Abe may have been sensible enough to avoid the controversial Yasukuni Shrine this week, Canadian popstar and egging enthusiast Justin Bieber was not.

Beiber posted a photo to Instagram of him standing before the shrine with the caption "Thanks for your blessings."

The Yasukuni Shrine, which honours Japan's war dead, is where many WWII war criminals are interred, and is a flashpoint for controversy between Japan and its neighbours (who suffered atrocities committed by those very same war criminals during Japanese occupation).

Several Chinese and Korean Beliebers took to the Instagram comments to castigate Bieber for his lack of sensitivity regarding the shrine:

jingxianeiko: Wtf!! JB! What are you doing mother fucker?!!

justinwanbieber: The Yasukuni shrine is dedicated to kill countless Chinese prisoners. Japanese planned Nanjing massacre killed tens of thousands of people China Please face up to history . As a Chinese Belieber . i am so sad that you visit the YasKuniShrine .

A spokesperson for China's foreign ministry responded to Bieber's visit at a regular press conference Wednesday.

"I don't know the political stance of this Canadian singer, but China's view on Japanese leaders visiting the Yasukuni Shrine is clear and consistent," Qin Gang said. "I hope this singer can learn more about the history of Japanese militarism, and the wrongful historical and militaristic views promoted by the shrine after the visit."

Update: Two photos from the shrine have since been deleted from Bieber's Instagram. 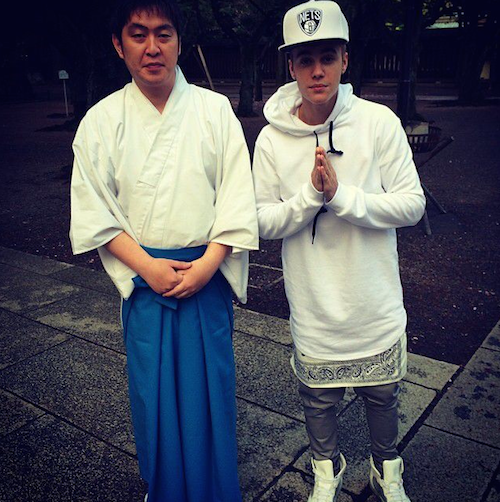 US and Philippine officials aren't convinced.