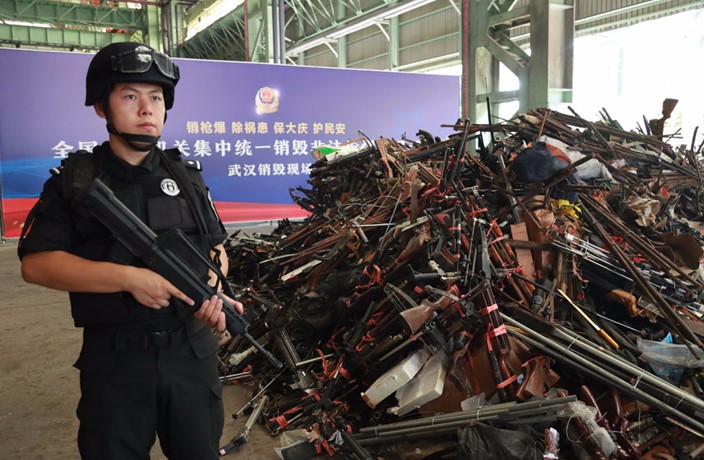 Chinese police have destroyed over 107,000 illegal guns, explosives and detonators in 154 cities across the country. On Monday morning, confiscated weapons were destroyed and melted in a steel plant furnace in Wuhan.

The recent crackdown focuses on the online market and e-commerce platforms that still sell illegal weapons. The law has extended to air rifles, replica guns and toy pistols.

This year’s crackdown is not the first of its kind. Last September, authorities led a similar crackdown in 146 cities. The confiscated weapons were said to be converted into steel to construct motorways and bridges.

China already has some of the world’s strictest gun control laws. From 2002 to 2016, the number of homicides decreased from 26,000 to 8,600. Only a select number of people are allowed to possess weapons, with permission from the military or police.

Private gun ownership is illegal, and perpetrators face up to seven years in prison. Even hunting rifles, common in villages, are now banned. Those convicted of smuggling weapons into the country can face life in prison.

Gun and explosives-related crimes have occurred sporadically around the country, but have generally declined significantly due to police efforts. Beginning in February 2018, the government launched a two-year campaign against weapons-related crimes. In the massive crackdown, police have solved over 16,000 related cases and apprehended over 17,000 suspects this year alone. In 2018, there were over 30,000 gun and explosives-related cases.

In 2015, a man from Sichuan was sentenced to life behind bars after buying 24 replica guns from Taiwan, although his sentence has since been shortened to just over seven years. In 2016, a woman from Tianjin was sentenced to three and a half years for buying nine air rifles for use at her booth at a fun fair stall. In 2018, a man was sentenced to 13 years in prison for producing toilet handles that resembled guns.

Government regulations define an illegal firearm as a weapon capable of firing a projectile at 16 joules per square centimeter. Guns are generally defined as firearms with muzzle kinetic energy over 1.8 joules per centimeter, while that of Hong Kong is two joules. Lawyer Xu Xin, who represents two citizens sentenced to prison for buying replica guns, believes that the standard punishes people “for owning replica guns that are not lethal weapons.”

The popular news app, which touts itself as the ‘porter of news,’ is no stranger to pornographic content crackdowns.