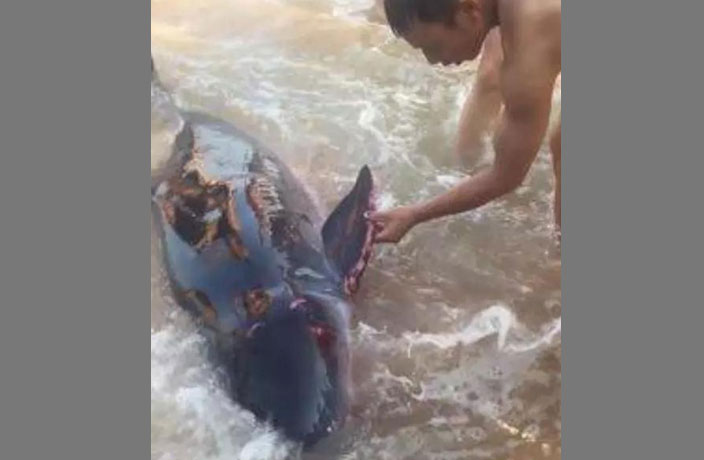 At around 4pm on May 23, tourists and sunbathers at Daya Bay, located near Huizhou, were surprised to find a whale stranded on the beach. The marine mammal, initially suspected of being a dolphin but later identified as a dwarf sperm whale, was pushed back out to sea by beachgoers and on-site security officers.

A report by Southern Metropolis Daily states that over a dozen people joined in the rescue effort, using their hands to spread seawater over the cetacean to help moisten its skin before pushing the animal to deeper water. The animal eventually swam away on its own.

Southern Metropolis Daily notes that the whale had red blotches and scars on parts of its body.

According to staffers at the Daya Bay Fisheries Provincial Nature Reserve Management Office, dwarf sperm whales are “very rare” in the waters around Daya Bay. The species is known to generally live in deeper water near the continental shelf, according to the Whale and Dolphin Conservation website.

It is unknown what brought the cetacean into Daya Bay, although fisheries’ staff have suggested the animal may have strayed into shallow water while hunting. Dwarf sperm whales feed on deep-water squid, crustaceans, octopus and fish.

In the hours after the whale swam back out to sea, workers with the Marine Protection Unit surveyed the ocean and coastline near the site of the beaching and essentially “ruled out the possibility of it being grounded again.”

Daya Bay was the site of another stranding last year, when a pregnant sperm whale got tangled in a fishing net, before dying near shore with a “mouth full of garbage.” The cetacean fetus was retrieved from the mother’s carcass during an autopsy. Tragically, experts stated that the fetus was well-developed and had the mother not died prematurely, the baby might have been born in a few days.

READ MORE: The Rise of Whale and Dolphin Captivity in China