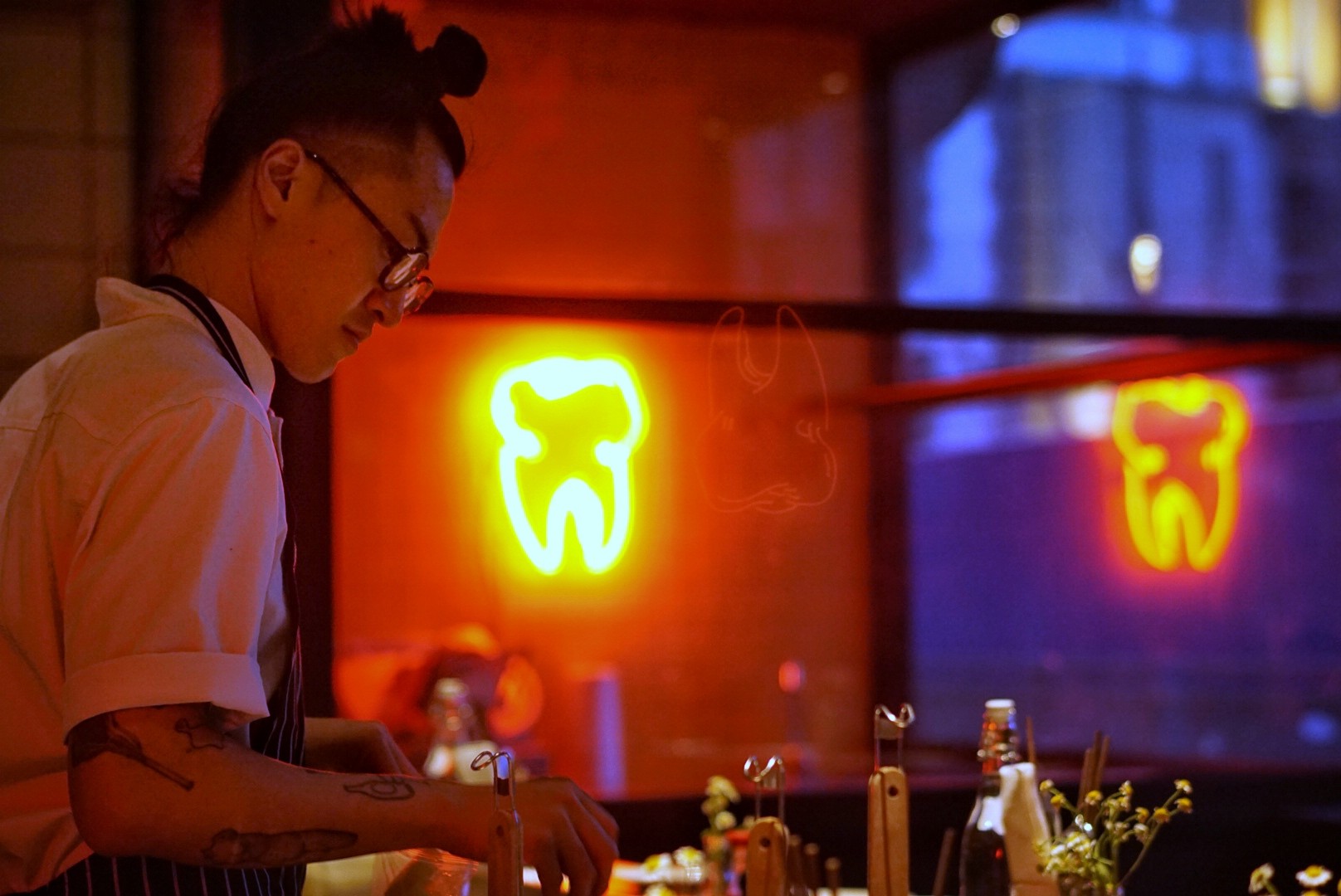 Named after the Chinese word for ‘tooth,’ the goal is to serve perfectly al dente, toothsome pasta – with that springy chew you’d expect from an Italian restaurant – but incorporating Chinese flavor profiles.

Yaya also has a connotation with family – meaning ‘grandma’ in Greek and ‘grandpa’ in Shanghainese – further linking the name to the goal of making honest, homey dishes that act as comfort food with a dose of surprise. 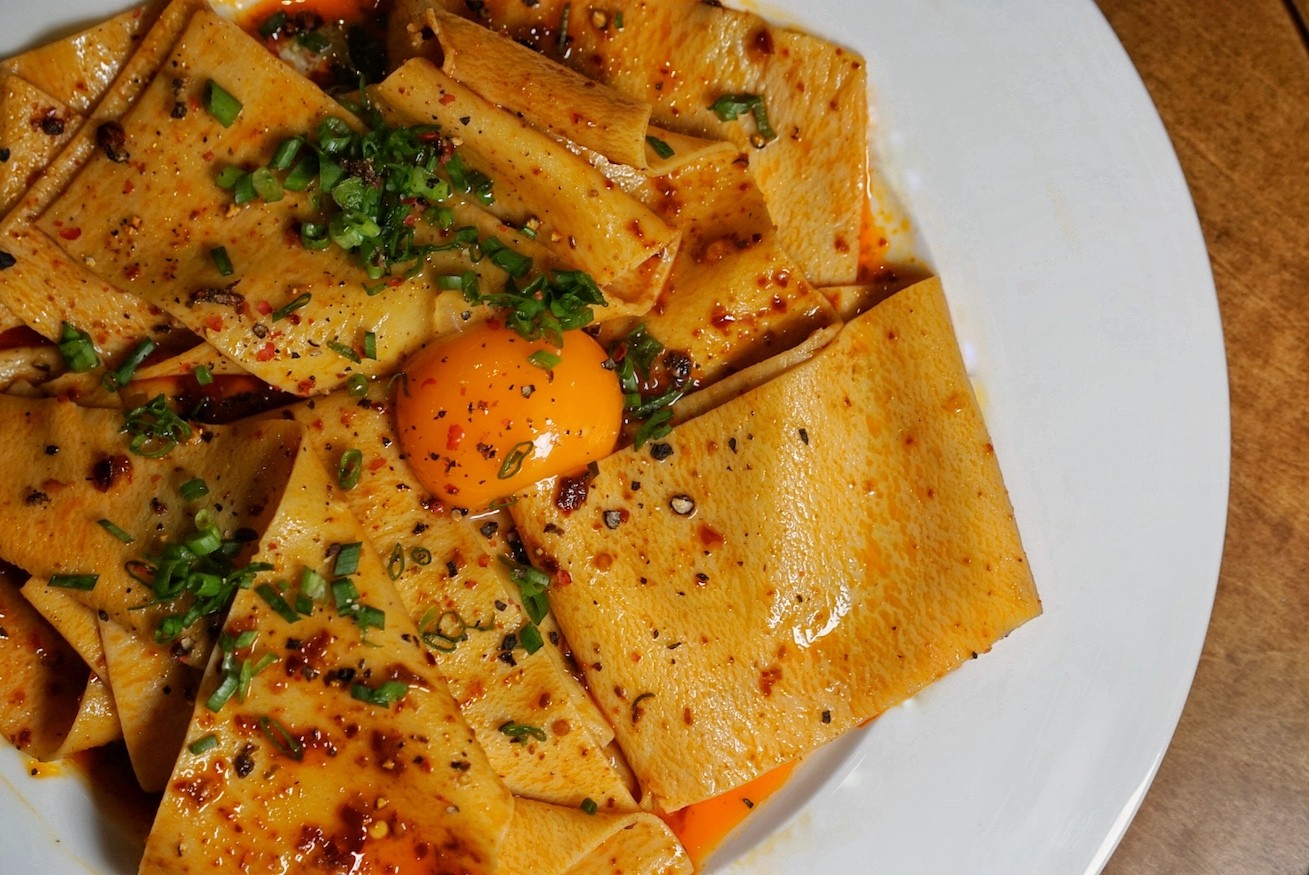 The team of imaginative creatives – at their core – understand true regional Chinese flavors, and have coupled that with a deep dive in Italian pasta making. Oh yeah, and there’s a pretty solid lineup of natural wines, tap and pre-batched cocktails (like an espresso martini on nitro draft, coming soon), tap beer and soft drinks that all support the pasta in a pocket-friendly way. Think house wine for RMB58 a glass. While Shanghai has no shortage of pasta – a key ingredient in almost every culture’s heritage – it’s often either an afterthought, lost in the jumble of steaks, pizzas and other Western fare; or it is the focus, but you’re paying a hefty price tag for that, probably somewhere along the Bund, served by white gloved waiters.

Yaya’s fills the gap, with an emphasis on ‘neighborhood’ feels associated with high value for money.

The food is unpretentious, approachable luxury, if you will: what you see is what you get. That’s not to say there isn’t hours of work that goes on behind the scenes, but don’t expect any microgreens. "None of us are Italian, and we aren’t trying to be. We serve some classic dishes but also experiment with Chinese flavors, working with the market next door to source some of our ferments, cured meats and local produce," explains Moo, slurping down a wriggly, sauce-coated pappardelle strand. 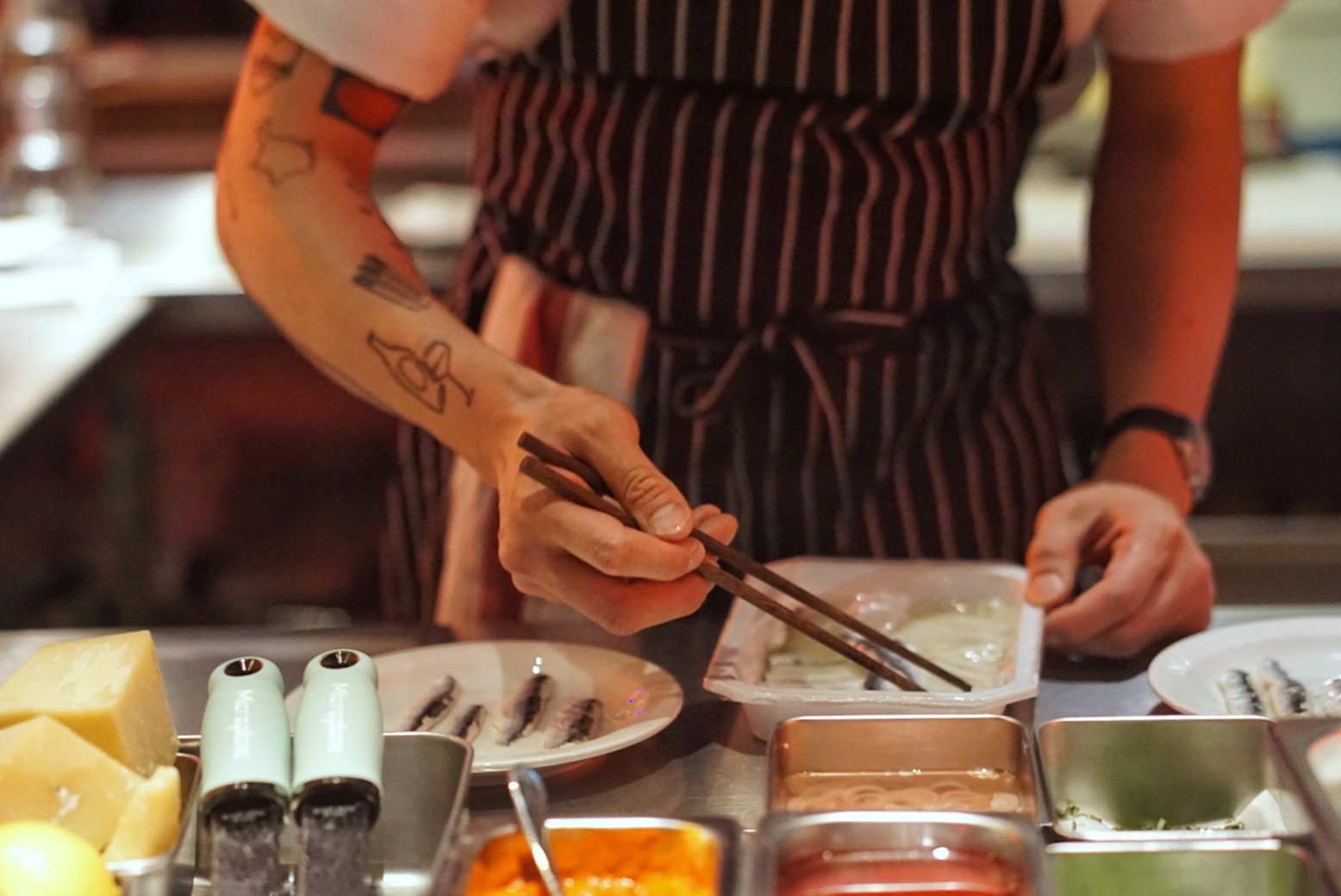 The concept – in a nutshell – is Chinese flavors with an Italian pasta backbone in a neighborhood pasta bar setting.

Sounds like something that would come out of the trendiest Brooklyn backstreet, but only in a city like Shanghai does the successful execution actually come to fruition, resulting in a bastardization of multiple cuisines, in the tastiest of ways. Antipasti spans the usual snacks, most with that signature unexpected twist, like Anchovies (RMB48) with Guizhou sour-fermented tomato and peppers, a zippy hit of lemon zest and pickled shallots alongside sprigs of fresh dill; or the Meatball Spiedini (RMB58) – made from pork shoulder, pork fat, cured pork (Chinese larou) and herbs – balancing on a thick shmear of herbaceous pesto. The humbly named Seasonal Caesar Salad (RMB48) is much more than the time-worn lettuce-on-a-plate standard, using locally-sourced frosted spinach, homemade focaccia croutons and a metric ton of grated parmesan, all slathered in an anchovy-forward dressing.

Onto the good stuff: the pastas… Pure tomato inception is the only way to describe the Rigatoni Al Pomodoro (RMB58), a labor of love that involves caramelizing the sh*t out of three different kinds of tomatoes – cherry, Chinese heirloom and an imported Italian canned variety used by most Michelin chefs.

The liquids and solids are first separated – a process that Chef Dan has mastered to the point of peeling over fifteen kilos of tomatoes per hour – reduced down into a thick stew with wine, and then filtered so the rounded richness is accented by tannic minerality.

The final product is some #basicbitch goodness that seems so simple, yet you can taste the work that goes into it, as it glazes tubular noodles that deserve a double ‘c’ in thickness.

Bonus: they are generous with their freely flowing, baked in house daily bread to ensure not a droplet of sauce is left behind. Udon-esque bouncy Bucatini Carbonara (RMB68) is made with imported dry pasta, rather than fresh, to maintain that expertly al dente springiness in every bite.

Each pasta strand is slick with a buttery burnt-onion and cured salted egg yolk sauce – Asia’s answer to umami-rich parmesan. Meltingly tender chunks of guanciale – or caramelized pork fat slivers – are sprinkled throughout, while every centimeter of noodle perimeter is covered in shreds of one-year aged Parmesano Reggiano and more shaved salted yolk.

A house-blend of fennel seeds, nuts, chili and panko bread crumbs, known as pangritta – or poor man’s parm – is liberally peppered on top; a texture and flavor bomb we are glad to find in jars on every table (and hopefully someday for purchase…by the kilo). 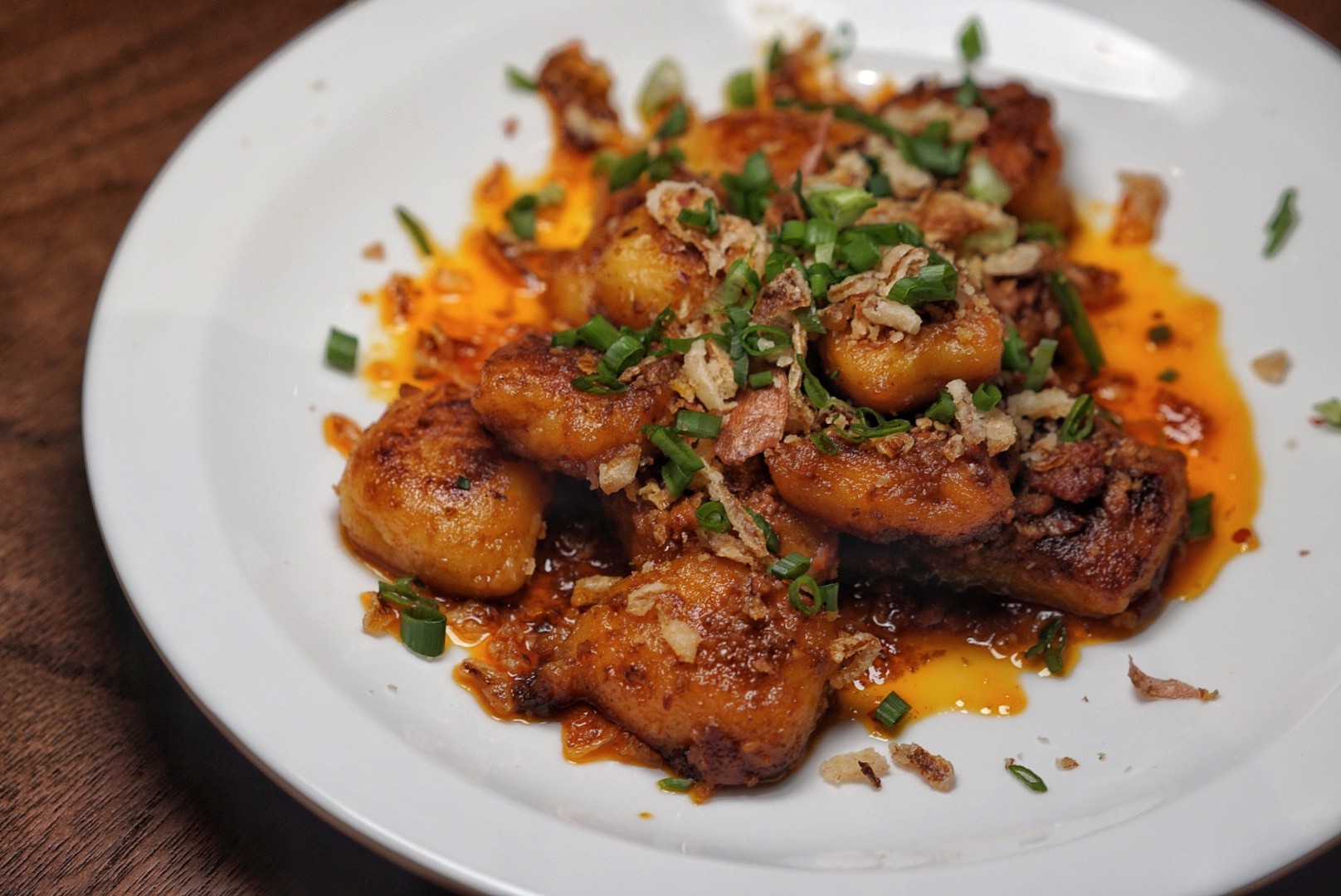 We will now take splashed chili oil on everything from here on out, so hand us a spoon or look away as we lick the plate clean. While the Chicken Parmesan (RMB68) is clearly not pasta, it is quite possibly our favorite bite of the meal – a thick slab of tender chicken thigh is battered and fried, crowned with enough mozzarella to qualify a proper smothering, a ladleful of the pomodoro’s tomato sauce, and a robust shmear of pesto.

If the Italian flag vomited on a plate, this cheesy masterpiece would be it. Smoky and charred with crispy edges yet a tender base, a whole Grilled Maitake (RMB68) rests on a whipped leek and ricotta cheese base, speckled with more of that poor man’s parm for added crunch.

The lunch menu features some of the dinner menu items, broken into value-driven sets going for RMB68, RMB78 and RMB88, with your choice of any permutation of snack, pasta, drink and dessert.

The aim is to become a regular hangout for those living or working around the Kerry Centre, a place where guests can pop in any time of the day, seven days a week, for a casual, inviting experience. 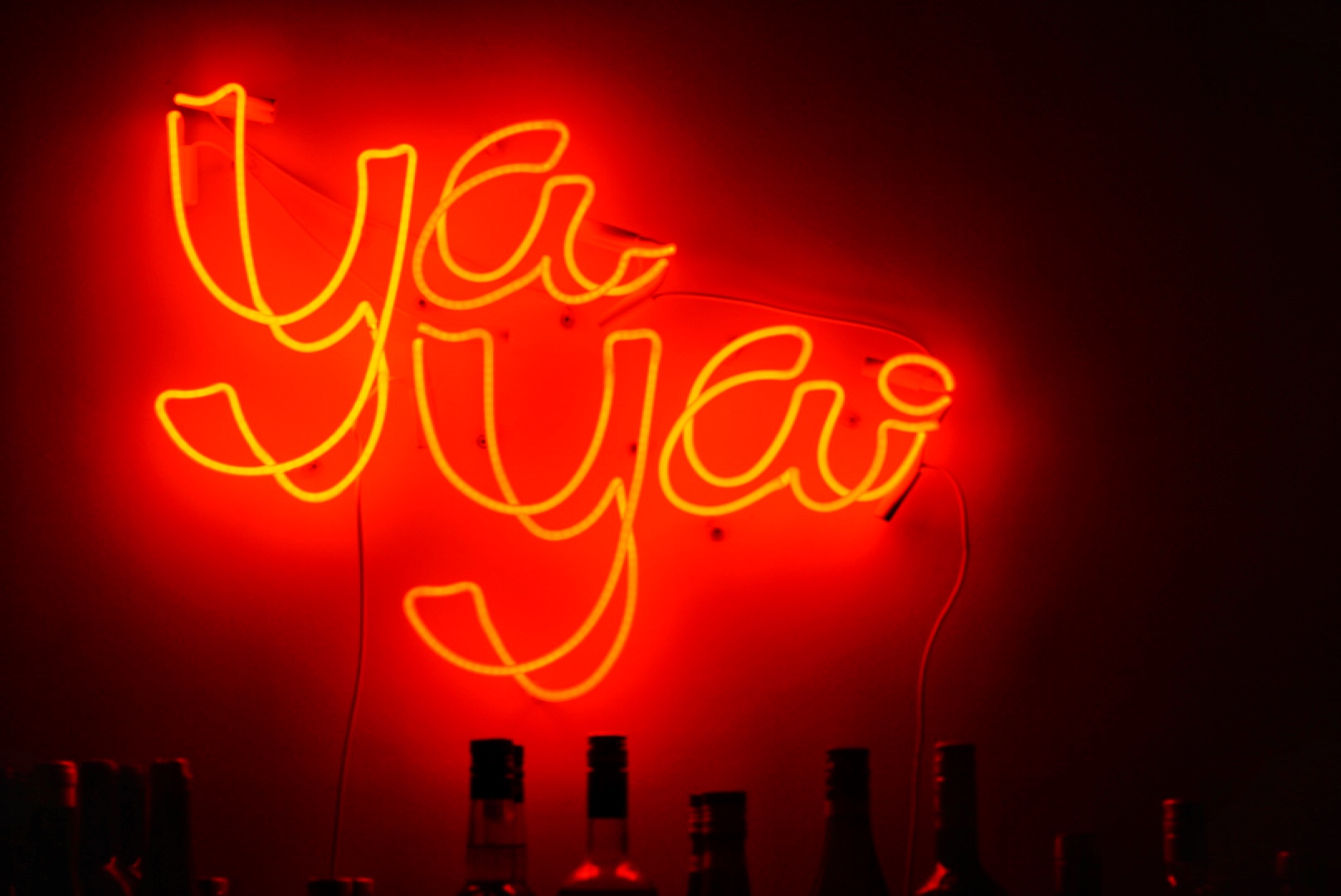 And good word travels fast; despite lockdowns, recent rain and the fact that they are still in soft opening, the place is bumping. 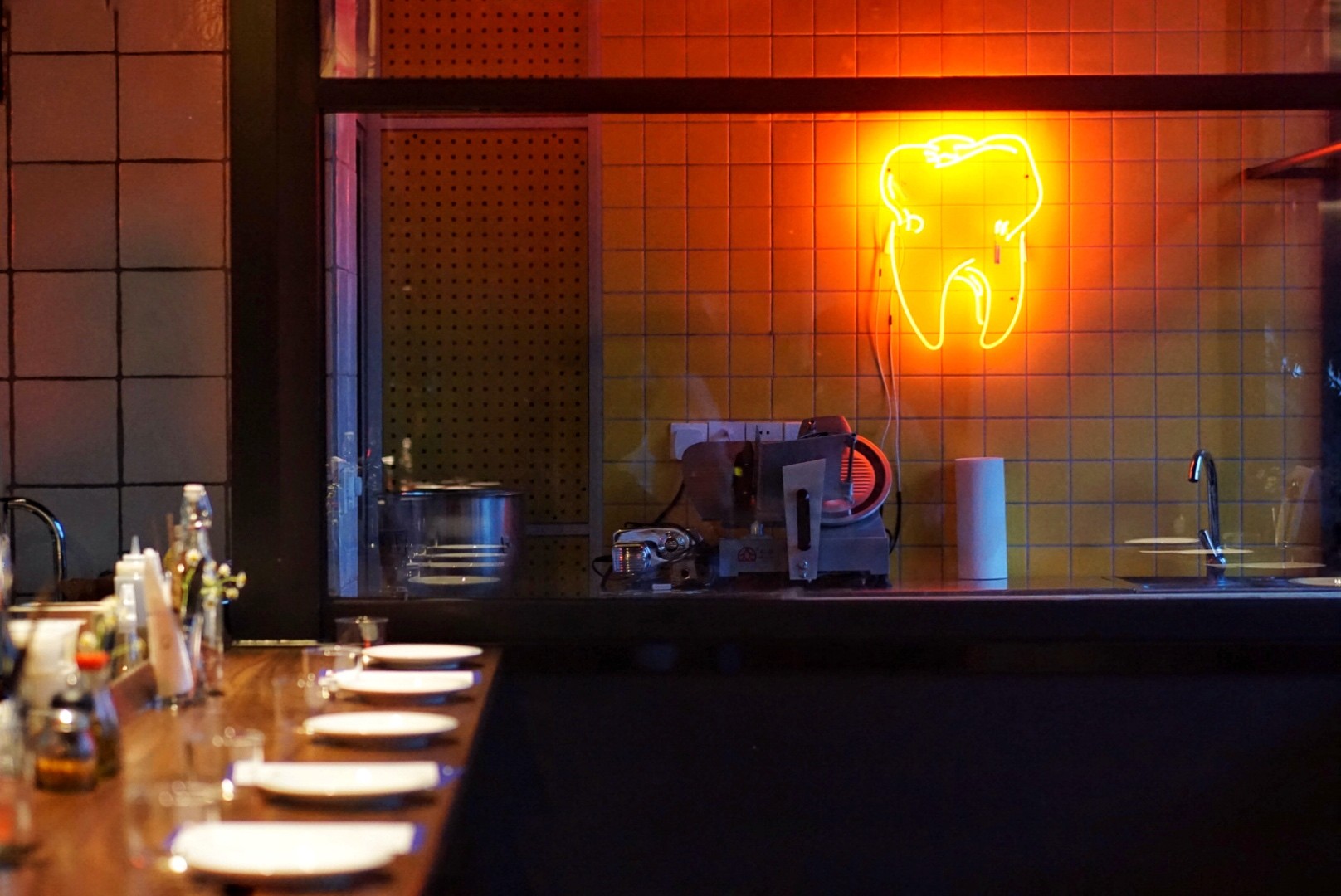 From a quick lunch with a 90s jams playlist as the backdrop into afternoon aperitivos rolling into relaxed dinners and late nights with guest DJs, it all touts a very laid-back and trendy Melbourne feel. 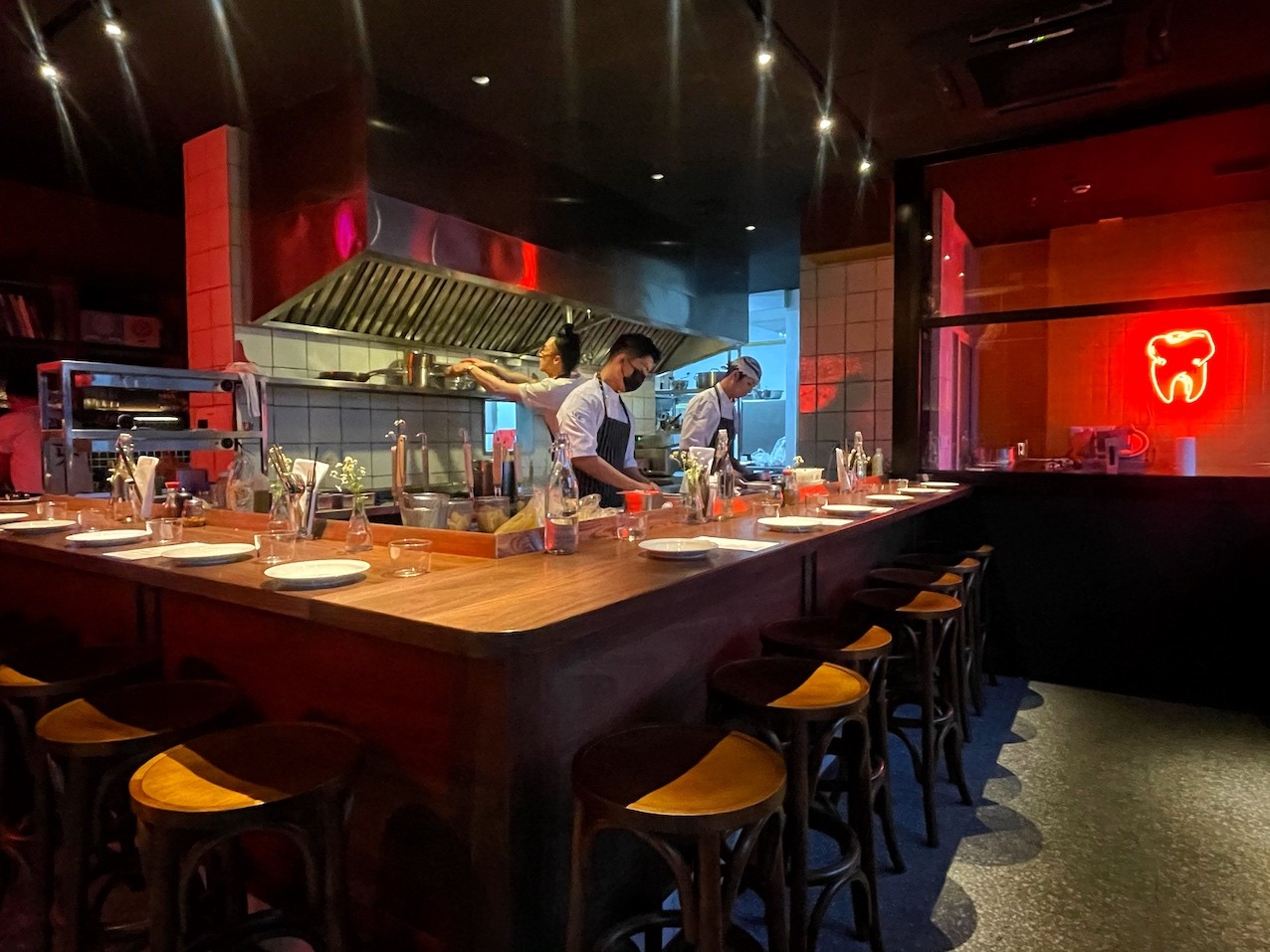 To encourage this drop-in mentality, reservations are only available for parties of five or more, since the space only seats roughly 40 diners.

And for those still dealing with the grid-system waves of quarantine, delivery kicks off next week.

See a listing for Yaya's.