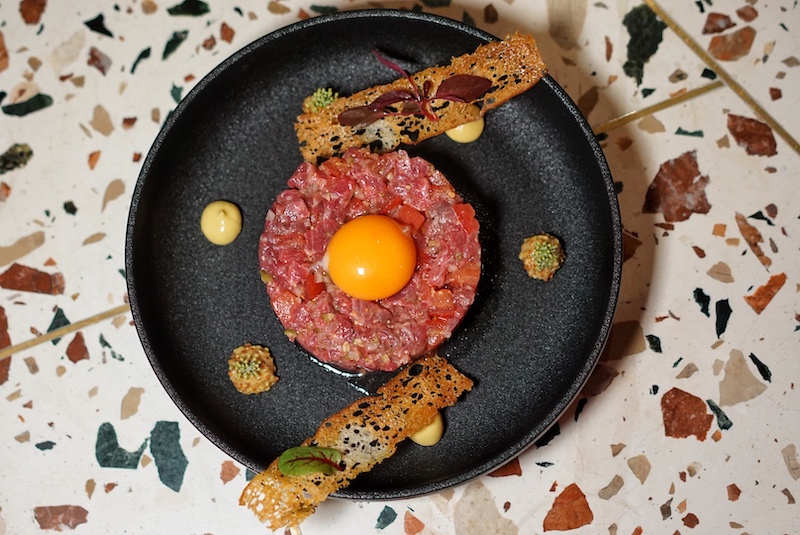 Although the origins are highly contested – was tartare invented by the Mongols, the French, the Germans or the Brazilians? – is irrelevant to enjoying this dish around Shanghai. The French word 'tartare' that is used today is broadly defined as a high quality protein – usually beef, but sometimes fish, horse meat (if you’re French, as who else is sourcing horse meat?) or even vegetables – that is finely chopped, seasoned and served raw. And that is the crux: the main ingredient has to be raw. If it’s ‘cooked’ in any form of acid (like citrus) it crosses into the world of ceviches, an entirely different dish we will save for another day.

Most commonly mixed with some variation of onions, capers, seasoning, mayonnaise, pickles, mustard and/or egg yolk, the classic tartare is savory and creamy with a hint of tang to cut through the fat. Yet, it’s no surprise that chefs in Shanghai have taken their tartares a step further, incorporating flavor profiles and ingredients from Japan and Vietnam to Italy and the Middle East, and getting creative with everything from smoked vegetables to borderline bleeding venison hearts and everything in between. So get your forks (or chopsticks) ready, it’s time to tartare your way around this city. 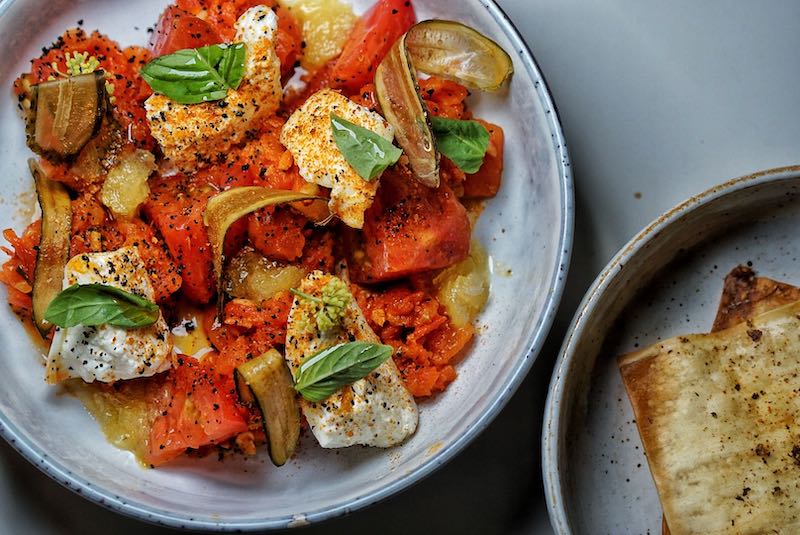 Bird’s Heirloom Tomato Tartare is a refreshing compilation of juicy tomatoes paired with their 13-spice tomato jam and semi-dried gherkins for a sour pop, plus dehydrated black olive flecks and verjus snow, made from grape juice extract. Topped with the creamiest burrata, licorice-like fennel flowers and wonton crackers, this vegetarian-friendly tartare can also be made vegan by subbing out the burrata for homemade firm tofu.

SOiF is everyone’s new favorite wine bar, and although the owners say food isn’t the focus, it really deserves to be. SOiF’s Beef Tartare, mixed with Korean gochujang, homemade kimchi, pickled daikon slivers, egg yolk and served with crispy toast is a standout on both their menu and this list of Shanghai’s top tartares. The Korean twist is an interesting play on the classic French version we expected from co-owner Francois – we now find ourselves craving kimchi at any mention of a tartare. The lower price point is partially due to the smaller portion when compared with others around Shanghai, but also because of the solid value you can always expect to find at SOiF. 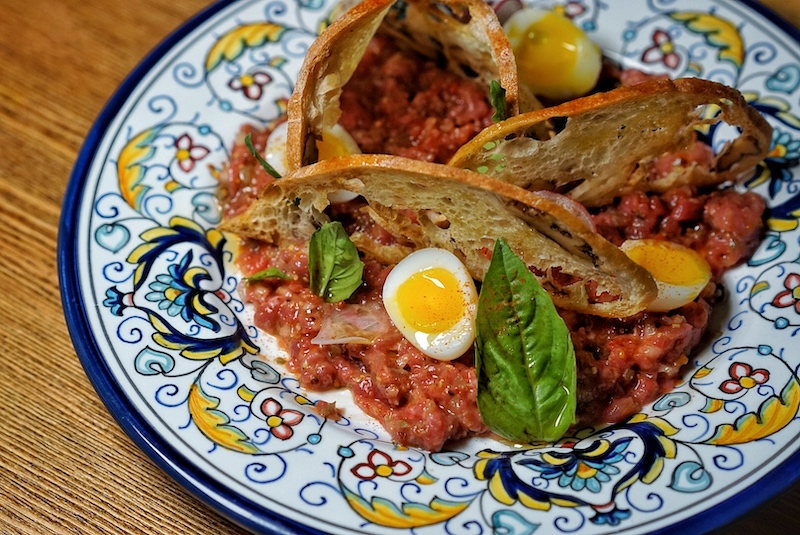 Alimentari Grill is open for business, with a menu that focuses more on the titular grill side of things as opposed to pizzas and sandwiches like sister restaurant locations. The Beef Tartare is made from a leaner cut of tenderloin, mixed with mustard, capers, soft boiled quail eggs and smoked paprika. Despite the additional seasoning, this dish fell a bit flat for us compared to others on the menu – any of the grilled meat options are tastier alternatives, which we should have guessed from the restaurant name. 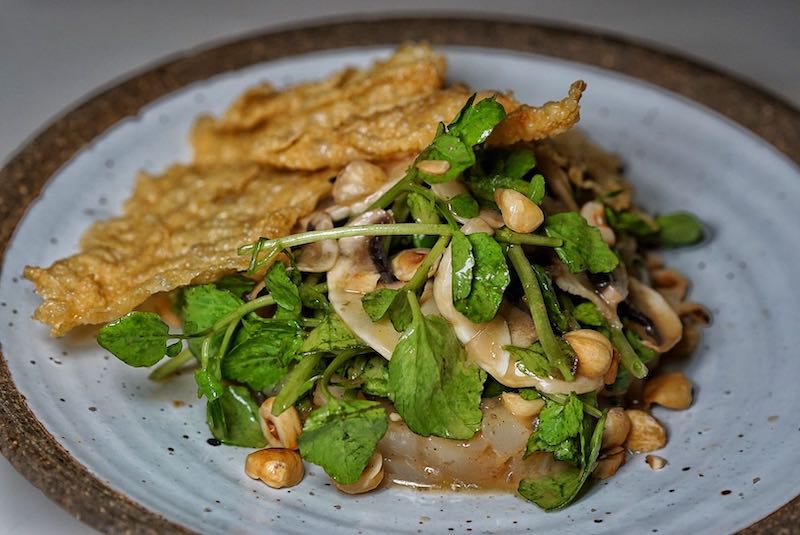 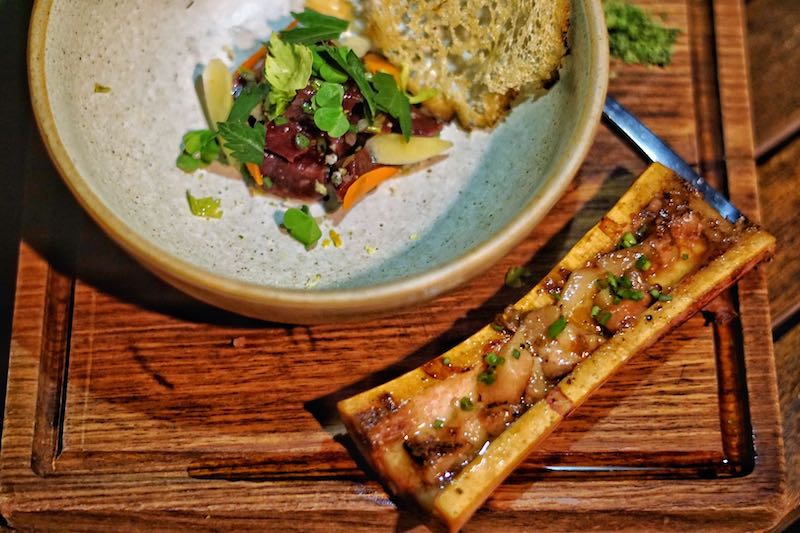 For the epitome of a gamey tartare, look no further than Canadian hunter-gatherer inspired restaurant, The Nest. The Venison Heart, As It Is is chopped into big chunks of dark purple cubes, served in a simple stone bowl, conjuring images of Queen Grimhilde ordering the huntsman to bring back Snow White’s still beating heart. Equally primal, the tartare is served with a side of sinfully delectable grilled marrow, still in the bone. Mixing the two together with fermented carrots, celery leaf and smoked oil, this tartare is truly the ‘fairest of them all.’ 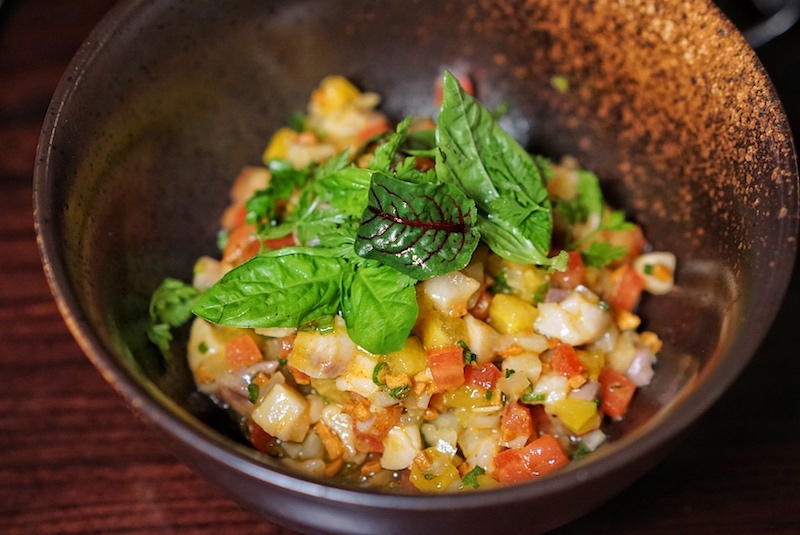 Everything comes in pairs with Bar à Vin’s Yellowtail Tartare. Double yellow, in the form of yellowtail and refreshing yellow watermelon, coupled with two kinds of juicy tomatoes, and double the greens – basil and beetroot leaves. It all results in a doubly delicious dish, a necessary alternative to the richer French dishes commonly served here. 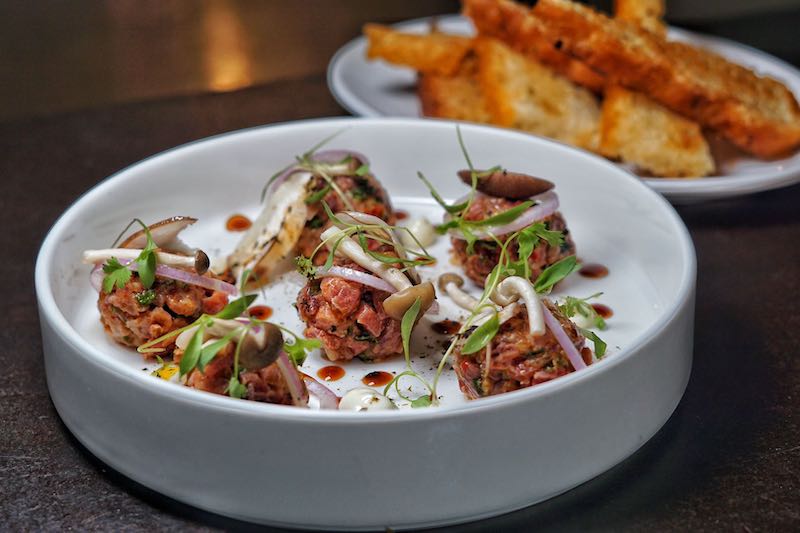 Commune Social’s Beef Tar-Tar is all about the light and spicy Vietnamese flavors, making it a favorite that has remained on the menu for more than five  years. Topped with a Vietnamese dressing, sour pickled mushrooms, dashi, crunchy shallots and Japanese spices, the six individualized portions sit on the crispiest buttered toast wedges. The micro cilantro garnish brings a necessary brightness that balances the rich dots of egg yolk and smoked fat dressing artfully presented around the plate. 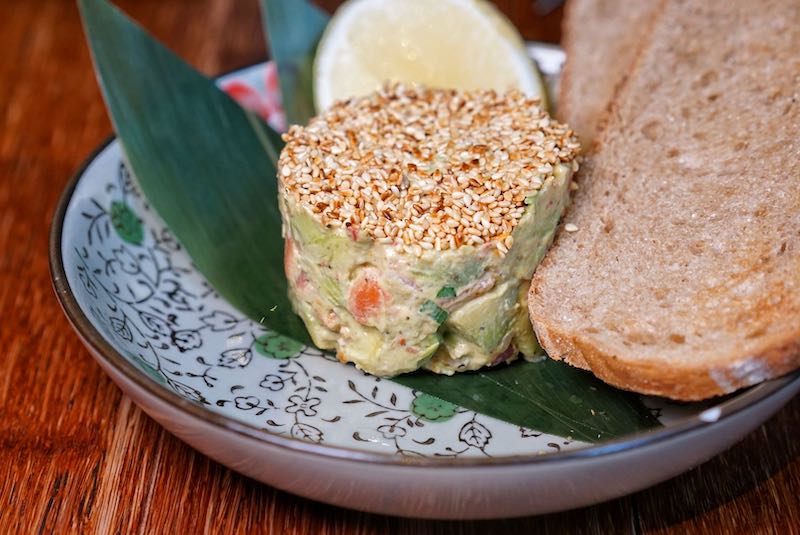 The Cut’s Pacific Salmon Tartare is a welcomed lunch option that won’t destroy your afternoon productivity. Salmon ribbons are mixed with a substantial portion of avocado purée and sprinkled with sweet chili, cilantro and crunchy sesame seeds, providing an excellent balance of lean protein and healthy fats to keep your body happily nourished. 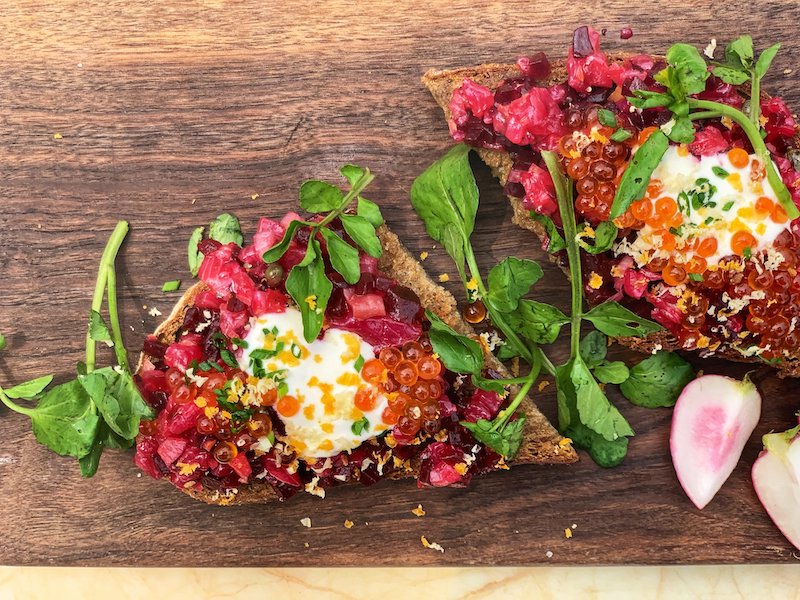 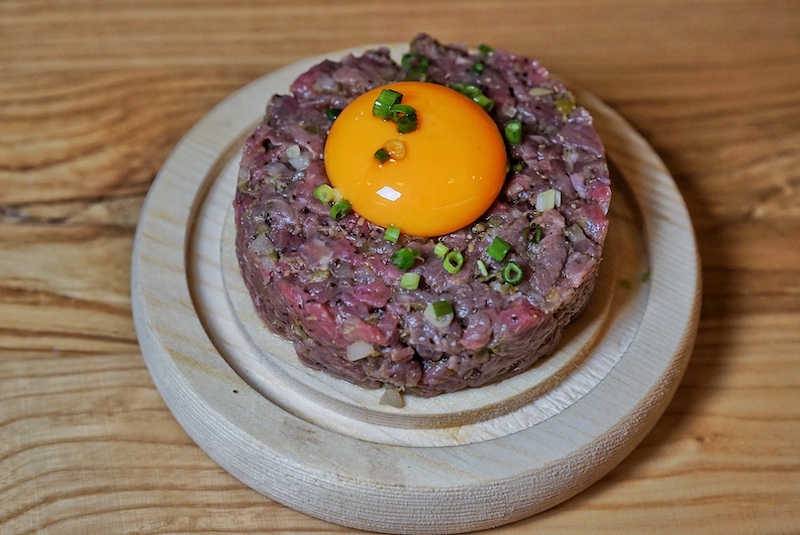 The Beef Tartart arrives tableside at Food Theory, covered in a smoke-filled glass cloche, we guess for gimmicky presentation purposes, since it adds nothing to the blander flavor of the dish. The grey-tinged meat is topped with an egg yolk and a sprinkling of chopped scallions, but crying out — alone in the dark — for mustard, mayo or just any kind of sauce or seasoning out there. 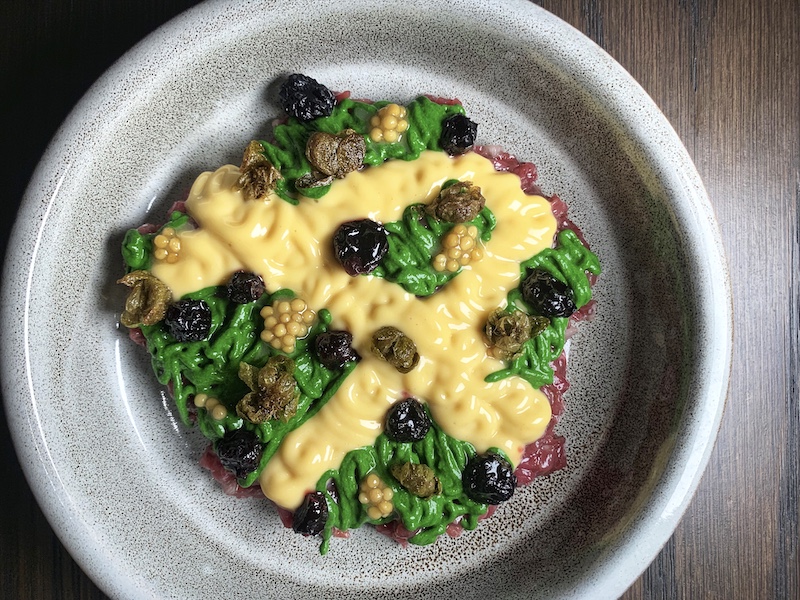 Charcohol’s New Zealand Venison Tartare has an aggressive portion of scallion puree and juniper mayo sauces, answering our question of ‘Can a tartare be too creamy?’ Unfortunately, the answer is yes. The bites of tender meat with a hit of mustard seed is where it’s at, so scrape off that extra mush for a more refined morsel.

Italo’s Wagyu Tartare is 120 grams of Uruguay-sourced wagyu beef marinated in Laphroig 12 year, before being mixed with finely chopped tomatoes and organic egg yolk. The hit of whisky is anything but subtle, but for those that like their beef with a side of scotch, like us, this tartare is for you. 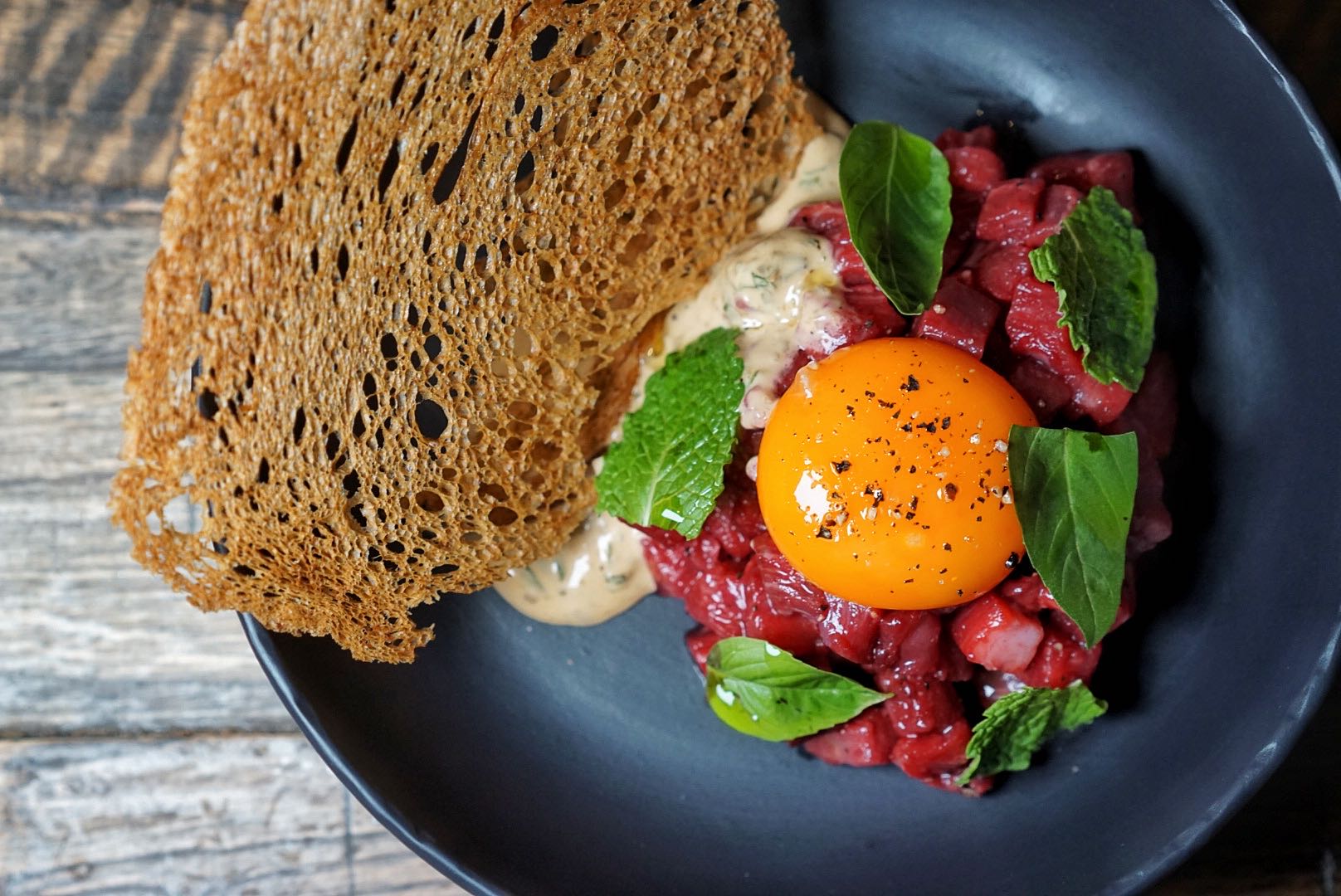 Polux's Beef Tartare Tradition distinguishes itself in that the beef is cut into much larger cubes than the more commonly seen finely minced versions. We found this difference to be quite appealing, and all the more easier to sop up the elevated version of herbaceous and tangy thousand island dressing on which the meat sits. The delicately light rye crisp that adorns the side of the bowl shatters under the weight of the meat, so best to just crumble it in, mix it all up with the yolk, and go for more of those French fried cubes served on the side that are essentially the perfect marriage between a French fry and a tator tot. 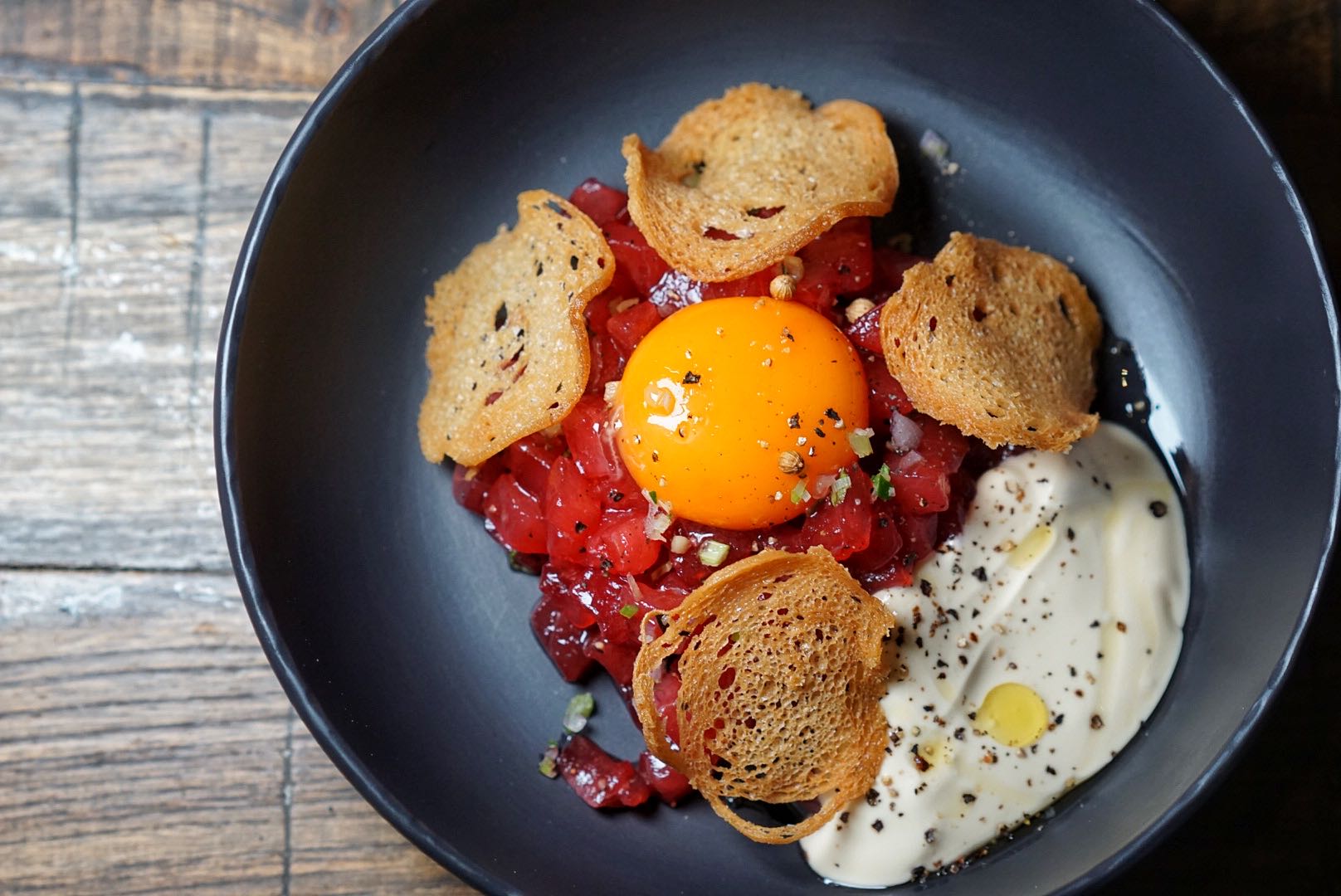 For those limiting their red meat intake, the Tuna Tartare Tradition is a similar option, except with glistening ruby-colored cubes of delicate tuna and garlic chips. 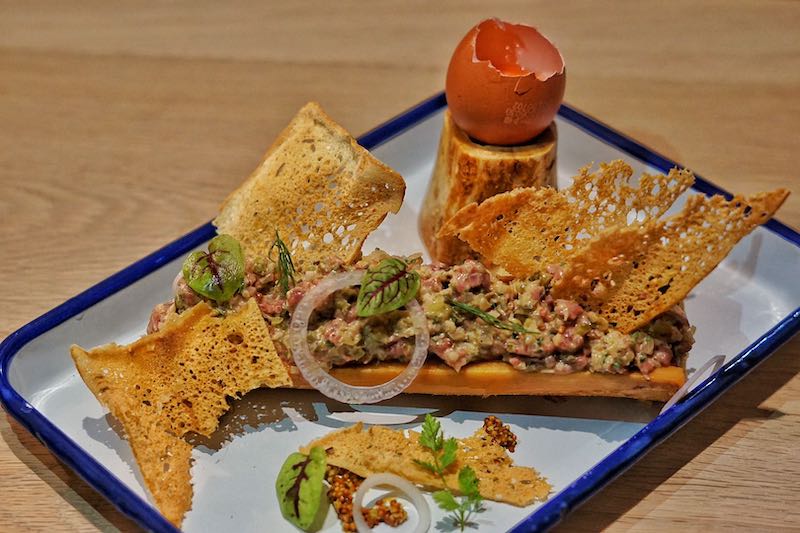 The Australian Wagyu Beef Tartar at Together is a standout in flavor, presentation and size. The high quality beef is mixed with pickled gherkins, kimchi and crunchy onions. Pour the creamy raw egg yolk across the top, watching the beads dribble down the side of the bone, and use the garlic bread crisps as a vessel for shoveling as much in your mouth as possible. Since it’s served inside a Fred Flinstone-sized bone, the portion is big enough for sharing; if you’re only two people, this dish could really serve as a main. 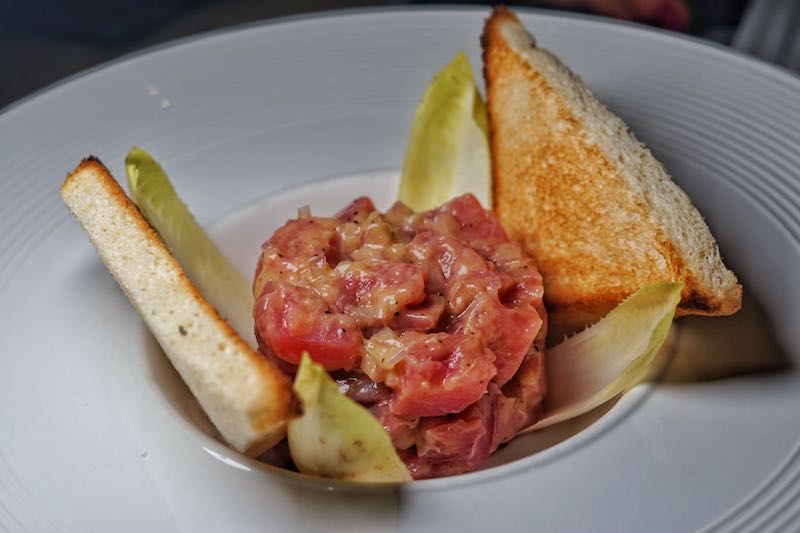 The hand-cut Tartare di Tonno at Goodfellas is in the appetizer section, but the large pieces of tuna served with both toasted bread and crisp radicchio make it a hefty portion, perfect for alternating between various vessels for consumption. Seasoned with a citrus juice blend, chopped red onion and aged balsamic vinegar, this simple dish is equally light and fresh. 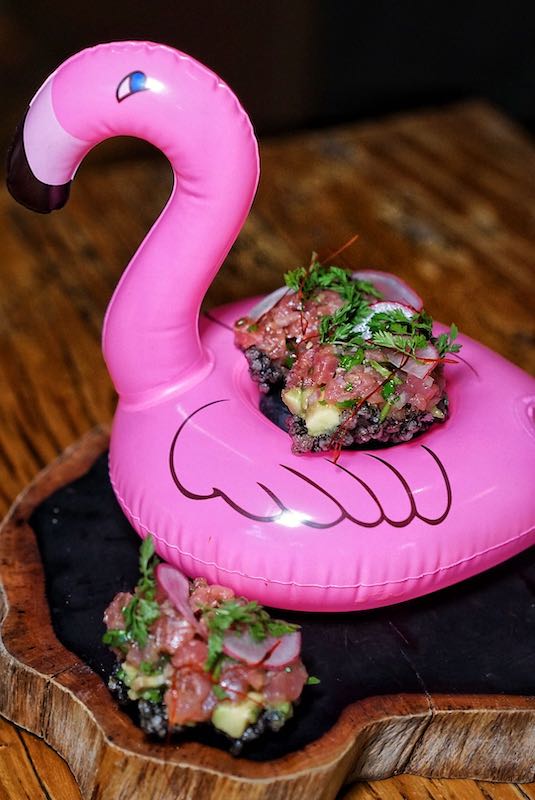 Cuivre flaunts two signature tartares. First, the Paleo Tuna Tartare is whimsical, right down to the hot pink flamingo floaty it's served on. Red tuna, ginger, coriander, honey, avocado and loads of fresh herbs sit on top of house-made tapioca chips. Chef Michael first cooks the tapioca with squid ink before frying them, resulting in a light, airy crunch that serves as a counterpoint to the tuna’s succulence. The whacky presentation is warranted since this refreshing tartare reminds us that it’s time to book our next beach vacation. 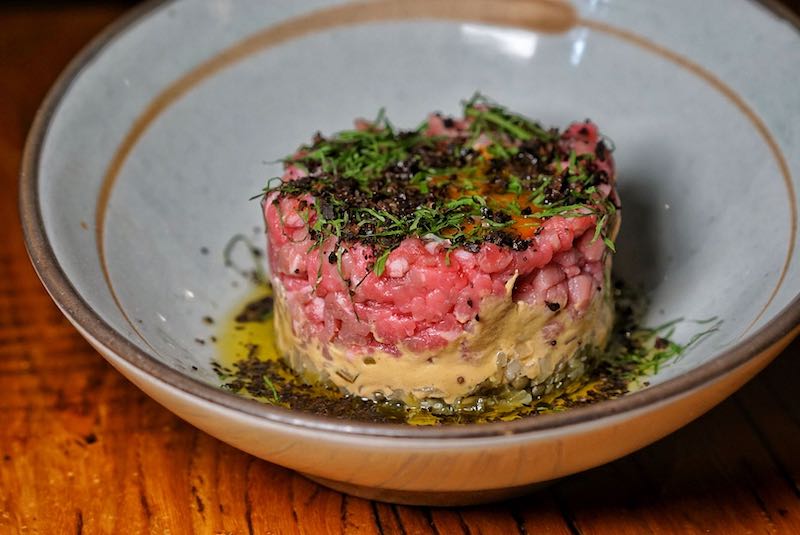 In every way that the Paleo Tuna Tartare is imaginative, the Tartare de Boeuf Au Couteau is traditional. This layered version of the standard beef tartare comes with all condiments separated into colorful stripes. A large portion of hand cut Australian Angus beef sits atop a thick layer of spicier-than-expected (in a good way) Dijon. Mix the baby capers, gherkins and truffle together, along with a creamy 61-degree runny egg for an expertly executed version of a class French tartare. 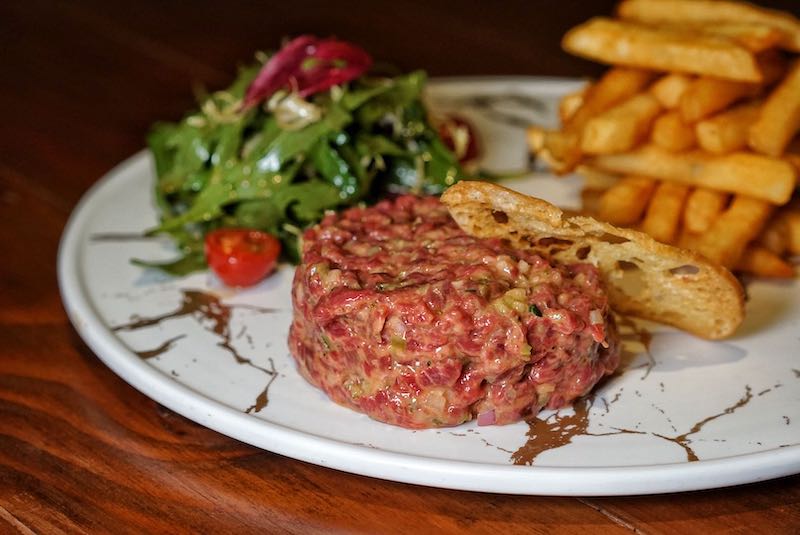 If you want the most OG, classic tartare in Shanghai, look no further than Epices and Foie Gras’ Beef Tartar. Using lean grass-fed beef tenderloin, the true flavor of the meat comes through without being overpowered by extra fat. Blended with homemade mayonnaise, mustard and capers, this tartare is all about honoring that perfectly luscious beef, further proving that if it ain’t broke, don’t fix it. 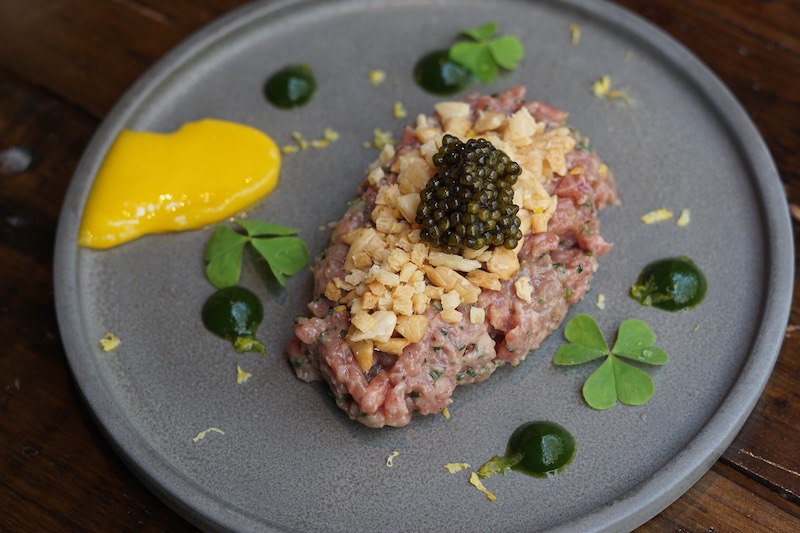 Beef tartare seems to be on every menu in the city at the moment, yet Oxalis still finds a way to make theirs memorable. The Aussie Angus Beef is made with hand cut M3 Australian Beef. Instead of using mayonnaise, chef Jonas Noël sets an oxtail broth into a jelly, and mixes it with Laphroig 10 year and lemon oil. The whole dish is topped with crunchy Indian almonds and beads of salty Yunnan caviar for a distinct texture contrast. Cleverly, the dish is sprinkled with heart-shaped leafy Oxalis. Pure lux takes form in the Jumbo Crab Meat Tartare from Cafe Gray Deluxe. Sitting in a light dashi jelly and topped with caviar, the uber fresh crab meat is served with crispy almond-coated nori chips. Although the portion is much smaller than many of its beef counterparts, the splurge is well worth it. 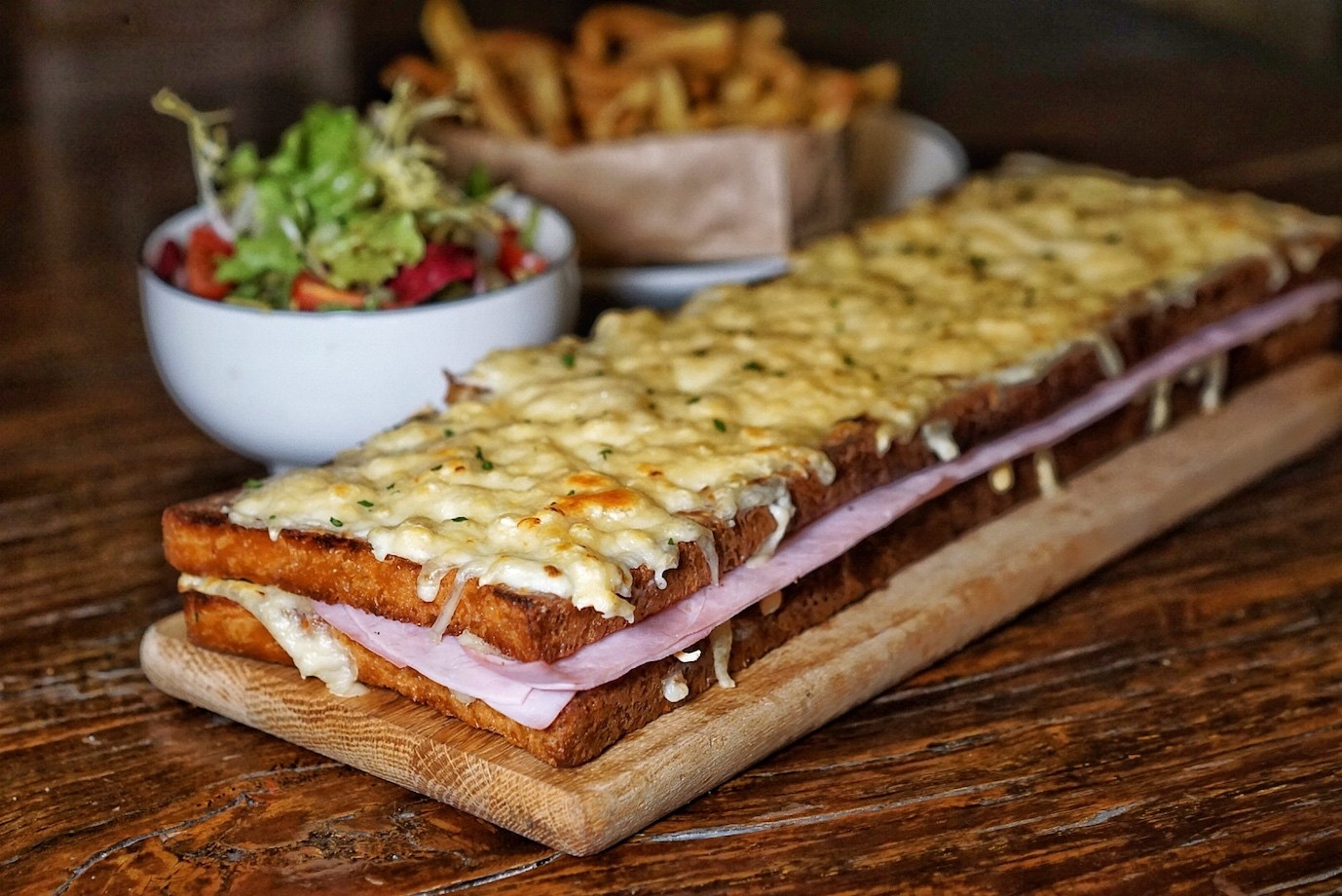 Here's what Shanghai is dishing out on the croque scene. 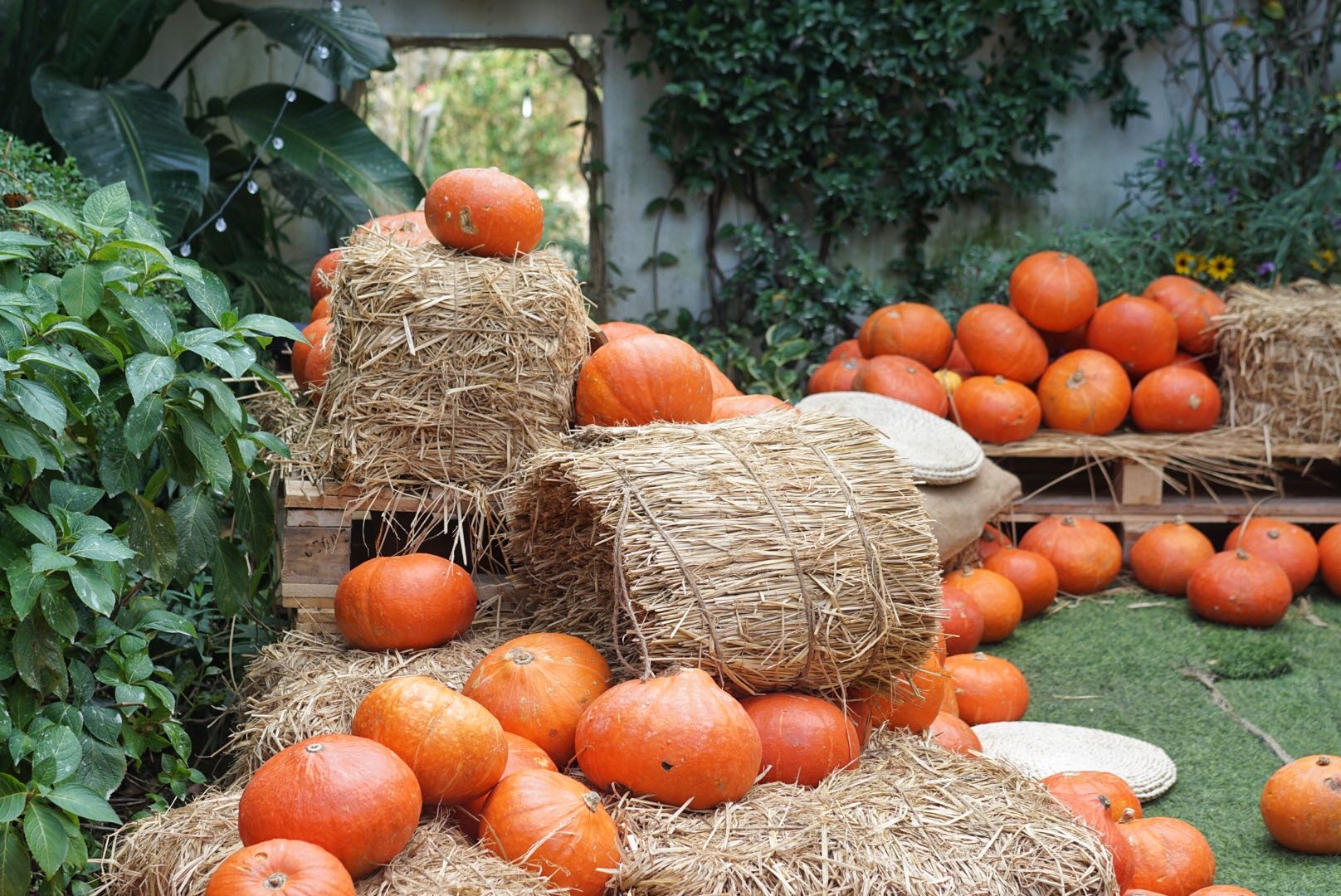 Enjoy all things Argentina at this laidback neighborhood hangout.