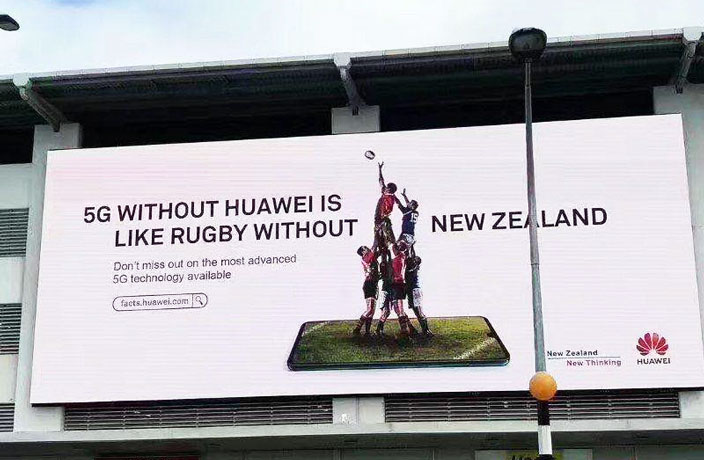 For those living in the PRC, that’s an easy question due to the high level of exposure of Chinese products as well as the neccesary function these companies play in our daily lives. But, for folks outside of China, the overall awareness of Chinese brands is relatively low (for now).

In an interview with CNBC earlier in February, Doreen Wang, global head of BrandZ at Kantar Millward Brown, went so far as to say she believes “that the majority of the population in the US probably couldn’t even name one Chinese brand.” This statement came after their 2018 report on Chinese global brands put Lenovo, Huawei and Alibaba as the most-known brands by people outside China. The report utilized Google search data along with 395,000 online surveys to identify Chinese brands with the most awareness beyond the Middle Kingdom’s  borders. 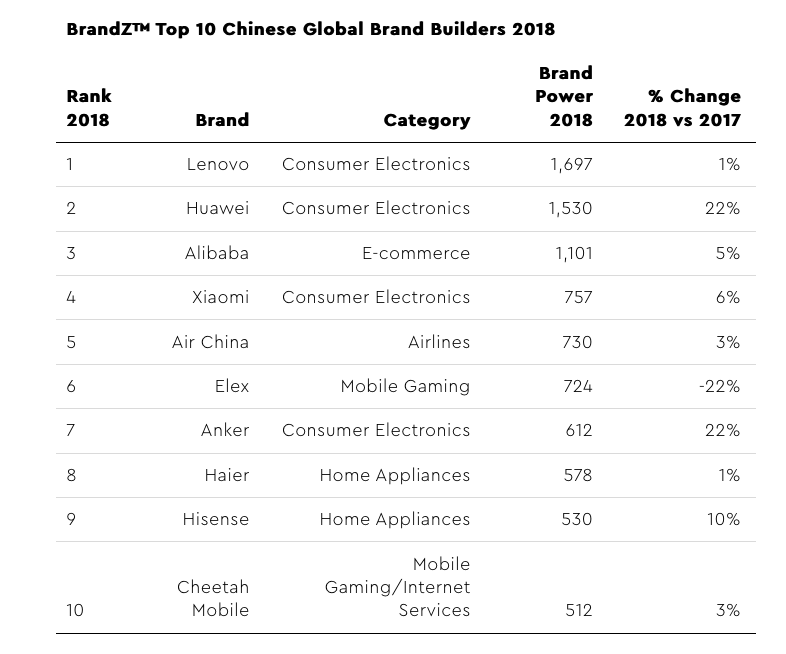 China’s top global brand builders, according to a report by Kantar Millward Brown. Chart via WWP

Following shortly behind Lenovo is Huawei, another consumer electronics giant who has grown at an astounding pace in recent years. While the company has been bogged down by political pushback from multiple countries’ governments over serious privacy concerns and spying allegations, Huawei has forged ahead, forming partnerships around the globe and building their case as a top global player.

BrandZ’s 2018 study highlighted that innovation is the biggest factor played in Chinese brand growth, and also revealed that the UK shows the most positive attitude toward Chinese brands (perception of Chinese brands in other countries varies greatly). Wang points out that she sees a shift in mentality from older generations of consumers to younger generations, who view brands like Alibaba, JD.com and Lenovo as cool and affordable for products and services.

One notable brand that wasn’t mentioned in the report, a short-form video app called TikTok (known as Douyin in China), has experienced a rapid rise in popularity overseas since acquiring Musical.ly in November 2017. Owned by ByteDance, a Beijing-based company, TikTok is the world’s most valuable startup, valued at USD75 billion, according to CGTN. In a CGTN article published on January 21, Henry Zheng writes, “For now, the app has done the seemingly impossible for a Chinese brand: achieving cultural relevance around the world.”

TikTok’s Twitter following is growing quickly while on Weibo they boast over 16 million fans. Screengrab via Twitter

A recent report by Brand Finance, an independent brand valuation and strategy consultancy, also makes a note of China’s budding global brands, with 11 of the top 25 most valuable global brands based in China. The report, released on January 22 at the World Economic Forum in Davos, Switzerland, focuses on global brand growth among all industries and analyzes brand value tracking, competitor benchmarking, management KPIs among other related figures. Brand Finance points out that Chinese brand presence is growing at a fast rate, with companies across industries such as technology, finance, real estate and insurance rising in the charts. WeChat, China’s superior messaging slash payment slash everything else you need app, lifted its brand value 126 percent since last year, and currently ranks No. 20 among the world’s most valuable brands (jumping 26 spots from last year). Meanwhile, four Chinese banking giants ICBC (No. 8), China Construction Bank (No. 10), Agricultural Bank of China (No. 16) and Bank of China (No. 19)  are all ranked higher than the top US bank, Wells Fargo, which now sits at No. 30 in brand value after falling 16 spots since the previous year. Brand Finance attributes the brand success of Chinese banks to innovations in digital banking and AI integration.

While Chinese brands appear to be growing fast, Brand Finance’s top three most valuable brands, Amazon (No. 1), Apple (No. 2) and Google (No. 3), are still in a league of their own.

But for China, the growing global presence of Chinese companies is a positive sign and, quite frankly, an integral part of the country’s future growth.