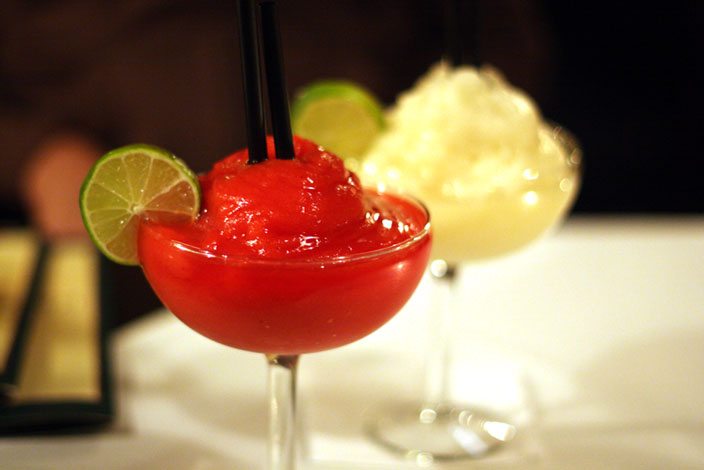 Cinco de Mayo falls on Saturday this year, which means that Shanghai fiestas will be raging hard in celebration of the 1862 Mexican victory over Napolean III's army. We've put together a handy round up for you, so no excuses for missing out. Read on to find out where to eat all the tacos, drink all the tequila and dance it all off. Bordertown is kicking off the fiesta early with free margaritas from noon until their frozen machines are empty. They also have two hours of unlimited build-your-own tacos featuring both Tex-Mex classic meat fillings and healthy, vegan choices from Happy Buddha. The party doesn't stop there. Be sure to take advantage of deals on Frito Pies, tequila shots, Corona's and all day happy hour. The folks at Cin Cin Cantina & Bar are already well-known for serving up Mexican snacks at a great value and their Cinco de Mayo deals make a trip up to north Jing'an worth it.

Six shots of Jose Cuervo for RMB50, Margaritas and Palomas for RMB30, Corona or Asaihi draft for RMB18, quesadillas for RMB25 and tacos or chips & guacamole for RMB 15. 10.30am. Cin Cin, see event listing. 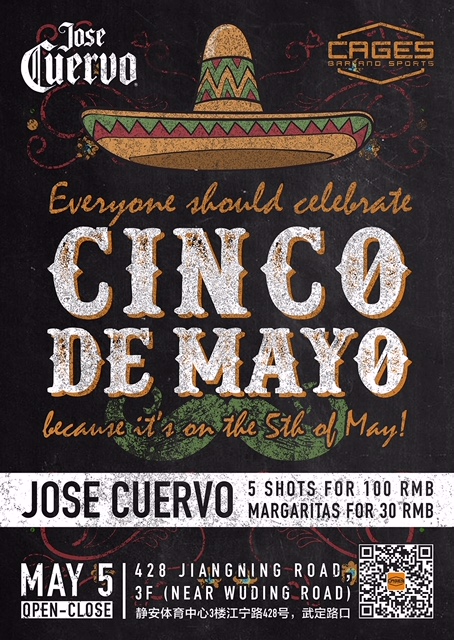 Teaming up with Jose Cuervo, CAGES is bringing you deals that will kick start your Cinco de Mayo, or Cinco de Drinko, as some prefer to call it. Deals include frozen Margaritas at RMB30 a pop, and five shots for RMB100. Doors are open from 9am to late evening, so you'll have plenty of time to get the fiesta going! Go relive the glory days of Cinco de Mayo parties of Yongkang Lu's past with taco deals (get one free with the purchase or a Paloma or Altos Margarita) from 5pm until they sell out as well as some killer drink specials including RMB25 Coronas and Margaritas all day and night. 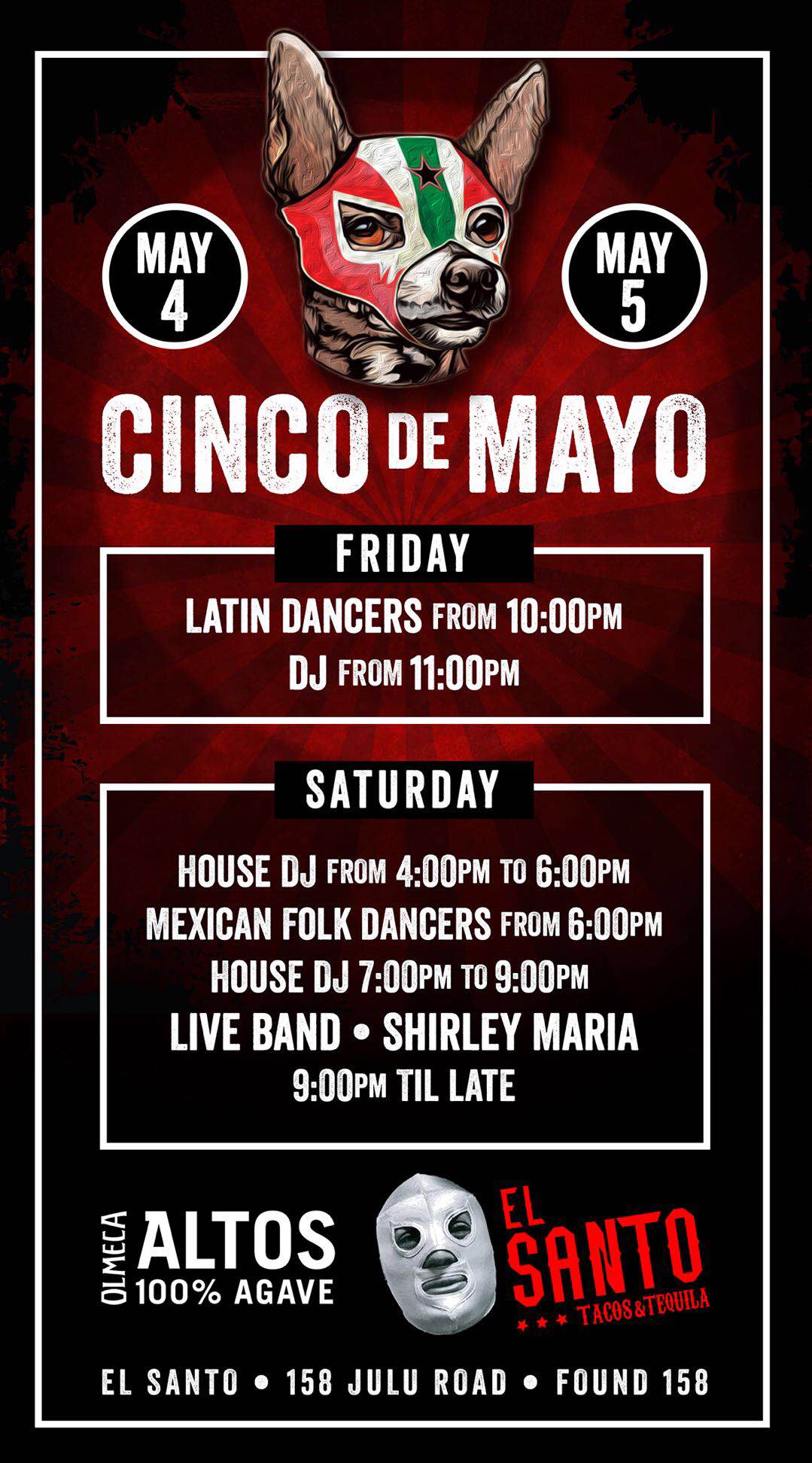 In commemoration of the Mexican army's unlikely victory over the French forces of Napoleon III on May 5, 1862, at the Battle of Puebla, El Santo is celebrating with taco deals (get one free with the purchase or a Paloma or Altos Margarita) on Saturday , buckets of tequila and loads of Mexican themed entertainment including a live Mariachi band and Latin dancers on Friday.

Complimentary taco with purchase of paloma or Altos margarita for RMB50. 5pm until sold out. El Santo, see event listing. If you haven't checked out the FUNKA group's brand new Latin American concept, Cinco de Mayo is a perfect opportunity. At FUNKA del Sur they will have taco and tequila deals from 4pm-8pm. Buy one Altos Tequila cocktail, get one free taco. Match made in heaven, we say. This Saturday Hollywood is ready to celebrate Cinco de Mayo with all of their amigos! Expect themed decorations and goodies to give their infamous afterhours party a south of the border vibe. Special deals on tequila shots, of course. Lineup includes their resident DJ Jobo as well as special guest, DJ Richard.

Entry is free before 1am (for men) or 3am (for women) otherwise RMB100 cover. Hollywood, see event listing. Why have a one day party, when you can drag it on for three? Logan and his team will be pouring tequila shots and mixing margaritas all weekend long plus quesadillas are on discount too. Shirley Maria (and her mariachis) are back at Mayita's rooftop terrace for another awesome Cinco de Mayo Fiesta. Mexican food lovers can feast on tacos, roast chicken, ribs and churros then wash it down whith excellent prices on margaritas, beers and micheladas. 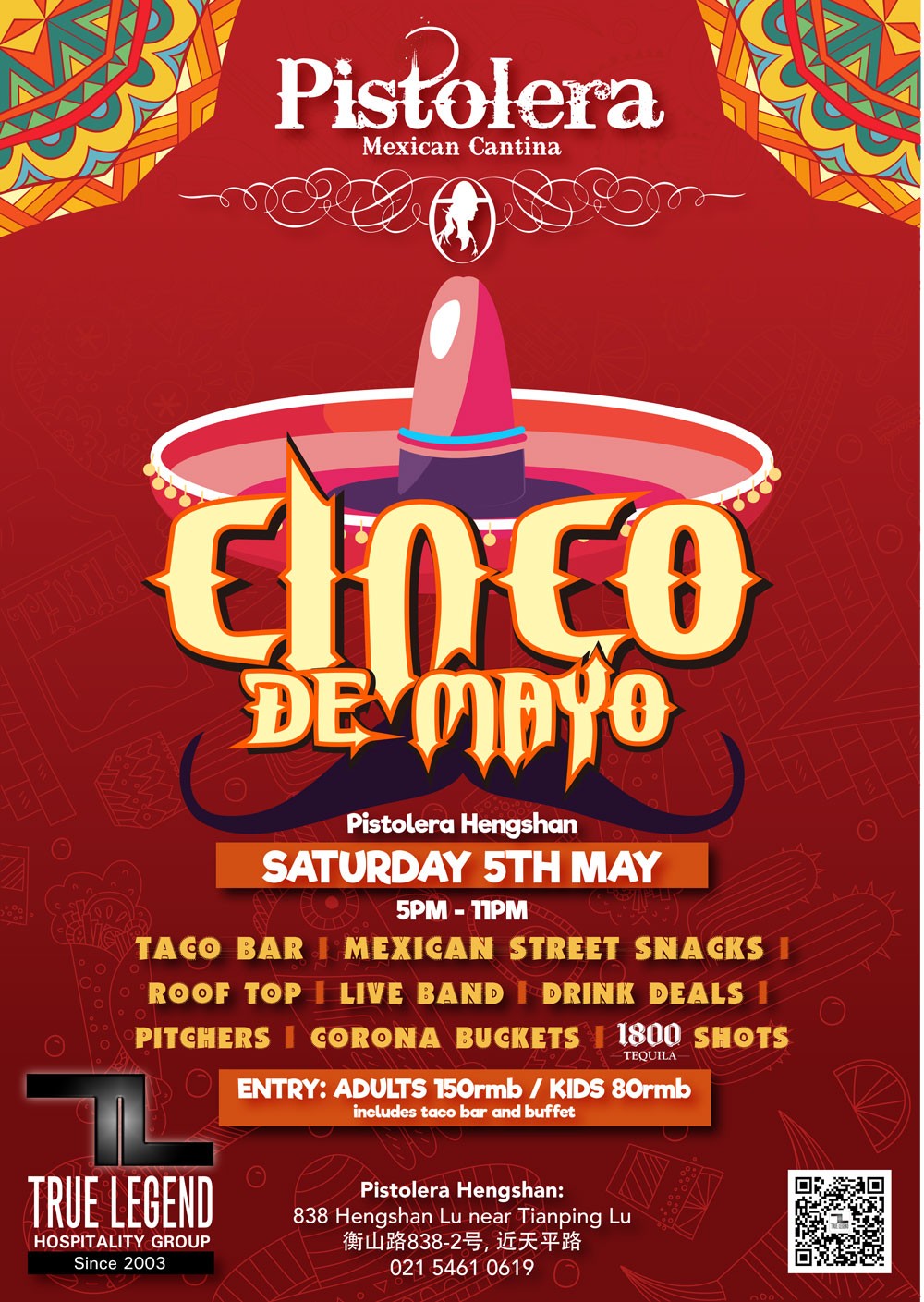 A live band playing latin tunes will keep you moving from 5pm-11pm at Pistolera on Hengshan Lu. Fans of DIY taco and salsa bars will happily indulge in the spread they have planned. Drink specials include margarita pitchers, buckets of Corona and tequila shots plus True Legend beer. 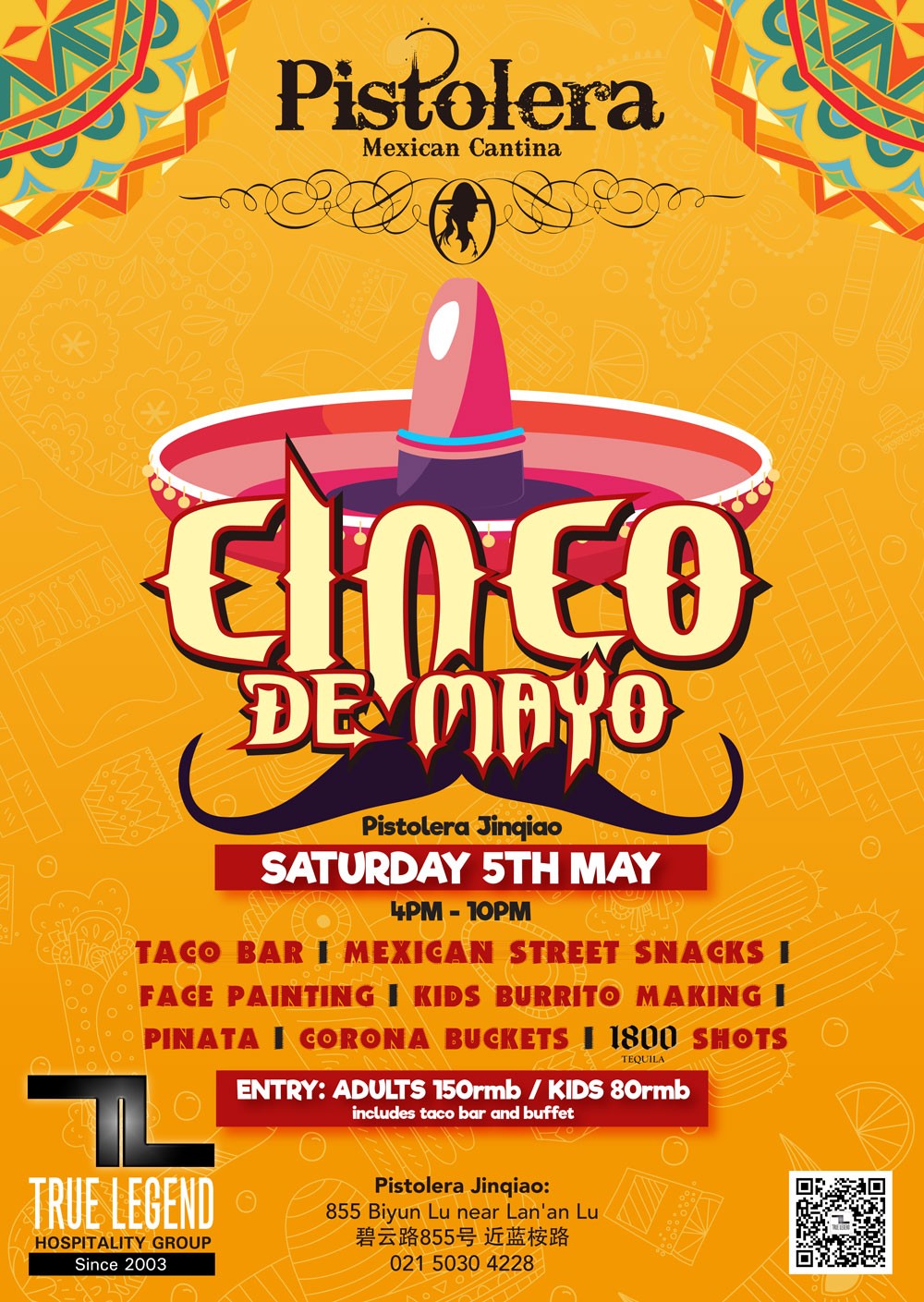 Cinco De Mayo at The Rooster equals crazy food and drink deals! The official party is on the 5th, but they will be celbrating all weekend long. On Friday and Saturday between 5-7pm get a FREE quesadilla with each Altos Paloma! All nachos and quesadillas will be 50 percent off on Saturday, and with Bloody Marias and Altos Palomas added to their weekend Free-Flow Cinco De Mayo Brunch, Saturday and Sunday from 11am-3pm! See you at The Rooster!

Roosteritas for RMB60, Altos palomas for RMB50, frozen margaritas for RMB40, Four shots of Olmeca Tequila for RMB100 and 50 percent off nachos and quesadillas.11am-close. The Rooster, see event listing. It sounds like The Spot has quite the party going on this Cinco de Mayo with promises of a hot guest bartender, sexy dancers, a DJ and a live band. Mexican food such as nachos and quesadillas will be 10 percent off menu price from 6-10pm and from 9.30pm on rounds of tequila shots will be flowing on the house.

10 percent off of nachos and chicken quesadillas. 6pm-10pm. The Spot, see event listing. Shanghai's well-heeled will likey be heading to the Bund for a swanky party brought to you by Unico and MVP Events with sponsorship by ALTOS. The festivities will be lead by DJ S.Kiv and DJ Tuto spinning sick Latin beats. Special guests Thomas Dyani and Toby Senior will perform live percussion with Felix Lopez as 'El Mariachi.'

One of Shanghai's oldest Mexican bars, and home of the original ladies night, has partnered up with Olmeca Tequila for an all day garden party this Cinco de Mayo. They will have DJs, mariachis, Zumba, face painting and many more activities. There's also a taco buffet to soak up the free flow Carlsberg and frozen margaritas. It wouldn't be a Zapata's party without tequila shots, which they will be offering hourly. 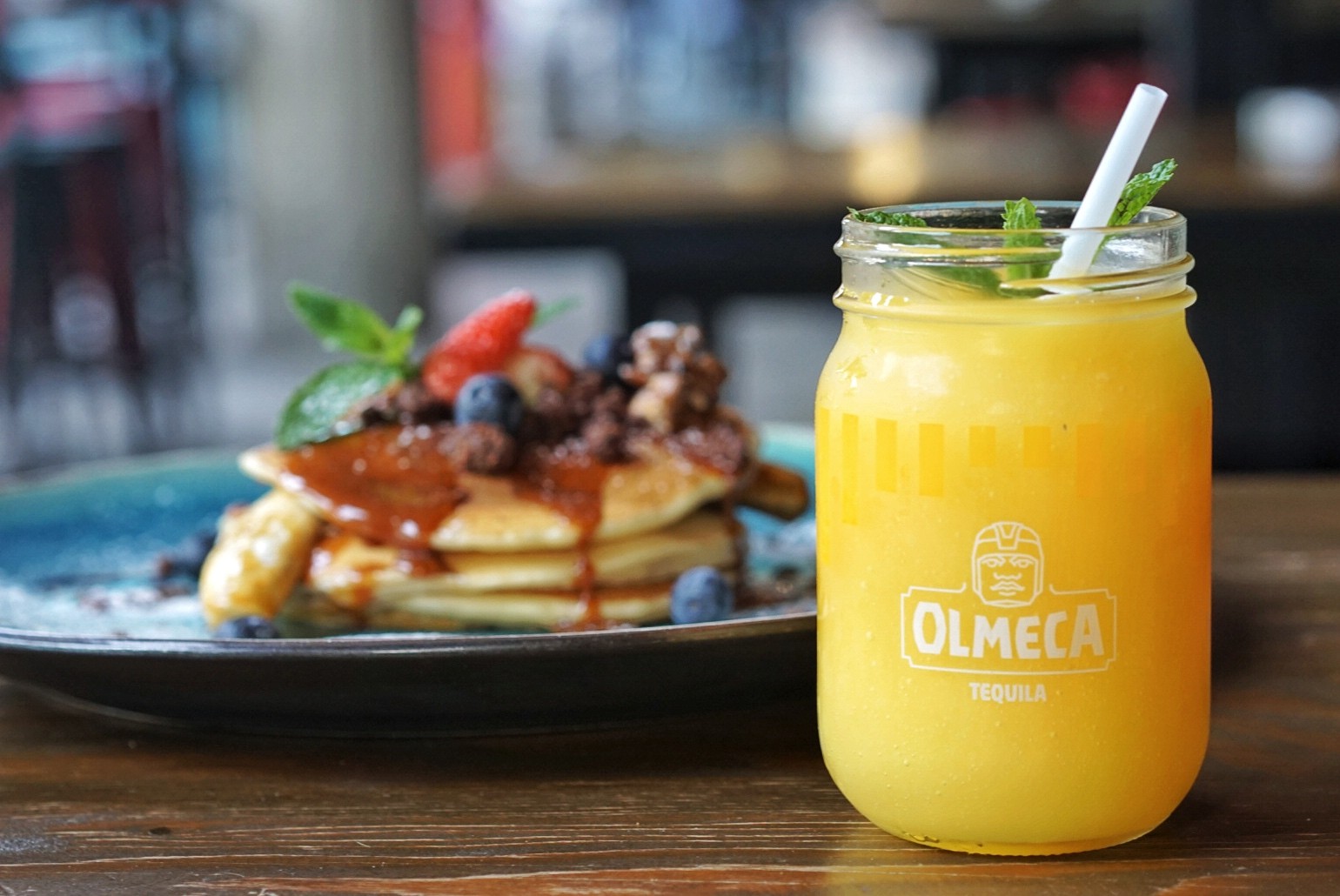