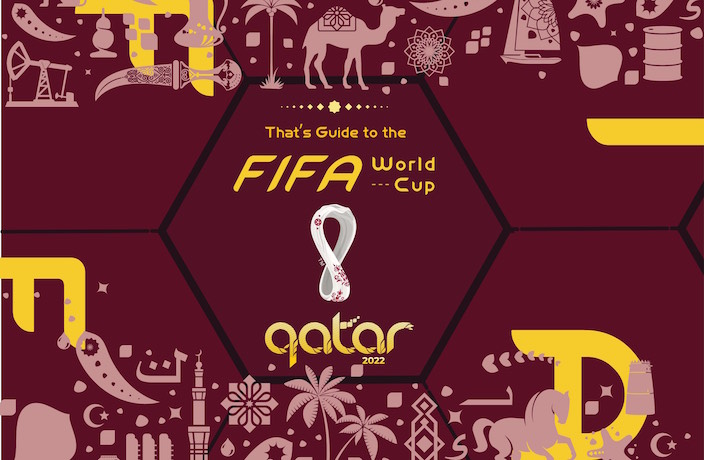 The World Cup is football’s most prestigious tournament, not only has it birthed some of the world’s great sporting moments, but it is also the most-watched international sporting event on earth.

This first article is a brief rundown of where and when the tournament and games will take place and some of the controversies that have occurred during its buildup. And, of course, where to watch it in Shanghai.

This is the That’s Shanghai Guide to the FIFA World Cup Qatar 2022.

Undoubtedly the biggest controversy during the buildup to this year’s World Cup (aside from BeerGate) is the issue of migrant workers. There have been reports of appalling working conditions, withholding of passports and work permits and abuse and exploitation towards those tasked with building stadiums, roads, hotels and the new airport and metro lines.

Where to Watch It 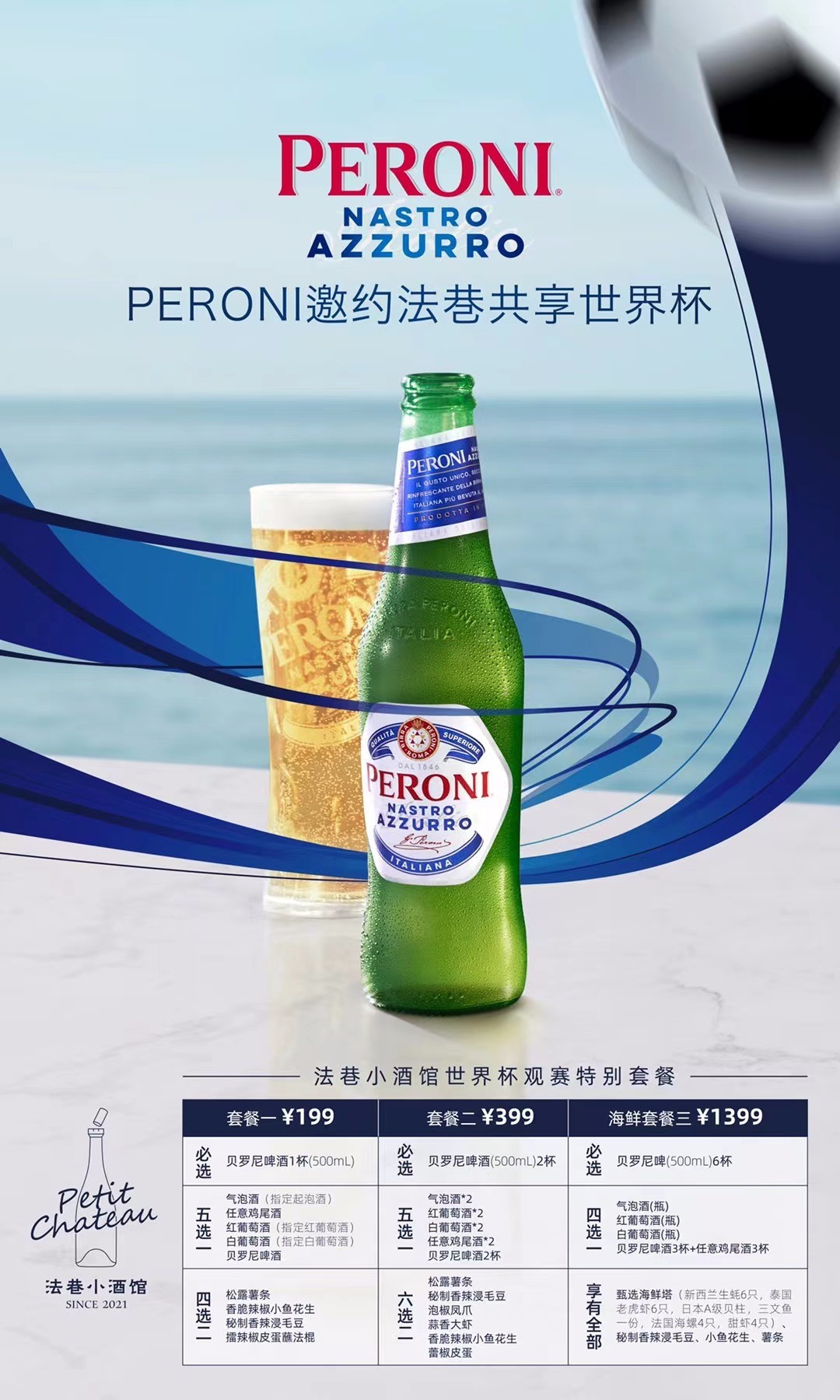 Scan the QR code to find out more: 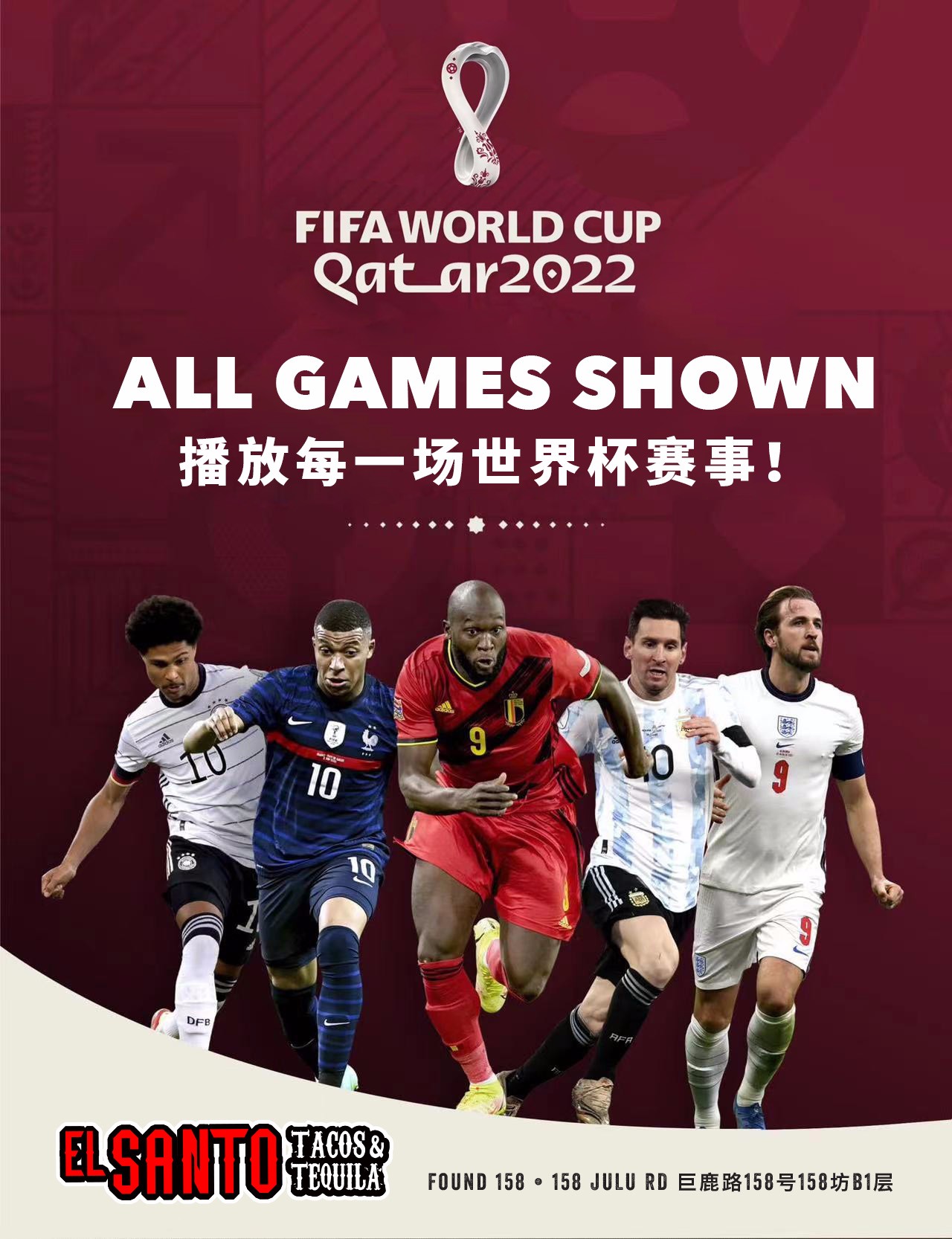 El Santo will be showing every single game on their big screens... and there is a 0% chance of a booze ban in this fanzone. Come and test your World Cup knowledge on the opening night of the tournament. Navigate six rounds featuring past and present, win some booze, then stay on to watch the opening game, Qatar vs Ecuador, which kicks off at midnight.

Scan the QR on the flyer above to sign up now. Yugo Grill will be offering a promo on Serbian Red Wine, a Meze Platter and Bottle of Red for RMB380 or a Hot Dog plus Beer or Wine for RMB120.

Expect things to get a little wild when Serbia score! There is no ticket or presale required during group stage at Cages, so bring your crew and cheer on your favorite players and teams!

Cages Jing’an will be open until after the final whistle each day.

During group stages, Cages Huangpu will be open Friday and Saturday until the final whistle and open for the 6pm and 9pm games Sunday through Thursday. El Bodegon assures us they will be big supporting both Argentina and Uruguay... so we can only assume their graphic designer is firmly in on the Argentina side of the business.

Head along for all games at a reasonable hour, to be enjoyed with Choripan and Patagonia IPA for just RMB86.

Be warned though – things could get Messi... Pick which Cotton's villa garden you want to watch the game in, it'll be on in both. Head to La Barra to watch the World Cup games together and celebrate scoring moments with new friends and a multitude of deals, as seen on the poster above. Lounge by Topgolf is showing all the games – yes, even the 3am ones. Message them to book the VIP rooms, or come early to grab your seats in the bar area with two x 3 meter big screens and six TVs! Tacolicious will be showing all games on multiple screens, and you can win drinks playing Scorito, while there will also be food and drink deals. Game will be shown on the third floor Chez JOJO terrace giant screen.

The Camel X The Smokehouse The Camel X The Smokehouse is showing EVERY. SINGLE. GAME. At Abbey Road, it is RMB100 for three draft beers or gluhwein. Viva will  be showing all games before midnight, with those later shown upon request, while the kitchen will be open until 11pm with a special menu. 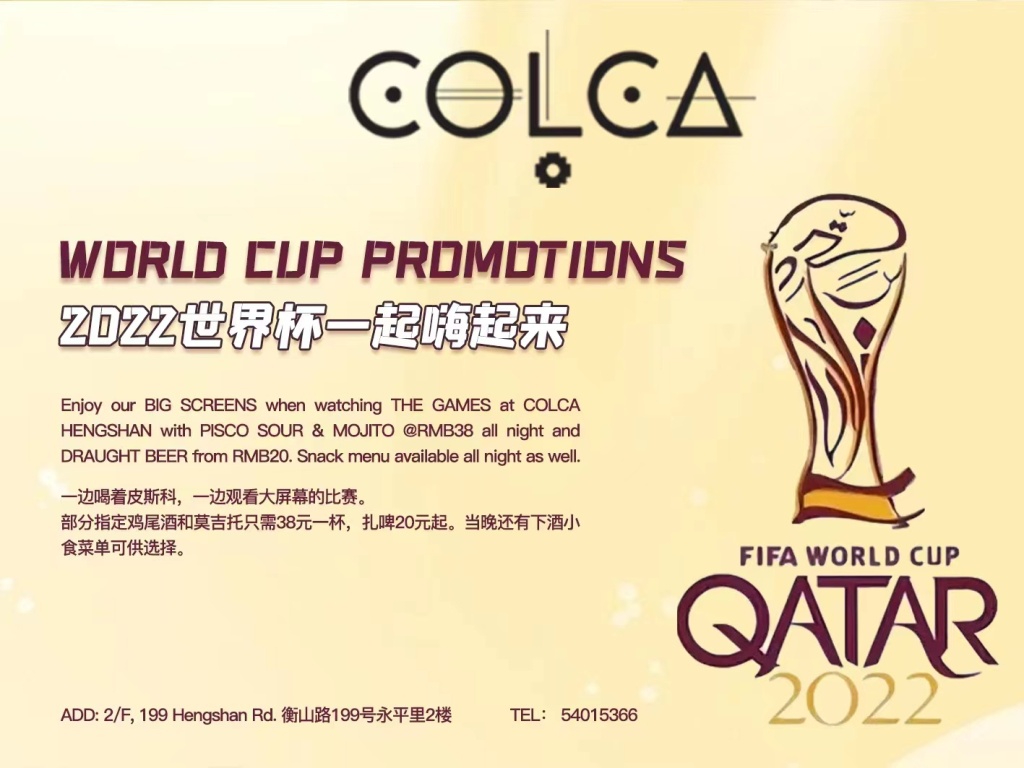 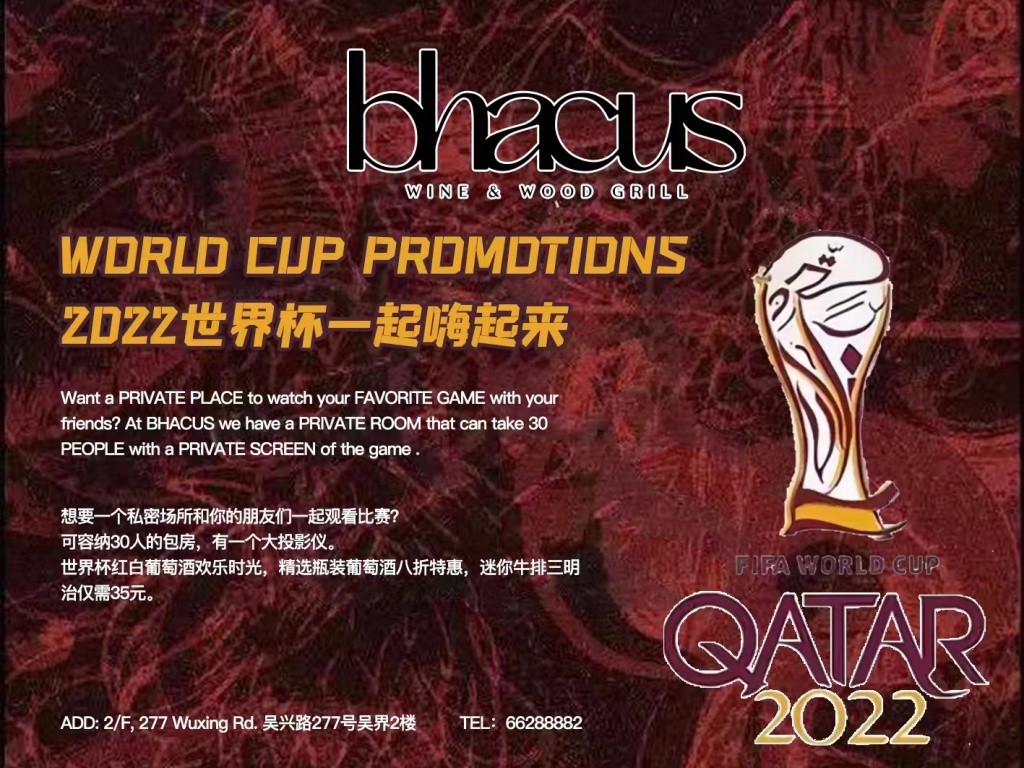 Bhacus is offering a private room that can take up to 30 people, give them a call on the number on the poster above if you're interested. 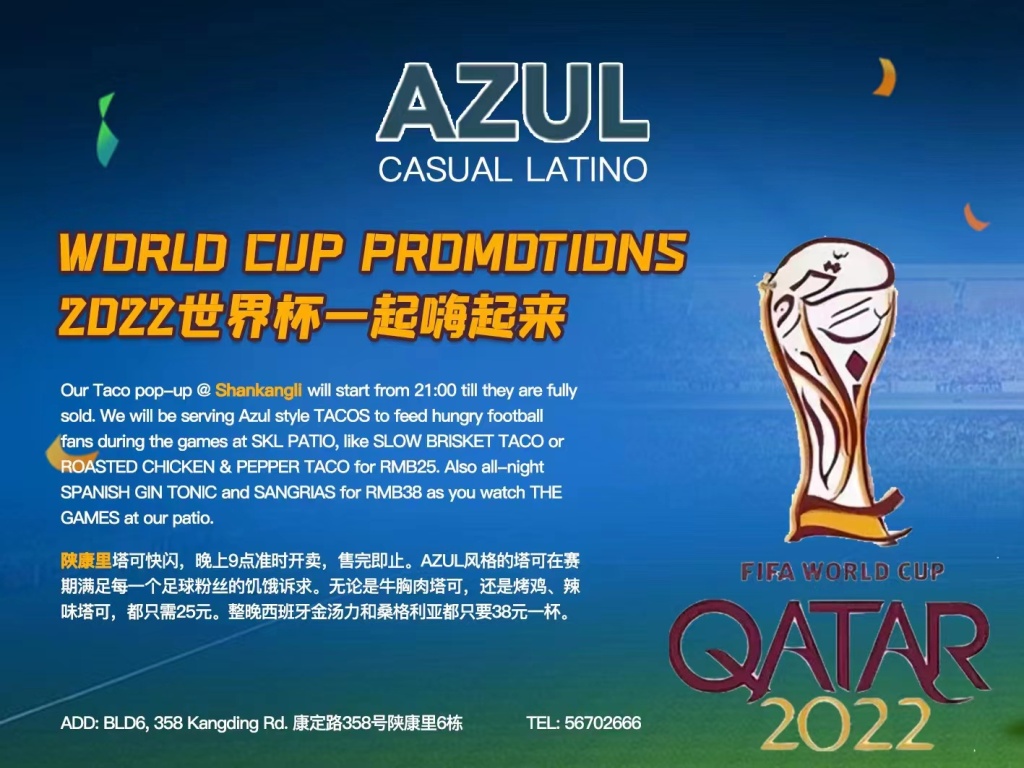 Azul will feature a Taco Pop-Up from 9pm until sold out. All the good stuff will be on offer, as will Gin and Tonics and Sangria for RMB38. 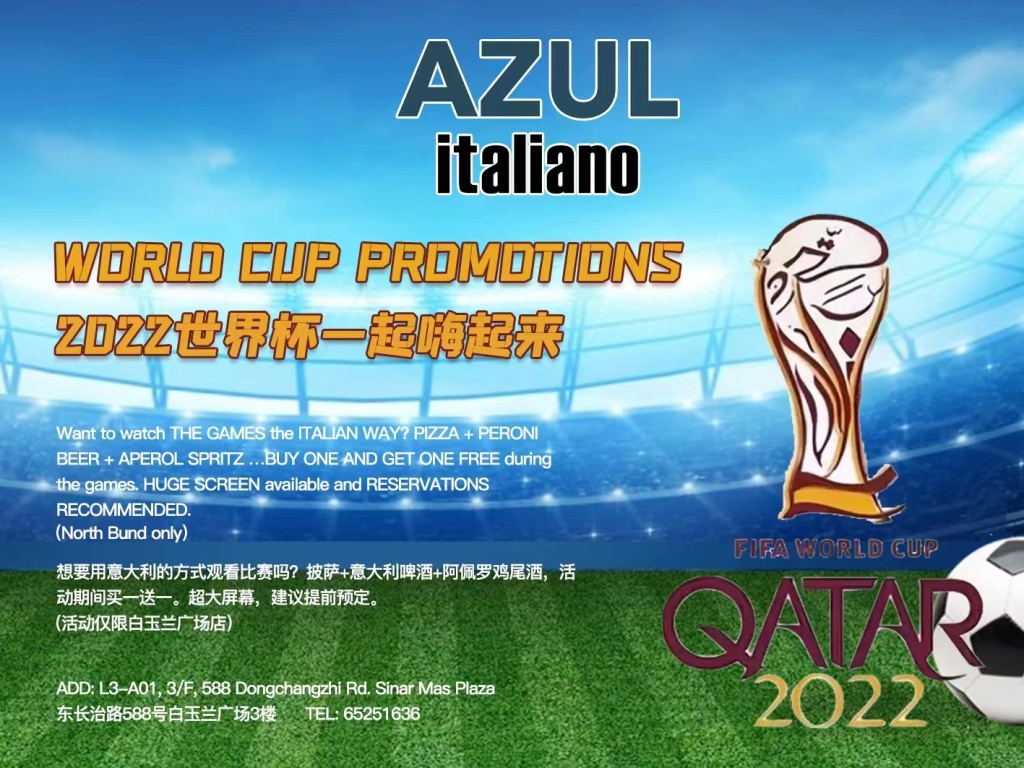 At Azul Italiano it is BOGO on Pizza, Peroni Beer and Aperol Spritz during the games, which will be shown on big screens, of course. At Xouk, all the games will be shown until late, while draft beer will go from RMB20 and snacks from RMB30. The Pearl will be showing selected games. Scan the QR code on the poster above to check their schedule. 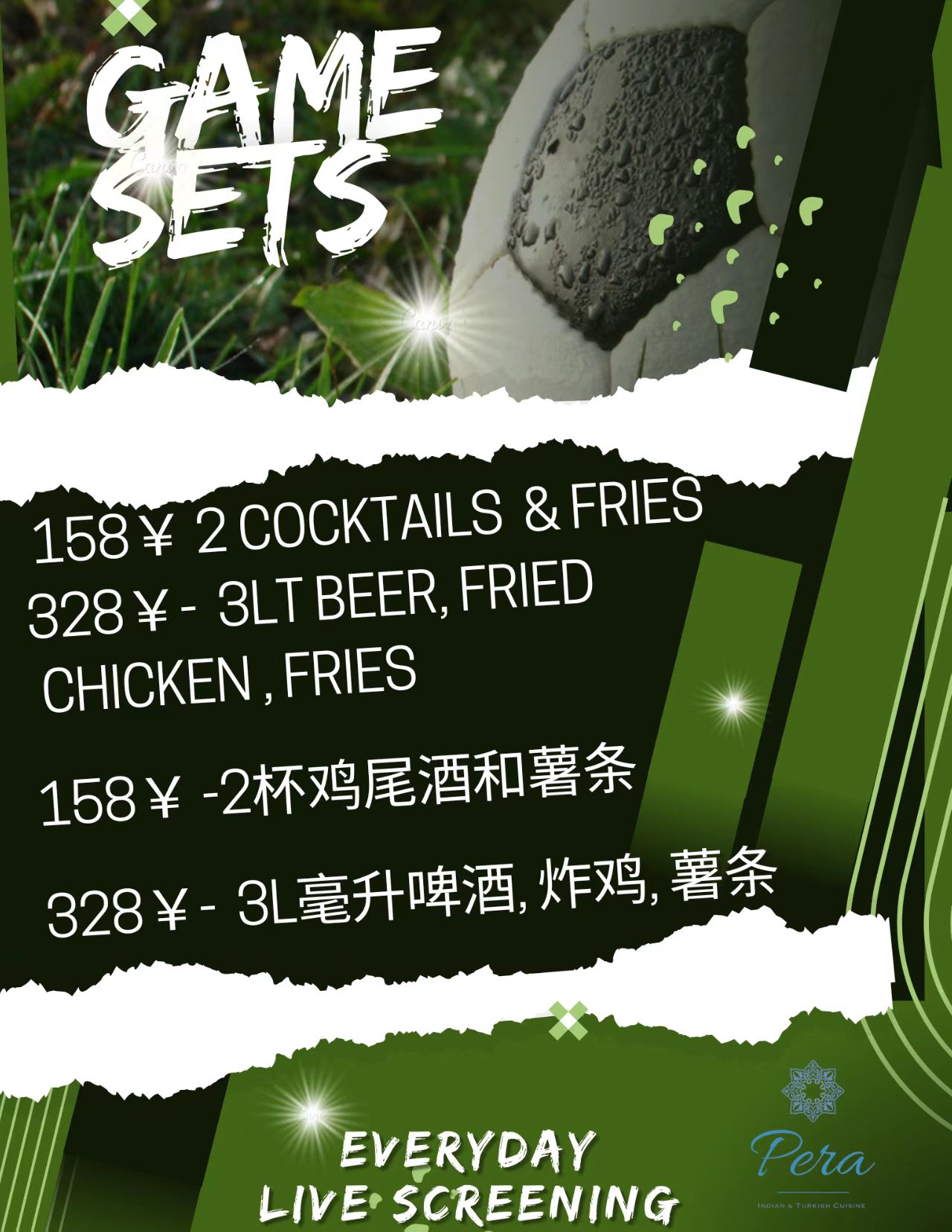 Pera is showing the games everyday, with RMB158 for 2 Cocktails and Fries, RMB328 for 3 liters of Beer, Fried Chicken and Fries.

Kebabs on the Grille Laowaijie 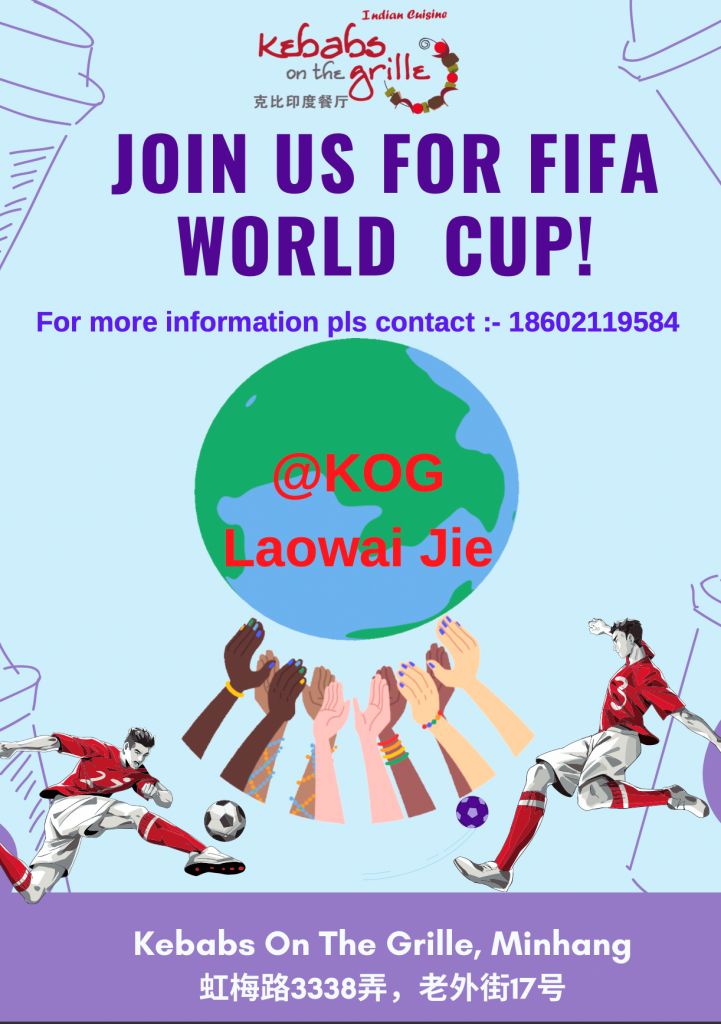 If your looking for the World Cup accompanied by some fine Indian food, Kebabs on the Grille is you place. Connect with us on WeChat by scanning the QR code below: 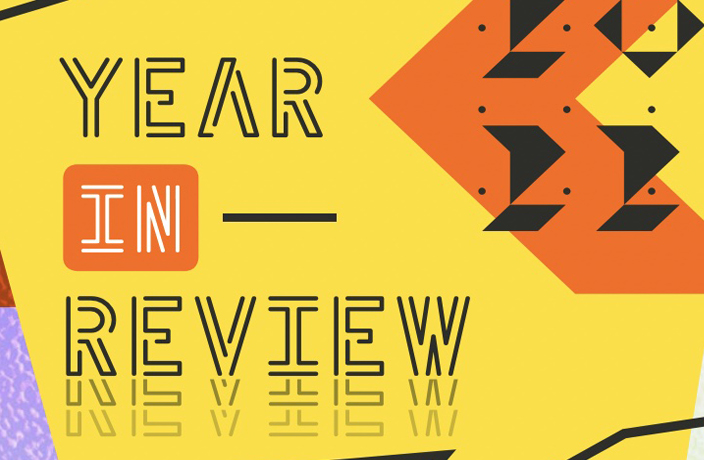 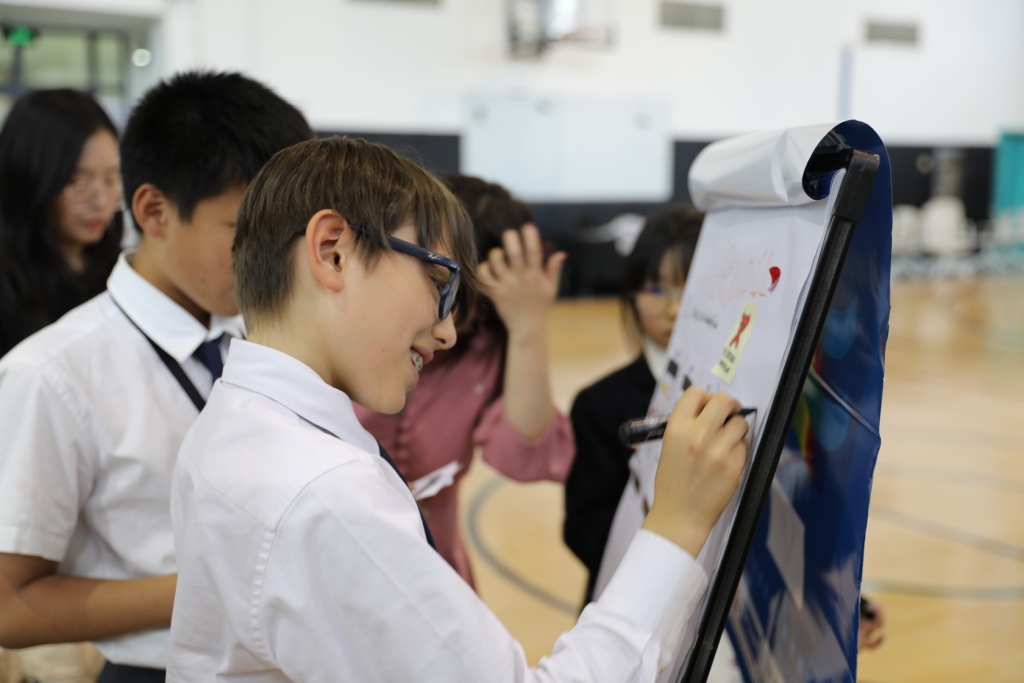 Everything you need to know about Group B in this year's FIFA World Cup.

Everything you need to know about Group D in this year's FIFA World Cup.