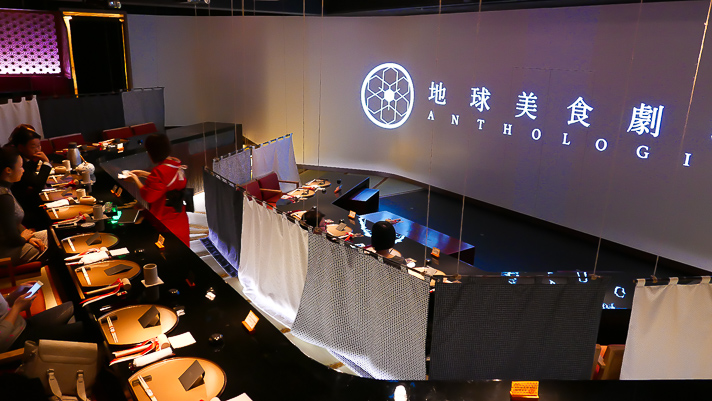 Without a doubt, Anthologia is the craziest restaurant I have ever reviewed. If somebody had asked me to imagine a high-end Japanese kaiseki seemingly influenced by Ultraviolet, with three auditorium-like tiers of seats, an enormous screen, surround sound and a rapping MC, I would have called them crazy. Yet here we are at Anthologia, a kaiseki restaurant from the same group that brought the city Sushi Oyama, Ochobo, Kappo Yu and elEfante, serving an eight-course multi-sensory menu presided over by a kimono-clad, face paint-wearing Japanese chef by name of Bulizo (meaning 'amberjack and elephant').

Kaiseki is a traditional form of Japanese dining and to an extent has always been 'multi-sensory,' but Anthologia takes it to a whole other level. During this meal there is a rap about lobsters, ceremonial swords, wreaths of fairy lights, dry ice, pyrotechnics... and hotpot. 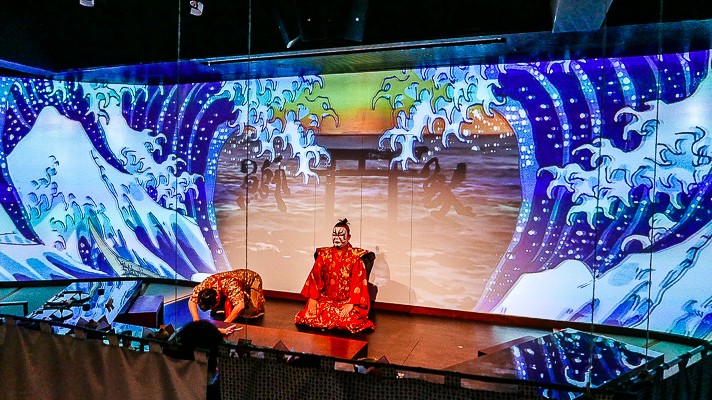 Set in an auditorium-like room, waitresses in kimonos guide guests through tatami mat avenues to their seats in either the front, middle or back row. You'll be sitting in a line with other diners facing the front screen where the action happens. You're also expected to arrive at 6.30pm in order for the show to start at 7pm, although in reality things don't get started until 7.20pm thanks to a few tardy bad asses.

At your seat, you'll see a little wooden mallet with a ribbon tied around it. Why? For smashing open your first course, obviously. In what must be a fairly mammoth co-ordination of service and kitchen staff, all guests are served simultaneously, and just in time for on-screen visuals and music to accompany each dish. 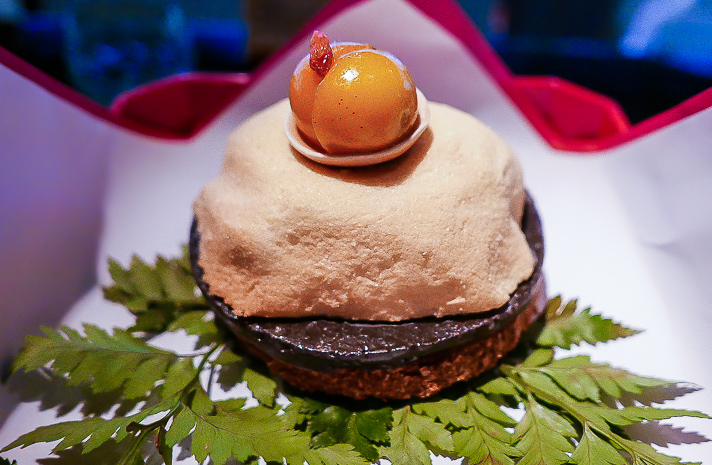 Our first course is modeled on a lunar New Year theme, with a candied kumquat perched over a salt mound (to be smashed open via mallet), wherein lies a portion of beautifully fragrant steamed seabass with truffle. 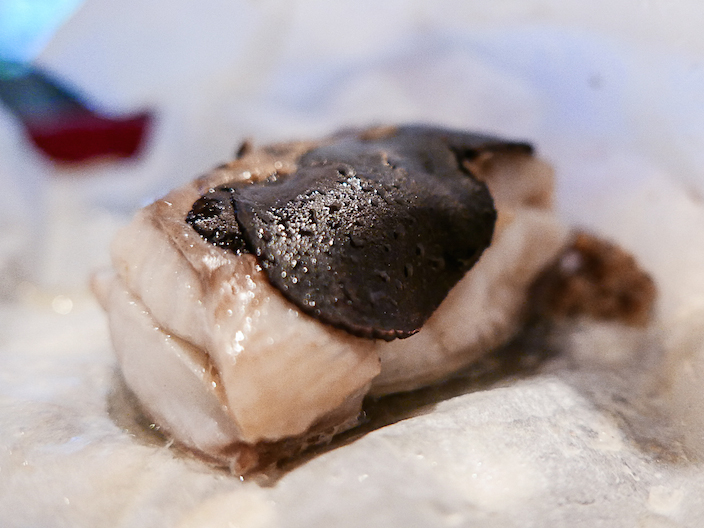 Next, the room plunges into darkness as they introduce a monkfish course. 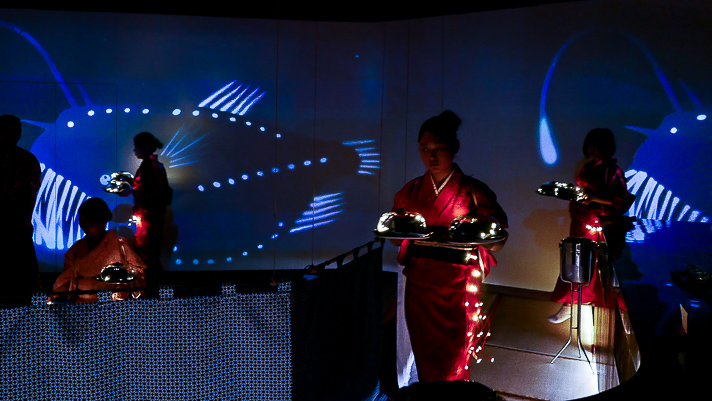 The lights go out, and the MC narrates the monkfish's deep-water journey as the geishas bring in glass orbs wreathed with fairy lights. On these glass orbs is an ankimo (monkfish liver) mousse, a delicacy often included in purer form on the menu at Anthologia's excellent sister restaurant, Sushi Oyama. 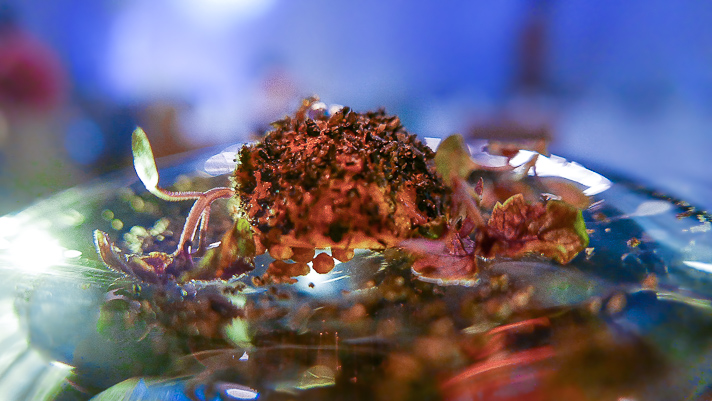 Following this comes a rap about lobsters courtesy of our MC, who has also donned giant lobster claws for the occasion. Here the visuals descend into Warholian kitsch, accompanied by a bouncy J-pop soundtrack. It becomes clear that for all its ambition, Anthologia isn't a restaurant that takes itself too seriously. 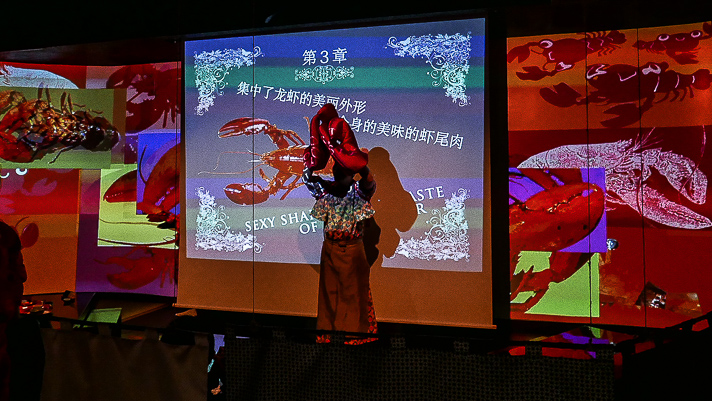 Luckily this unusual lobster course is good enough to warrant the ceremony, paired with a robust red miso reduction. Odd plates though. 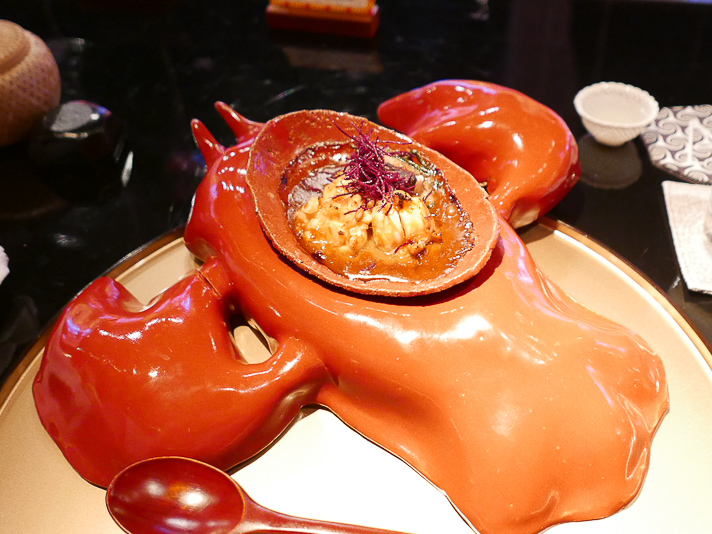 Another twist in the Anthologia tale follows suit, and this time we find ourselves in a snowy wonderland onscreen as a white Japanese radish dish is placed in front of us. 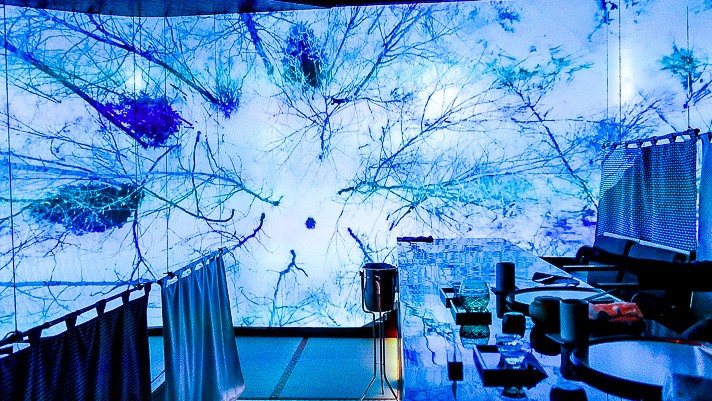 We're instructed to tug on a piece of paper to activate a well of dry ice underneath the dish, which sends snow-like ripples cascading over a pair of julienned white radish salads. One has a tart, citrus flavor, the other fruity with a twist of shiso. Dry ice might be cliché by now, but the effect in this instance was incredibly beautiful. 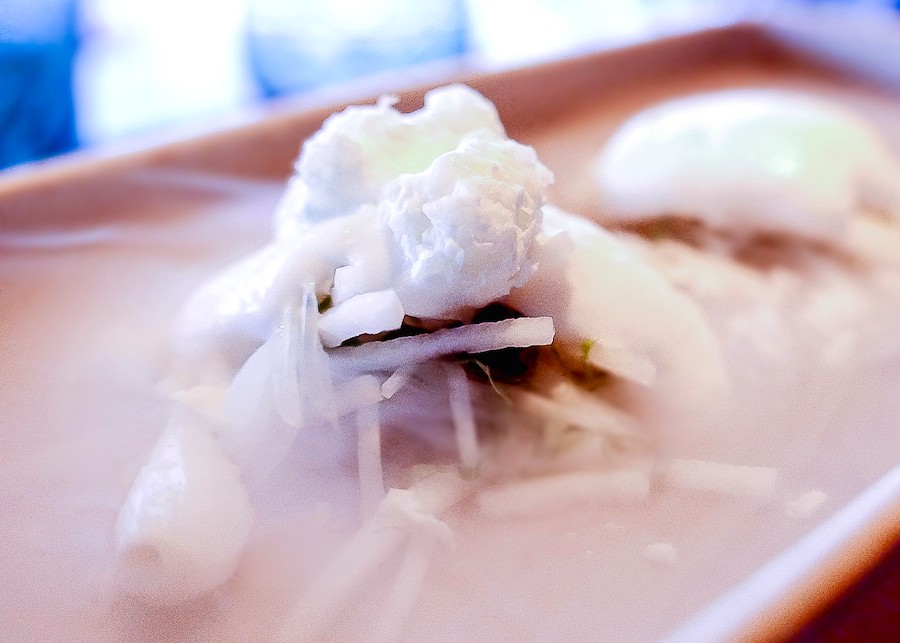 After this is where the value point of a meal at Anthologia comes in: tuna in three ways. Minced otoro (supreme fatty tuna belly) with a double layer of superb uni (sea urchin) on top was a delight. 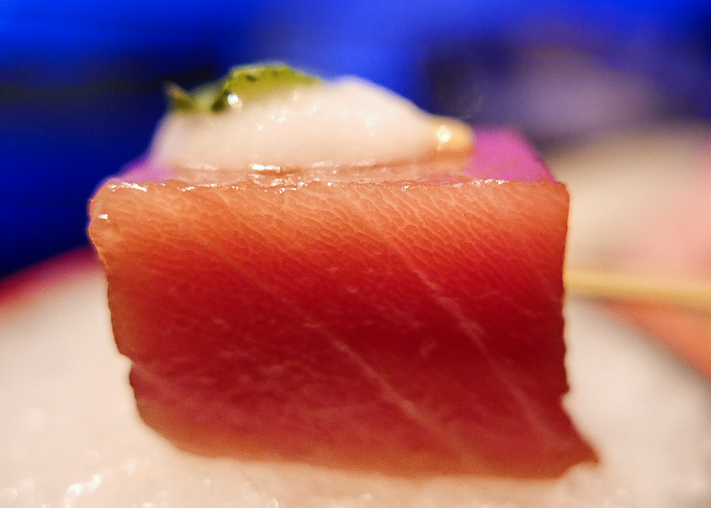 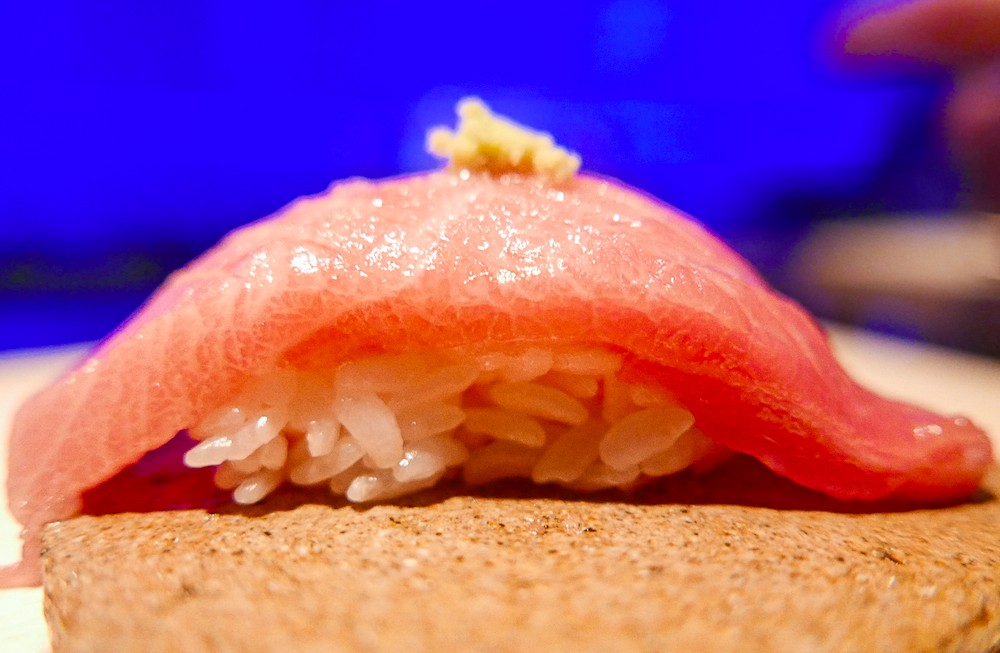 By this point we've had fairy lights, a rap and dry ice, so it seems pyrotechnics are par for the course. Wagyu beef slices team up with charred yam and miso sauce, backed by literally an open flame. The barbecue effect works, although the beef slices are a little thin and we weren't in love with the topping of fresh sprouts. 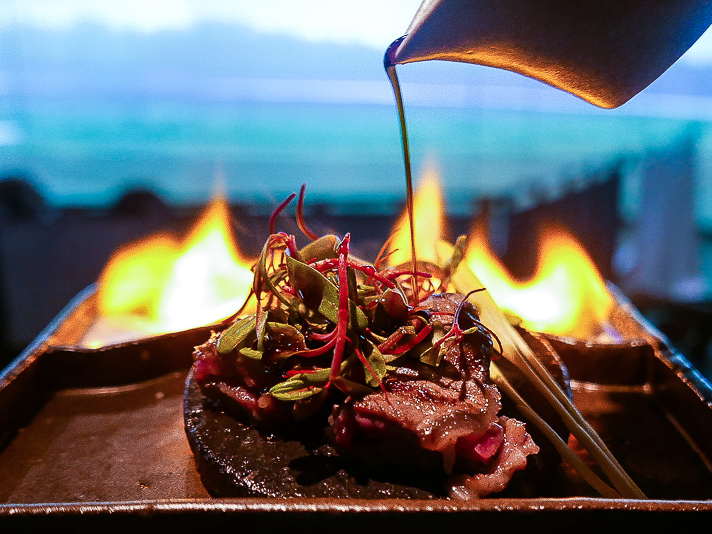 The final savory course takes us to luxury hotpot, which sees an enormous, pre-dressed hairy crab imported from Hokkaido stewing with rice and spring vegetables. 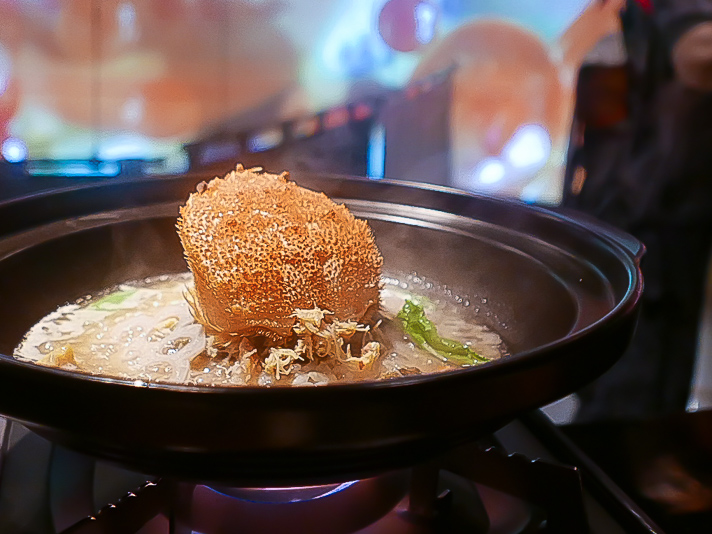 Dessert comes in seven mini variations on yuzu, of which an excellently fresh and tart ice cream is the best, although it is closely followed by a sugar-studded jelly. 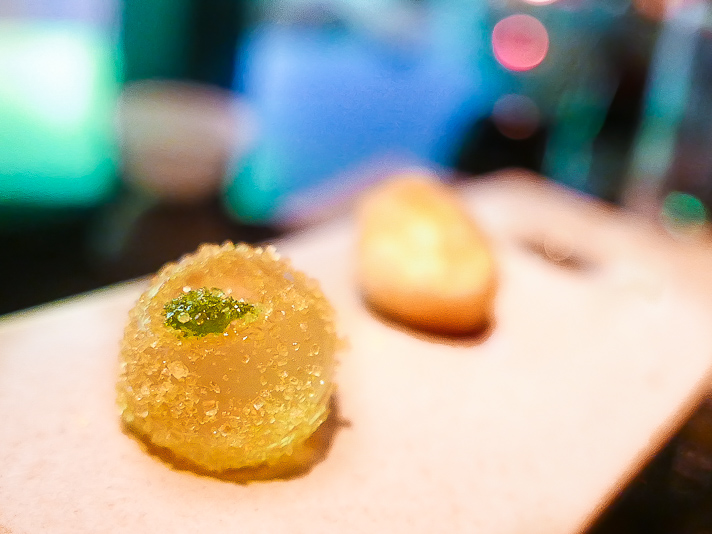 While the meal and visuals might be lighthearted, the service is unwaveringly professional and in line with the other high-end restaurants of the Fulu Restaurant Management group. Menus and service from upper-level service staff are fully bilingual, including Chef Bulizo himself, who personally greets each party after the meal is over.

It's an eccentric experience to be sure, but Anthologia's success lies in making guests feel special. We'd say it's a good choice for impressing a date, but larger parties of four are catered for with table booths in the back row. 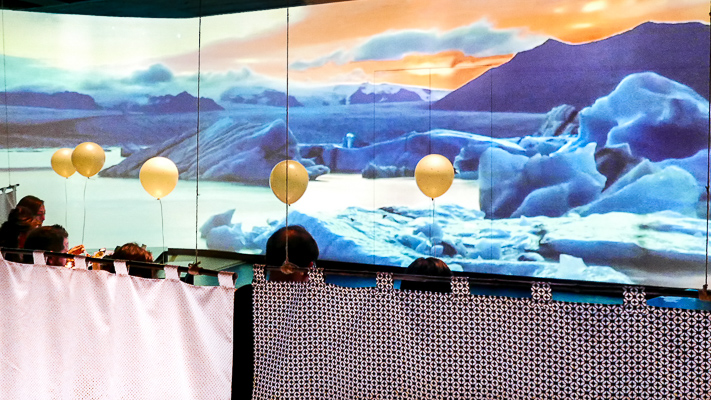 Paul Pairet brought true multi-sensory dining to Shanghai (and indeed, the world) with Ultraviolet, which is a truly uncompromising restaurant in terms of food quality, innovation, visuals, service, atmosphere. Anthologia, while a fun experience and a laudable passion project, is not on the same level. But then again, it's also not RMB6,000. A meal here sets you back RMB980 per person, and is money well spent in our opinion.

See a listing for Anthologia