Two foreign tourists from Senegal have been put on a ‘blacklist’ following an incident at the Mutianyu section of the Great Wall in Beijing’s Huairou district.

On April 30, the two men walked onto a section of the wall which is off-limits to tourists, according to People’s Daily. The pair were identified by the ticket registration system and surveillance footage.

A post on the Mutianyu Great Wall scenic area’s official WeChat account explained the incident. It also said that visitors are not allowed onto the ‘wild’ and ‘undeveloped’ part of the wall due to safety reasons and in the interest of preserving the wall. 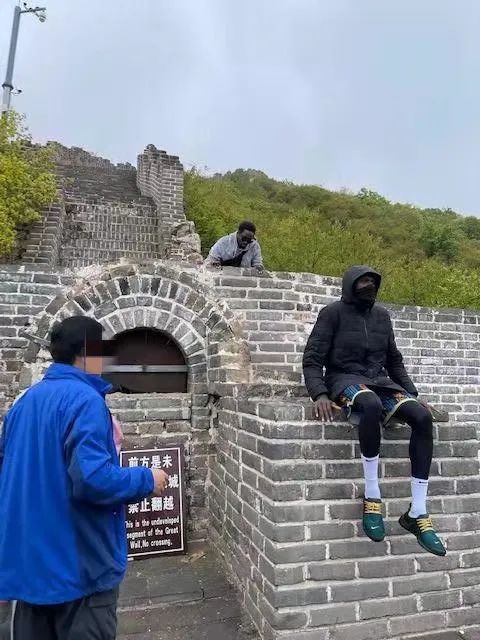 The image shows the two tourists returning from the restricted part of the wall. Image via Mutianyu Great Wall official WeChat account

Tourist behavior on the Great Wall came under the spotlight in March of this year when three Chinese tourists were issued with fines for graffitiing on the Badaling section.

It’s also not the first time that the behavior of foreign tourists in China has made headlines. In October 2018, three foreigners were filmed causing damage to a wall at the New Summer Palace (Yiheyuan) in Beijing’s Haidian district.

In 2015, the Chinese government’s Tourism Department created a blacklist for ‘uncivilized’ tourists. Tourists on the list would be left with a “long-lasting memory,” according to the then department head.

It’s not clear if the two Senegalese tourists are on an official government-mandated blacklist or a blacklist created by the Mutianyu Great Wall scenic area. The original WeChat post simply states that the pair will not be allowed to purchase tickets in the future.

China has made a concerted effort in recent years to crack down on tourists deemed ‘uncivilized.’ Our advice? Stick to the rules and don’t be a nuisance.