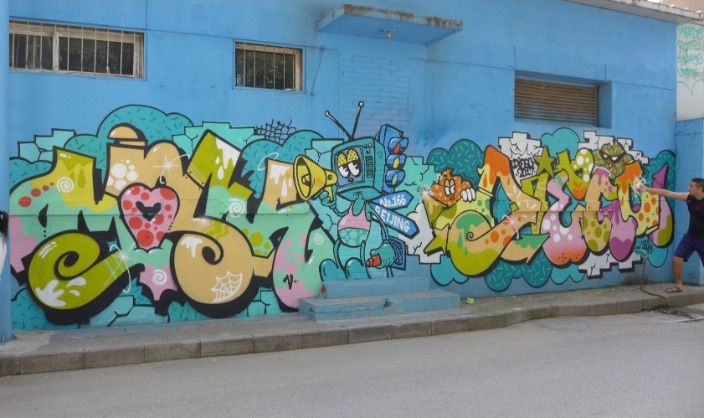 Shanghai-based author Tom Dartnell has been documenting graffiti since 1988. In recent years, his attention has turned to the small but intriguing graffiti scene in Beijing.

Beijing Graffiti is a recent book co-authored by Dartnell along with Beijing photographer Liu Yuan Sheng, also known as ‘Liu Laoshi.’ The book features Liu’s photographs of graffiti works by various artists around the capital city. The images are accompanied by interviews in which each artist gives their thoughts on Beijing’s graffiti scene. 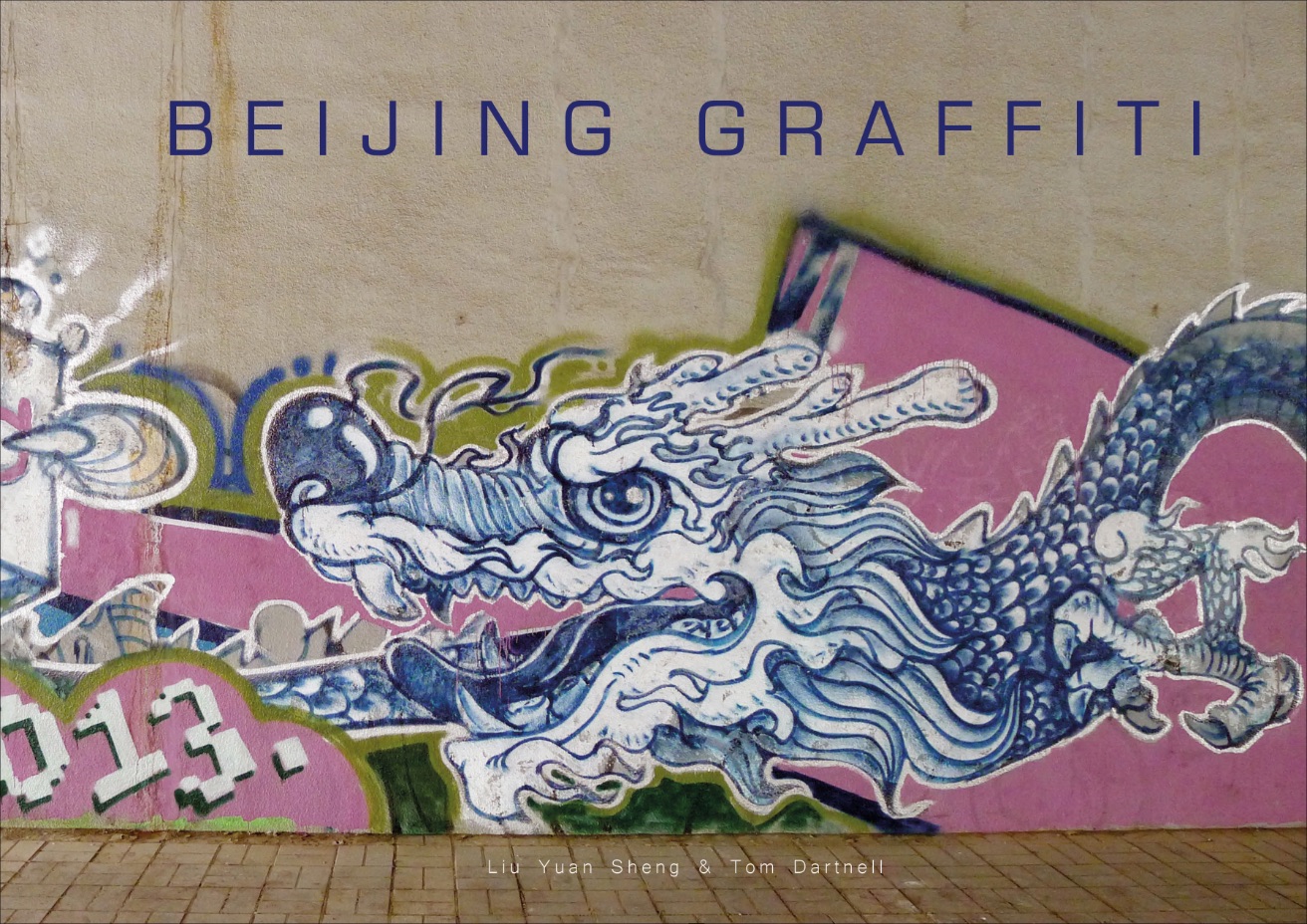 ‘Beijing Graffiti’ was co-authored by Dartnell along with Liu Yuan Sheng.

That’s talked with Dartnell about his own passion for graffiti and the unparalleled work of Liu Laoshi in photographing Beijing graffiti.

You started covering graffiti in 1988 in Brighton in the United Kingdom. Why did you become interested in graffiti in the first place?
I got into it at the tail-end of graffiti’s arrival in the UK. It came over around 1983 or 1984 as part of the hip-hop package from New York. That was the first wave. In 1983, I was only nine years old so I wasn’t really aware of it. But by the time I was around 14 in 1988, I was into it and knew what it was about.

I started seeing it in Brighton where I lived. I started off documenting it, just taking photos of everything I saw. Over my adolescent years, I got to know a lot of graffiti artists. By the early ’90s, I was heavily involved and I was painting a lot. This was before the internet and before the explosion of street art and Banksy. So the public perception was much different and it was much more of a secret society than it is now. 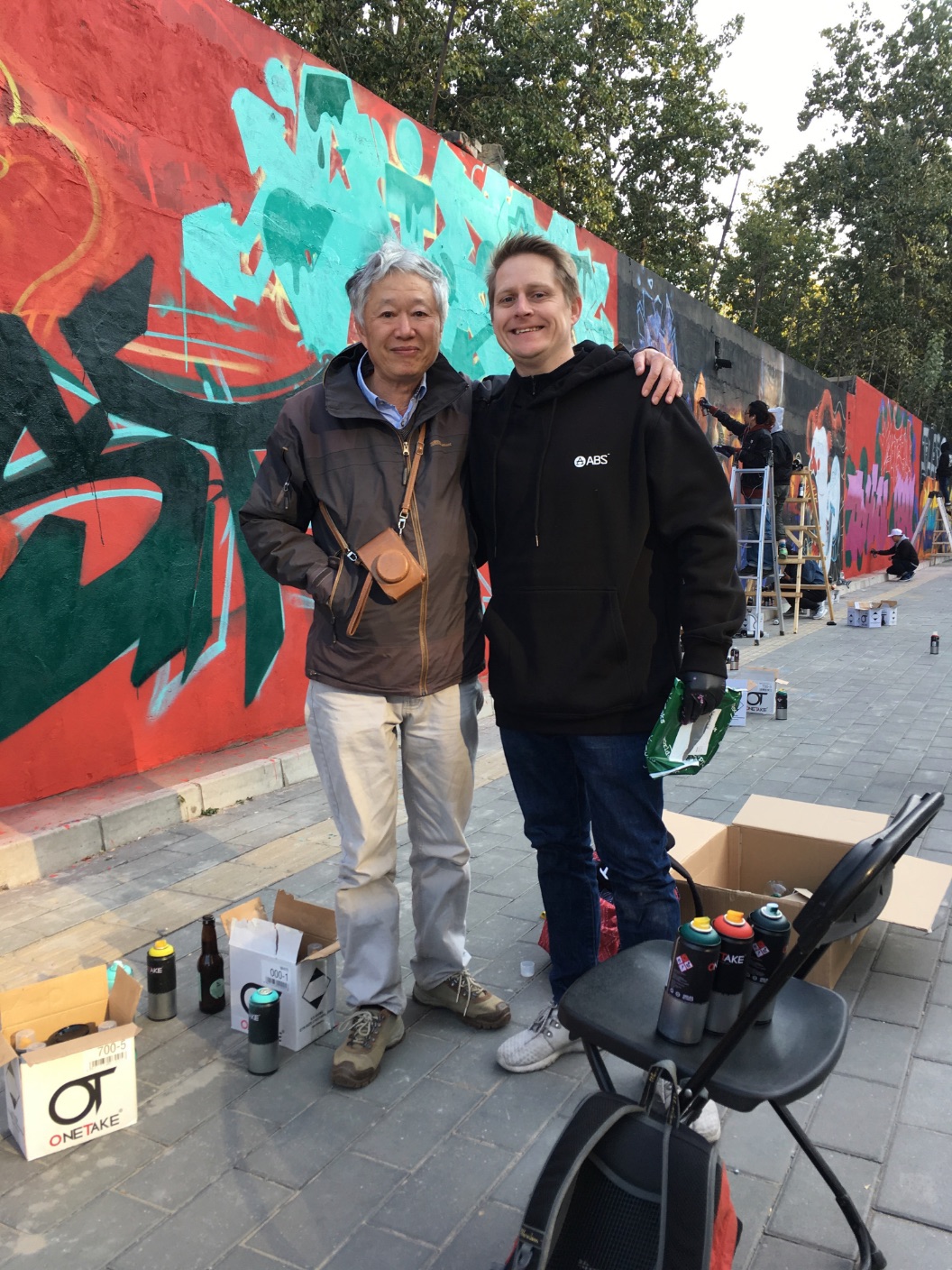 Co-authors Liu Yuan Sheng and Tom Dartnell pictured together at a 2017 meeting of Neighborhood, a regular graffiti event organized by Beijing’s ABS crew.

What do you think makes graffiti attractive as an art form?
It’s interesting that you say ‘art form.’ For me, I was attracted to the social and cultural side of graffiti. I wasn’t the smartest kid in class, I was never picked first for sports and I wasn't particularly good at art either. But with graffiti, I could get some recognition. I could stand out, even if it was just among other graffiti artists.

Towards the end of Beijing Graffiti, there’s an interview with a girl called ‘Mage.’ She talks about how she was really shy. But with graffiti, she found a way to communicate with others. It brought her out of her shell. I can certainly relate to that.

Liu Yuan Sheng, or Liu Laoshi, is someone we’ve previously covered. Can you give us a sense of his importance in the Beijing graffiti scene?
I first became aware of him through a documentary about the Beijing graffiti scene. I was just fascinated by him. He was a guy in his 50s and he had this curiosity about graffiti. He had this drive to go all over Beijing and take photos of graffiti. He was the last person you would expect to do this. Back in the UK, most people of his age would be totally against graffiti – they would hate it. But this guy took a liking to it. 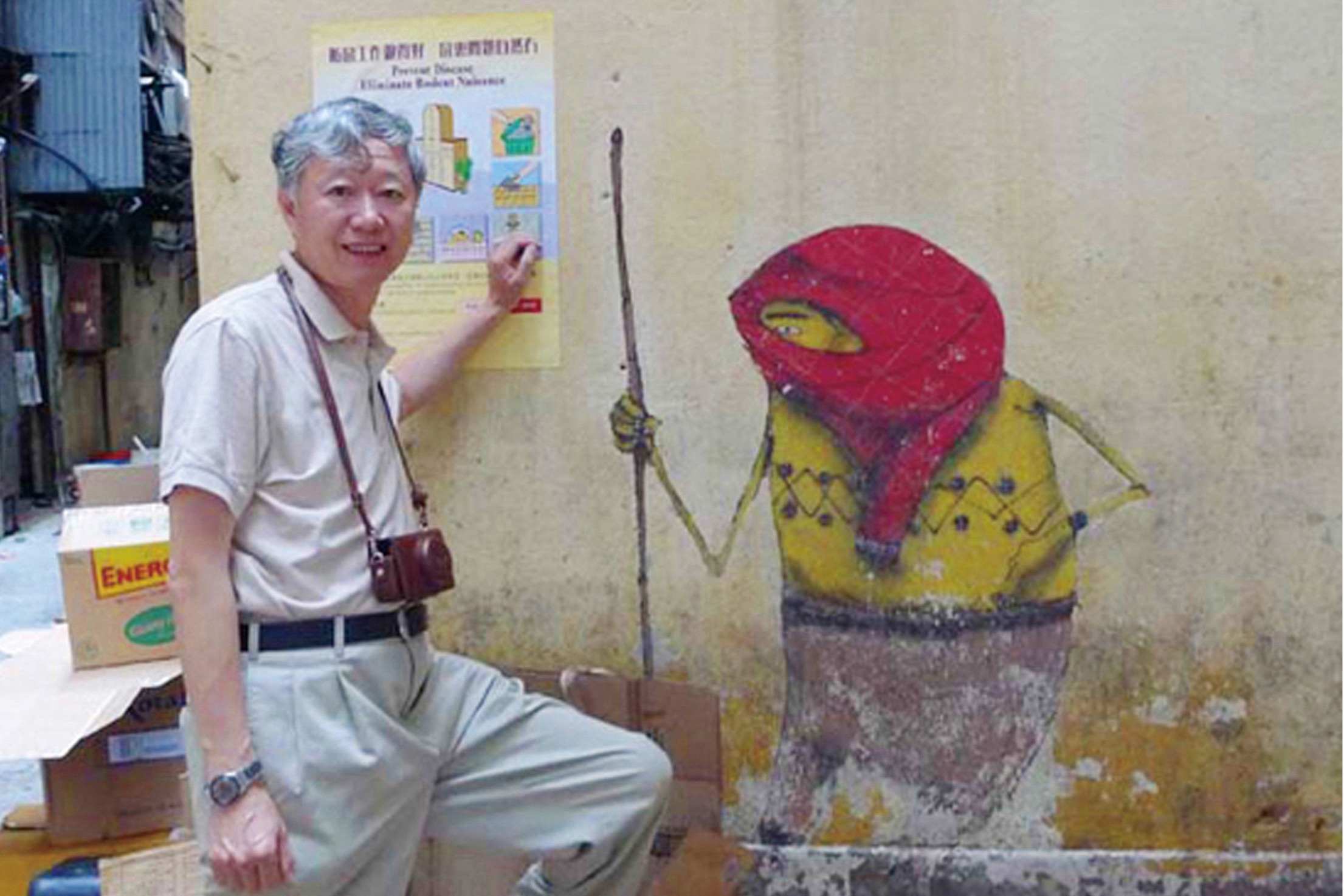 Beijing photographer Liu Yuan Sheng has been at the forefront of documenting graffiti in Beijing. He has previously documented graffiti in Hong Kong where he stumbled upon this work by Brazilian twins Os Gemeos in 2010.

And the book really is his book. I’m just there to put his photos in context from a Western perspective based on my 30 years of interest in graffiti. I don’t want to say the photos are the history of Beijing graffiti because I think you would have to explore much deeper than that and you can’t do that with one person’s photos. But the book is how he’s watched the local scene develop through his lens. He started taking photos specifically of graffiti in 2004. And he hasn’t really stopped until the last few years.

In the introduction of the book, you talk about the revolutionary sub-culture in the 1960s, the train graffiti movement in New York in the 1970s and 1980s and how there were lots of young people who wanted to express themselves through graffiti. How have artists in Beijing been influenced by Western sub-cultures and to what extent is there a Chinese influence on their work?
Graffiti really started showing up in China around the late-1990s. The big difference between when I got into it in the UK and when Chinese kids got into it is the internet. Some of the older guys in the book, like the Beijing Penzi (BJPZ) guys, got into graffiti through skateboarding. They might have seen graffiti in a skateboarding video and then become curious about it. Similarly, some of them might see it in a rap or hip-hop video and become curious that way. They may have been even more detached from the source of it in New York than I was, in terms of distance and time, but they were still able to learn about it. 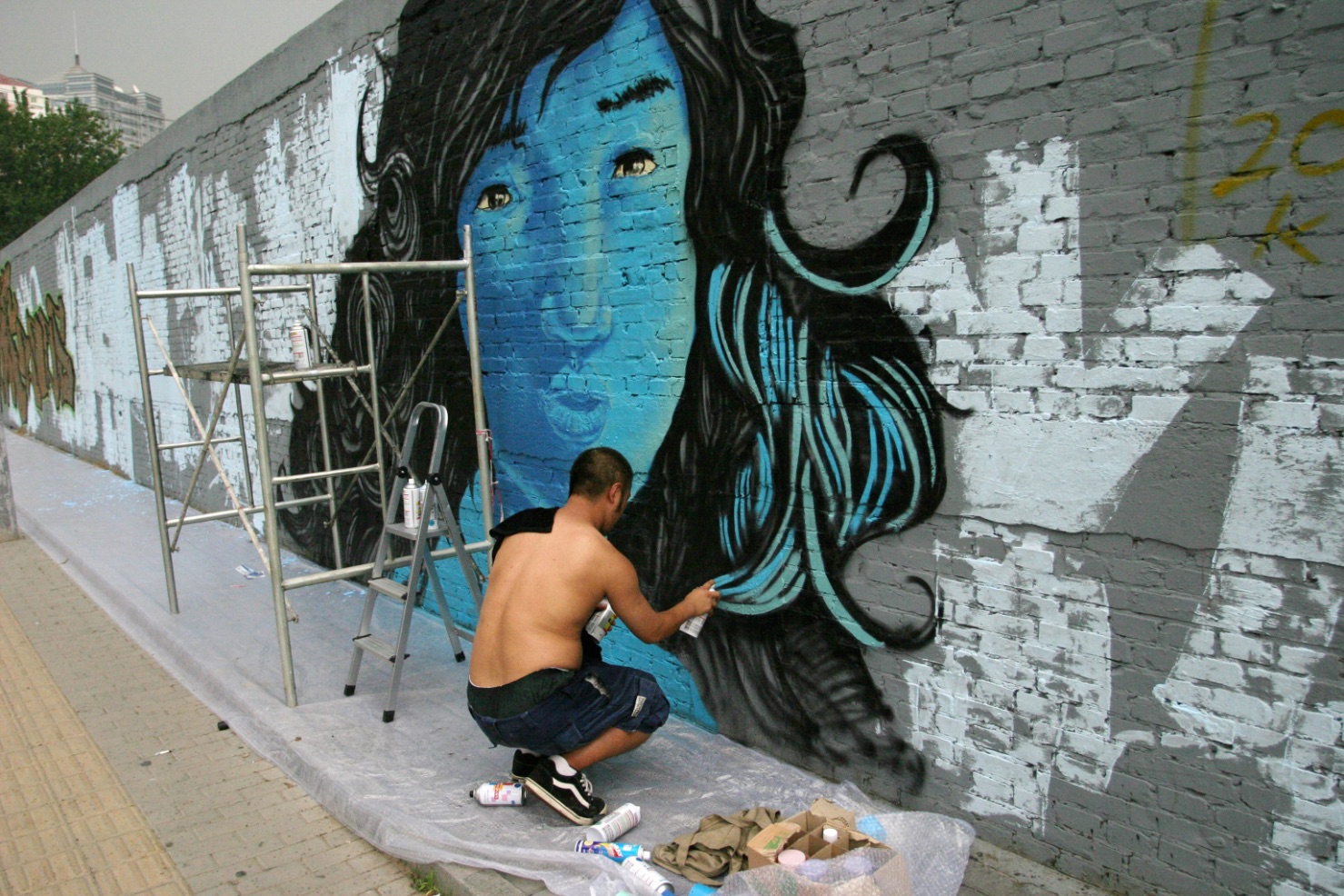 In terms of other Western influences, there are some Western graffiti artists who have traveled to China, either on holiday, to work, or specifically to paint. They’ve got in touch with some of the Beijing graffiti artists and painted with them. And that’s a great way to learn – actually having someone share firsthand knowledge in person.

“The population of Beijing is over 20 million, and ever since there has been a graffiti scene in Beijing, there have perhaps only been about 100 graffiti artists at most”

When I think about the graffiti scene around the world, I wouldn’t think, “What British influences can you see in British graffiti?” or “What French characteristics does French graffiti have?” So it's unfair to expect Chinese graffiti to have obvious Chinese characteristics. 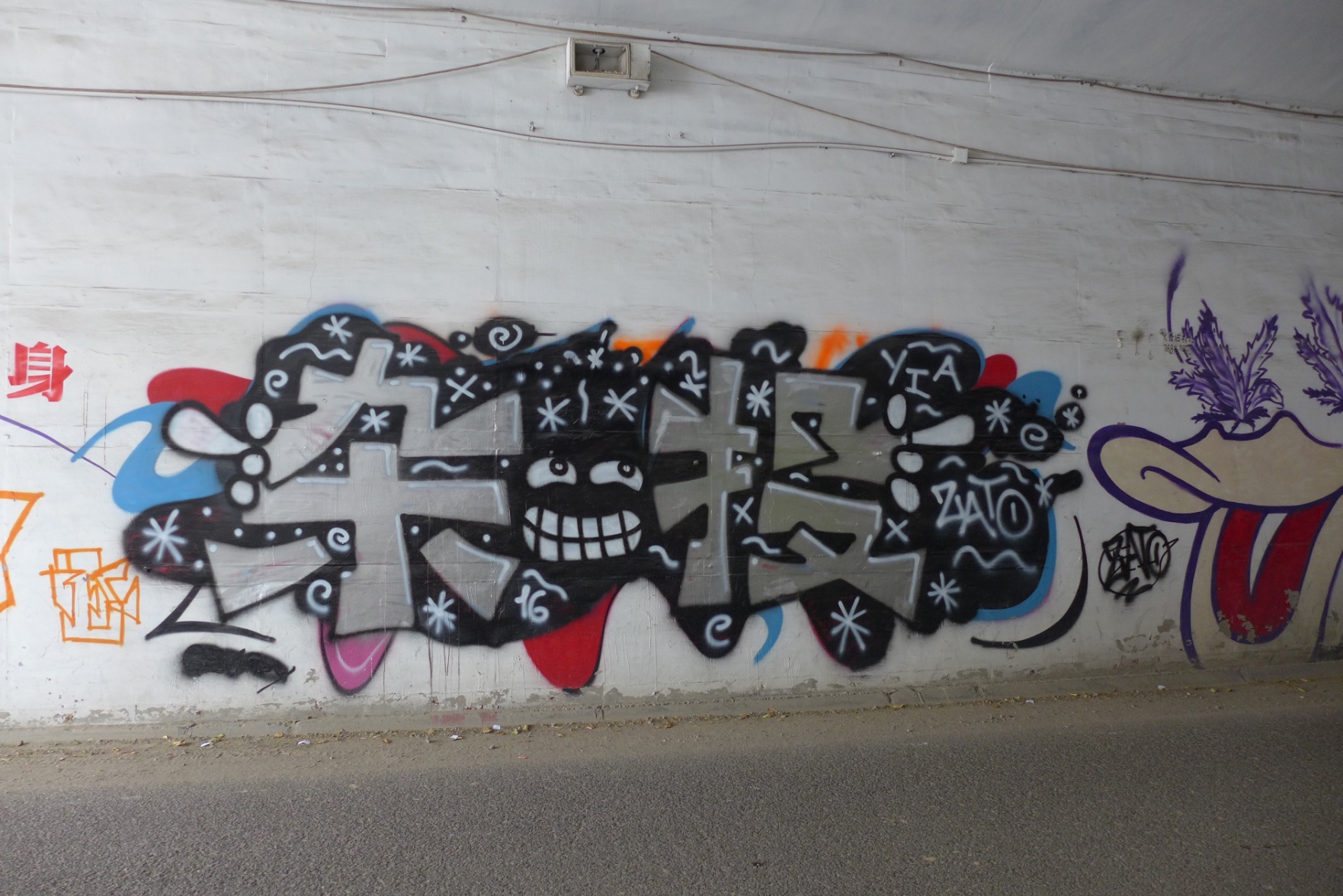 Zato is one of a few local graffiti artists to use Chinese characters rather than the Western alphabet.

I much prefer looking at graffiti that uses Chinese characters. I’ve been watching graffiti for 30 years, so to see pieces using Chinese characters is refreshing and exciting for me. And because I can’t read Chinese, it adds that air of mystery for me. It’s the same way I felt when I started seeing graffiti in Brighton and I didn’t know who was doing it.

Something else that local artist Zato talks about is how graffiti crews want to “conquer territory.” Is this hard to do in modern-day Beijing?
The graffiti scene in Beijing is not dying so to speak, but it has become increasingly difficult. The scene has always been small. The population of Beijing is over 20 million, and ever since there has been a graffiti scene in Beijing, there have perhaps only been about 100 graffiti artists at most. You go to any European city or American city, you’ll find scenes that have thousands of artists in even smaller places.

In 2014, authorities put up a plastic screen at the Badaling Great Wall as a designated area for graffiti, in part as a way to stop people from doing graffiti on the wall itself. Do these kinds of designated areas defeat the purpose of marking one's territory in graffiti?
I don’t think the screens at Badaling were specifically placed there in response to the ‘graffiti artists’ we’re talking about. I’ve seen similar screens in the watchtowers at the Mutianyu section of the wall and they’re covered in simple scrawls by tourists as if they were signing a visitor’s book. But there are areas in the city where the graffiti I’m talking about is tolerated. But yes, these areas do defeat the purpose to some extent. Much of the thrill of graffiti comes from doing it without permission.

Also, when you have these ‘safe’ designated areas, not just in Beijing but anywhere in the world, you have a lot of people coming along and trying to do graffiti just because it’s trendy. But they perhaps don’t really understand the true history of the culture and what it’s about. They might have a more commercial mindset. They might want to be a professional artist and ultimately make money from it. But graffiti is more about having fun. These kids in New York in the 1970s who were spray-painting their names on trains weren’t getting paid. They did it for fun. I think that’s important. When you start to try and turn it into a career, it’s not the same.

If people wanted to learn more about graffiti in Beijing, where could they go?
I haven’t been to Beijing since 2019 because of COVID restrictions, so I can’t really say where the best spots are at the moment.

The 798 Art District is a good starting point. You’ll see work by some of the city’s most active graffiti artists. Graffiti in 798 is tolerated. But not all of Beijing’s graffiti artists necessarily paint in these tolerated spots. I would say that discovering the graffiti scene in any city is more about walking around and coming upon graffiti by chance. Some graffiti might only last a couple of days. Graffiti is getting increasingly hard to track down.

The best way to gauge the health of a city’s graffiti scene is to go out onto the streets and just walk around to see where there is graffiti in public. Certainly do not rely on things like Instagram because someone could be painting something in their back garden and posting every day without putting in the real work of going across the city and doing graffiti in all these exciting new spots.

This interview has been edited for clarity and brevity. Liu Yuan Sheng and Tom Dartnell’s new book ‘Beijing Graffiti’ is available to purchase on Amazon.

[All images via Liu Yuan Sheng]