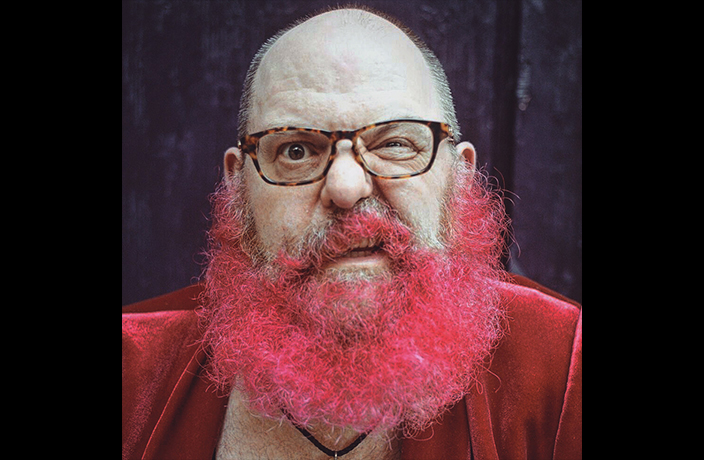 Grant-oh! Buchwald, The Pearl's Pappa-G, is an all-round good guy. A Shanghai mensch. And, as the main man behind entertainment at the converted Buddhist temple turned theater, burlesque and live music space, who better to ask about their most memorable nights ahead of Saturday's The Pearl 7th Anniversary, a night of burlesque dancers, aerial acts, guest singers and live music provided by rocking band the Red Stars? Nobody better. So over to Pappa-G we go... 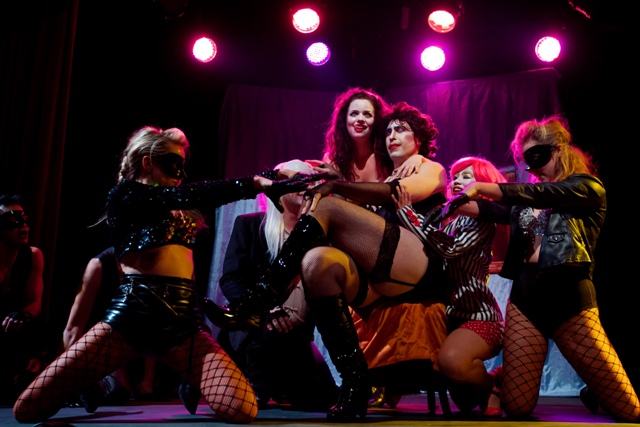 Rocky Horror will always have a special place in my heart and in the history of The Pearl. It was the first show that launched us seven years ago, with founding partners, Frank Bray and Glenn Thain with Drago Lazetich directing. Over the years it has evolved into a full Rocky Horror Drag Show, which I find more interesting because every year it keeps evolving. Key scenes and characters are there that everybody loves, but the artists – especially the local drag queens – all put in their own vision, their own passion, so every year is a completely unique experience. It’s just fantastic. 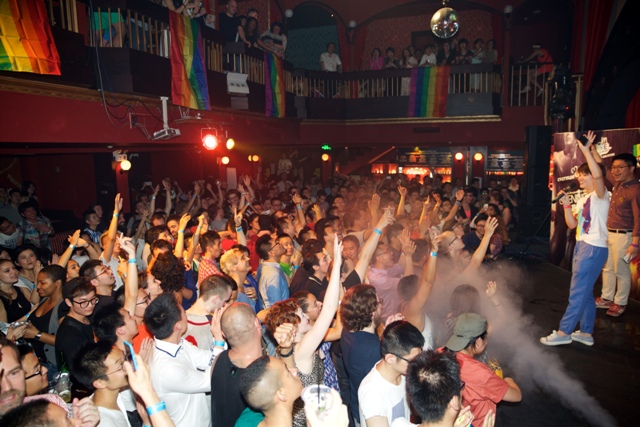 Pride events will always be something very special to my heart especially as I was their original photographer 13 years ago, and I’ve tried to support them ever since. At The Pearl we’ve hosted Pride's Got Talent shows that always have wild 'special' surprises and, of course, several of the infamous and massive official Pride opening and closing parties. They are always so much fun with such a free and loving atmosphere!

On a special note, one of the earlier Pride or drag events gave me a special moment I will never forget. After the show, the local drag queens were in tears, as it was the first time for them to perform to a mainly 'straight' crowd and, of course, our audience loved them and screamed so loud. They had no idea how much they would all be accepted and encouraged at The Pearl… as they should be everywhere. Big love from Pappa-G! 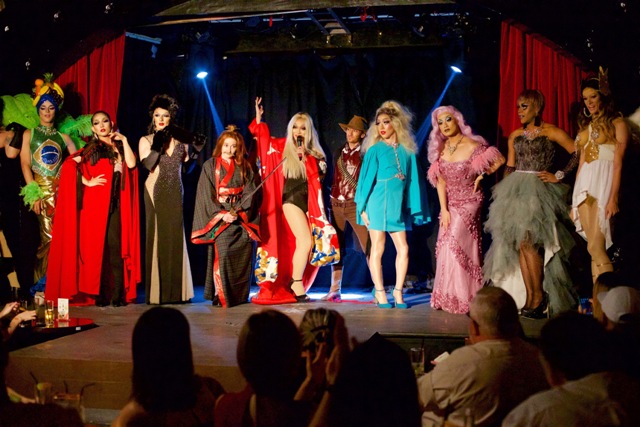 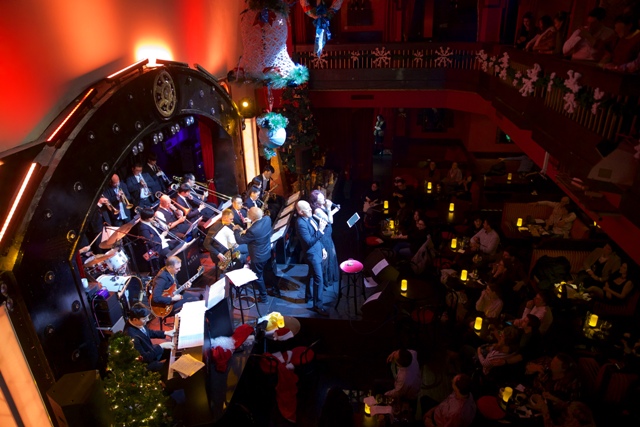 Christmas at The Pearl is incredible every year. First, we have our annual Christmas Market when we open up for families and all the kids. It's heartwarming times… or maybe that’s because of all the Gluwein I drink. We have plenty of family friendly entertainment – no tassled performances, hah!

Last year was also the beginning of a new tradition – Mrs. Claus' Christmas Buffet and Show! Our fun-loving in-house (but out of the closet) Drag Queen, Cocosanti, as Mrs. Claus hosts a family-friendly dinner party with fabulous guest performers joining and singing all the holiday classics while everyone feasts on Chef Baidas’ delicious spread.

Moulin Dreams was my first experience being involved in fully immersive theater at the Pearl and – wow! – what a show that was. To work with Brian Wang, Eric Paci, and the team they put together to get their vision on stage was unbelievable. Three simultaneous intertwined stories based on Moulin Rouge, Dream of the Red Chamber and 1930s Shanghai gangsters that utilized all three floors of The Pearl. It was just magnificent and I am still blown away when I think about it.

Luckily, we had the perfect venue, and all I had to do was provide the cabaret performances, which is easy with our Pearl Dream Team of performers. We had Hsien Ming doing aerial silks and a duo aerial cube with Sasha. Sasha and Vlad's stunning, passionate rendition of 'Roxanne' was just Wow! But the stars were really Brian and Eric's team of actors. I am so proud of what they did and happy to have been a part of it. 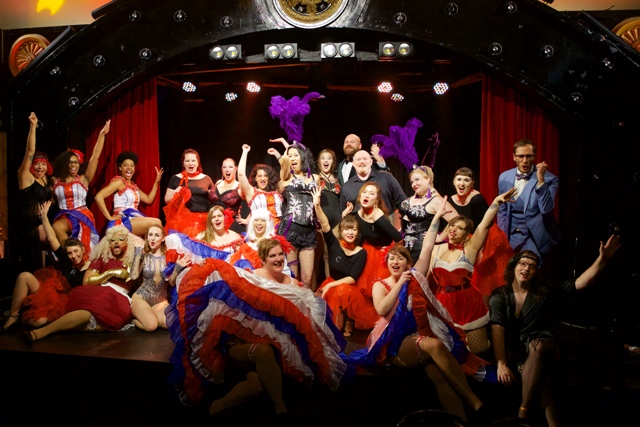 Though music has become my focus in the last couple years, burlesque and cabaret will always be truly dear to my heart. After all, if not for my involvement in Chinatown (for you newbies – you can look it up or buy the saucy books out there about those times), I guess I wouldn’t be part of The Pearl now. From the early days we’ve hosted so many great shows, working with Anna Furlaxis and Ennis, and then later with Dorian and so many others. It’s hard to pick just one as they were all so much fun. The female prison-themed show was great, as was the cosplay night with Tekken Warrior battles, our first ever butt tassles performance we know of in China.

Many of you know Shanghai drag king legend Dorian. On opening night one of my partners, Glenn, would always ask: "What's Dorian up to this time?" At that point I would go into panic. You never knew what was coming up; some prosthetic 'low hanging fruit' or Jesus walking around with the famous 'd**k in a box' routine, and then being 'serviced' while on the cross. Luckily it was pre-social media iPhone photos days. While I do miss the shocking creativity, at my age, the heart can do without the stress, as we certainly can't run those acts anymore.

I’m really excited and proud of Kara and Carrie. In the past few years they’ve taken the reins and launched The Silk Room School of Cabaret and Burlesque. Nothing excites me more than watching their students blossom over time, putting in the time in to conquer their fears of going on stage during their showcase performances. Every time they keep raising the bar. I’m also happy that they have moved more towards cabaret that is still sexy and saucy, but saves me from stress of the tassles and the local authorities (which I fully respect; I do everything within the confines of all laws and performance licenses... which seem to evolve at a never-ending pace).

The Dark Circus team always deserves an honorable mention too. Vova and his team started at The Pearl about three years ago, and his creativity is truly endless and always spectacular. 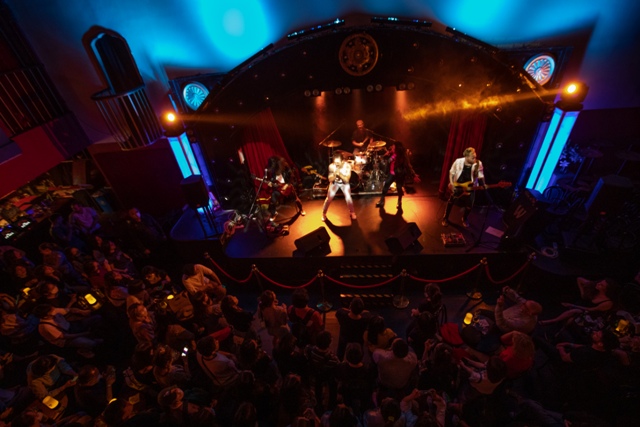 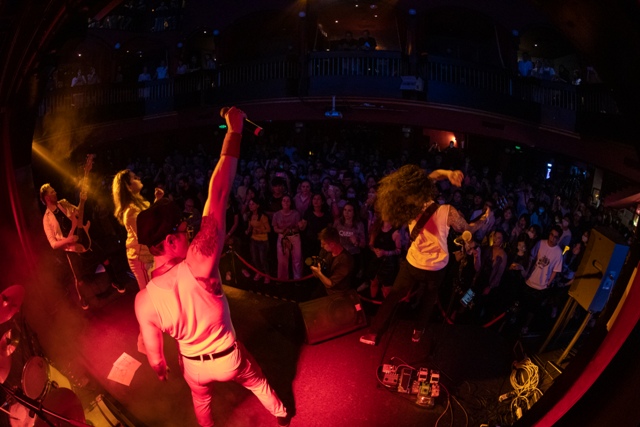 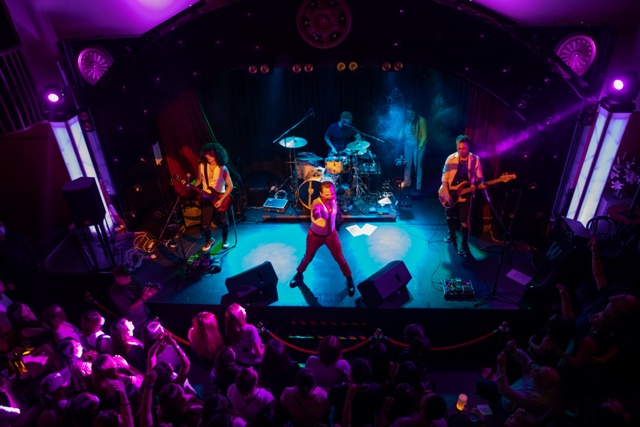 The Queen Tribute was our first big tribute concert back in 2014, I think. It was Raina’s last hurrah in China. She was one of the original Chinatown Dolls and then at Cotton Club for years. She put a star-studded show together. Last year, I challenged our house band Red Stars to do one, which ended up being perfect timing as the Bohemian Rhapsody film came out around the same time. It was not easy but, damn, did they deliver an amazing show with guests Chad and Rhian.

Due to COVID, we had to make some changes, and it's evolved into an even bigger show – and better hit this year – with our new 'Freddie' (I’m not giving away any secrets, but he's amazing). I've been to all 30+ performances, and it never gets boring. The greatest thrill is listening to 200+ young Chinese 20-30 year olds singing the lyrics word-for-word along with older laowai (like my age), sometimes drowning out the band. Queen's music is eternal. Speaking of eternal music, our ABBA Tribute is also back this month with new team members. 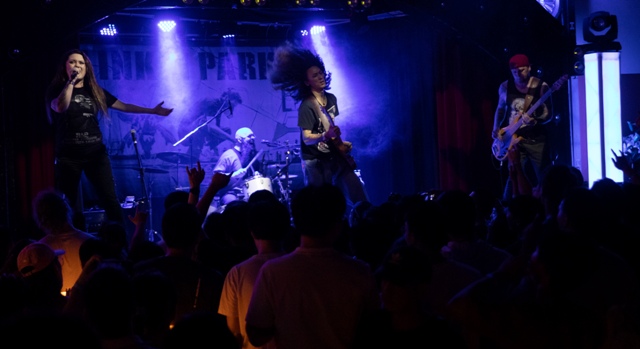 The Pearl's Red Stars band... wow! This group is truly amazing; in all my years I've yet to meet such hard-working, dedicated professionals, and they never disappoint me or our audiences. I’m so proud of them, especially because they've kept up with all my crazy demands over the past two years: with my red beard I can get all Viking on them from time to time.

As we are a tight family now, some ideas are from me, but more and more, the ideas for shows are from them and listening to what our customers want. (By the way, during COVID, as they finally had some down time, they started writing their own songs, so you can expect to hear some cool originals coming out here and there in shows).

Their favorite nights have got to be the Linkin Park-Nu Metal and 90s Rock shows. When they are doing Linkin Park with the stage risers to get above everyone and just scream! Hot damn! That passion, that energy, it's just infectious. Next thing you know… Chef Baidas, Owen, staff and I are out there moshing with the rest of the customers. Just can’t help it! I love it until the next morning, when this old man feels his age and gets a reality check… but it is always worth it!

... certainly go out to Dave Stone and Mark W for their awesome work on our AC/DC Monsters of Rock shows. We are also working on some new shows of Coldplay, Avril Lavigne-Pink, Led Zeppelin and Pink Floyd that were postponed as we lost artists due to COVID. Dave Stone is also our Ed Sheeran for our on-going series of sold out Adele-Ed Sheeran shows. Both Dave and Mark are also working on their original songs, so I’m really excited about hosting some future original music nights featuring the whole array of my Pearl Dream Team. We kept getting better with age and learning as we grow!

Shanghai’s house of burlesque, cabaret and live music is turning seven on Saturday night, and in proper birthday fashion the team is going the full mile with a night entailing all the revelry The Pearl is famous for. Bank on burlesque dances, aerial acts, guest singers, live music from resident band The Red Stars and more. Tickets are RMB150 and can be purchased right here or by scanning the QR code below: 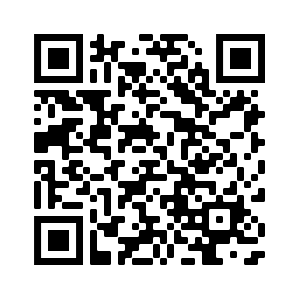 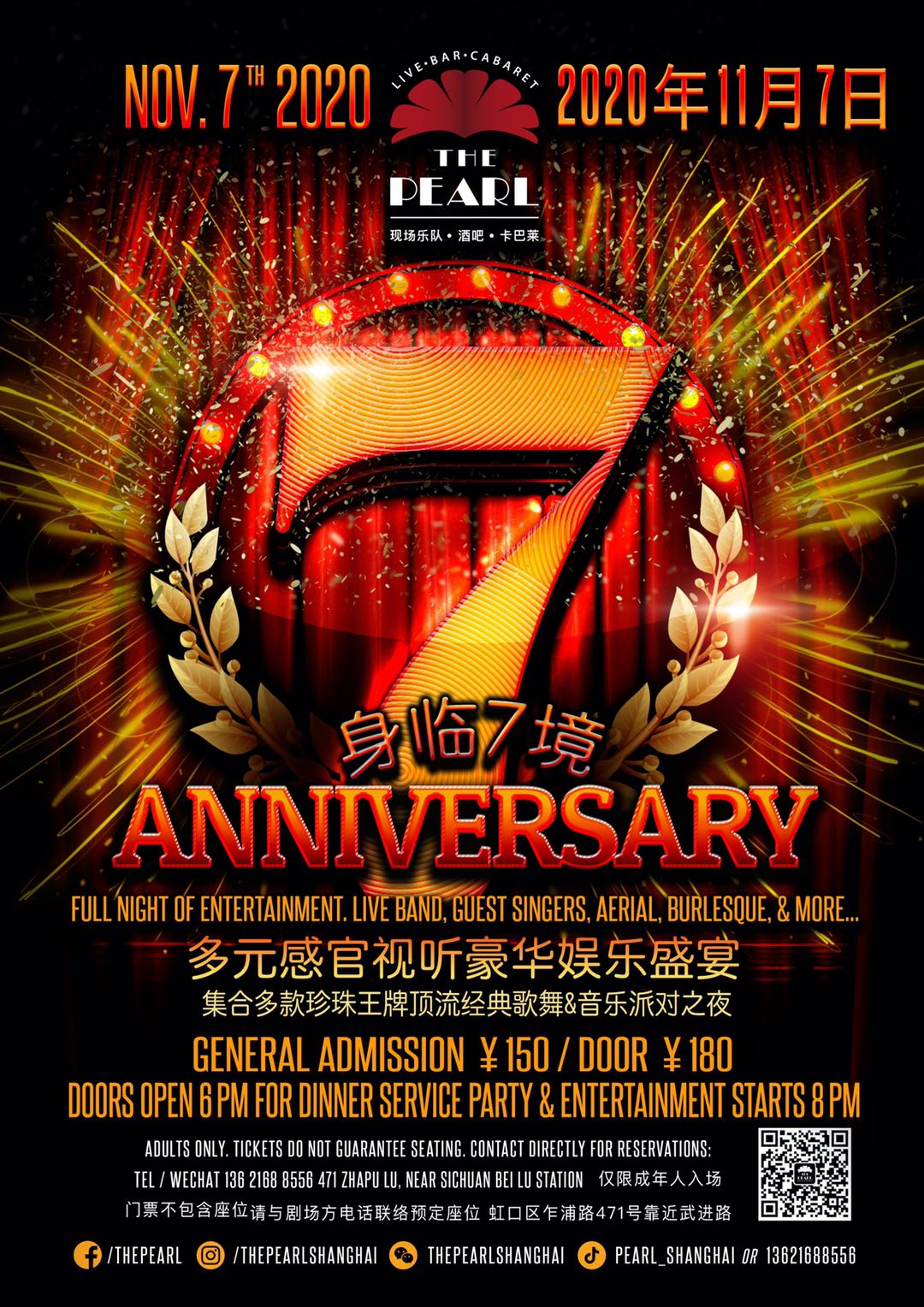 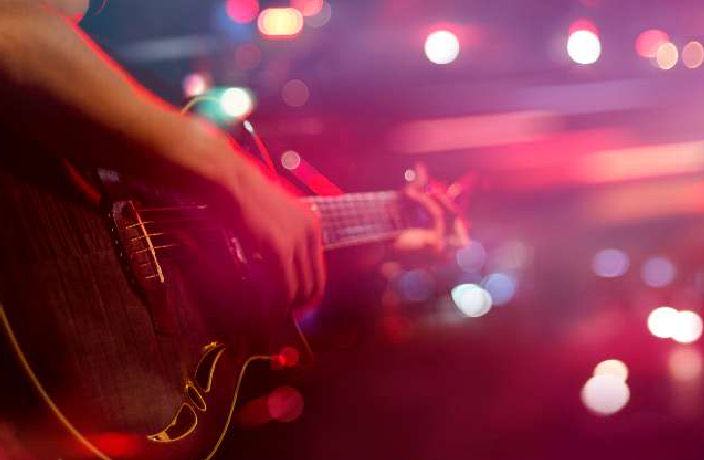