This story is Part II of our September 2020 cover story, giving readers a look back at what it was like to travel around China 30 years ago. To read Part I, click here. 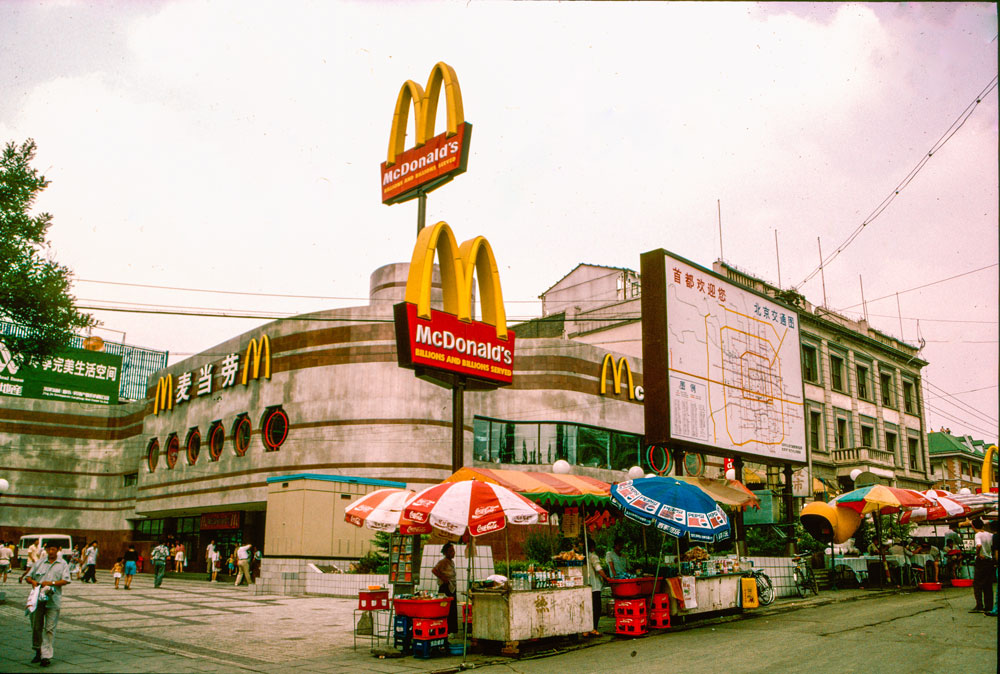 When McDonald’s opened on Wangfujing Street on April 23, 1992, it was the world’s largest. It had 700 seats, 29 cash registers, and according to the ledger, served over 40,000 orders on its first day. At that time, compared to normal everyday dining in Beijing, it was seen as a sort of luxury and a place to be seen visiting. It became irresistible for many young Chinese people and for families with children.

It was closed down in 1996 to make way for the high-end Oriental Plaza mall, but relocated 150 meters north, again on Wangfujing Street.

Notice the line of street food stalls – they were removed many years ago in a major landscaping project along Chang’an Avenue. 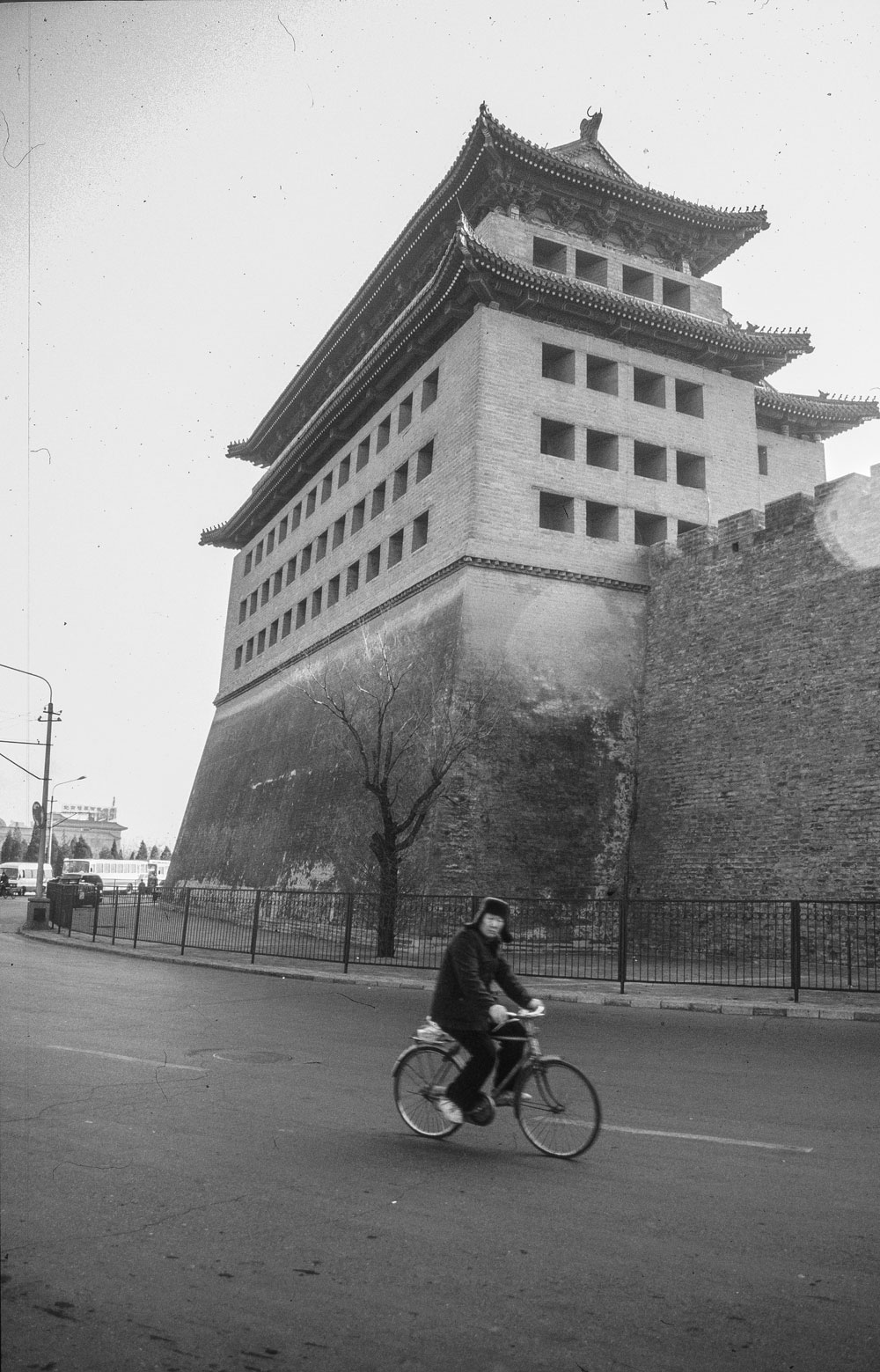 Historically, Beijing was a walled city. Grand watchtowers and gates stood at strategic points around the walls. Today, it is one of the few surviving gates of the strong Ming-era walls.

Deshengmen Gate was also known as ‘Victory Gate’ and controlled the route to and from Badaling Pass. It dates back to 1437 and was where the victorious armies would march back into Beijing after battle.

This was midwinter in Beijing, with the area around the gate very quiet except for this cyclist. 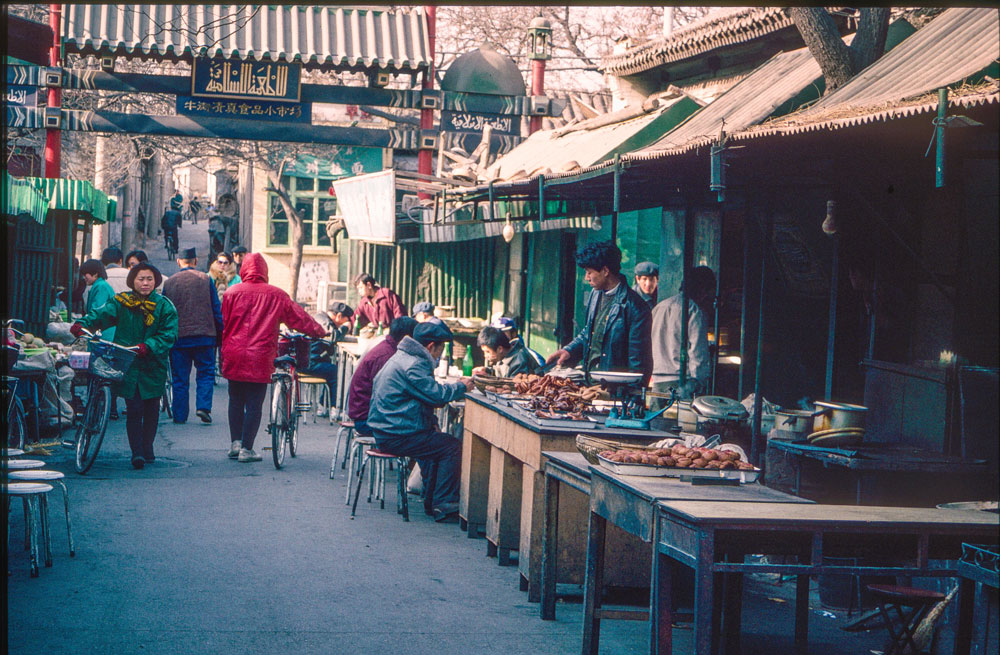 Around 1995, there were many outdoor snack stalls serving large helpings of grilled mutton and bowls of steaming noodles. It was a fascinating area to watch or take part in older, traditional Beijing customs.

This scene was close to Niujie Mosque. Today, the mosque remains and has been renovated, but the outdoor food stalls are long gone. 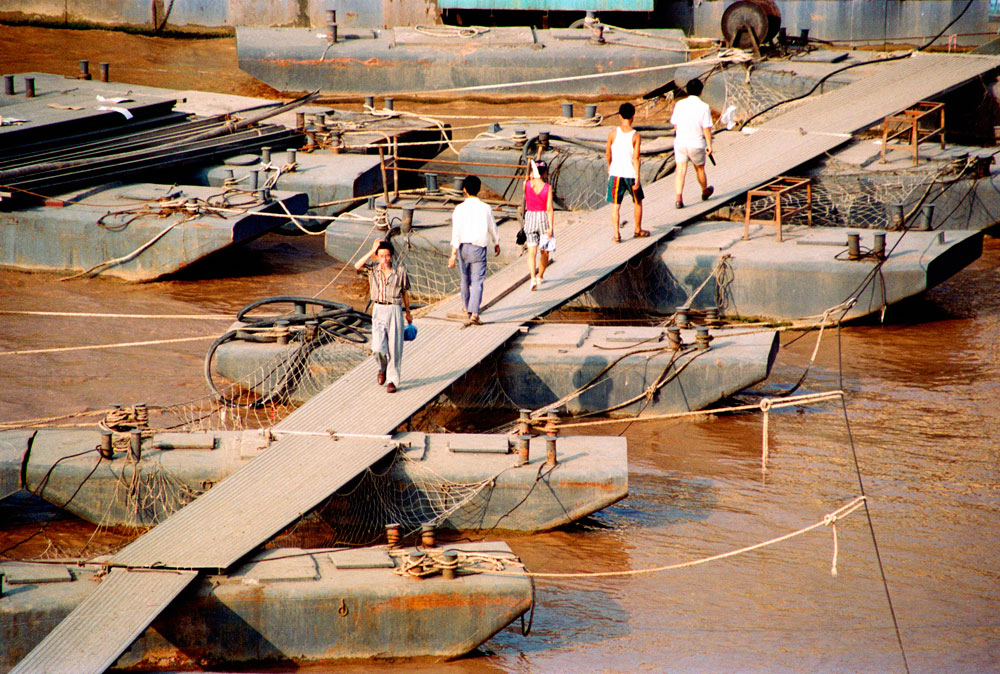 Today, water flow levels along the Yangtze (Changjiang) are steadier, with less seasonal variation due to the opening of the Three Gorges Dam in 2010. Previously, there could be considerable fluctuations in water levels, making the construction of landing stages or docks sometimes impossible.

In Chongqing, boats would be tied up at floating landing stages. These were connected to the shore by metal or wooden walkways stretched over pontoons facing up river.

After crossing, there would then be long flights of steps up to street level.

Chongqing is renowned for its summer heat, and climbing up would be exhausting! 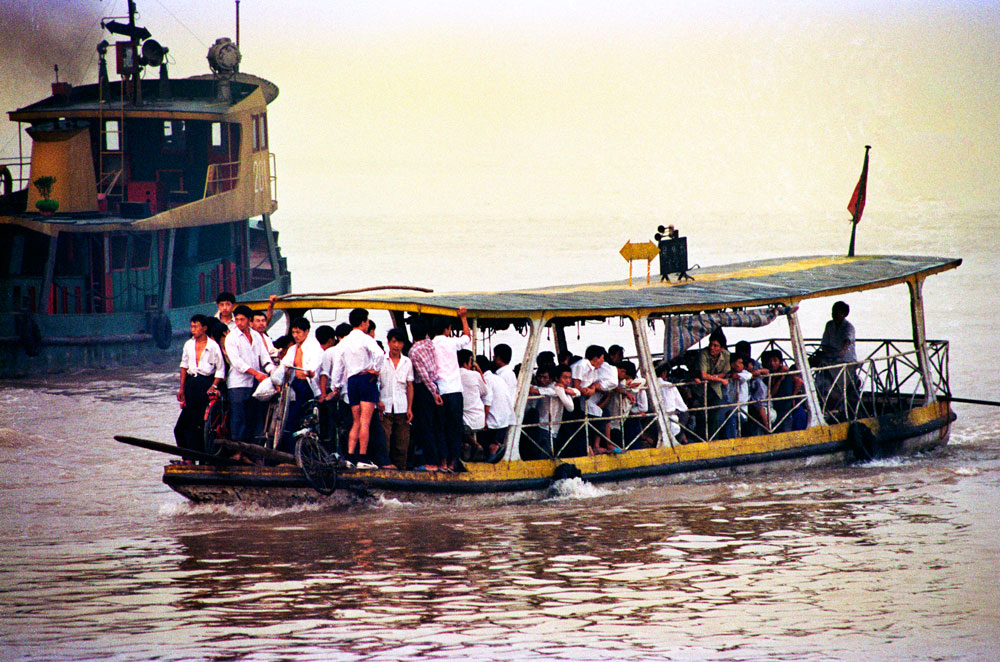 Leshan, south of Chengdu, is famed for its Dafo (Big Buddha) sandstone carving. I was on a boat preparing to depart for a two-day sail down the Min River (Minjiang) to Chongqing. Through the mist emerged this local ferry crowded with people, mostly wearing white shirts – common attire at that time.

In 1994, there were very few bridges across the major rivers, so ferries would be the only way. 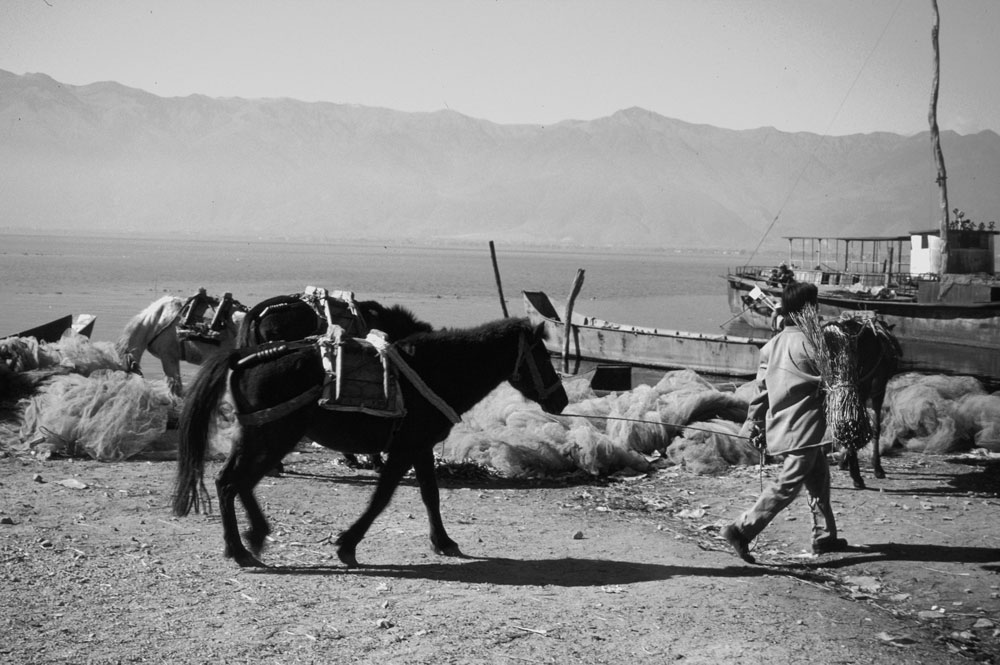 In Dali, I loved to have a relaxing stay close to Erhai Lake.

I traveled across by small boat to Wase, on the other shore – then much quieter than Dali. Today, the expressway and railway run close to the town.

Wase was famed for its weekly outdoor markets where most people wore ethnic costumes such as Bai and Naxi. Packhorses were commonly used.

Simple sailboats carried goods across the lake. These horses were being led down to the harbor where boats were being unloaded. 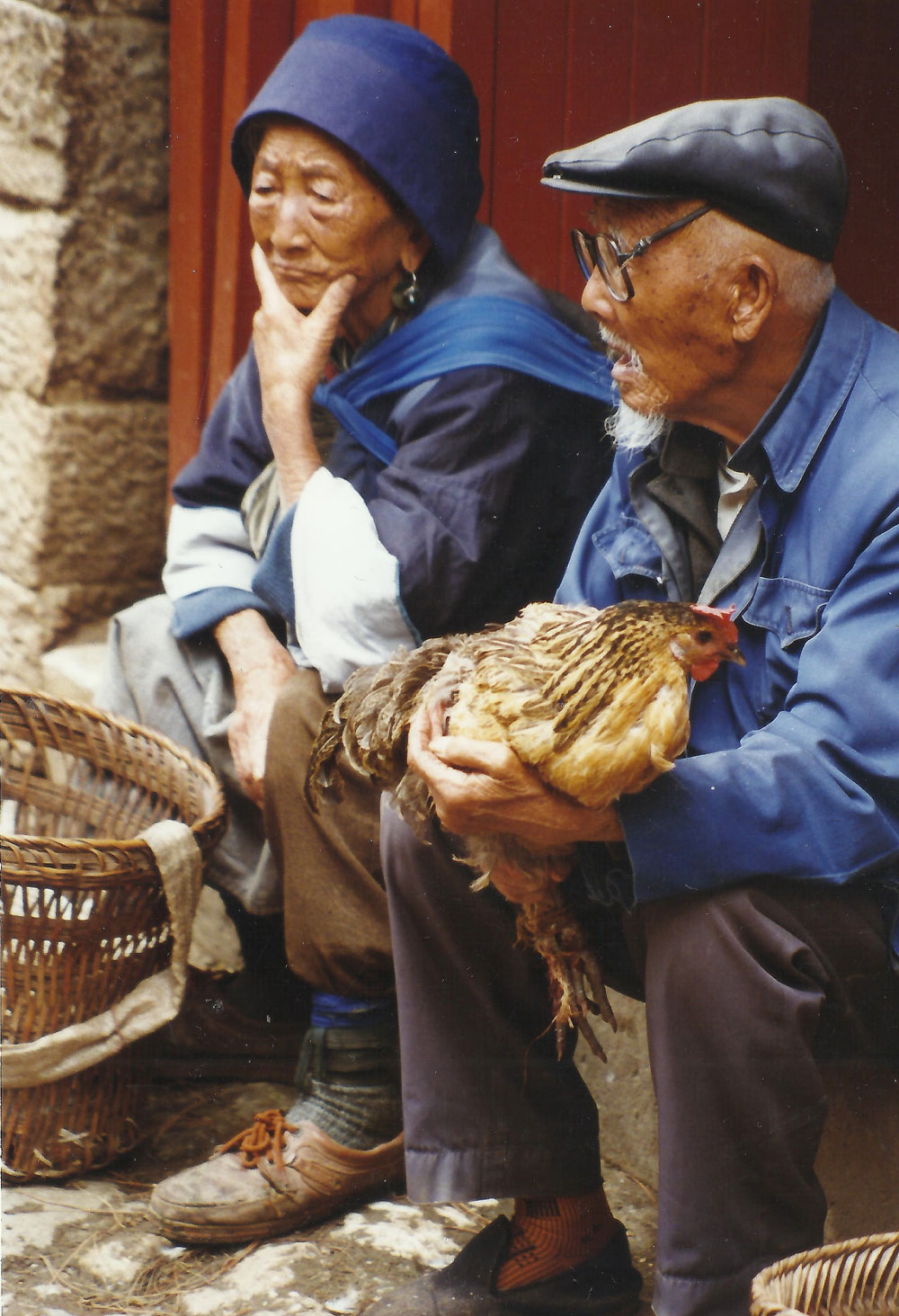 Lijiang was a remote town high amidst the mountains on the ‘tea horse trail’ from Kunming up to Lhasa. Lijiang in 1995 was mostly pre-tourism then, and streets in the older area of the city bustled with everyday life. Most people were Naxi, wearing their traditional dark blue clothing. Bai and Yi were also present around the market areas.

This couple sat patiently alongside a busy alley hoping for a sale. 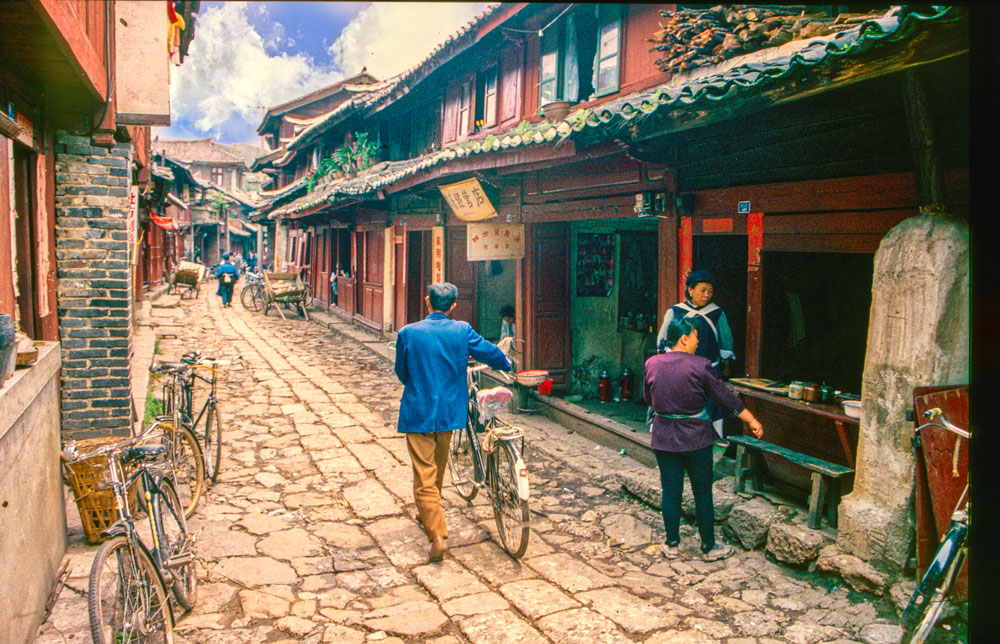 In 1995, Lijiang was a traveler’s dream. It felt in a time warp compared to other parts of China, particularly the eastern coast.

Streets were more like narrow, stone-paved lanes. Buildings were two floors with red wooden facades that housed shops and restaurants on the ground floor.

It was amazing simply walking around, or just sitting at a food stall and watch the scenes – yet I knew, in my mind, eventually it would change.

In July 1995, it was a lengthy bus journey, on older buses and narrow roads up from Kunming. By early August 1995, an airport opened – three flights weekly to and from Kunming. Today, thousands of tourists travel to Lijiang by air and by rail from all over China. 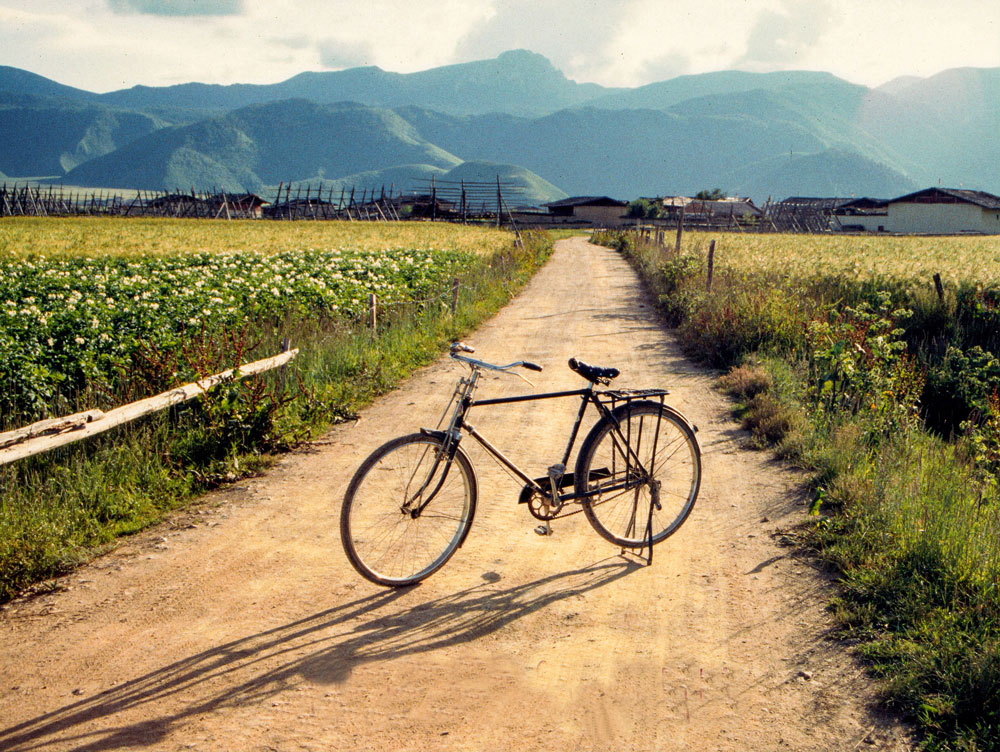 Zhongdian (today known as Shangri-la) is on a high plateau on the road up to Tibet. In 1995, the areas had only recently been opened up for western travelers. Access to the plateau was by bus from the valley of the Jinshajiang (Yangtze) - I traveled from Lijiang.

It was an area of grasslands, famed for its flora and areas of grain and corn cultivation. Villages of whitewashed adobe buildings were scattered across the grasslands.

Another attraction, Napa Hai, a shallow lake around which sheep, cattle and yaks grazed.

The best way to explore was by bicycle – hired from the guesthouses and hostels in town.

Cycles were the heavy ‘Flying Pigeon’ varieties with no gears – had to be pushed uphill followed by fast speeds downhill on the empty, gravel-surfaced roads. 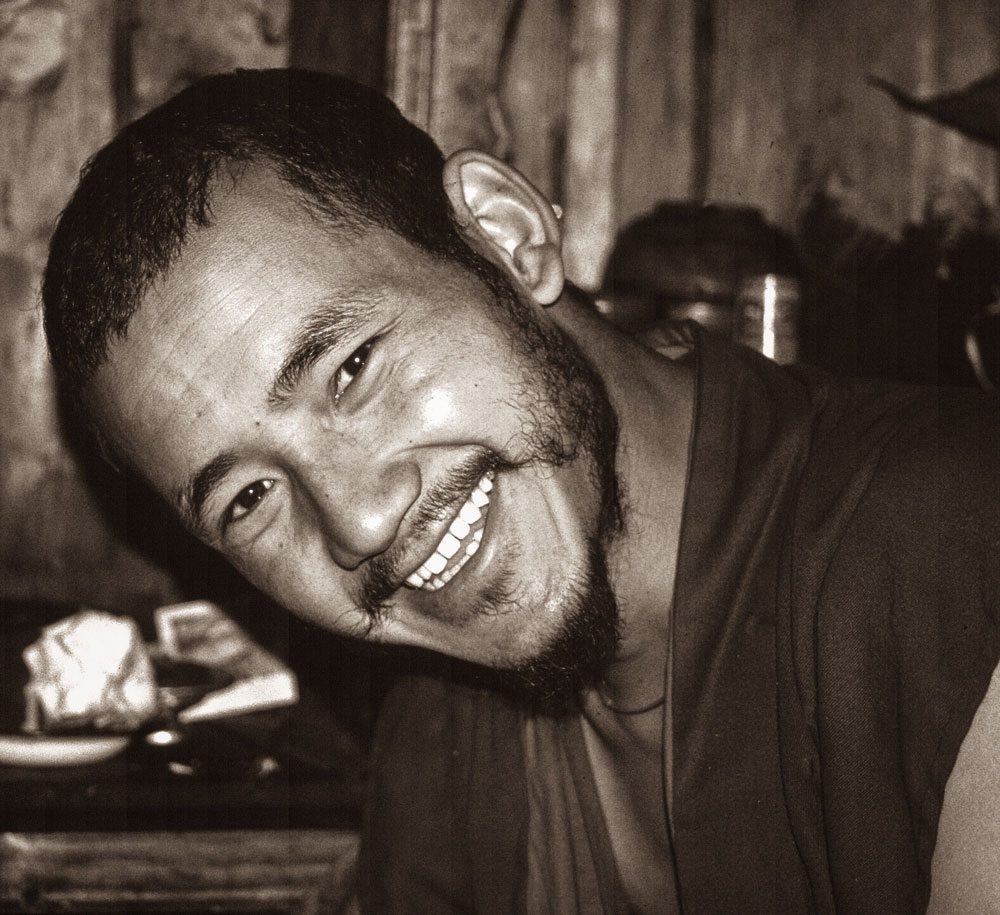 The monastery, 5 kilometers from town, is of the Gelukpa Yellow Hat sect of Tibetan Buddhism, dating back to 1679. It’s the largest such monastery in Yunnan. Today it is a major tourist attraction.

In 1995, I walked out of town approaching the monastery. At the time, there was no admission charge, so I just walked right in. Some monks saw me and invited me in for milk butter tea in their dormitory. The monk in the photo offered to show me around the buildings and grounds. 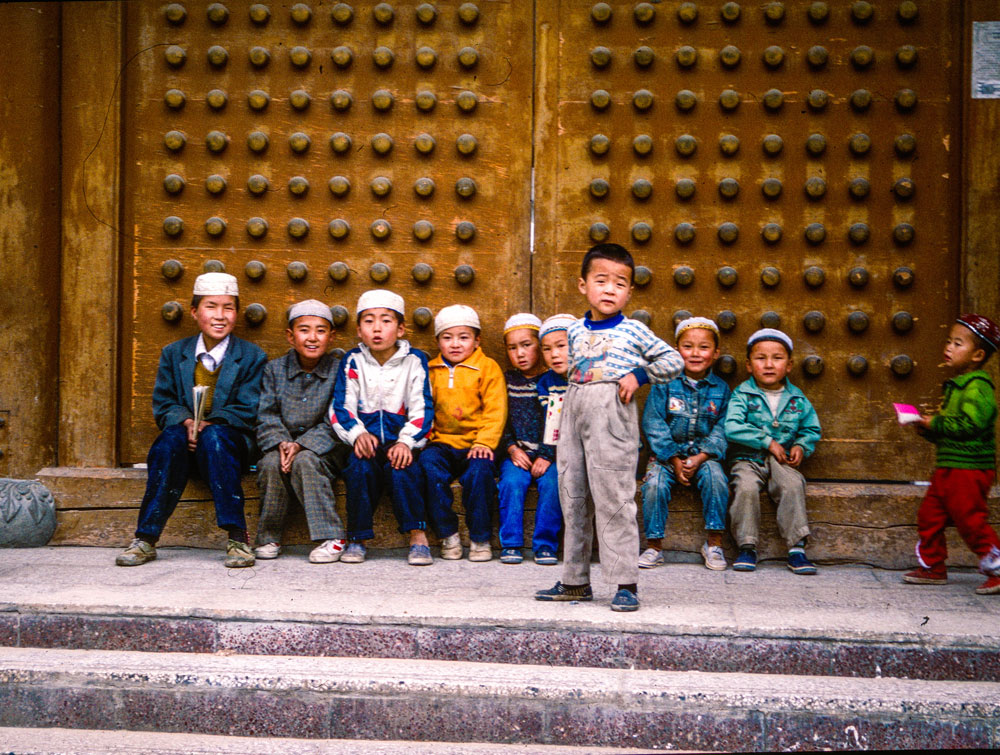 This was one of those moments in travel! I was traveling by road up from Lanzhou to Xiahe (Labrang Monastery) and stopped for lunch in Linxia, a predominantly Muslim city. Sitting in the car, I looked in fascination at the street scenes. It was a very bustling place with several outdoor markets. Thankfully, we were moving slowly and I had the window open. Suddenly, sitting outside this large wooden, traditional doorway, we came across these young boys wearing traditional circular skullcaps, except the one standing. They saw me, all looking with amused curiosity. No time to try and set the camera, I fired off this shot, which amazingly came out fine.

It was their expressions and the way they sat, in a line almost sloping according to their height. For me, a magical moment in travel.

Blast from the Past Cover Story Photography China Travel 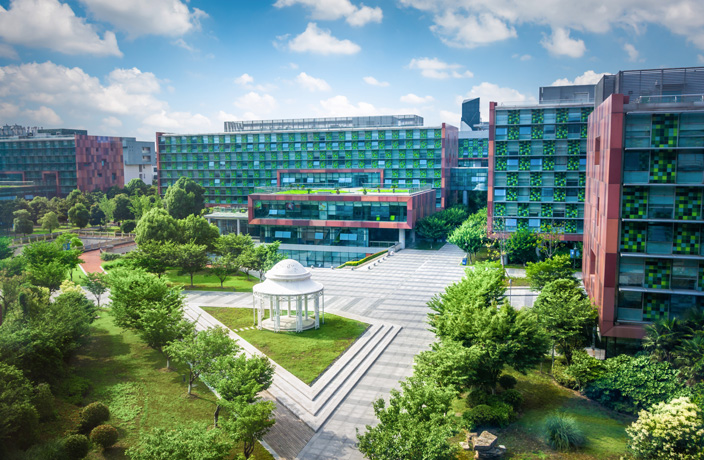