Poised to be one of the biggest and baddest drag shows the city has ever seen, the second annual Extravaganza (tickets here), arrives this Saturday at The Pearl with performances from Shanghai's fiercest kings and queens.

One of the headlining acts is Dorian T. Fisk, a drag king whose hypermasculine persona has manifested onstage as a swaggering rock star, a beefcake construction worker and a glammed-up vampire. "Dorian is essentially a mishmash of long-haired guys in rock bands I liked in the '80s with a smattering of the vampires in The Lost Boys and Johnny Depp," he tells us.

Dorian is also a founder of DKNSTRKT, a genderfluid collective fostering diversity in the local drag community. We spoke with the drag artist this week to find out what he's been up to and what to expect at the "veritable kaleidoscope of gender-fuckery" that is Drag Extravaganza II: Tucked and Reloaded. You’d been performing as Dorian T. Fisk for some time before founding DKNSTRKT — what inspired you to take on more of a leadership role in the community in 2018?
Last year, several of the local drag scene's most loved performers all left China, including Ennis F. W, my drag dad. Ennis and I had pretty much been it when it came to the drag king population at that time. So I certainly felt something needed to be done to boost our numbers.

Round about that same time, the annual drag competition hosted by ShanghaiLGBT was happening, and after my performance, I was approached by a Chinese university student who told me that they had never seen a drag king before. In fact before that night, they didn't even know women "could do drag," and confided in me that they felt inspired because they struggled with their gender identity and often felt they had a masculine side that needed expressing. After that, I approached one of the more established local Chinese drag queens, Fantasia Valentina, to see if they might be up for collaborating somehow. We discovered that we saw eye to eye on several things: that gender is fluid (ie. the notion that someone's gender should be limited to either "male" or "female" is not only unnecessary and boring, but for many people, it just feels wrong), drag is something anyone can do (regardless of gender identity or sexual orientation), and the city needed more opportunities for people to experiment with drag (ie. those struggling with their gender identity or just wanting to express another side of themselves).

So we spawned DKNSTKRT ("deconstruct") as a way to nurture a homegrown, more diverse and inclusive local drag scene. We launched in January. Since then, together with support from venues such as Daliah, Vspot and Fitspace and help from local drag artists, we have hosted drag makeovers, free drag workshops and are currently co-producing the biggest and most diverse drag show Shanghai has ever seen. 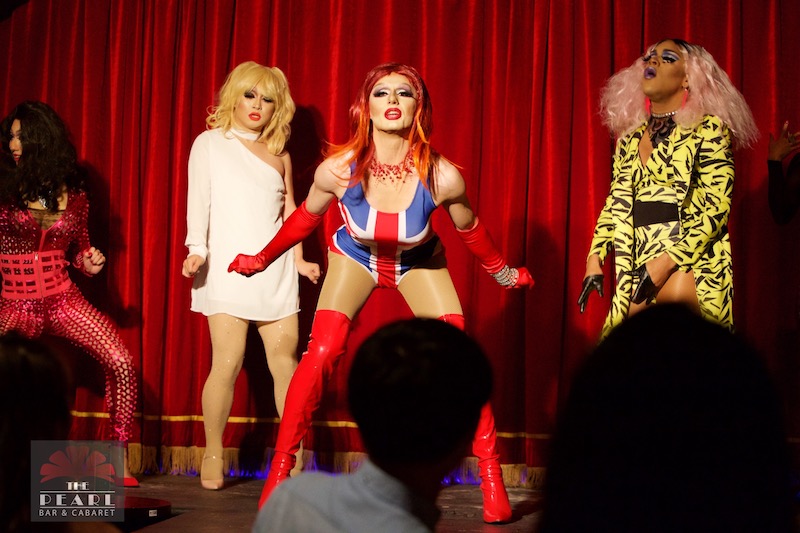 We love DKNSTRKT’s message of drag for all. Why do you think it’s important to encourage women to perform as drag kings, as well as to generally blur the binary between kings and queens?
Well, apart from the selfish motivation of wanting to be in a boy band, I just think it’s important to be inclusive, and to create awareness about how drag is multi-faceted. Drag kings (insofar as that definition means cis women performing various interpretations of masculinity for public entertainment) have been around for at least a hundred years, and not only on stages in the West. They’ve been part of Japanese and Chinese performing arts culture, too.

“There are people of all genders and sexual orientations expressing themselves through this art form today.”

Nowadays, a drag king (or queen) isn’t so narrowly defined. Anyone performing masculinity can be referred to as a drag king. It doesn’t matter what genitals they happen to have. There are women performing as drag queens, as well as drag kings. There are people of all genders and sexual orientations expressing themselves through this art form today. There are even “drag things.” There’s a veritable kaleidoscope of gender-fuckery out there to enjoy! 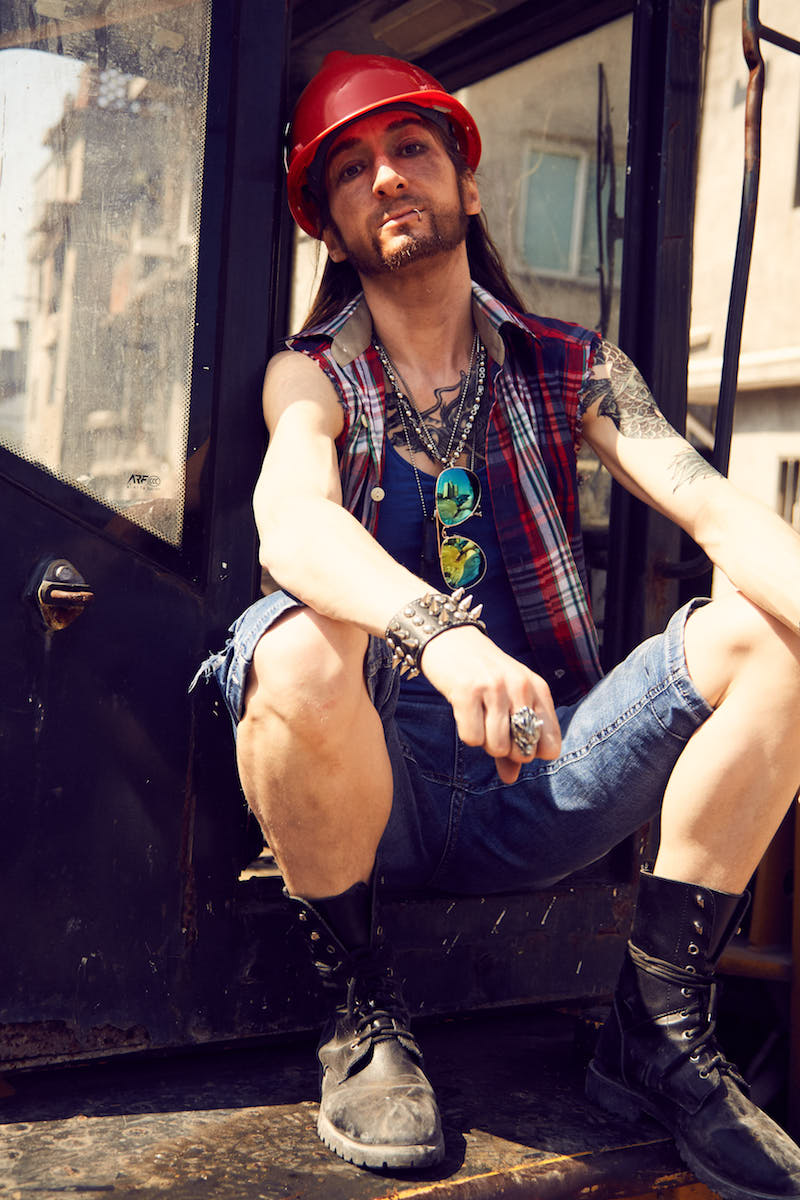 Many of Dorian’s looks and performances are hypermasculine, from construction workers to cowboys. How did you first develop this persona?
Bahaha, yeah! Dorian is certainly a concentrated dose of hypermasculinity wrapped up in different packaging. He also has evolved since I started performing almost 2 years ago.

He first appeared when I was stage managing for Shanghai Pride’s 2016 Talent Show at the Pearl. I realized early on that I have way too much hair to pile under a wig, so Dorian is essentially a mishmash of long-haired guys in rock bands I liked in the '80s with a smattering of the vampires in The Lost Boys and Johnny Depp. With his youngest fan after a drag visibility flashmob. Photo by Alejandro Scott.

Where do you find inspiration when you’re planning a new performance for Dorian?
Sometimes the show has a theme, so I start from there, but more often, my inspiration is in the form of a particular song. Sometimes even a great item of clothing might be the catalyst to an entire act concept (I have an act where he wears a kilt, and let's just say, it’s all about what’s under it by the end of that one). I’ve taken Dorian on his own journey of self-discovery, as anyone who saw last year’s Extravaganza might recall. Since fostering gender diversity is the main goal of DKNSTRKT, rather than a focus on performing, how do your workshops address that?
The workshops are there for people to learn, experiment and play in a way that is fun and non-judgmental. They are open to people of any gender. We are very clear about that.

DKNSTRKT doesn’t host contests. There’s no agenda to create "Shanghai’s Next Drag Superstar." If and when the performance opportunities do arise, though, we put that info out there. We dangle a carrot, and people who might be interested in developing themselves as a drag performer can opt-in if they want to, but there's no obligation to do so.

“I sought advice from my drag dad, Ennis F. W., about how to spawn some drag babies so I wouldn’t be so lonely.”

Tell us about the boi band workshop that led to the Dorian & the Douchecopters' performance at Ladyfest 2018. Will we be seeing them perform again anytime soon?
This workshop came about after I sought advice from my drag dad, Ennis F. W. before they left Shanghai, about how to spawn some drag babies so I wouldn’t be so lonely. Their advice was to remove as many barriers as possible and to do something less intimidating, like a group act, rather than try to develop soloists right away. So I made the boi band workshop free of charge, designed it so it covered all the basic elements of drag kinging and how to create a hypermasculine male illusion, and taught everyone who came that day the choreography that was going to be part of the act. I offered everyone the chance to perform with me 2 weeks later if they wanted to. I was actually really surprised that the signup rate was 50 percent.

The Douchecopters smashed their debut. It can’t be denied. I was so proud of them. That night, the audience, and the atmosphere couldn't have been better. I am very happy to say that we will be performing once again on Saturday. 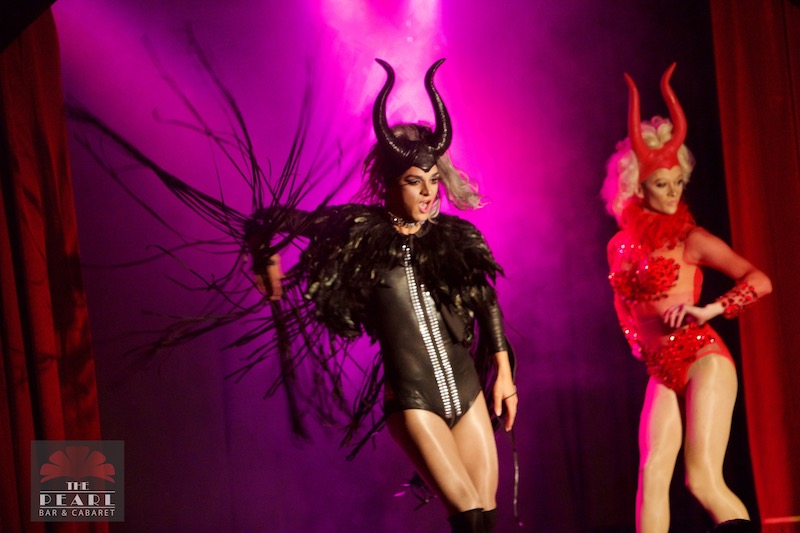 What can audiences expect at Drag Extravaganza II: Tucked and Reloaded?
This is the biggest drag show this city has ever witnessed, and I guarantee that you won’t see all of us on stage together ever again – this is a snapshot of the incredible talent and diversity within the Shanghai drag scene at the moment. We come from all over the world, we sing, we dance, some of us even fly. So come and celebrate this moment in time with us.

“We come from all over the world. We sing, we dance, and some of us even fly.”

What was it like taking part in the documentary that Matthew Baren filmed at the Extravaganza last year?
It was a lot of fun to have them around, backstage, at rehearsal, capturing the work and the fun that goes into putting on a big drag show. I’m very happy to have had the chance to be part of it. Last year's Extravaganza show was groundbreaking. Its success paved the way for the show this Saturday. 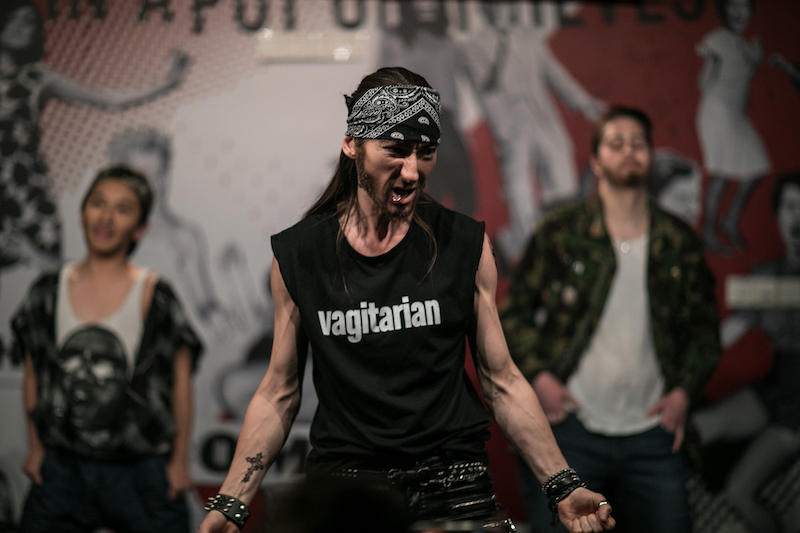 The Douchecopters at Ladyfest. Photo by Alejandro Scott.

What are your longterm goals for DKNSTRKT?
Oh, I’d love for DKNSTRKT to continue to thrive and serve as a platform to promote freedom of self-expression, love and acceptance in the wider community, and for it to play a part in growing a more diverse local drag scene.

For us to continue with regular free workshops and performance opportunities, however, we will need support from the community, such as spaces to hold our events, and for audiences to come see the shows, so that fabulous venues like The Pearl continue to put up with our shenanigans! .