Heavy weather in the capital of Yunnan Province this weekend caused major delays across the board for outbound flights from Kunming Changshui International Airport.

Stuck on board their Beijing-bound flight for hours, one tour guide and two other passengers on board MU2036 did what you've always wanted to in these situations but never dared to: they opened not one, not two, but three emergency exits on the aircraft and escaped down to the taxiway in scenes redolent of the incident last month when a passenger in Changsha busted open the overwing exit to "get a breath of fresh air." 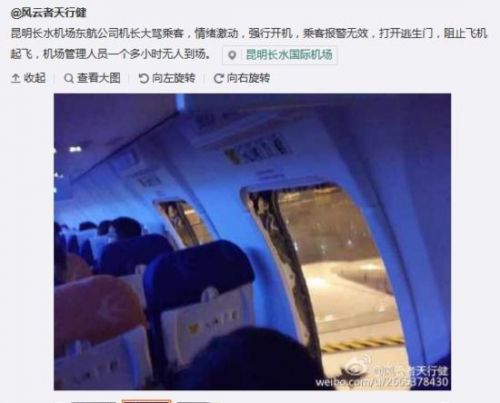 The China Eastern Airlines flight was scheduled to board at 8:45pm but didn't touch down from Dhaka until 9:20pm, after which rain and snow meant that boarding for the Kunming-Beijing leg of the journey didn't begin until midnight.

The 153 passengers finished boarding by 1am and the aircraft then had to queue up for de-icing, which finally began at 3:45am. During the de-icing process, air conditioning on board was stopped for half an hour in order to prevent the chemicals from affecting passengers, who then began to complain about the lack of ventilation.

Disgruntled passengers demanded that the pilot come out to explain himself but after the co-pilot appeared to answer passengers' question a struggle broke out between passengers and cabin crew which resulted in the Beijing-based tour guide, surnamed Li, encouraging another passenger, surnamed Zhou,  to pry open the emergency exits and alight to the maneuvering area of the airport. 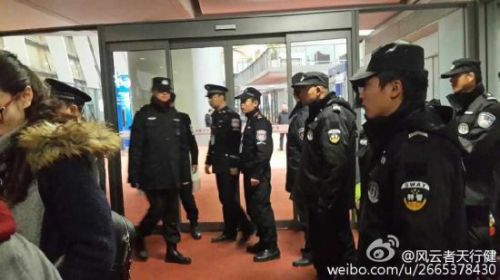 Their taste of sweet freedom was short-lived, however, after police arrived on the scene shortly thereafter and detained the escapees, holding a total of 25 passengers over the great escape and the confrontation on board that preceded it. Instead of waiting on the plane and getting to their destination later that morning, they're now still waiting in a police station for over two weeks as part of a 15-day administrative detention period. WATCH: Hero bus driver subdues knifeman on board and delivers passengers to safety

One ballsy bus driver in Zhejiang...