On June 7 2014, The Shanghai Puxi Lions FC clinched the Premier League Championship with a 6-0 win over Japan. DIB FC held to a 3-3 draw versus ReUnited. Oranje beat Metro 2-0. In the First Division the Shanghai Vikings FC all but secured Premier League promotion with 6-0 win over Cosmos. In 4 matches 18 goals were scored. 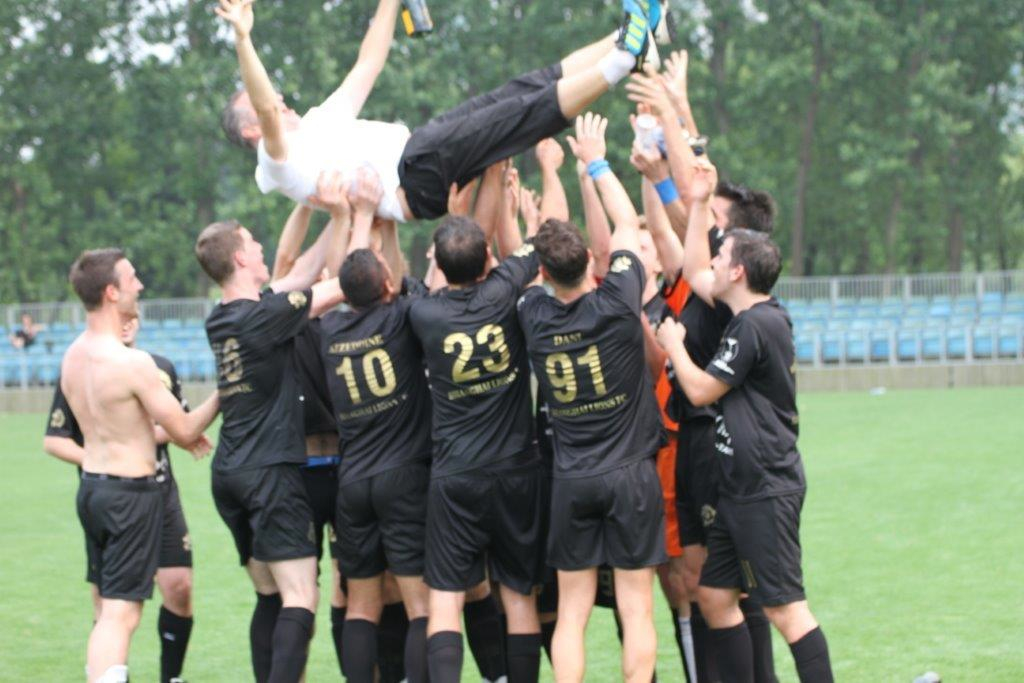 In the Premier League, the Shanghai Puxi Lions FC were up against Shanghai Japan FC in Century Park. It was D-Day for the Lions as it was championship match for them. A win would seal it but there was more at stake as they could end the season undefeated for the first time and in doing so tying the Shooters record. From the kick-off the Lions looked sharp and hungry, creating several opportunities but failed to find the net. However, when the game advanced it became clear that they would not give many opportunities to Japan either. Daniel Isaacs broke the deadlock on a fast counter to open the score taking a 1-0 Lions lead. Soon after that Allan Mendel doubled the score to 2-0 then Romain Haution made it 3-0 at halftime. 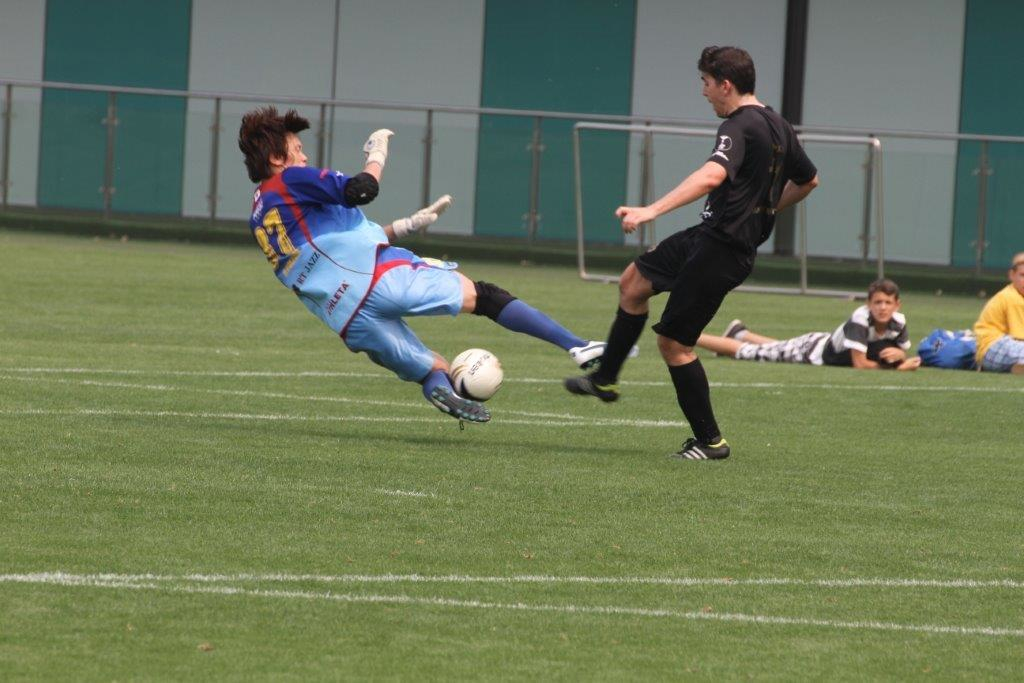 Despite the sizzling heat and a 3-0 lead the Lions didn't hold back and kept pushing for more goals. It’s the Lions trademark to always continue to play football and try for more until the final whistle. In the 2nd half they scored three more goals via Azzeddine Takouloufa, Matthieu Witkowski and another goal from Daniel Isaacs for a final 6-0 score. Man of the match honors went to Romain Haution. It was the Lions second consecutive Premier League Championship with an incredible undefeated run where they scored 81 goals and only conceded 14. Congratulations to Freek Boelen’s Lions. Freek: “Next season we are going for the treble and start another football dynasty.” All in all a great result with a great run. Cheers boys! Shentong Metro FC locked horns with FC Oranje. With two games to play eighth ranked Metro could still trade places with seventh ranked Japan. For the Orangemen it was important to cement their grip on the middle and try to get three points from this encounter. The match started with plenty of sunshine at the Songjiang Sports Center. The pace of the game in the opening phase was a bit slow and took place mostly on the Metro half. Oranje created several bankable chances but the end pass was lacking. Metro kept playing the counter trying to reach their lone striker via their attacking midfielder. From one such attack, their striker got played free for a 1v1 with the Dutch keeper but Friso Klok saved the Metro effort well. A few moments later Metro fired a diagonal low shot from the right side that edged towards the far post but again the outstretched hands of the orange keeper denied the effort. 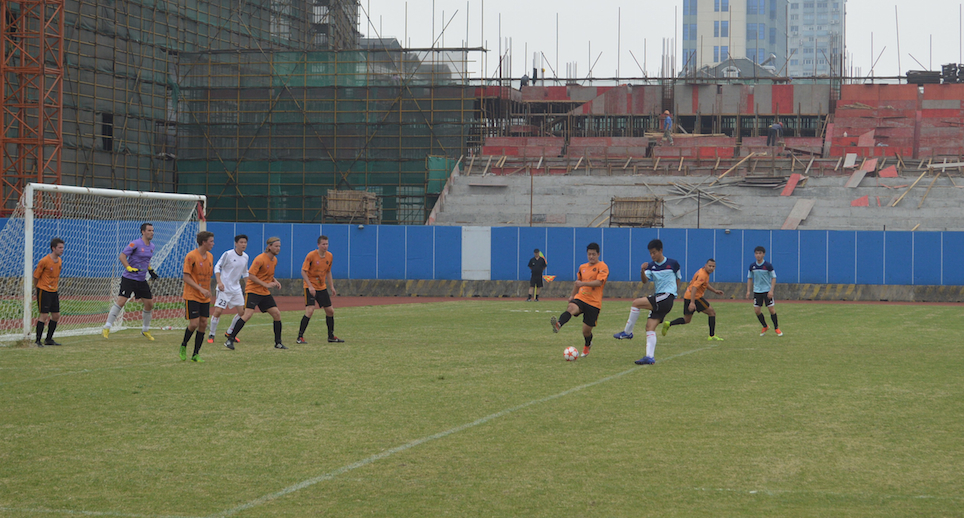 After about 20mins from another fluid orange attack Donny Sijbrands received the ball at about 20 meters out and fired a shot at goal. The ball was brought back into play and landed at the feet of Joey Bansberg on the left. He wasted no time and fired a curve ball from the edge of the box that sailed in the top right corner for a 0-1 FC Oranje lead. FC Oranje had several chances to double the score in the 1st half but failed to do so. Metro had a few more efforts at goal but were unable to negotiate the solid Dutch defense and the half ended 0-1.

In the 2nd half Metro increased pressure and put more men forward to try and force the equalizer. That left Oranje with more space upfront but they did not make good use of that. Metro created several fasts pace attacks threatening the orange goal. The roles were a bit reversed now with Metro attacking while the Orangemen held back trying to defend their lead and playing on the counter. From one such attack the ball ended up at Jorn Brouwer on the left who dribbled all the way to the Metro goal but he was unable to squeeze the ball in from a tight angle. By that time Metro controlled the midfield and when captain Wei Minpei got the ball he moved up to the box, noticed the goalie a bit of his line and attempted a lob that nearly went in but landed on the cross bar. Moments later Metro played a combination through the middle for their striker to try another 1v1 with the goalie. The striker got fouled leaving the referee no choice but point at the spot. The ensuing penalty was read well by in-form Klok picking the correct angle to stop it (below). In the last 10mins of the match Oranje played better again and when Jorn Brouwer beat the offside trap on the right he moved to the back line then placed the ball to the free standing Alex Kruis who just had the keeper to beat and that’s what he did doubling the score to 0-2. It proved to be the last action the match, 0-2 it stayed and three points in the bag for FC Oranje. Man of the match honors went to Friso Klok. The squad went per Heineken bus to Abbey Road but in honor of Bob Marley stayed on the grass a bit longer.

DIB FC did battle with Shanghai Reunited. After a disappointing defeat against DIB in the SIFL Cup semifinal three weeks ago, ReUnited was determined to strike back in the league, and by doing so securing third spot in the standings. Three points would pretty much seal the deal. Both teams missed several players but still fielded strong squads. ReUnited started the game strongly, putting pressure on the DIB defense while DIB played long balls to their fast wingers and strikers to put pressure on ReU's defense. It was ReUnited though that managed to score early on. After a corner from the right, Joel Taira’s header wasn’t handled well by DIB's keeper and German Niklas Gogoll converted the rebound from short distance for a 0-1 ReUnited lead. 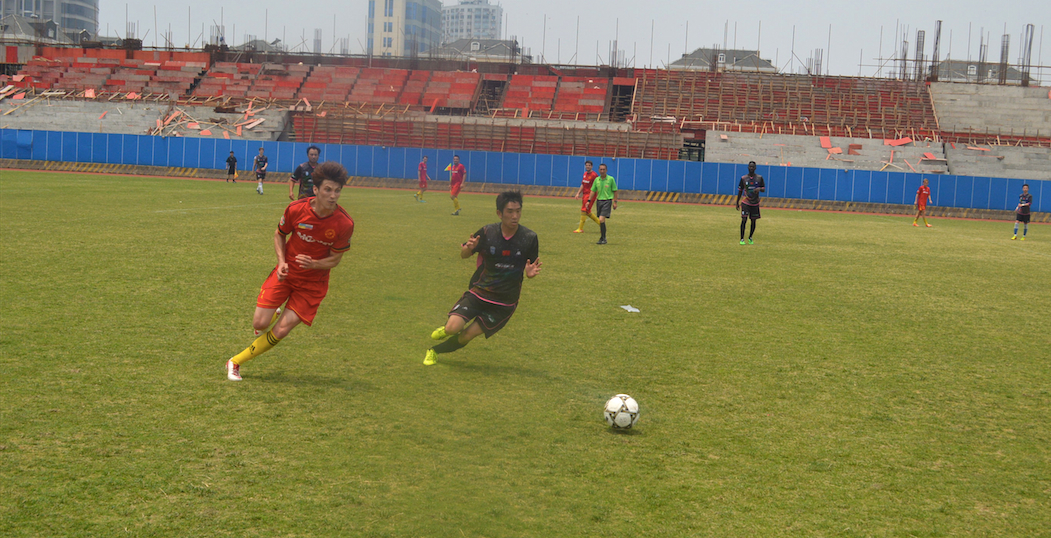 DIB struck back after 17mins when Cai Mengsheng managed to dribble into the box from the left side, and with a shot to the far post beat the keeper leveling the score at one a piece. The game was very open with chances for both sides. After about half an hour Hajo Yagoub played a beautiful long ball to Niklas Gogoll, who outran the DIB defense and then fired a clean shot near the far post into the net retaking the lead for ReU 1-2. A few minutes before halftime DIB got a free kick on the left that was placed into the box where Zhang Sheng had an easy tap in for a 2-2 halftime score. 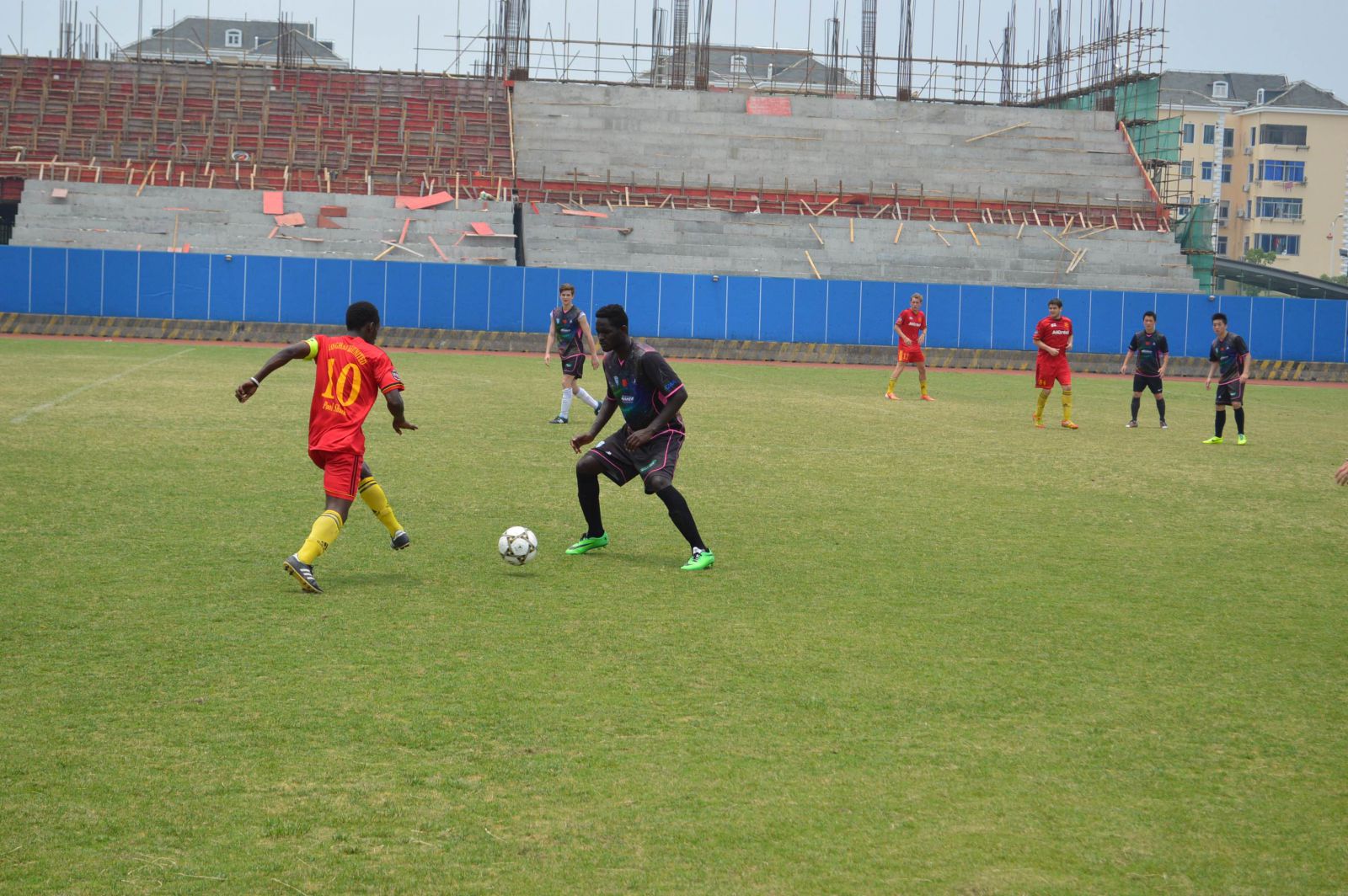 The 2nd half started the same as the 1st yet ReU was able to put more pressure on the DIB defense. Nonetheless it was DIB who took the lead after about 20mins when Pepe Sow played a through ball from outside the box towards Cyrille Laoukoura (right below) who beat the offside trap then converted sending DIB up 3-2. ReUnited stepped up their efforts and the game got more heated. When Chris Zhou received his marching orders for a second bookable offense DIB were left with 10 men. ReUnited smelled blood and upped the ante. Their fighting spirit got rewarded minutes before the final whistle when from a combination involving Adam Kling and Oraz Arslanows the ball ended up inside the box where Niklas Gogoll (below 2nd right) was waiting to complete his hattrick for a 3-3 final score. 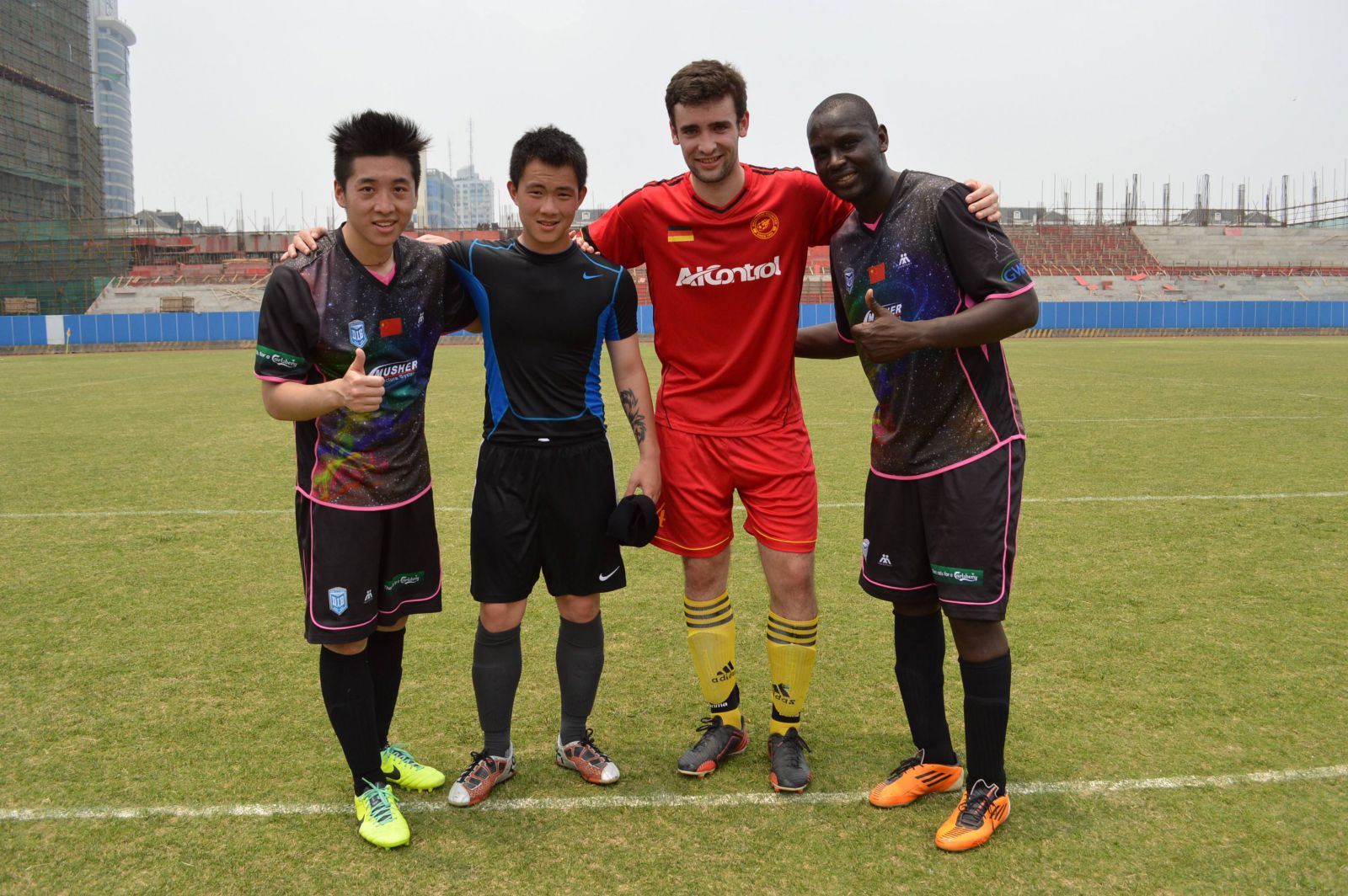 Steve Ishemezwe (#10 above) received man of the match honors for ReUnited while Cai Mengsheng (below left) received these honors for DIB. On June 21 in the last game of the season the two teams will lock horns again which will give ReUnited another chance to secure third place. 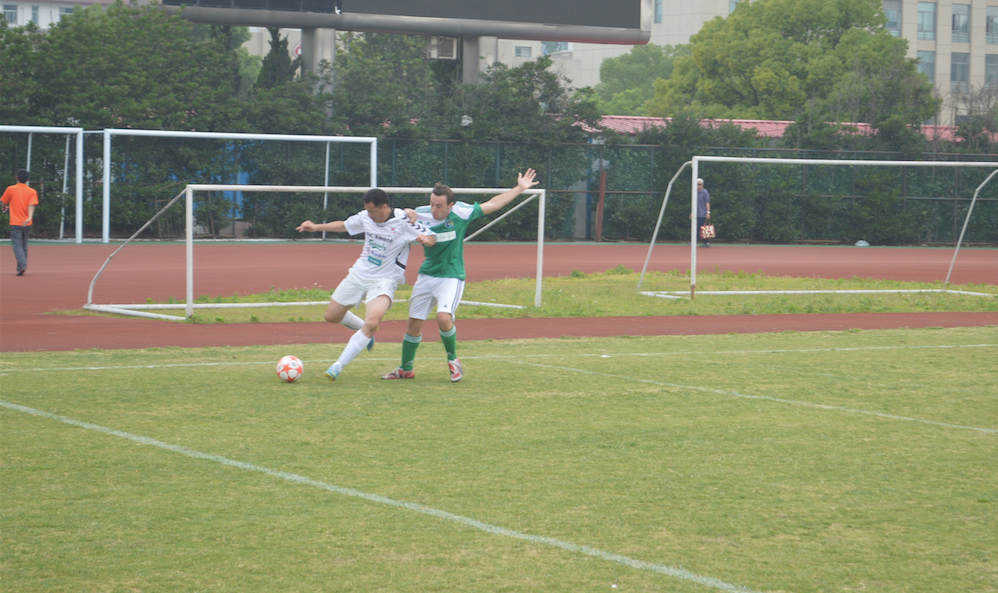 In the First Division the Shanghai Vikings FC lined up to play the Shanghai Cosmos. For the Vikings a win would all but secure 2nd place in the standings guaranteeing Premier League promotion. Though theoretically Voodoo still have a faint chance of reaching second spot providing the Vikings don’t win their last match and Voodoo score 19 goals from their remaining two games. The Vikings had 15 players to complete the mission. The heat was immense and a bit too much for the battle hardy Nordic Vikings with their aging bodies and as a result had a somewhat shaky start the first four minutes when Cosmos had several runs towards the Viking goal. Then after about 5mins Viking Cheng scored the 1-0 from a flank play over the right, a weapon the Vikings would use many times in the match. The Cosmos left a lot space open on the sides and focused solely on long balls to try and reach their lethal striker Jordan ‘pink sock’ Campbell upfront (below). The Vikings kept using the Cosmos weak spot using the flanks to put pressure on the Cosmos goal. It worked well when Peter Tabor quickly doubled the score to 2-0 and a moment later he scored again to make it 3-0, which was also the halftime score. The 2nd half was more of the same yet the Viking defense were able to control the Cosmos offense a bit better and started getting a bit more organized in their attack. They could have scored a lot more goals during that phase but Smiegel’s efforts lacked accuracy. Peter Tabor on the other hand had no such trouble and when he completed his hattrick from a half cleared effort by youngster Daniel that was dropped by the Cosmos keeper the game was practically over at 4-0. It stayed that way and with this result the Vikings have pretty much gained promotion to the Premier League. Without playing their greatest football the Vikings were very effective up front.  Well done boys! Man of the match honors went to Peter Tabor (below). On June 14, 2014, a full round of First Division league fixtures of the Shanghai International Football League is scheduled and one Premier League match between the Big Bamboo Shanghai Shooters AFC and Shanghai Krauts FC. Matches to be played at the Rugby Club in Waigaoqiao and Songjiang Sports Center in Songjiang.

Visit the official SIFL website to find out more.

Our weekly roundup of the soccer action in the SIFL

That's Shanghai's weekly roundup of the soccer action in the SIFL

Our weekly roundup of action in the SIFL.

The weekly news from the Shanghai International Football League