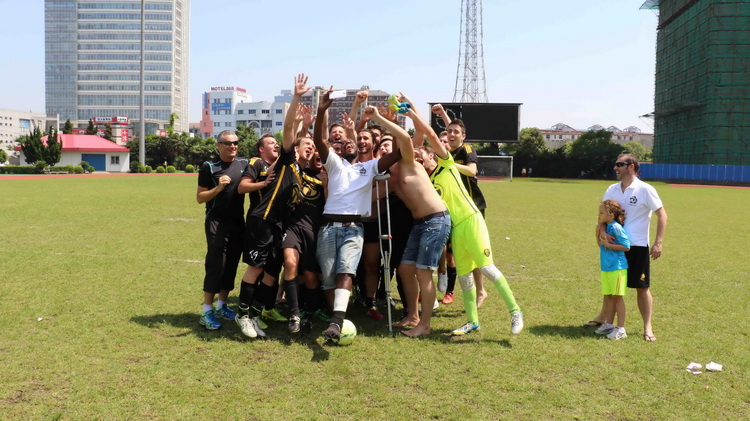 In the Premier League, the Championship match was between league leaders Shanghai Puxi Lions FC and second ranked Shanghai ReUnited. For the Lions it was the last match of the season and a win or draw would deliver the title. For ReUnited a win would seal it providing they’ll convert their last remaining fixture versus Azzurri FC in a win. The Lions strategy was clear, dominate the midfield with five midfielders and good old Charlie Georg upfront. ReUnited focused on stopping the Lions midfield and counter their attacks. This resulted in mostly midfield actions without clear goal chances on either side at the opening phase of the match. 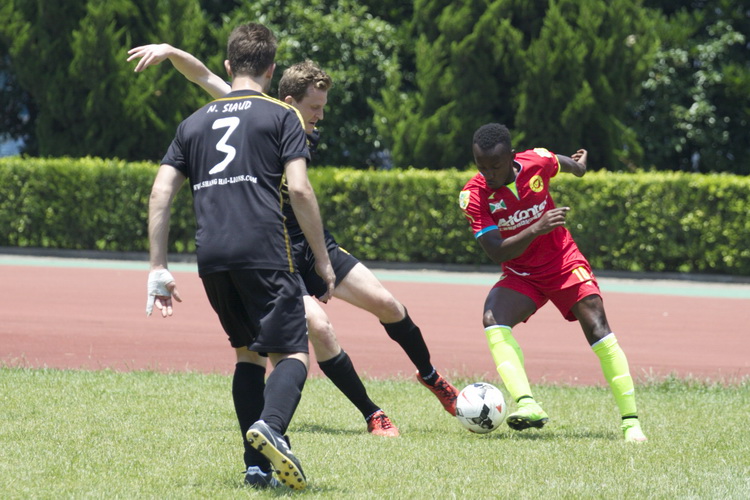 It was obvious that the heat took some speed out of the game, which was not a bad thing for the Lions as Reunited have very fast strikers. The Lions passing game worked well and they came close to scoring from an Azzeddine Takouloufa free kick (below) but he curled the ball just over the bar.

ReUnited couldn’t build up as they liked and instead opted for long balls which were easy targets for the Lions’ rock solid defense. To put Charles Georg (below) up front proved to be a touch of genius. A fast combination over the right put Georg in a scoring position in the box and with a low drive shot from a tight angle he put the ball in the net taking a 0-1 Lions lead. Soon after that, Romain Haotion went through for a one on one with the keeper but his lob failed to hit the target. No more chances were created and the half ended with a 0-1 score line. 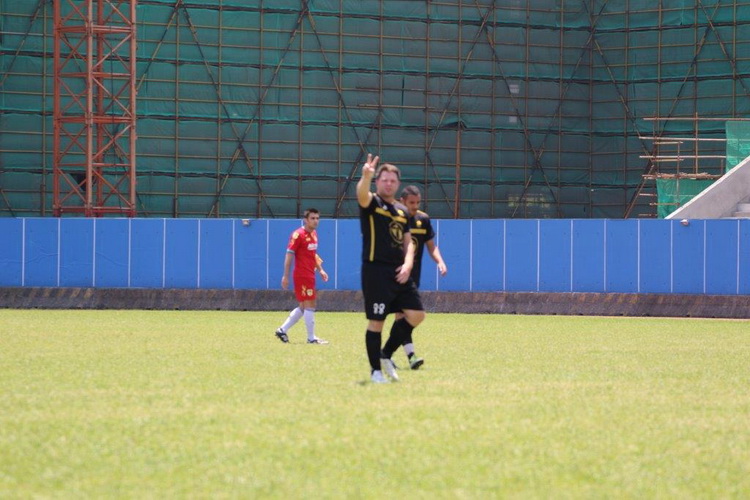 The Lions retreated to a small cave for their halftime talk and felt at home at once. Dutch Master Freek Boelen, born in a cave, commanded his troops a final time with a clear 45-minute mission for glory. Then, two minutes in the second half disaster struck for the Lions as Dave O’Reilly got a red card and received his marching orders. It left the Lions to finish the match in the sizzling heat with just ten players. 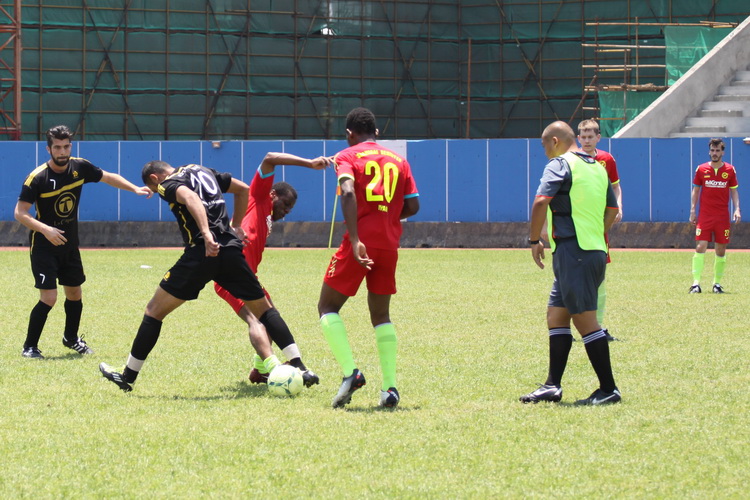 ReUnited used their numeric advantage to push men forward and sensed a reversal of fortunes could be on the cards. They went for it and kept their title dreams alive with a final offense. But the Lions were determined to keep their defensive lines tight and what followed was a heroic display of fighting spirit of each single Lion left on the pitch. They circled the wagons to protect their lead and put Takouloufa upfront as a lone striker. 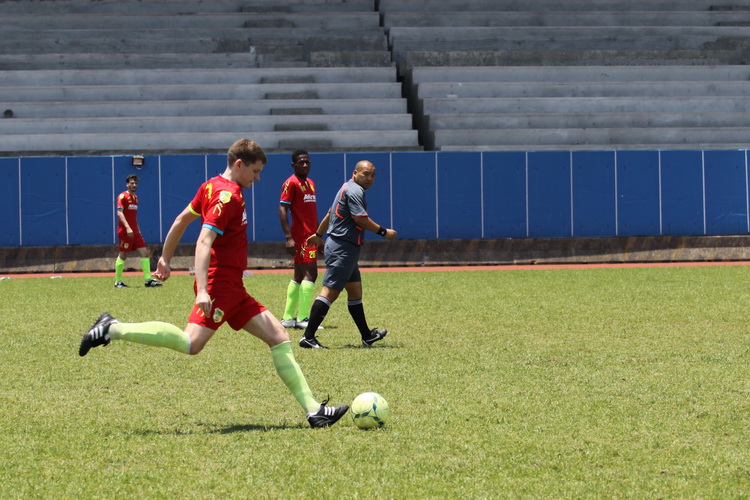 Nonetheless, ReUnited kept pushing while the Lions were desperate to make it to the finish. In the last minute of the game ReUnited’s Mandela (below) had the last chance when he fired a shot on target but his effort went wide and that was as close as ReUnited would get. The Lions played out the match, held on to their narrow lead and added a final three points to their tally. 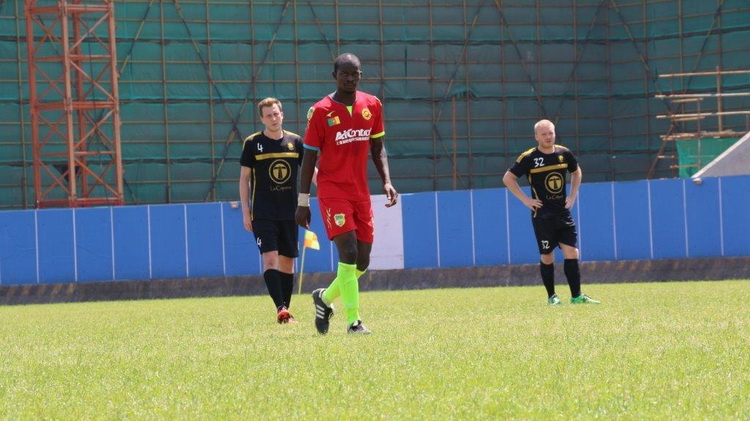 When the final whistle came the Lions squad erupted with joy as the 2014/2015 Premier League Championship was finally theirs. Credit to ReUnited who were in hot pursuit for much of the season and kept chasing the Lions until their very last game. Lions’ Simon Spangenberg played an excellent game in defense and received man of the match honors. The Lions felt a great sense of relieve with all the ups and downs they had this season. They had a very pleasant bus ride back that was concluded with a great brunch at their sponsor La Creperie. After that they disappeared in Shanghai’s nightlife. 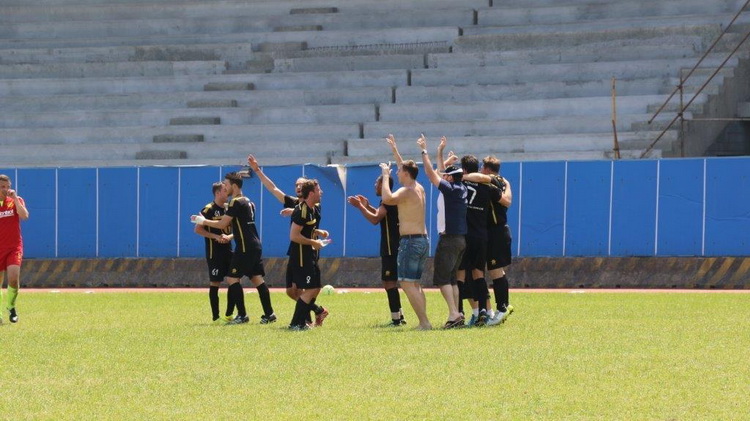 ReUnited had a fantastic season, the best in their history so far. They were in the championship until the very end and can be proud of their achievements as runners-up in the league, runners-up in the Hebiguchi cup and reaching the semis of the SIFL Cup. Later that night they celebrated in style at their legendary annual award party at their new sponsor The Park Tavern. 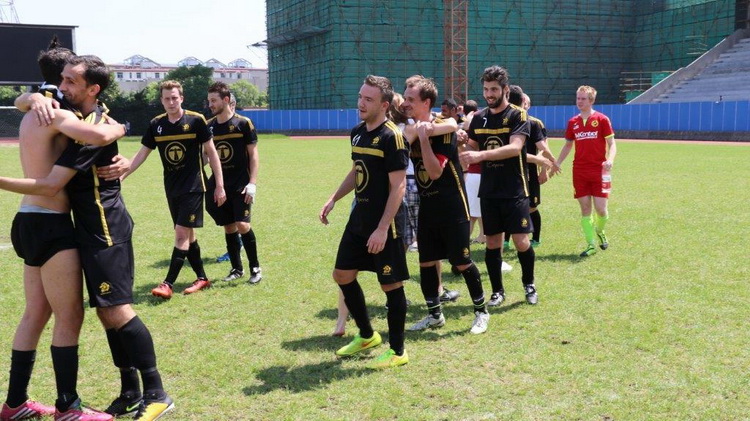 The Lions statistics say it all: two seasons undefeated for a total of 36 matches. They have recorded just one loss (vs DIB) in three consecutive seasons. It’s a very convincing record and they are the team to beat next season. They are still in for the treble when they play the Big Bamboo Shanghai Shooters AFC in the SIFL Cup Final coming Saturday. 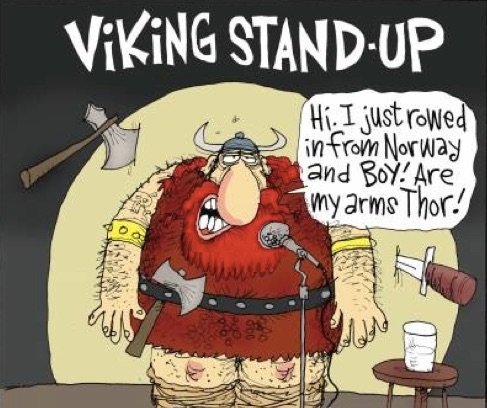 In the First Division, the Shanghai Vikings FC locked horns with Hstone HFC in their last fixture of the season. It turned out to be a real thriller with fortunes changing sides throughout the match. Though the Vikings were controlling the game mostly, HFC’s quick counters resulted in a number of goals. Despite Viking dominance in the first half, it was HFC that drew first blood getting on the score sheet first taking a 0-1 lead at halftime. 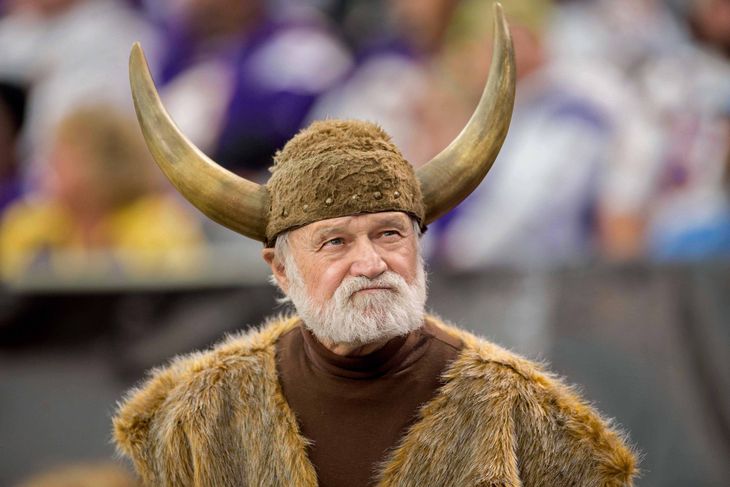 In the second half, the Vikings equalized when Joakim Lassen (above) got one past the keeper for 1-1. HFC struck back from another trademark counter for 2-1. Not to be outdone, Lassen got his second of the match tying the score 2-2 only for HFC to take the lead again at 2-3. In the last ten minutes the Vikings fought back when Lassen completed his hattrick for a 3-3 final score with both teams sharing the spoils. Hstone HFC’s goals were scored by Weihua She, Huang Feng and Xiaogang Xu. Vikings’ Jens Christensen received man of the match honors as did HFC’s Sunbin Xi. 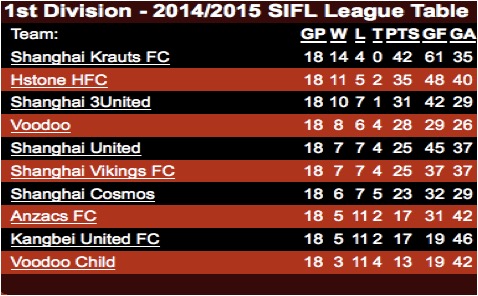 Games to be played at the Shanghai Community and Sports Center in Waigaoqiao.

Visit the official SIFL website to find out more. http://www.eteamz.com/SIFL/

Our weekly roundup of the soccer action in the SIFL

That's Shanghai's weekly roundup of the soccer action in the SIFL

Our weekly roundup of action in the SIFL.

The weekly news from the Shanghai International Football League