“I want to write better songs, I want to put on better shows, I want to make better music videos. I want my next album to be better than the first and the second.”

That’s how Bruno Mars responds when we congratulate him on the rapid escalation of his solo career, effectively only launched in 2010. The musician, who’s bringing his Moonshine Jungle Tour to Shanghai on April 3, doesn’t seem to care for compliments.

Still, there’s something to be said for his resolve. In the span of four years, 28-year-old Mars has reached trailblazing achievements, becoming the go-to guy for hip-hop melody and, as of last year, earning the dubious honor of being the world’s most pirated artist together with Rihanna.

Not that he should worry about that too much – he’s already got two platinum albums and 18 Grammy nominations (including two wins), and has sold 68 million singles worldwide. Three of them are counted amongst the best-selling singles of all time.  The man is definitely doing something right.

The son of a Puerto Rican-Jewish percussionist and a Filipino dancer, Mars (real name Peter Gene Hernandez) was born and raised in Hawaii. At age four he became part of his father’s variety show as a mini Elvis Presley impersonator. A few years later, he went on to cover Michael Jackson also. The training hugely influenced his formative years as a performer.

“Kids around me were growing up watching Michael Jordan, Joe Montana or Mike Tyson,” he says. “I was studying rock stars – Elvis Presley, Michael Jackson, James Brown, the Beatles. That world fascinated me the most.”

Does he have a favorite tune from the two music legends that shaped his musical education? He ponders… “I’m going to go with ‘Dirty Diana’ for Michael and ‘Heartbreak Hotel’ from Elvis.”

Learning a wide repertoire at a young age helped the singer become acquainted with the stage, and develop a versatility of style that’s been pivotal to his success both in the recording studio and live. His light, soul-influenced voice is an easy fit in a range of genres, his style quick to shift from fancy footwork routines to slow-paced ballads. There’s no place he doesn’t belong.

After moving to Los Angeles to pursue a professional musical career, an early record deal with Motown went nowhere. The experience, however, proved fortuitous for the singer. Mars met songwriter Philip Lawrence, an encounter that eventually landed him a contract at Atlantic Records and got him his first break into the industry as a producer with the Smeezingtons, a production company he co-founded with Lawrence and fellow partner Ari Levine in 2009.

Then there is a slew of hits from his own repertoire: ‘Just the Way You Are,’ ‘Grenade’ and, most recently, ‘Locked Out of Heaven.’ There’s no doubt that he can pen a tune. The process to get there, however, isn’t as chain-like as it may seem.

“I don’t sit down and think, ‘I’m going to write a song,’” he says. “Inspiration hits me always unexpectedly: on a plane, when I’m out or just before I go to bed. An idea will suddenly come to my mind, and sometimes I manage to turn it into lyrics the next day. Sometimes it’ll take me one year to get something real out of it. You can’t force creativeness.” 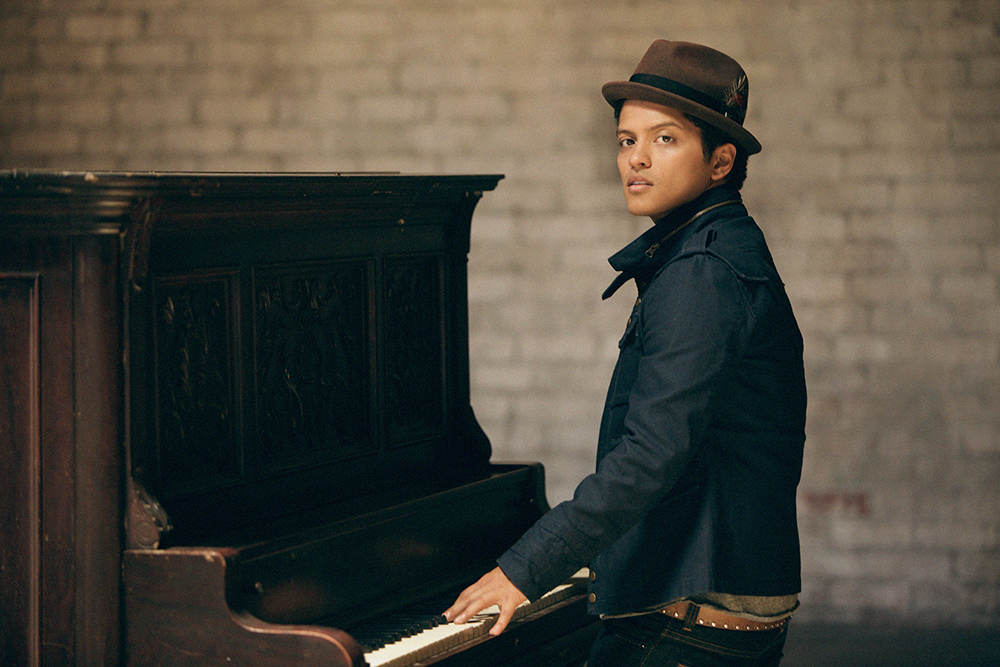 The Smeezingtons produced his debut album, Doo-Wops & Hooligans, back in 2010. An effortless example of pop song craft, it earned a nomination for album of the year in the US, winning generally positive reviews for what Entertainment Weekly described as “instant-access melodies” and “sly snatches of dance-floor swagger.” It also sold over six million copies worldwide, catapulting Mars into the upper echelons of pop.

“Mark and Jeff are good friends,” says Mars. “They are good buddies of mine, but also my favorite producers out there today. I’m constantly going back and forth with them, thinking about the next step and what we can do together.”

The album, thematically darker than the breezy Hooligans, offers more than clinically perfect song craft, and unsurprisingly, its lead single and number one hit, ‘Locked Out of Heaven,’ was nominated for Song and Record of the Year at the 2013 Grammys.

On the wave of such success, Mars was asked to perform at this year’s Super Bowl Halftime Show, the most illustrious gig in pop – so much so, that no appearance fee is granted to the performers: payment comes in the form of exposure.

It’s a slot that demands an established star with epic wattage. Last year it was Beyonce, the year before Madonna. In this respect, Mars might have looked like an odd choice. Electing to have him share the stage with guest performers the Red Hot Chili Peppers may have been even more unusual. But his performance paid off.

The singer – who was also the first artist in ten years to headline before turning 30 – launched a kinetic entertainment assault that certainly left an impression – to some positive, to others rather too safe. The New York Times stated that Mars’ lack of tabloid appearances and fragrance deals kept him from being a household name. The Guardian criticized him for delivering “slick, unmemorable pop, ruffled only by his big, fratty brothers.”

Mars sneers at his detractors. “The Super Bowl has really become this huge pop culture event for any artist to land, so it really was an honor to play there. At the same time, there’s a lot of pressure involved – of pleasing the audience, of playing in freezing cold weather.

“There were a lot of factors that were working against us, but it turned out to be a lot of fun. It’s something I’ll carry with me forever, the opportunity to one day tell my kids that Dad performed at the Super Bowl.”

As he prepares to hit China, he is “excited simply to be there. I haven’t spent much time in Asia – though growing up in Hawaii, I have always been surrounded by Asian culture, I relate to it – so I’m really going to be taking advantage of this opportunity. Then, of course, I’m keen to perform in front of an audience so very new to me.”

Enjoying the present, he says, is all he wants to do right now. “I have been on tour for a while now, and I still have some more to go after Asia. It’s important that I don’t burn out. I have to keep my music sacred, so that when I’m ready, it’ll be ready too.” Undefeated World Champion boxer Michele Aboro has not only clashed with titans in the ring, but also battled prejudice and, most recently, breast cancer. Brawl on The Bund 2015: Bruno 'The Italian Wizard' Rinaldi vs. Steve 'Tornado' Guo We have a pair of tickets to the big Bruno Mars concert on April 3 to give away.