His opulent taste can be noted in all aspects from concept to design to menus to execution; there are no corners being cut, unless it's by the highest end chef’s knife on the market. The letters of the venue each stand for one of the three components. Ø is for Ømakase – a dining room featuring one multi-course chef’s menu for RMB880.

S stands for Savøur – a cocktail lounge and bar with drinks curated by the Hope & Sesame team, plus an impressive spread of snacks of all sizes.

And P represents Pøp – an upstairs, 10-seater pop-up kitchen with a rotating chef-arranged menu, plus wine pairings or Basao tea pairings, for RMB1,280. The idea is to migrate between the spaces as the night evolves – a nibble here; a standing drink at one of the three 360-degree bar stations over there; a wine pairing dinner at high-top tables upstairs; followed by a resettlement in a plush, button-tufted couch on the main floor. Like a contemporary art gallery for chefs to display their most eccentric work, the whole concept – from ‘chefs in residence,’ to interactive dining, to boundary-pushing, ever-evolving sips and snacks that pose existential questions like ‘What even is a cocktail?’ – is exceedingly avant-garde.

“I’m not opening a restaurant, I’m opening an experience,” says owner Boris Yu, between sips from a cocktail glass filled with a clear liquid that smells like a lemon and a curry leaf got friendly with a bottle of soju.

And, from top to bottom, it is just that – a sensorial trip that pulls diners to different places and times through the interaction between food, drink and memory. 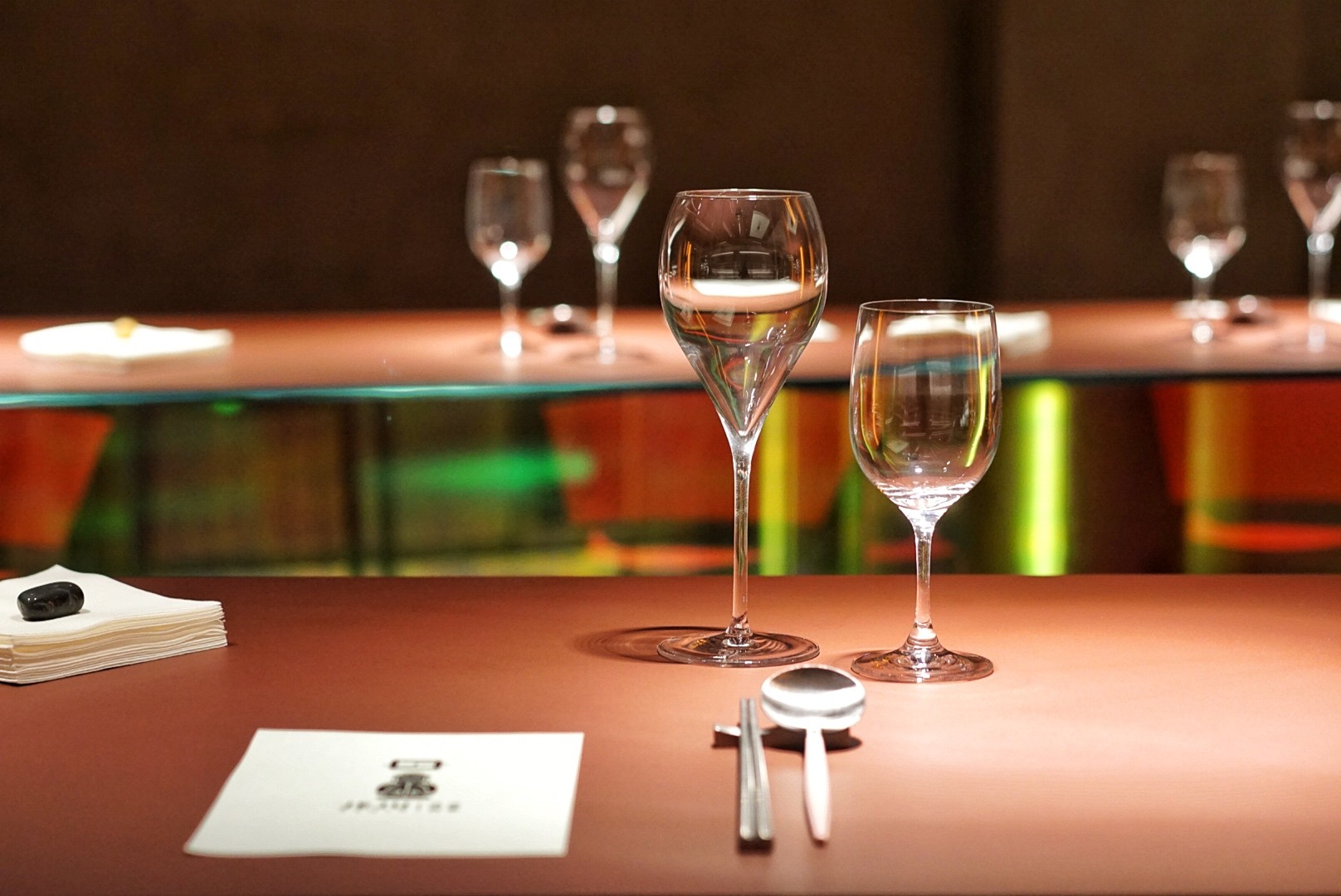 The eight-course menu carries guests through a year’s cycle in Korea – with tastes from the start of spring into the summer solstice, from a dewy sprinkle that marks the preamble to fall into winter’s first freeze. 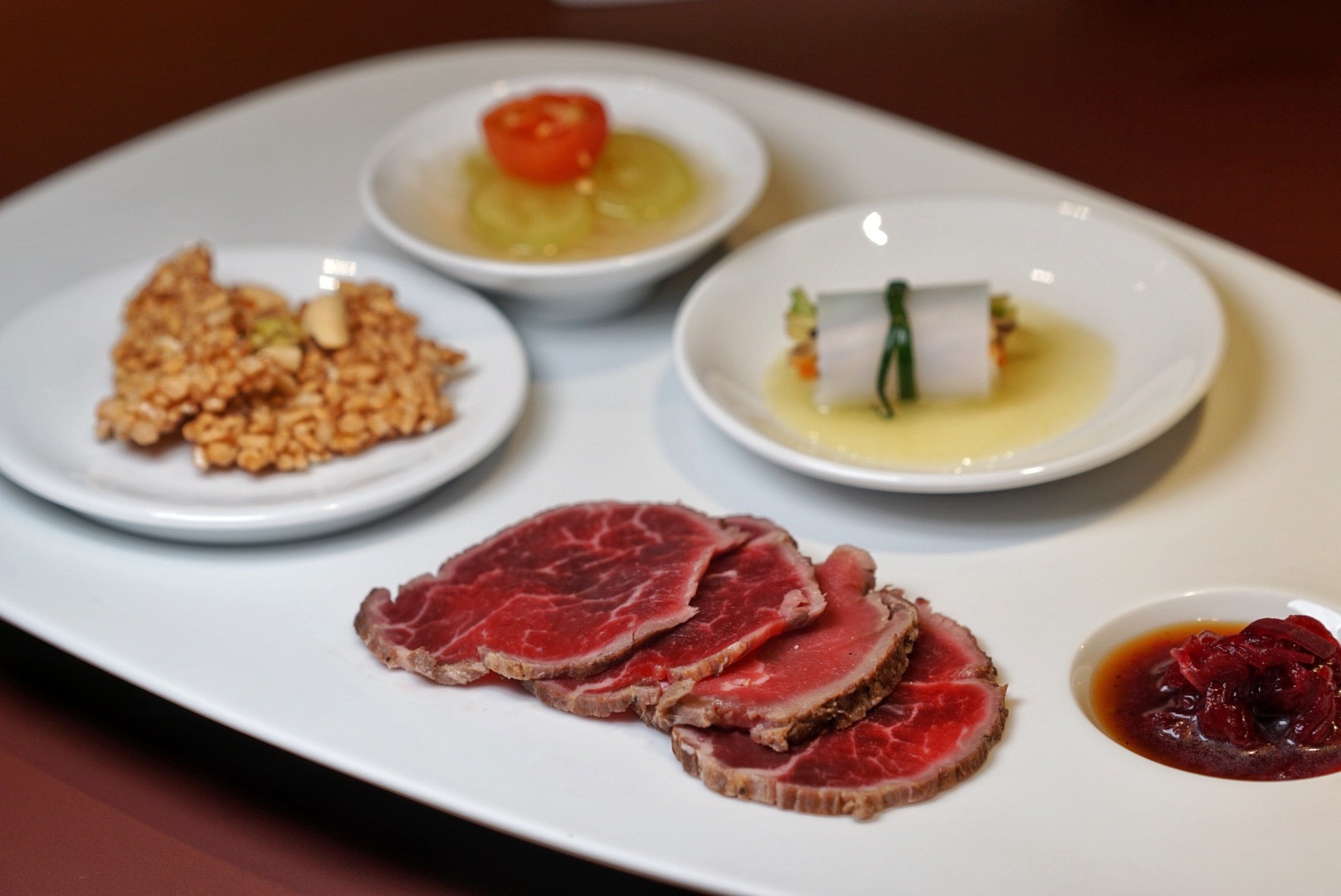 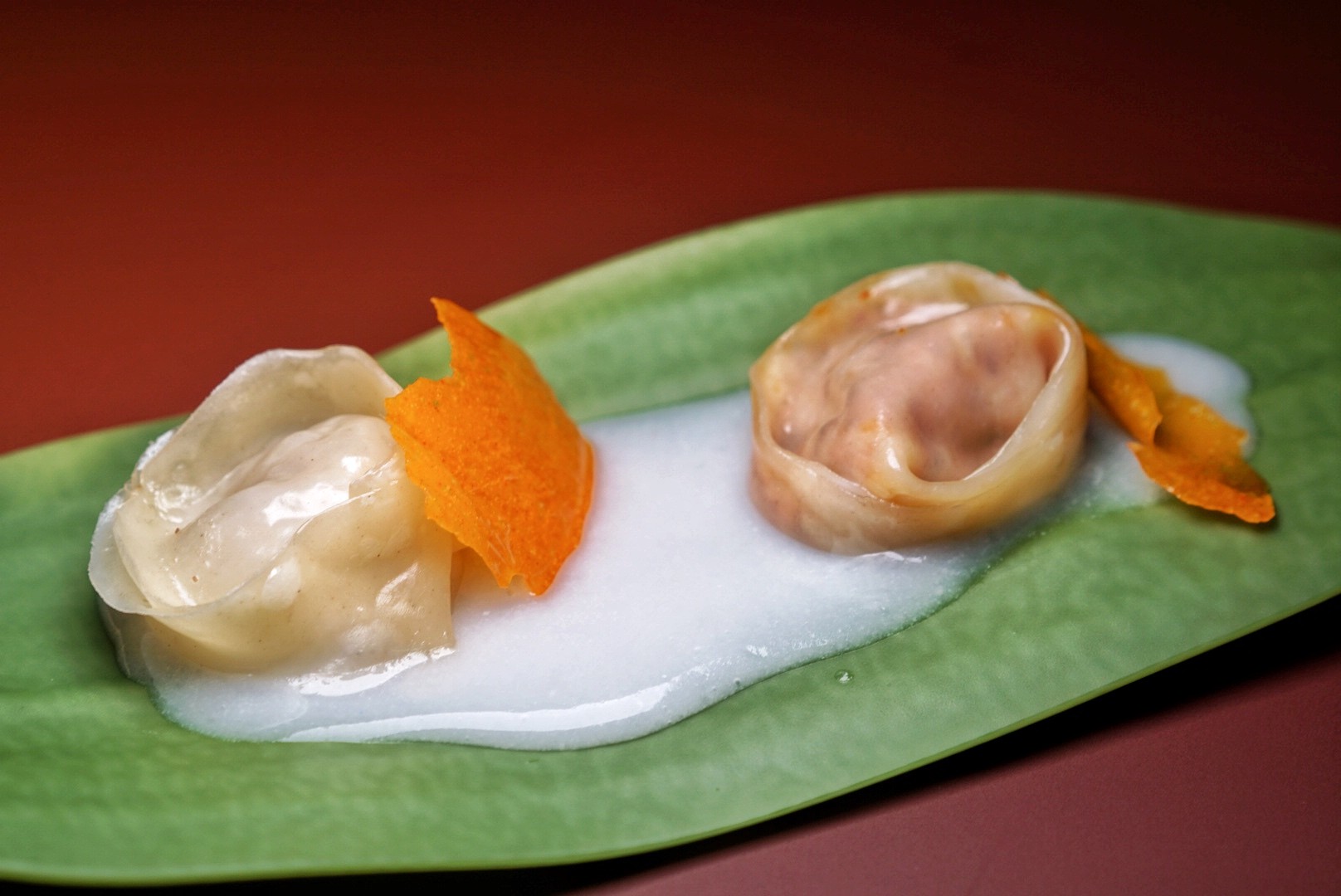 Integral elements of seasonal dishes like ginseng chicken – or samgye-tang – are reimagined; the flavor-soaked rice is reduced into a starchy congee-like base, anchoring to the plate a pair of hand-folded mandu dumplings crowned with liquid kimchi crisps. 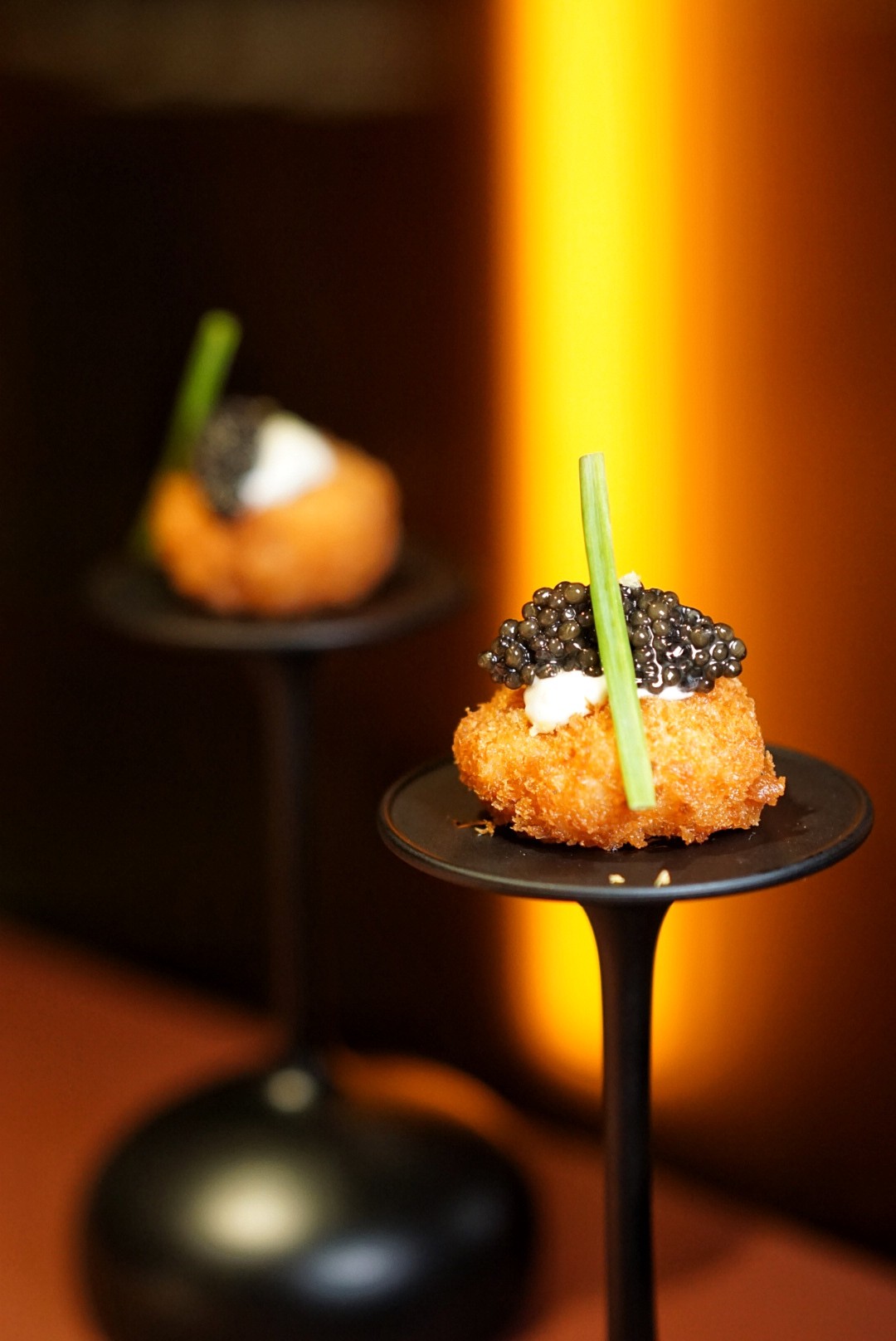 A contrast for the senses, next appears a shatteringly crisp shrimp fritter adorned with a canelé of refreshing cucumber kimchi tartare sauce and glistening beads of Kaluga Queen 7-year sturgeon caviar. 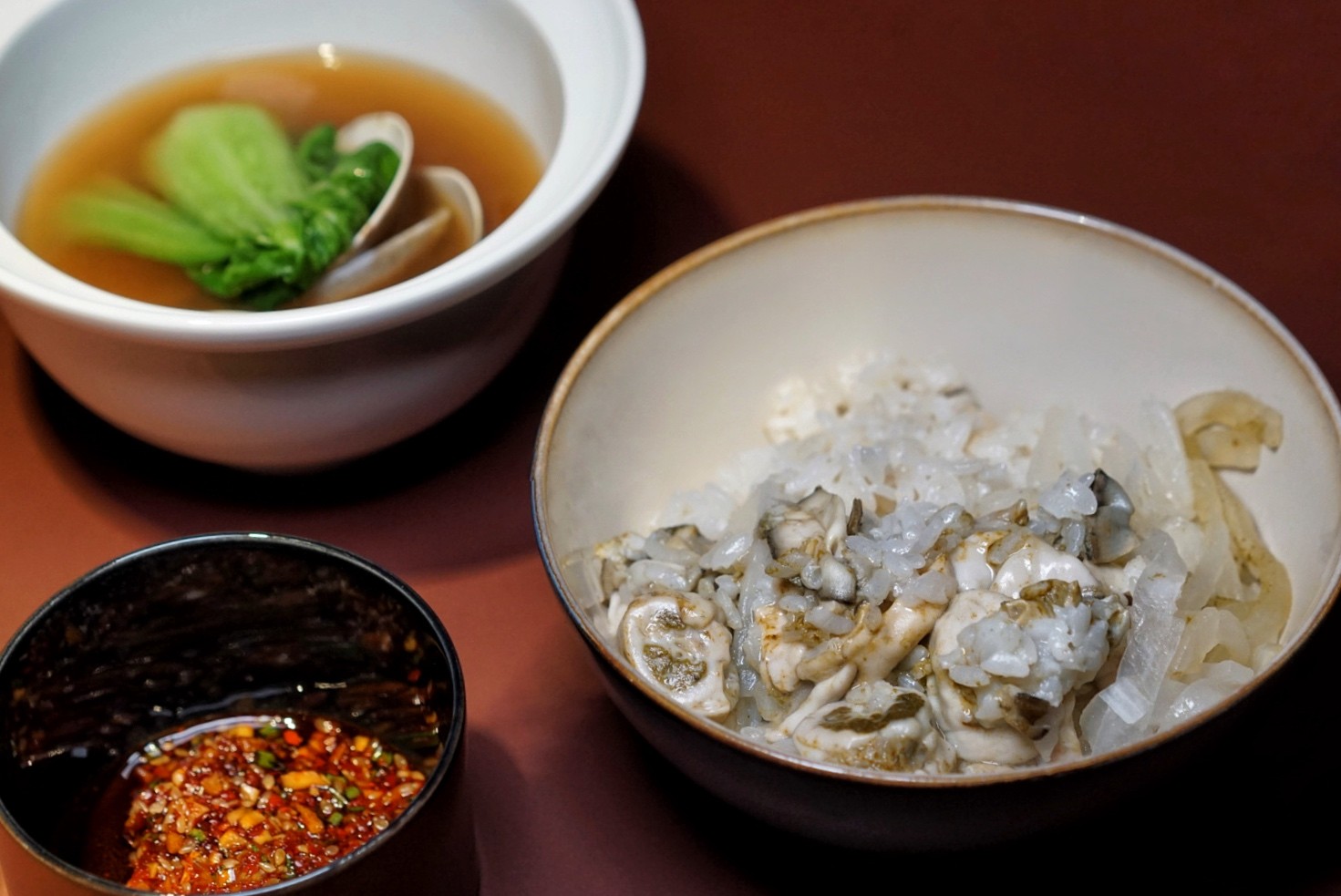 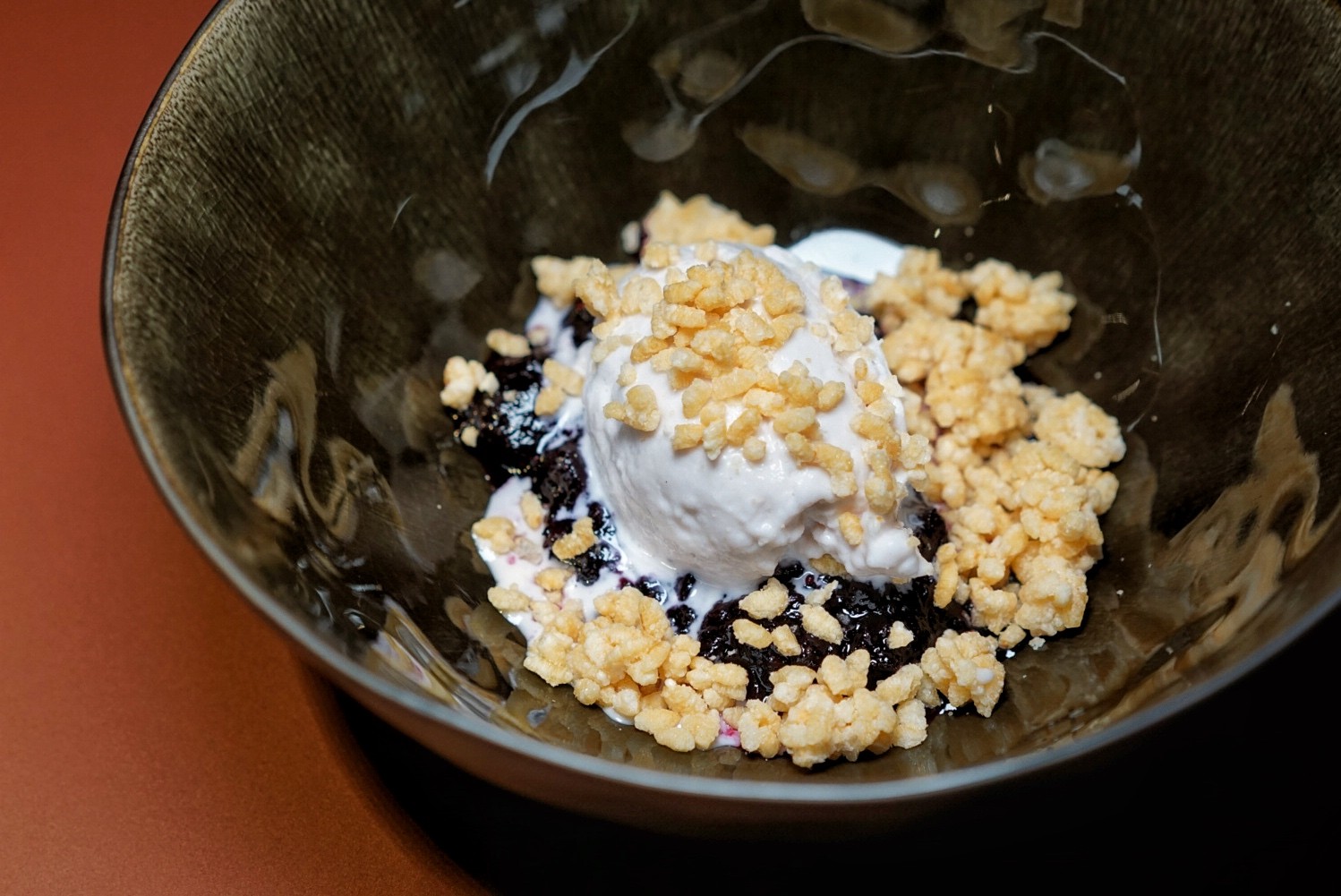 When compared to Jeju Sagye (the new name for Chef Tom’s original multi-course, rotating menu venue previously known as Jeju Izakaya), flavor and ingredient combinations are more delicate, precise and have a familial draw as many of the recipes come from his childhood memories of cooking with his mother.

Since opening, Chef Tom’s menu has been in such high demand that, at the end of December – when the menu was supposed to end – it was moved downstairs into the Ømakase space for the next few months (without the wine pairings) for RMB880 a head.

It will remain in Pøp for a few extra months for those willing to reserve the entire 10 seats, so the long list of reservations can be satisfied.

Our one piece of advice – book ahead. Very ahead. 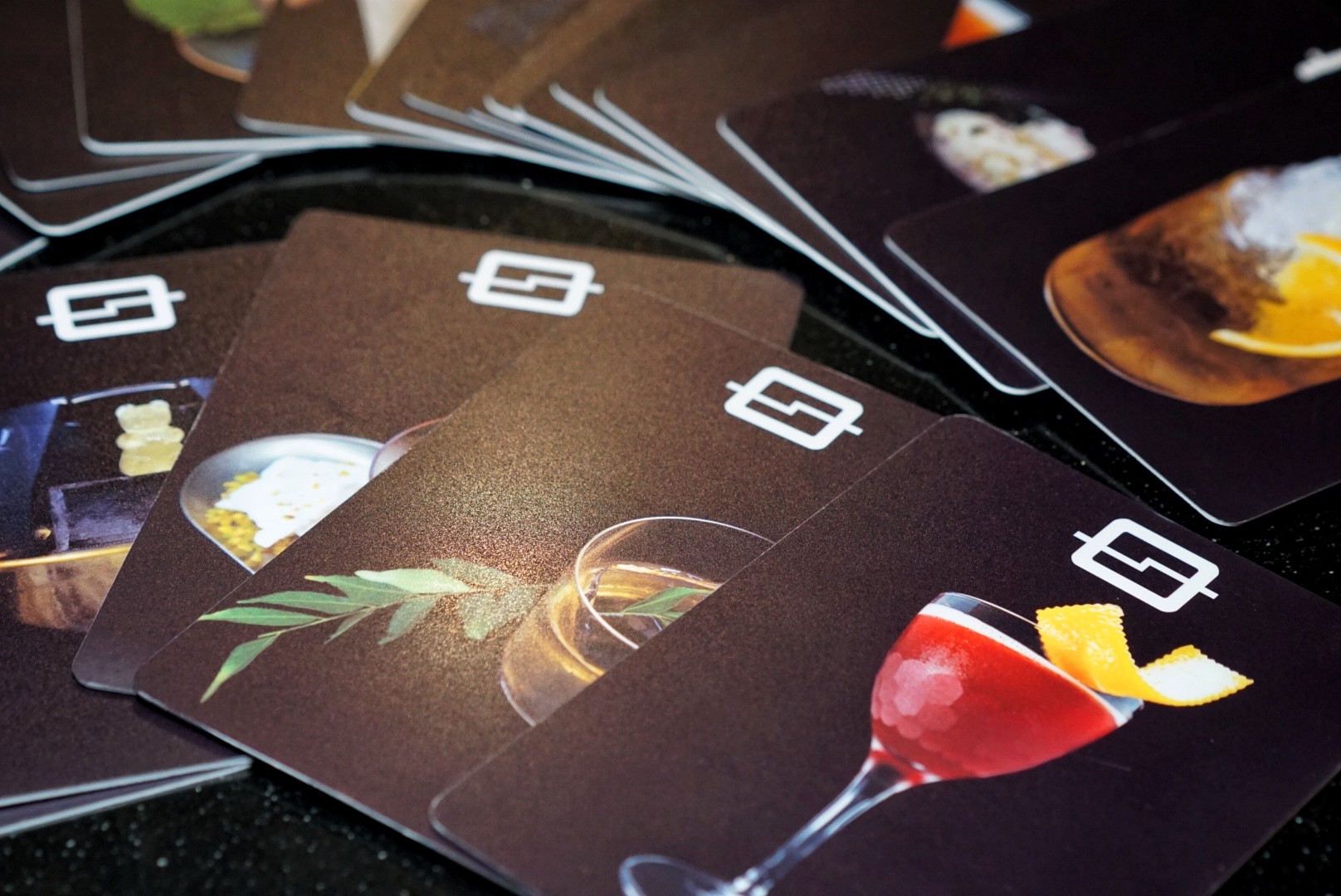 Moving to a new spot (without having to layer up in our winter coats), post-dinner libations take place in Savøur.

There are 16 to choose from; displayed on playing-sized cards rather than a menu, you can organize your thoughts into piles or pick at random – dealer’s choice. 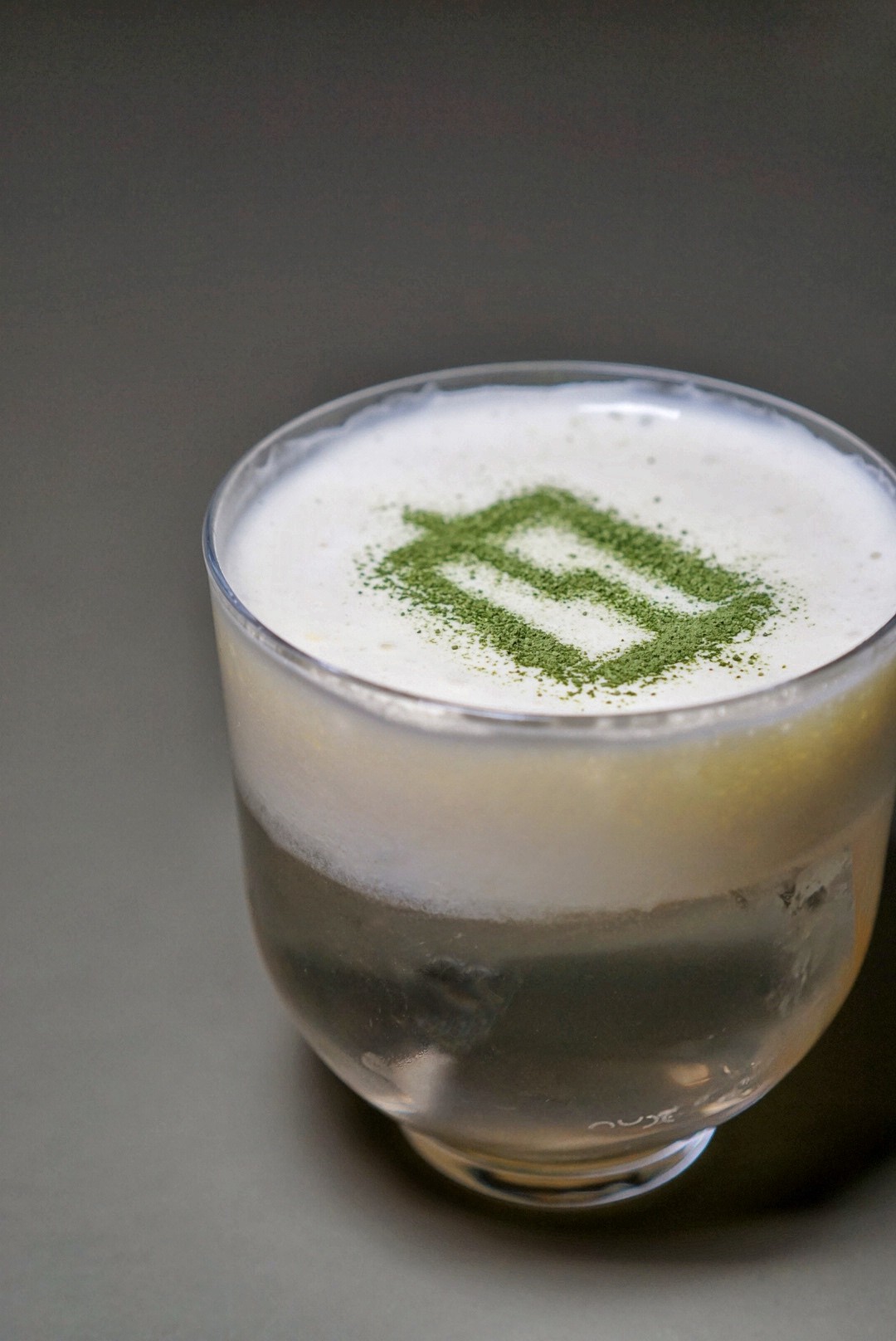 Consistently ranked Asia’s 50 Best-ranked, Hope & Sesame put Guangzhou’s cocktail scene on the map. As is their wont, drink descriptions look more like grocery lists than what you'd expect to find shaken into a cocktail. 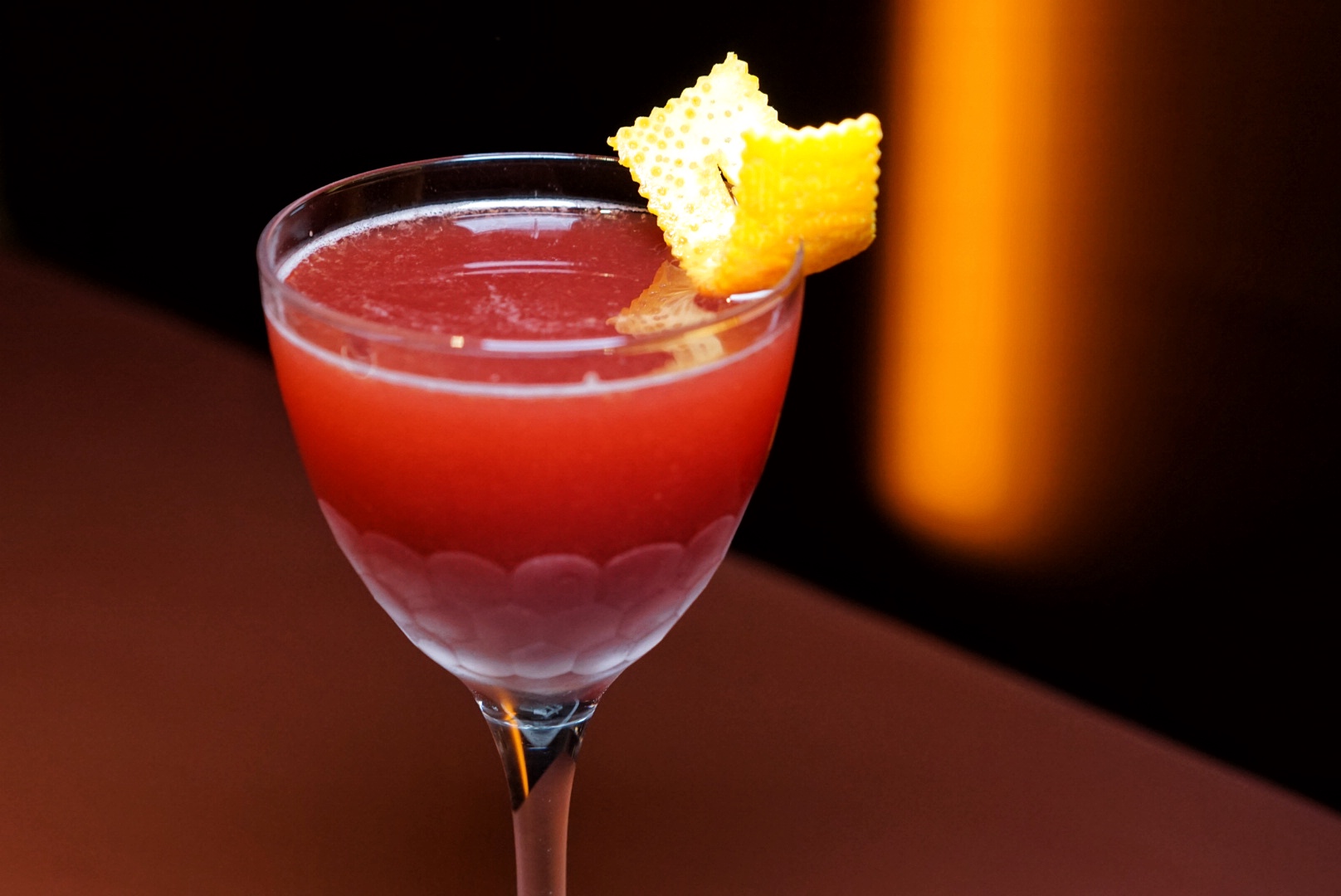 A lingering Laphroig smokiness is subdued by earthy beetroot’s sweetness in the Psi (RMB98), ruddy with a healthy glow. 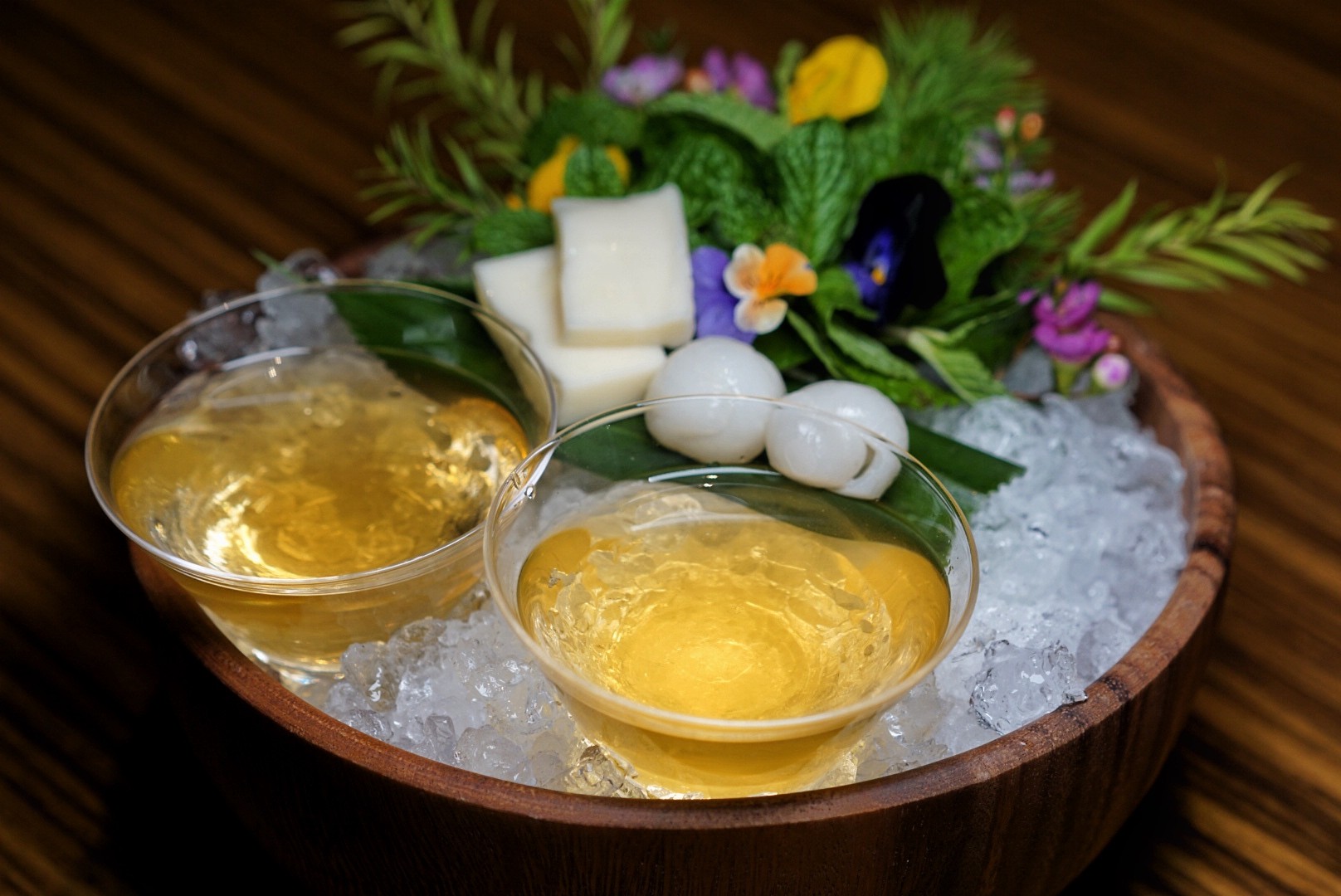 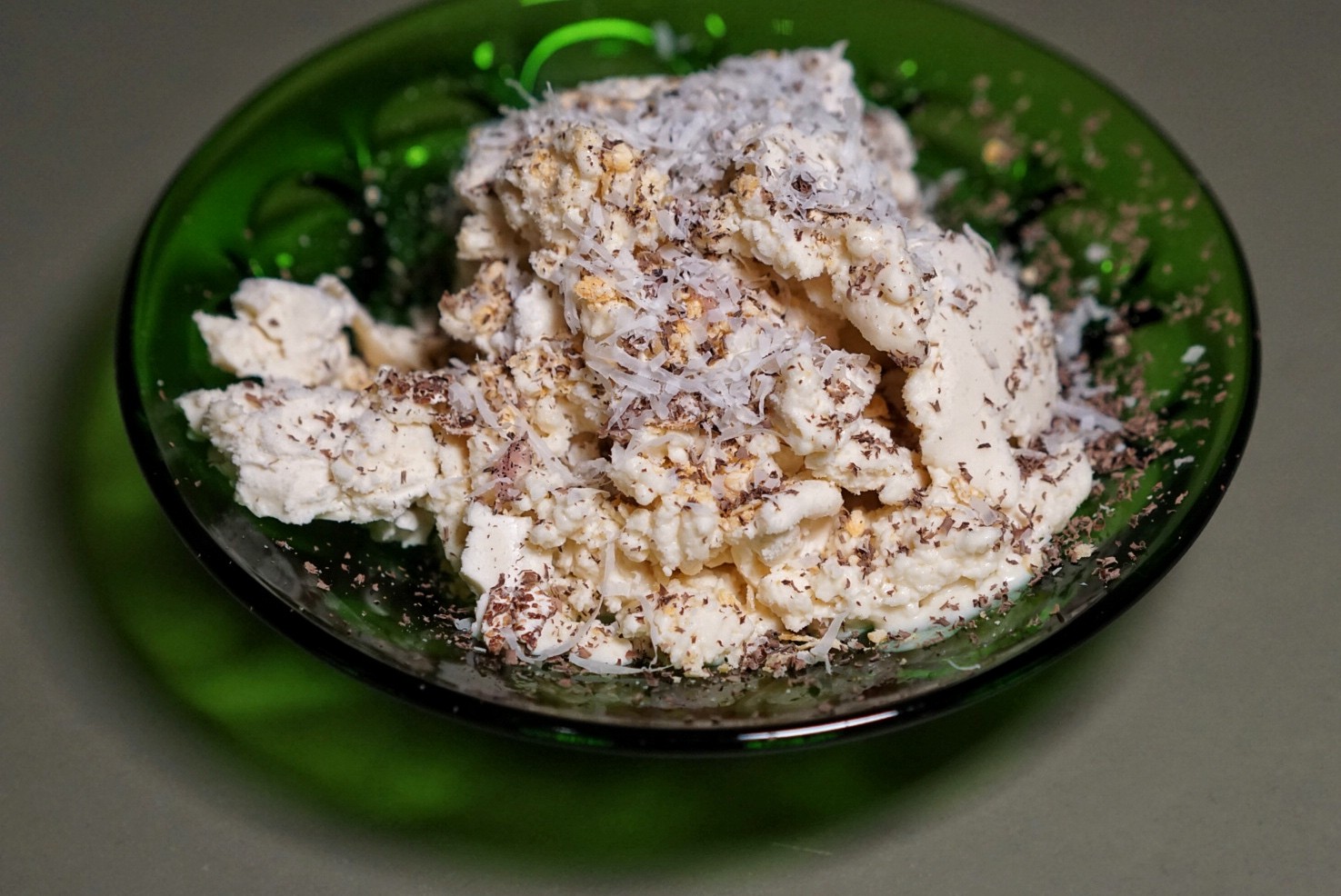 A trick to the senses, the Zeta (RMB138) is presented as a heaping ice cream sundae – speckled with shavings of gruyere cheese and dark chocolate – but the bold Chivas 12-year comes through immediately, asserting its dominance as a surefire booze-forward spoonful.

As for snacks, there are one-biters to full meals – Paella (RMB248) and Fideua (RMB198) – and a smattering of in-betweeners. The Tomato Tatin (RMB52) is a refreshingly tart nibble, with confit tomatoes dribbled in a balsamic reduction lining an airy, brittle puff pastry. For vegetarian-friendly options, the Beetroot Tartare (RMB78) sees poached beetroot on a flower of endive leaves filled with a dewy yogurt, green apple and avocado sauce. It can be served with (or sans) crab. To find ØSP is not the most straightforward. You gotta want it.

But once you turn down the correct backstreet that curves into the next alley that walks you through an art gallery that eventually opens up to ØSP’s entrance, you feel like you’ve cracked the code that no one else knows, and you’ve earned it. Rather than open and boxy, the rectangular-shaped space is like a wide, couch-lined hallway, with guests passing by three floating bars (not attached to a wall stacked with bottles) and enter the earth-toned, track-lighting lined Savøur.

The more futuristic Ømakase is hidden behind Japanese-style sliding doors, while test kitchen-esque Pøp – with deliberately placed kitchen appliances, books, and other artful, modern pops – is up the stairs behind another hidden sliding door. With an interior designed by Hiroshi Fujiwara – a Japanese musician, fashion icon and globally influential streetwear designer – and a lineup of chefs ready to take over both the Ømakase and Pøp menus rolling into next year, expect nothing but the utmost style during your visit.

Each trend-setting venue is distinct, happening, and downright cool on its own; together, it is one cohesive hub making up one of Shanghai’s most unconventionally hip hangouts.

The most important question is, what – or rather – who is still in the works, ready to be showcased as the next and trendiest display of modern cuisine?