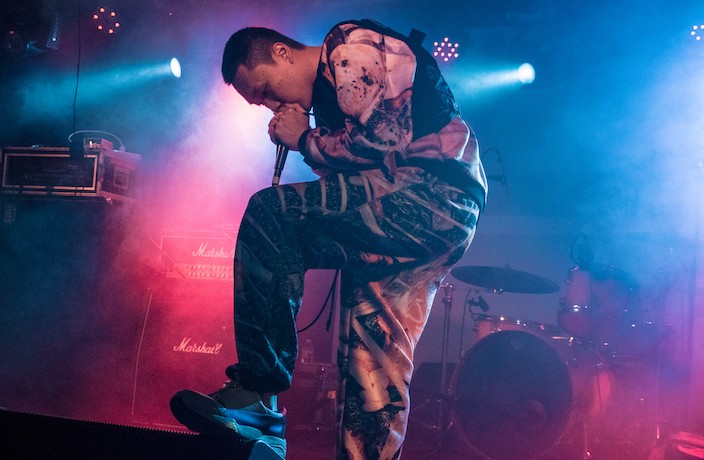 In just the past six months, Beijing-based underground rapper and vocalist Bloodz Boi has dropped a series of tracks that have captured the attention and imagination of listeners around the world. While he has teamed up with the likes of Organ Tapes, Darcy Baylis, YVNCC and Mixed Matches, trying out a multitude of new styles, Bloodz Boi is far from happy.

With a distant plan to leave the commercial plains of Chinese rap music behind and move to the US, Bloodz Boi’s social media presence, on sites like Twitter and Weibo, has been off the charts. With a split EP with YVNCC set to drop in the coming months, and a shoegaze indie album with Australian musician Darcy Baylis also not too far off in the future, Bloodz Boi is a name you will certainly be hearing more of. Here he tells us his thoughts on China’s underground rap scene, his favorite type of music and more.

You came up with Puzzy Stack in the Beijing underground bass scene helping to found S!LK club nights. How much involvement do you have with S!LK these days?
Me and Puzzy have been friends since we were kids. I told him about this underground music scene and he’s doing really well now. He is DJing and promoting and right now he is a really famous underground DJ in China. When I began to focus more on my music, I didn’t have as much time to spend on promoting shows or booking artists anymore. Me and Puzzy have the same taste in music, and sometimes I’ll recommend an artist to him and he will try to book that artist in Beijing. But right now, Puzzy Stack is 100% in charge of S!LK.

As a heavily tattooed rapper in China, how much more difficult is it to operate?
I never wanted to be fake; I don’t fuck with that. I think I’ll never perform at something like a music festival, because the organizers of those events need to check your lyrics, your ideas blah blah blah. And because I am not an idol, I don’t have fans who can pay RMB100 to go to a show to see me.

Right now underground electronic music is getting stronger, but DIY rap is struggling. Why do you think that is?
China doesn’t have an underground culture. It’s not the real underground, it’s just people fucking around. I create my music, I can say that I’m the king of underground rap, but what can I get, more followers on Weibo? The mainstream doesn’t like me, and my listeners don’t want to pay for tickets to go to my show.

Your releases have followed a lot of different styles. You make trap, emo rap, dancehall and you have plans now to drop a shoegaze album with Darcy Baylis. How do you choose the style of music you release?
I am very confused right now. I don’t know what I should do. I have a lot of producers who are getting in touch with me; people I never thought would want to produce my music. All of these producers make different kinds of music, though. I can sing, I can rap on every type of beat. It’s a problem to me, because I don’t want to be an emo rapper. I want to find more. My followers in China love that so much; they know me as an emo rapper, but I almost want to delete all of my emo rap songs from my Netease and Xiami accounts. Now I want to try some new trap music. With Darcy, that’s a side project, so I think I can only do that once. I have more opportunities with trap music.

You said on Twitter a while ago that you have a lot of unreleased tracks that you are waiting to drop. You have the EP and album on the way (both unnamed, as of now), can you tell us more about those?
The EP is almost done. It’s me and YVNCC; it’s kind of like experimental trap. The music is trap, but the melody is totally weird I think. We tried to do something fresh. The EP will have six songs, and we’re still deciding on the name. The album with Darcy is an indie rock, shoegaze album that will have six or eight songs. We’ll release a track before the album comes out and we’re working on the single for the album now. That’s my side project. I’m also influenced by rock music a lot and I really wanted to sing over a guitar. Darcy can play a pretty good guitar melody, so I just put my voice over it.