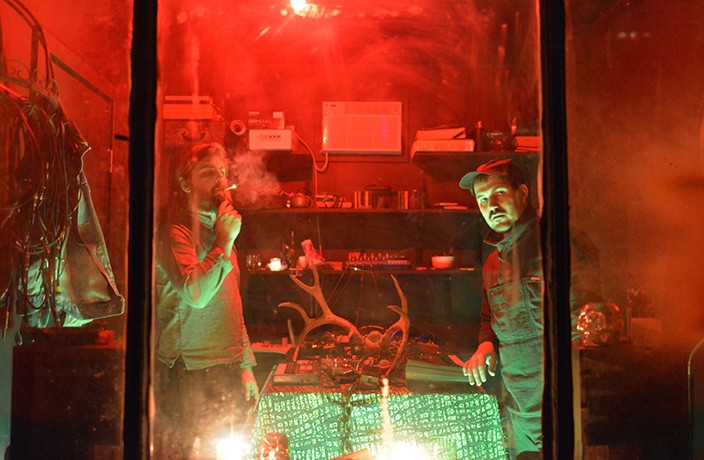 Dark isn’t the best adjective for describing the sound and energy of Robedoor. The Los Angeles-based ‘occult industrial drone’ duo Robedoor, formed by Britt and Alex Brown, are coming up on 20 years of psychedelic, process-oriented experimental electronic music. Before they embark on their full-scale China tour this month, Britt tells us about corn chips in cough syrup and cauldrons of black broth.

First off, what does ‘occult industrial drone’ mean?
Drone and industrial music are the cornerstone modes Alex and I bonded over when starting the band. Drone is about volume, immersion and hypnosis, while the industrial aspect refers to instrumentation and the bleak, blasted and metallic mood. The occult dimension is more about process, treating sound and performance as ritual rather than recitation.

How did you guys meet and what does Robedoor mean?
We met in 2001, when Alex moved to LA for college. After school, I started a record label with my girlfriend and played in some bands, but was looking for a project that could explore darker and noisier types of sounds. I knew Alex to be a fearless dude and fan of experiential performance so I proposed we collaborate. In February 2005, we started recording, and we’ve never stopped.

The name comes from a mythical Pacific Northwest street drug a friend once told me about that involves soaking corn chips in cough syrup and smoking them through a bong. Never met anyone who’s verified its existence but it sounded both mystical and degenerate, which quite accurately evoked the vibe we were envisioning for the music.

You’ve got an expansive discography. How has your sound changed over the years and what are you doing differently now?
There’s been three main eras of the band. The first was 2005 to 2008, when everything was improvised. We’d hang a microphone from the ceiling and jam different arrangements of trashed ceremonial instrumentation, recording every session and picking our favorites for limited tapes and CDs on whatever label was interested. Back then, we never overdubbed or played something twice – the whole point was to capture the raw unhinged moment in all its mess and intensity. 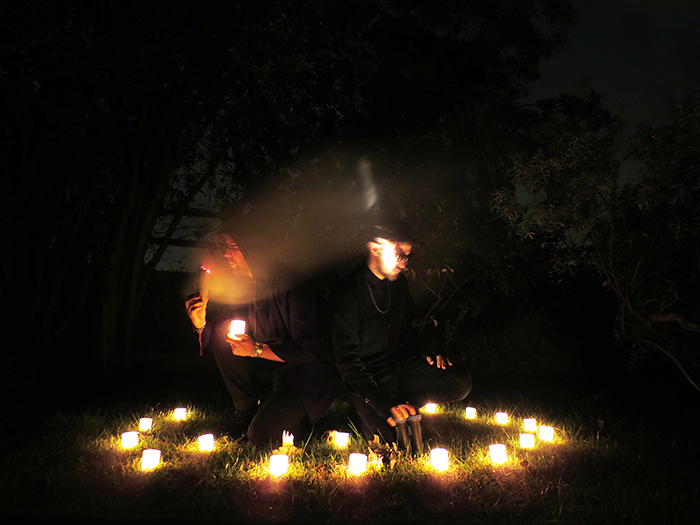 For our 2008 East Coast summer tour with Pocahaunted and Woods we schemed some music that was more song-like, with fixed loops and sections and vocal parts. When we got home, we had our friend Ged Gengras help record the album, and he joined the band during this process. We played as a trio for the next few years, shifting into more of an undead desert psych-rock sound, with a full drum kit and prominent guitars. The songs were still sprawling and loose and noisy, but there was structure. Ged left in early 2011, so Alex and I reformatted to drum machines and keyboards and loop units, which is how it’s been ever since.

What’s your creation process like?
Typically, I’ll make some percussion patterns on our drum machines and finesse them until they feel sufficiently heavy and hypnotic to sustain the weight of a Robedoor song. Alex will then design sets of loops that interlock with the rhythms. Once all that’s in place, we light incense and dim the lights and bask in the machines while we experiment with live keyboard parts, scraped metal, vocal howls, or whatever other frequency or texture speaks to us. It’s clichéd, but the songs reveal themselves as much as we actively write them. These days, most of our songs take years to fully solidify into their ultimate form. Even then, the album version is just one iteration of this shape-shifting entity we’ve been trying to bottle.

What do you want your sets to feel like or evoke?
An initiation into some arcane sect. Like watching two shamans summon an unknown presence from a forbidden dimension.

If there is one thing you want people to know about you, what would it be?
Music is about more than what it sounds like, and how the world responds to it. It’s about why an artist creates it, what they’re seeking in the process. Robedoor has outlasted a lot of phases and peers simply because our motivations aren’t external. The band is basically a hermetic order at this point.

If your music were a meal, what would it consist of?
A cauldron of blackish boiling broth.