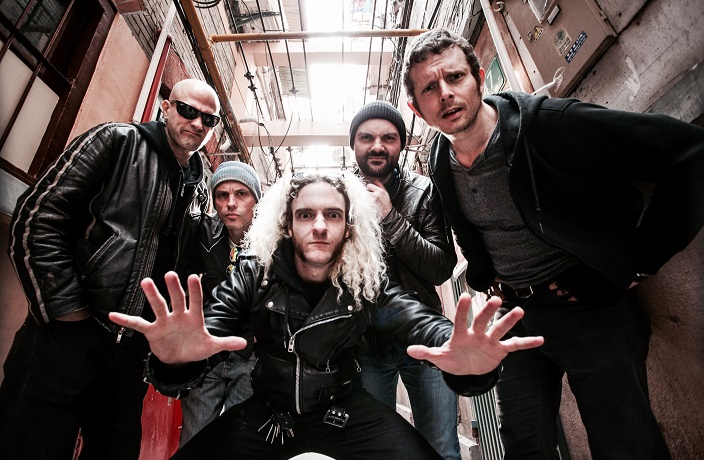 Having taken inspiration from their adopted Shanghai hometown for their self-titled debut album, freak-rockers Round Eye have the world on their mind for its follow-up.

“Socially, so much has happened since the beginnings of this record to now,” says frontman Chachy. “Trump, cops, wars, ISIS, the rise of redneck nationalism, Round Eye’s trip to North Korea, tours, new members in the band and video productions. Lotta runnin’ around.”

“It was so campy, so ridiculous and so American,” Chachy explains.“As a punk band, you don’t have to look hard to find things to be angry at these days. I mean, look at the alternate reality we now live in. I am from a country that has Donald Trump as president. Fact.

“So this album not only mimics the pop culture insanity of today’s world through the songs, but it’s also as if life on Earth is actually an episode of Monstervision, hosted by none other than the man himself – Joe Bob Briggs.”

To this end, Round Eye managed to get John Bloom to appear on the album. The record’s other guests include Duck Fight Goose’s frontman Han Han, SUBS frontwoman Kang Mao, members of The Psyders, and some Hooters girls from the restaurant’s Huaihai Lu branch.

Monstervision also features the last recording from saxophonist Steve Mackay (The Stooges, Violent Femmes), which was recorded in Beijing with producer and P.K. 14 frontman, Yang Haisong, a week before his last show at Shanghai’s On Stage.

“Steve loved Shanghai and the people of China,” Chachy says reverentially. “He had such a good time. He really loved doing what he did, and nothing would ever get in the way of that, not even death. He simply loved to play – and play with those he loved.”

Much has changed in the two years since that show. The group embarked on extensive tours of China, America and Europe (“it changed us so much, as we started to really just attack the audience”). Their music video for ‘Billy’ won praise in the American and European punk underground, including the seal of approval from Alternative Tentacles co-founder and Dead Kennedys frontman Jello Biafra (“you kidding me? Shit man, that’s awesome!”).

Chachy has used the group’s growing cache to bring punk legends like Mike Watt and MDC on tour to China. “Every artist we’ve brought here left a changed man or woman, for better or for worse,” he laughs. “But one thing is always the same: the surprise. They never accurately anticipate how China will be.”

The band itself has gone through lineup changes with Chachy raving that it’s “a match made in hell.”

“We all have the same sense of humor, have toured the world together and are all meat-eating alcoholics,” he cracks. Before they embark on a huge European summer tour, they’ll be playing a record release show at Yuyintang on April 21. Chachy promises it will be a good time.

“We’re confident, we strut and we aren’t pricks about it. We’re going to work now and we’re having fun at work. The studio is where we take the message in earnest but the stage is where we vent the frustrations,”he says.

“I used to hate the term ‘party band' but if somebody wants to think of us that way, then we must be doing something to provide a good time. Isn’t that a good thing?”