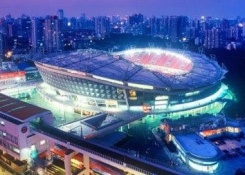 Built in 1999 and with a capacity of 33,060, Hongkou Stadium is a bit of a beauty, even having the honor of hosting the 2007 Women’s World Cup Final. It hasn’t sold out for Shenhua games so far and, despite the Anelka hyperbole, is unlikely to this season. It is still absolute mayhem on match day, but it shouldn’t take you long before a scalper is poking you in the eye with some tickets. Look to pay anything from RMB30-300 depending on seat position. Games are also almost all shown on TV on the Shanghai Sports Channel, but nothing beats the real thing.

The 10 Best Things to Do This Week in Shanghai...