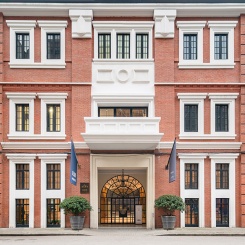 Lisson Gallery is one of the most influential and longest-running international contemporary art galleries in the world. Today the gallery supports and develops 60 international artists across two exhibition spaces in London and two in New York as well as its new space in Shanghai. Established in 1967 by Nicholas Logsdail, Lisson Gallery pioneered the early careers of important Minimal and Conceptual artists, such as Art & Language, Carl Andre, Daniel Buren, Donald Judd, John Latham, Sol LeWitt, Richard Long and Robert Ryman among many others. It still works with many of these artists as well as other artists of that generation from Carmen Herrera to the renowned estates of Leon Polk Smith, Ted Stamm and Roy Colmer.

17 Shanghai Art Exhibitions to Check Out This...

6 Shanghai Art Exhibitions to Check Out This...