Wallis Simpson was the woman who scandalized not merely high society, but the entire British Empire. When, in 1936, King Edward VIII proposed to the twice-divorced American socialite, it triggered a constitutional crisis that led to his abdication. He became the first and – to date – only British monarch to relinquish the crown.

So what was Simpson’s secret? How had she enticed Edward off his throne? If rumors are to be believed, it was with aid of a trick learned in the brothels of the East.

In 1935, as her affair with Edward – then Prince of Wales – became serious, it is said that the British Intelligence Service MI6 compiled a dossier on Wallis at the behest of British prime minister Stanley Baldwin.

The most enduring story, however, is that Wallis perfected what is known in turns as the 'Shanghai Squeeze' and the 'Singapore Grip,' which enabled her to contract the walls of her vagina to an extraordinary degree.

She had, apparently, "the ability to make a matchstick feel like a Havana cigar." Whether this was actually the case nobody knows; most historians and biographers dismiss the existence of the China Dossier, and nobody has ever claimed to see it. 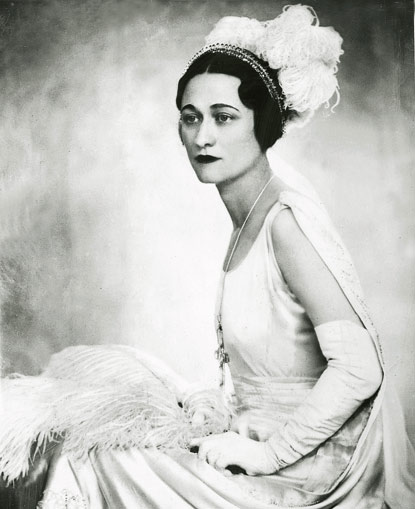 The beauty that brought a king to his knees

The truth about the brothel visits, however, is almost certainly a lot darker. Win was not only an alcoholic, but abusive with it, and while posted in Canton (modern day Guangzhou) he beat and kicked Wallis so severely that she suffered internal bleeding and became violently ill.

Back in Hong Kong he was remorseful, but this time it was not enough – Wallis had been through the cycle of violence and repentance before – and she told him she would seek a divorce.

By all accounts Win flipped, and any pretence of keeping the violence behind closed doors was gone. He would forcibly drag Wallis along on his brothel visits, making her watch as he kissed and groped the prostitutes, threatening to kill her if she complained.

Her escape came in late November, when she learned a friend from America, Mary Sadler, was traveling from Hong Kong to Shanghai on an overnight liner. She hastily packed up her things while Win was at work and joined her.

In Shanghai Wallis looked up a British diplomat friend, Harold Robinson, who escorted her to cocktail parties, turf meets at the Shanghai Race Club and dances in the sunken courtyard of the Majestic Hotel. An Italian diplomat remembered Wallis from her time in China:

"Her conversation was brilliant and she had the habit of bringing up the right subject of conversation with anyone she came in contact with and entertaining them on that subject."

Another who encountered her was not quite so flattering in her recollections. According to Hui-lan Koo, the second wife of Chinese diplomat and politician Wellington Koo, the only Mandarin phrase that Wallis learned during her sojourn in Asia was, "Boy, pass me the champagne."

"No doubt about it, life in Shanghai was good, very good, and, in fact, almost too good for a woman," is how Wallis would later recall of the city she found herself in.

The scandalous rumors don't end in Shanghai, but follow her up to Beijing, where she also traveled. Stories of working as a spy – for the US and the Soviet Union – illegal gambling rings, fronting opium for Chinese gangs (as well indulging in it herself) and appearing in a set of saucy postcards, posing in nothing more than a lifebuoy.

All, it would seem, were detailed in the elusive China Dossier. They have become the stuff of fiction, quite literally - author James H Irvin having penned a thriller, Mokanshan: A Tale of Wallis Simpson's Naughty Shanghai Postcards, as well as being perpetuated Charles Higham in his The Duchess of Windsor: The Secret Life.

"It is a fascinating subject of conjecture, impossible to authenticate at this stage,” writes Higham, adopting a never let the truth get in the way of a good story approach to the art of biography.

After six months in Beijing – "collecting jade, playing bridge and conducting several love affairs," according to author Paul French – Wallis returned to Shanghai where she fell ill, adding one last rumor to her Chinese chapter.

This time it was whispered that she had had a love affair with Mussolini's son-in-law and Foreign Minister, Count Galeazzo Ciano, and become pregnant, leading to a botched abortion that left her unable to conceive. The story was widespread, but never substantiated. Ciano's wife, Edda Mussolini, denied it.

"It certainly is wrong that she had an affair with Ciano, though some still claim it even when I show them Ciano’s first entry to China was six months after Wallis' exit," says French, before revealing it is a good old-fashioned case of mistaken identity: "Her actual lover was a far more educated and erudite Italian navy captain called Alberto di Zara."

By September 1926 Wallis' time in China had come to an end and she was back in the US. Her days of causing controversy, however, were in no way behind her... 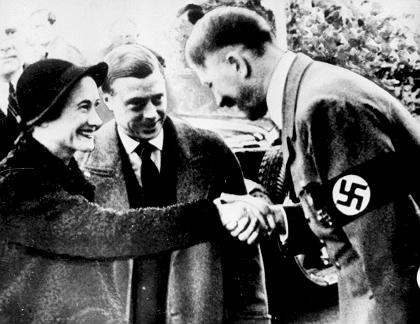 Simpson and Edward, as the Duke and Duchess of Windsor, meet their friend Adolph Hitler, 1937

[All images via Wiki]