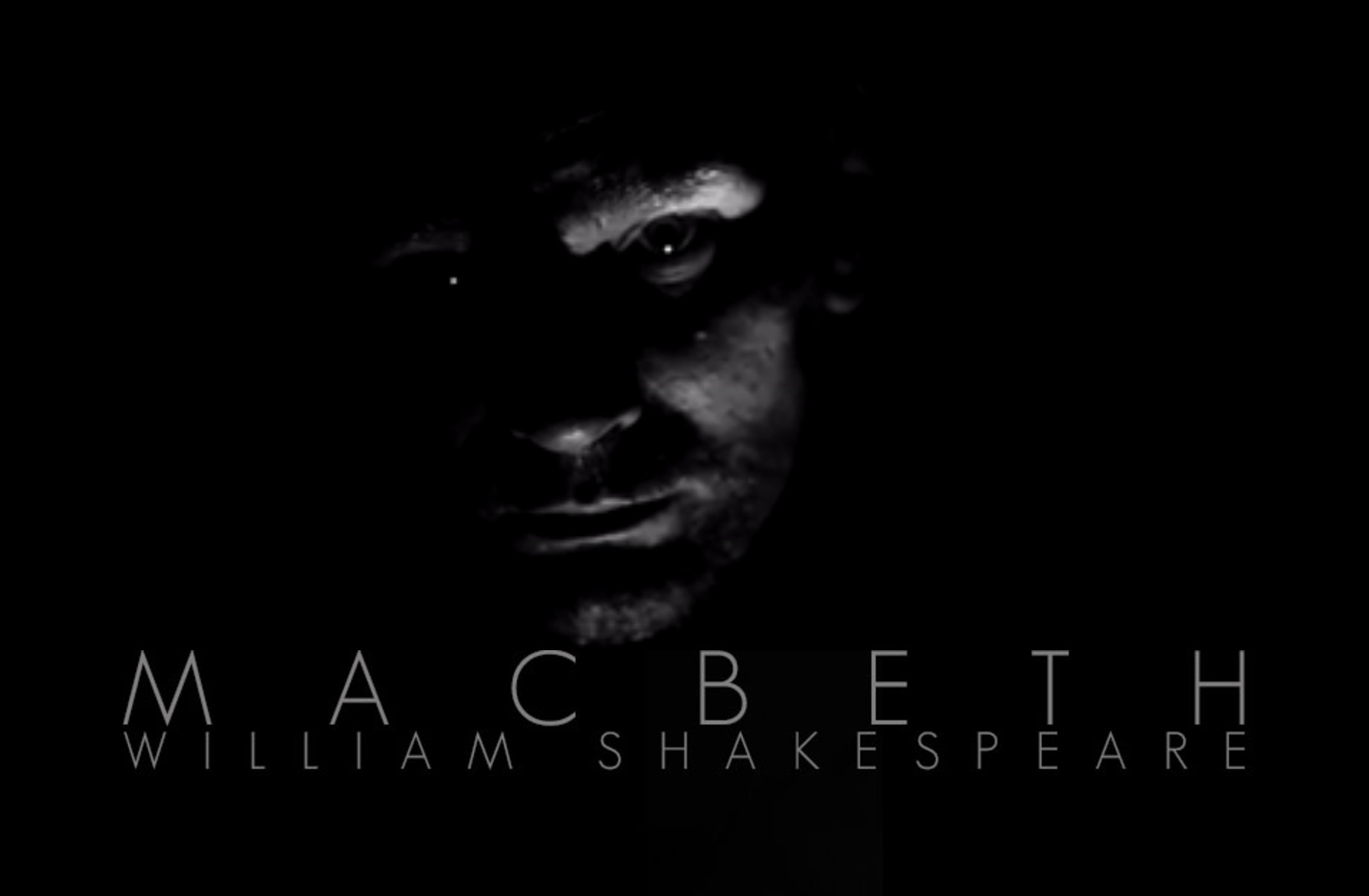 Englishman William Mann's one-man performances are both his debut in Shenzhen and also a return to his first passion after a long hiatus.

Mann moved to Shenzhen in 2010, and has been teaching English ever since. He has a long and rich history as a Shakespearean actor and director in Europe: he devoted six years of his life to running his own company, staging Shakespeare and more in countries including Ireland, Norway, Italy, France and the UK.

Listening to him talk about theater and Shakespeare shows a fascinating journey through what is, for many of us, uncharted territory.

Shakespeare is the kind of writer who can scare a non-attentive audience and terrify actors, yet he can be extremely modern and versatile. What's your approach? What should people expect from your performances?
Let's strip the play Macbeth down to its bones. Three witches tell Macbeth he will be king. He doesn't know what to do, Lady Macbeth convinces him to kill the king. He stabs the king while he is sleeping. Afterwards, Macbeth has hallucinations. He hears voices.

How could anyone not be impressed or intrigued by such a story? That is Macbeth. That is Shakespeare.

Many people studied Shakespeare at school and (understandably) hated it, or they fear the language, or the very name ‘Shakespeare’ scares them away.

But no one can deny the power of that story. I must do everything I can to tell that story in the best way I can. I must move that story along as swiftly as I can. There can be no dull moment. The pace must be relentless, seizing the audience's attention from the very first word and only releasing them when the last word is spoken.

Just as a friend tells us a story in a bar, we want it told succinctly and well. Anything that gets in the way of that story must be thrown away, any scene or character that interferes must be discarded.

So this production strips Macbeth down to that story. Every element of design, staging, word, gesture, movement has been refined. A red carpet is the stage, there are no special lighting or sound effects. So the story can be told in its purest and rawest form. To cut away all fat and get to the meat and the bone. 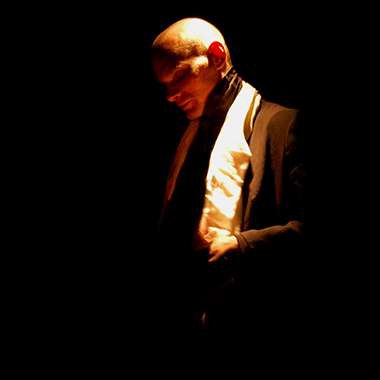 What are advantages and limitations of being the only performer?
The secret is never to think of a one-man Macbeth as a compromise, as a weakened, lesser imitation of the original. This one-man Macbeth is a portrait, allowing a focus on small details that are lost in a landscape. In the play, there is a scene where a general commands his soldiers to cut down some branches and carry them to disguise their number as they march, then we have another scene where a messenger tells Macbeth that he saw a wood moving (all to fulfill one of the witches' prophecies). A normal production would show these scenes and there would be no challenge to find a more creative way.

But for a one-man show, one must be more inventive. Therefore I have Macbeth himself actually behold the wood moving — of course the audience sees nothing (they wouldn't see anything in a traditional production either). What in the original takes two scenes, 12 actors and 34 lines, I can do with one actor in six words.

Considering how crowded with characters Shakespeare's plays are and how thick and multi-layered plotlines can get, what has your main difficulty been in reducing such complexity into an one-man performance?
This is the fourth time I have directed and played Macbeth. The first was in Oslo, 2004 (nine actors), then Paris, 2004 (five actors), Edinburgh, 2007-2008 (three actors) and now Shenzhen. You can see the pattern. Each production has been like an object lesson in what is inessential.

From the very beginning with this version I knew the stage, props and costume I wanted: a simple red carpet, wooden staves and candles, and the actor barefoot in a black costume with colored scarves to denote characters. I knew what I wanted to conjure in the mind's eye of the audience: a passion play of the trial, suffering and death of Macbeth.

I do not perform Macbeth as an actor taking different parts and talking to himself on stage, as a pale imitation of an orthodox production. I pursue a different reinvention of what each character is. For example, what is Macbeth really seeing and doing when he fights Macduff? 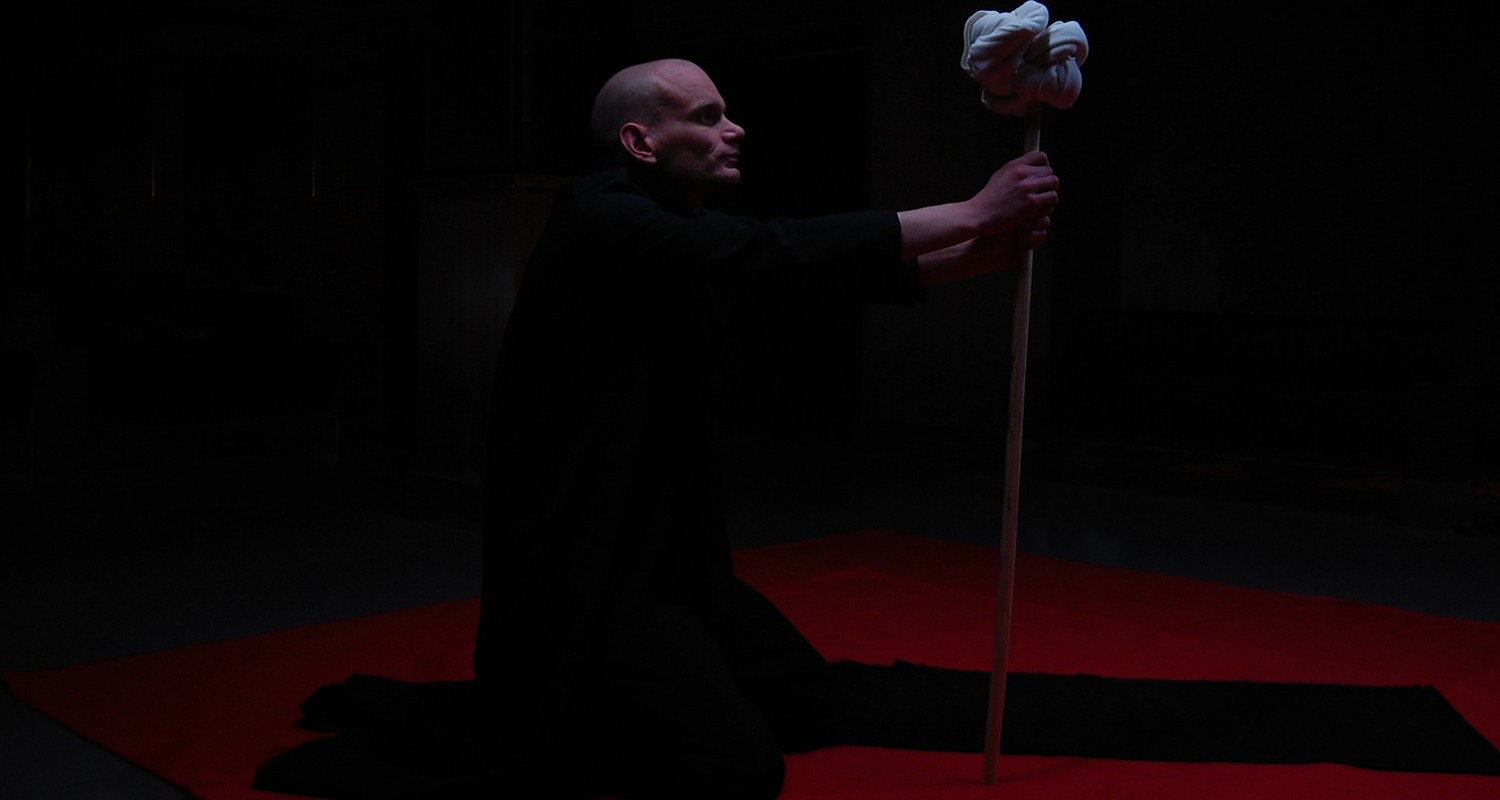 Why did you decide to start with Macbeth? Do you think his internal struggle better suits the work of a one-man performance? Hamlet is more famous, but as a character he has a richer social life, albeit tainted, without which he might lose his edge…
The plan is to perform Hamlet, Macbeth, Othello and King Lear as one great Tragic Cycle. The most important thing for me is to justify why there is only one actor. For Macbeth it is the idea that the witch(es) begin and end a ceremony. Of course, this won't work for Hamlet.

So I need a new way in. And for me this is the ghost of his father. The ghost comes from Purgatory. So I like the idea of Hamlet also being caught in Purgatory, doomed to remember and re-enact his life over and over again. He can't undo or change it, he can't correct his mistakes or stop his cruelty, he is forced to relive every detail of the pain and misery he felt and caused.

Macbeth dies fighting a man he knows he cannot kill. It is an act of defiance. But Hamlet is slowly dying of poison and he begs Horatio to tell his story, he wants the truth to be known. Hamlet is responsible for the death of seven characters in the play, including his mother and Ophelia. At the moment of his death he must know this. What would it be like to come back and see them all again? So why not make Hamlet the one to tell his own story. He can never escape. That is his punishment.

As for King Lear, at the end of the play, when Lear holds the dead Cordelia in his arms, he cannot see or recognize anything or anyone else. His mind is utterly broken. So for me, the way into Lear is through his mind at the moment of his death. To go backwards from that point and begin there, where his madness first explodes, in the middle of the storm. And everything that happened before can come out in fragmented torturous memories. Let's not forget too that Cordelia is ‘cor-de-lear,’ the heart of Lear, so when Lear banishes her he actually breaks himself.

And King Lear’s descent into madness is also highlighted by the Fool's antics.
It's interesting you mention the Fool. Fools always had a marotte (the prop stick with a carved head). When I do King Lear I will have Lear interact only with the marotte. In the storm, Lear uses two stools to represent his daughters at a mock trial. He can see what no other character on stage can see. He cannot distinguish between reality and his fantasy.

The secret of theater is that you don't have to see what an actor sees in order to believe him, you just need to believe that the actor sees what he says he sees.

Your show is emerging as one of the most original in Shenzhen. How have people's reactions been so far? Do you feel you are on the right path?
I think Shenzhen encourages you to be original and try new things which maybe before, you never would have done. Would I have thought of doing this if I were living in a city with a longer tradition of theater and Shakespeare? I'm not so sure. But living in Shenzhen convinced me to try something new and begin this.

But the reaction of the audience, from both those who know the play and those who don't, has been positive and encouraging. The simplicity of the staging and story makes it very easy for an audience to follow what is happening. Every decision and interpretation I have made about the play has been done with respect. This has convinced me to continue with the other three plays in the Tragic Cycle, which will all premiere in Shenzhen. 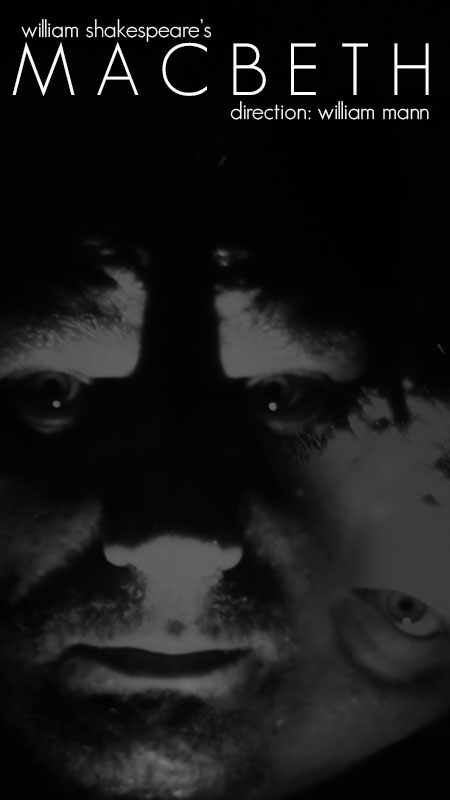 For more information about Mann and future performances, see his website here. 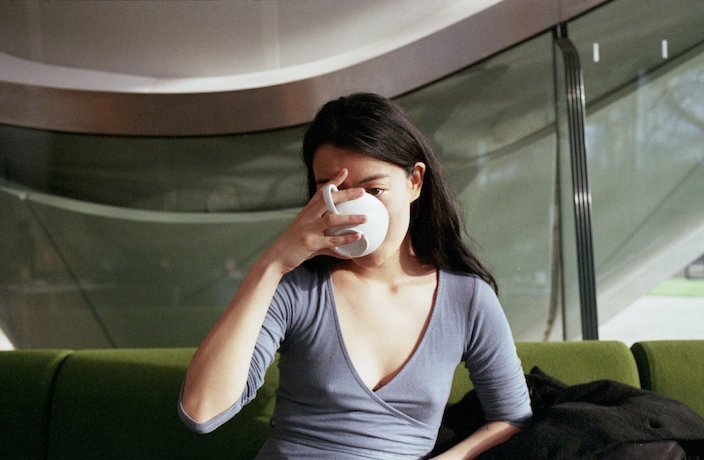 Object Blue talks Shakespeare, Techno and Growing Up in China

“Out of all the things in my life, my Chinese and Japanese background is the thing that influences my music the least.” 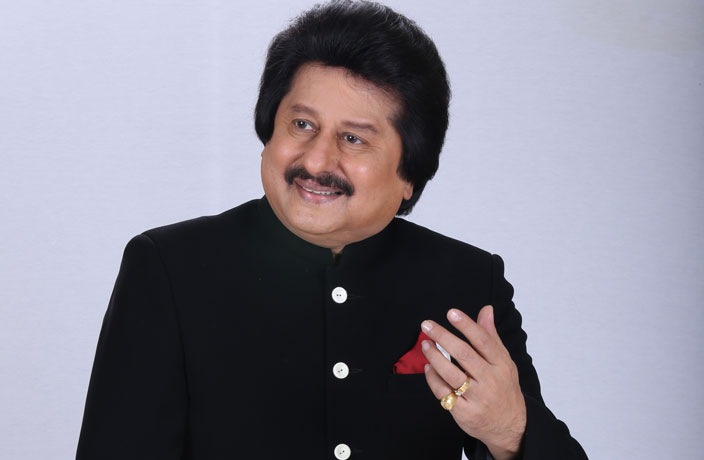 Plus a mind-blowing post-psychedelic rock opera.

Dirty Fingers don't seem to adhere to any of the traditional notions of what an indie band in China should be. They've also been to jail.

Catch these Shenzhen favorites as they return to the PRD for two sonically satisfying sets.