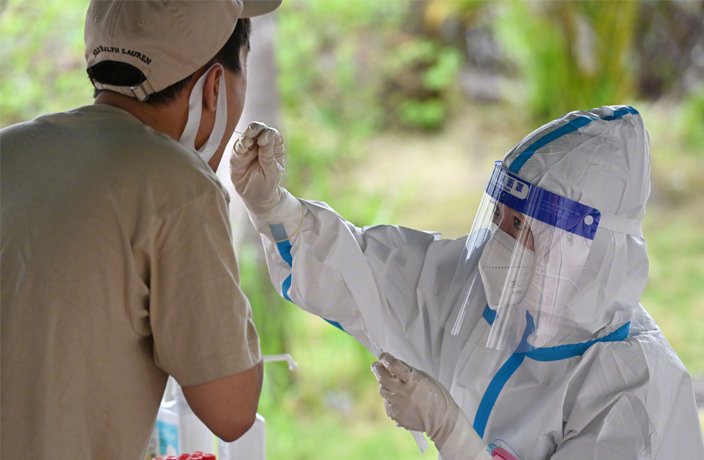 Eleven confirmed cases of COVID-19 (nine symptomatic and two asymptomatic) were discovered in Shenzhen today (Monday, August 29, 2022), triggering the closure of 24 metro stations and a lockdown of some Futian and Luohu subdistricts.

It was originally reported by local media earlier today that only three subdistricts in Futian would go into lockdown (Yuanling Street, Huaqiangbei North Street and Nanyuan Street).

However, as of 2pm today the both Futian and Luohu districts (aside from Yuanling Street, Huaqiang North Street and Nanyuan Street, which are fully locked down) went into a partial lockdown.

Guiyuan, Nanhu and Sungang subdistricts in Luohu have also gone into full lockdown.

Both districts have ordered the closure of all businesses, including KTV bars, massage parlors, bars and restaurants, pool and mahjong halls, cinemas, gyms and internet cafes, etc.

Residents in the Futian and Luohu subdistricts mentioned above have been ordered to only leave their homes to undergo regular nucleic acid tests.

One person from each household is permitted to leave once every two days to buy groceries if they have an “access card” and a negative nucleic acid test issued within 24 hours.

Takeout delivery services (waimai) and postal services (kuaidi) are temporarily prohibited from entering residential communities in both districts (but restaurants are still operating a take-out-only policy).

Any items delivered to your home will have to be collected from designated lockers or the entrance to your community.

If you’re unable to leave your home, communicate with your residence’s management as to how they should be collected.

Schools in many areas have closed and switched to online teaching.

Businesses in both districts have been advised to close and switch to a work-from-home policy.

The above measures will remain in place until midnight September 1, however, this could be extended if the spread of the virus is not controlled.

It was also announced today that the following metro stations have also been closed:

Bus routes passing through subdistricts in Futian and Luohu have also been altered.

Seven of the newly confirmed cases were discovered in Futian, six of which were close contacts of a COVID-19 patient, while one was in direct contact with said patient.

Two cases were discovered in Luohu through regular testing while two more close contacts were found in Longhua and Nanshan.

Shenzhen has some of the strictest COVID-19 measures in place in the whole of China, with negative nucleic acid tests issued within 24 hours necessary for entry to all public places.

That’s has also been informed that some Beijing residents who have travelled to Guangdong have been told via the Beijing Health Kit app that they are temporarily prohibited from returning to the capital.

The Beijing Health Kit app telling the capital's residents that if they are outside of Beijing they are temporarily unable to return. Screengrab via That's.