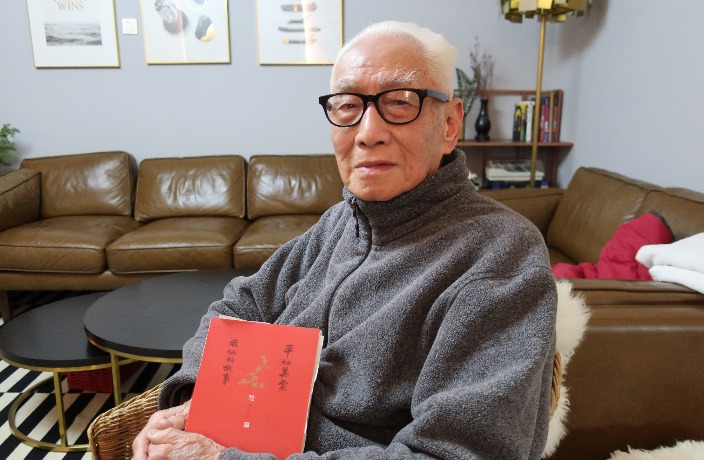 Ahead of his appearance at the Shanghai International Literary Festival this month, we caught up with Rao Pingru to learn more about his memoir. He'll be presenting a session on March 20 at 12pm.

“Meitang was a very traditional woman with a strong personality. Even when her health wasn’t so good, her willpower never wavered,” Rao Ruping says in Jiangxi accent-tinged Mandarin. For someone who’s 98 years old, he is extremely articulate, especially when sharing stories about his wife of 60 years, Mao Meitang, who passed away 11 years ago. “She was very practical and realistic, whereas I’m more of a dreamer.”

We’re sitting in the apartment of his fourth son’s family in Changning district, with whom Rao’s currently living. Nowadays, he spends his time practicing calligraphy, drawing, playing the piano and devouring volumes of classic Chinese literature. “I still think about [my wife] every now and then. When I see an old lady playing with a smartphone, I’d wonder if she’d be able to manage that if she were to be alive today. I live a pretty quiet life now, I’ve been through quite a lot already,” he says, adding that he’s “at peace” with everything that has happened. “Life is too short. I turn 98 this year… but it’s still not long enough.” 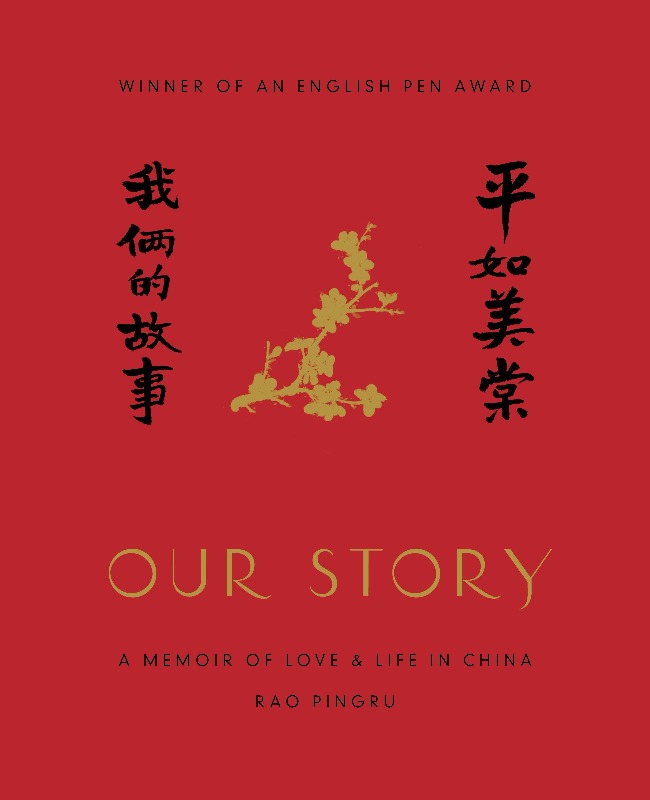 Cover of Our Story (English version). Courtesy of Rao Pingru.

The Nanchang-born writer and artist’s turbulent life is documented in detail in his 2013 illustrated autobiography, Our Story: A Memoir of Love and Life in China. Readers are taken through more than eight decades of time from his birth in 1922, to his life as a young soldier fighting against the Japanese, and later falling in love and starting a family with Mao Meitang when the war ended. After a few good years together, the young couple were separated by the government when Rao was sent to a re-education camp in 1958 due to his previous Kuomintang affiliation, where he spent more than two decades before his eventual return to his family in Shanghai in 1979. The story ends in 2008, when his wife succumbed to her battle with various illnesses that plagued the final stage of her life. 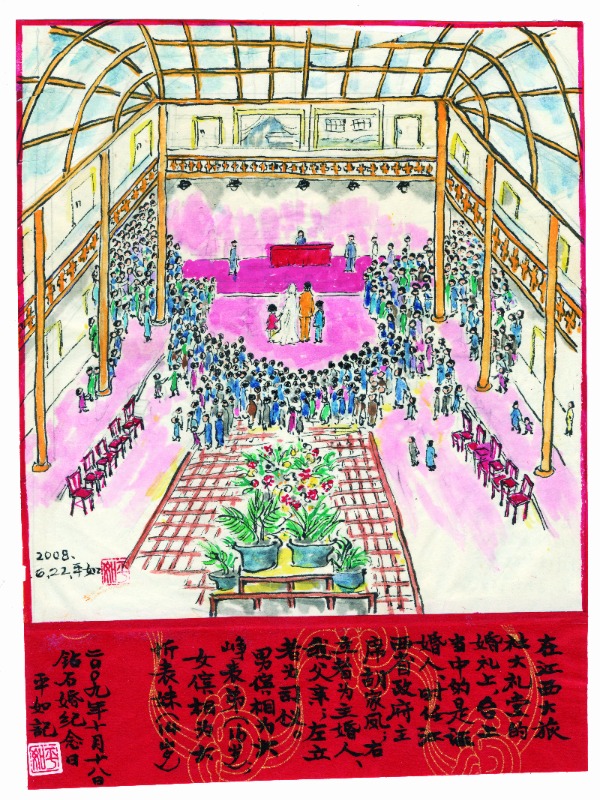 For Rao, the writing process was his way to mourn her death, and to celebrate their six-decade-long marriage. “I’d never thought I’d ever write a book until Meitang passed away,” he admits. “At first, I’d only wanted to record our precious memories with words and paintings for our children and grandchildren.”

During his free time, Rao began writing down bits and pieces of memories that came to mind at random, and adding illustrations to them. A few months into the process, one of his granddaughters who works as an editor at a publishing house came to visit him at his home. “I showed her one of my most recent paintings at the time – the wedding scene –  she took a picture with her phone and posted it on the internet. The internet is very cool; lots of people saw her post!” Rao says of the beginning of an exciting chapter of his life.

“Life is too short. I turn 98 this year… but it’s still not long enough”

For the months that followed, Rao was interviewed by various media outlets across the country, and even appeared on a CCTV program that brought his story into the homes of millions of viewers. Subsequently, a Guangxi-based publisher approached him with an offer to turn his words and drawings into a book. In collaboration with his editors, Rao added more content to fill in the gaps of the story, which eventually led to the initial release of Our Story in 2013.

Immediately, the feedback was overwhelming. Readers were not only touched by the couple’s sweet, loving moments at the beginning of their courtship and the sadness of his wife’s untimely departure in the end. Seeing their unwavering devotion to one another throughout all these years – even during the toughest challenges life had thrown at them as a result of one of the most turbulent periods in modern Chinese history – was the most captivating part of their journey. 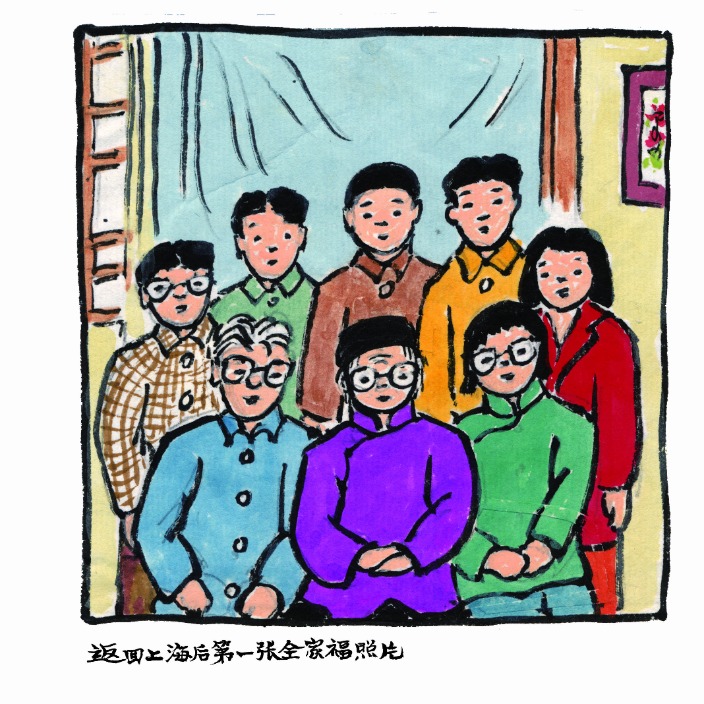 “Yes, it was very tough for us,” Rao says, recalling the harsh times he’d spent in a labor camp in rural Anhui from 1958-1979. “The only way for us to communicate was by writing letters. Meitang was very supportive of me during that whole time. She was always worried about my wellbeing, both physically and mentally. The first letter I got from her had a family photo attached to it. She had a smile on her face. On the back, she wrote, ‘Don’t worry about us, we’re doing fine. Focus on your re-education and we will see each other soon.’”

After its success in China, Our Story has since been translated into seven other languages, including an English version that came out last May. Back in 2017, Rao’s French publisher invited him to Paris for a publicity tour, where he was interviewed by various media outlets and held several talks about his work. It was on this trip when he realized a bigger lesson from his own story. 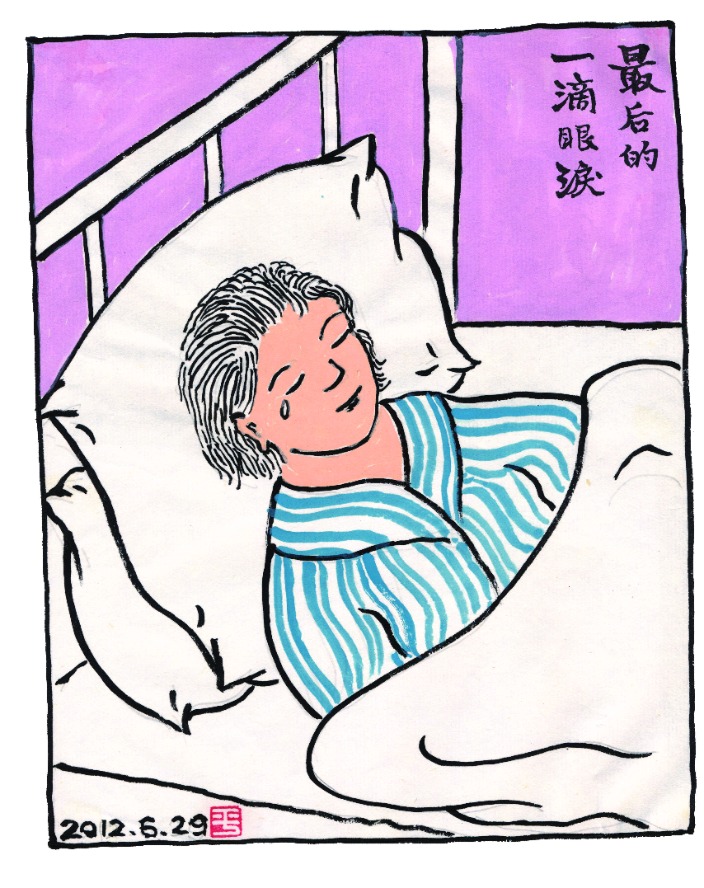 Rao's last memory of his wife. Illustrated by Rao Pingru.

“There’s a Chinese phrase, bainian xielao (百年偕老, ‘grow old together’), which we use as a blessing to newly weds. That was brought up in one of the talks, and I then realized the idea of being able to grow old with your partner is something that everyone longs for, regardless of where they are from. Young couples break up and get divorced very easily nowadays. Before making any rash decisions, they should think about the love that brought them together in the first place.”

When asked about the first thing he’d like to say to his wife when they reunite in heaven one day, Rao paused for a moment. The raindrops outside the window became deafening. “There are two people in my life that I have failed. One is my mother and the other is my wife. As a husband, I wasn’t even able to provide a stable life for her, where she could live comfortably and didn’t have to worry about putting food on the table for the family. For that, I’d like to say I’m sorry to her.”