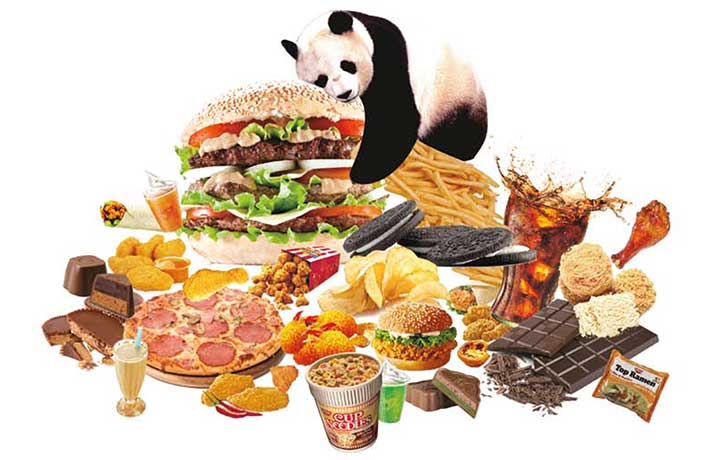 China was once considered one of the leanest populations in the world. As of the last three decades, however, that is no longer the impression. The country’s waistline is expanding. At an alarming rate.

A 2014 study by the University of Washington’s Institute for Health Metrics and Evaluation released in the medical journal The Lancet revealed that the Middle Kingdom is now number two for obesity in the world, with its number of obese residents outstripped only by the US.

There are some 60 million obese Chinese adults - more than nine percent of the world’s total obese population - and 300 million who are overweight.

The country's economic growth has no doubt been pivotal to the ballooning of its weight.

In the 1980s, just seven percent of Chinese were overweight. A decade later, as the economy picked up and cars, city living, television and fast food began to shape an increasingly Westernized lifestyle across urban centers, that figure had grown to 15 percent.

There are some 60 million obese Chinese adults.

In 2002, with disposable incomes far higher than ever before, 23 percent of the adult population was identified as overweight. That same year, China launched its first week-long campaign against obesity in Beijing, Shanghai, Guangzhou and Shenzhen, organizing lectures and free examinations to help more people understand the dangers of obesity. But the problem has kept getting bigger.

It’s a transition that has occurred in a disturbingly short time frame and in settings very different from those of Western countries, as Paul French and Matthew Crabbe point out in their 2010 book Fat China: How Expanding Waistlines are Changing a Nation.

If in the Western world obesity correlates with poverty, China’s weight problem is partly linked to what French calls a “wealth-deficit problem.”

The rural poor are still thin – though things are changing in that respect too - while the greater access to wealth in cities has led educated urban middle classes to spend more money on processed food and fast food. It is this demographic that is getting fatter.

“A lot of white-collar urban Chinese see branded and packaged food as a symbol of modernity,” says French. “They purchase it to display an international lifestyle.” In a country riddled with food scandals and safety concerns, however, processed food also can come across as more sanitized and risk-free.

“Following rapid urbanization and land speculation, wet markets in a lot of Chinese cities have been replaced by high-rises,” explains French. “Fresher ingredients have become less readily available, and what is out there is often perceived as unhygienic or sub-standard. Packaged food, on the contrary, is seen as a safe, less tainted choice.”

It’s a flawed approach to nutrition – processed meals often contain as much as three times the amount of oil, salt and sugar as regular, locally sourced and home-cooked food – yet it is one fast-food and processed food companies have been successfully banking on in China.

According to market intelligence firm Euromonitor, the ubiquitous fast-food industry generated revenue of USD94.2 billion in 2013, up eight percent from 2012. The total processed food market in the country is valued at USD140.4 billion. As of 2012, China has become the most rapidly growing frozen food market in Asia.

Setting the traditional Chinese diet aside, fizzy drinks, fat-laden ready meals and sugary temptations have been embraced as the more alluring option by many young Chinese.

Marketing and advertising, says French, have played a key role in this middle class assimilation.

“Mislabeling has often been used as a main strategy for food advertising in China,” he says.

“The Middle Kingdom has not yet enforced serious restrictions on food marketing, which means that companies can make all sorts of claims here that they couldn’t make elsewhere. Brands can declare to be green, healthy, organic and even sugar-free. No one checks on them.”

The power and influence such claims can have on consumers’ mentality are obvious – particularly when it comes to the younger segment of the population.

Although obesity is more of an adult phenomenon in China, children and adolescents aren’t immune. The Lancet study claimed that 23 percent of Chinese boys under age 20 are overweight or obese, while the figure for girls is 14 percent. Overall, about 120 million Chinese under 18 are considered obese.

And it starts very young. The Middle Kingdom perceives plump babies as healthy, and a rotund figure as a sign of wealth. The rising chubbiness among China’s little emperors is both a combination of cultural traditions and contemporary lifestyle.

In a report published in 2013, deputy chief of the Chinese Center for Disease Control and Prevention Liang Xiaofeng said the obesity rate of children under the age of five in Chinese cities had soared to 8.5 percent in 2010, up from 5.3 percent in 2005.

Cocooned by their grandparents, who are often their main caretakers, the pampered single-child generation is growing up on a diet of snacks and quick food, which is often used as a reward or a way to compensate for parental absence. 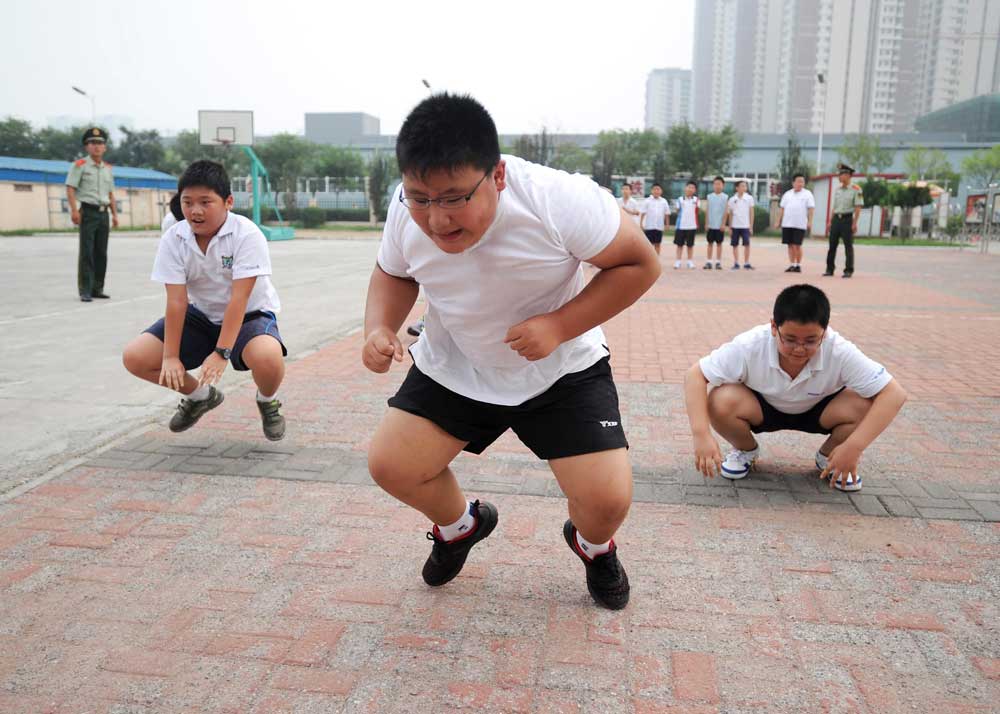 “It’s common for grandparents to spoil their grandchildren,” says French. “There’s a widespread culture of treats and incentives – the promise that if you do your homework until 11 o’clock you’ll get a Mars bar.”

Older family members often have little concept about what’s nutritionally valuable and what isn’t. Children are even more ill-informed. “For grandparents, sweet snacks are cheap and easy to acquire,” French points out. “And if a child is asked to choose between fruit or chocolate, he will of course choose the latter… that’s part of the problem as well.”

Changes in diet, however, are not the only culprit. The problem, French points out, is also fueled by the Chinese obsession with academic achievement, which leaves children almost no time for physical exercise.

Although schools are required to set aside at least an hour for physical activities every day, it is quite common to cancel gym classes to make room for other courses.

“Sport is only valued on a highly competitive level,” explains French. “So unless a child is in to win medals, parents aren’t interested in having him or her doing a discipline for the sake of it. Sport doesn’t get you to Harvard. For many, it’s a waste of time.”

The sedentary lifestyle children lead is hurting their health as much as an after-school meal at KFC. That of course extends into adulthood.

The country’s rising middle class is spending more time motionless in front of televisions, computers and video games. City streets, once crowded with bicycles, are now jammed with people sitting in cars.

In this oversized, fast-paced China where overweight is becoming the norm, an increasing number of individuals are resorting to extreme measures to drop a few pounds.

Weight–loss camps have sprung up in metropolises like Beijing and Shanghai to help Chinese children, teenagers and young adults get back into shape. Starting at around RMB30,000 for a six-week program, they promise to help battle pot bellies and tubby thighs.

But the consequences of China’s weight problem are far more serious than mere aesthetic issues.

The prevalence of excess weight and obesity has severe health effects, such as diabetes, cardiovascular disease and various types of cancer.

According to a 2013 study published in the Journal of the American Medical Association, China has the world’s largest Type 2 diabetes epidemic, with 114 million adults affected by the disease. That’s 11.6 percent of the adult population, a higher proportion than the US. In 1980, prevalence was below one percent.

"In China you see kids as young as 14 or 15 with Type 2 diabetes. They’ll likely live until they’re 80, but will have to be on medications for their entire life."

Moving forward, what that means for the country is a tremendous strain on the public health system.

“Diabetes is not a lethal condition,” says French. “Once you have it, you have to manage it for the rest of your life. That is expensive.

“While in Europe or the US people tend to develop it as their age advances, in China you see kids as young as 14 or 15 with Type 2 diabetes. They’ll likely live until they’re 80, but will have to be on medications for their entire life.

“And the public healthcare is supposed to be covering the cost. It’s a ridiculous situation that’s bound to come to a boiling point in the near future. It’s unsustainable.”

So far, the government has not been able to concretely face the issue. "They know they can only tell people to do some things before they get fed up,” says French. “So they’ve mostly taken a non-interfering approach.”

As it is, however, this semi-denial is not going to bring any good to the country.

“Dieticians and nutritionists are still scarce. Food education is far from entering the academic curriculum. While in most European countries it is illegal to build a fast food within 100 yards of a school, chains like McDonald’s and KFC are still allowed to open by school proximities,” says French.

It's a worrying scenario. As waistlines are growing faster than the country’s GDP, one has to wonder how much longer China will manage to keep its chubby little emperors happy.