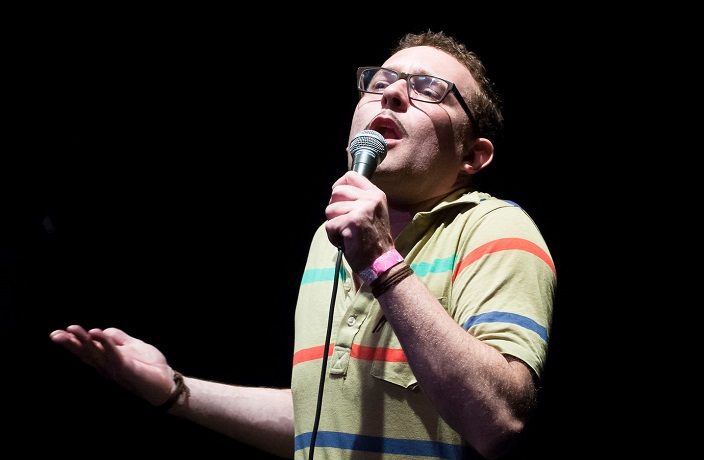 Congratulations on your upcoming China tour. Will this be your first time on the mainland?

It will be my first time in China, mainland or otherwise! The closest I've ever made it before was South Korea and the Philippines, so I'm very excited this time to finally get to see so much of the country for myself all in one whirlwind week. My goal is to meet everyone in China... we'll see how close I get.

Last year, you toured across America with Trump vs Bernie. How was the experience?
Trump vs. Bernie was an incredibly fun comedy tour, and I think it would have resulted in a better real-life world as well! Our fake comedy debate was a lot like a professional wrestling show, with Trump (Anthony Atamanuik) as the bad guy 'heel' and Bernie (me) as the good guy 'face' - but with witty debate remarks instead of bodyslams.

Do you think people will be seeing much of your Bernie in 2017?
The American election is over, so we finished that tour. But it looks like Bernie Sanders will be playing a high-profile de facto role as the opposition to Donald Trump, and who knows maybe we'll finally get the real Trump vs. Bernie debate we deserve in 2020. I think there's a good chance I'll be doing Bernie and his many percentages in the near future. In any case, Trump vs. Bernie lives on as a comedy album and three TV specials!

It's a pretty charged time politically in America. As a comedian, how do you approach political humor? Is it something you're fatigued with or do you feel like it's a comic's duty to touch on them?
I go through phases and waves. Last year was a very political year for obvious reasons, and I do think it's fun for comedy to address the issues of the day with profanity and innovative thinking. But also I love being silly and dumb sometimes, and there are also important things I'd like to joke about that aren't strictly 'political.' For example I'm gay and I talk about that in my standup act - dating men, cultural homophobia, etc. - but it's what I'd call more social commentary than politics.

Besides all that, sometimes I just like to be silly, or do impressions of public figures I find to be amusing. So in total I'd say there is a balance I aim for in comedy, where I address politics but that's not the sole focus.

As a comic, how do you tackle Trump who has lived such a ridiculous life?
Personally, as someone who was a kid in the 1980s, Donald Trump has always struck me as a larger-than-life cartoon character. It is still hard to believe that he will soon assume the role of president.

What was election night like for you?
I was one of the people who saw the dark possibility that he could win, but still election night was surreal. I'm never optimistic about anything, but it does seem like the world today is rich at least in the precious resource of absurdity!

I'm a big fan of Comedy Bang Bang and you've had some memorable appearances on it. What is it like guesting on these shows?
Comedy Bang Bang and other comedy podcasts are part of the 'new media' that let you as a performer connect with audiences and fans worldwide. There's a free atmosphere compared to television, with almost no content restrictions or gatekepers, but also almost no money paid to guests.

So podcasting as it is now, for me, is a great way to experiment and play around with characters and impressions with very few rules and maximum absurdity, and promote myself to listeners who might then find me on television or a live show. Plus you can get away with doing an impression of someone like Slavoj Zizek, which might be too obscure for TV audiences but perfect for the internet.

Besides stand-up, do you have any other projects that you're working on?
I work as an actor on many TV and film projects in the US, and I do voiceover work on a lot of cartoons. Currently I'm creating and producing two of my own cartoons with my writing partner John Roy for the FXX network, and there's always some new sketch comedy show that I'm trying to make.

China has budding stand-up scenes across the country. What advice do you have for people just getting into it?
Watch as much of it as you can, from China, the US and all over the world. We're living in insane times in many ways, but that is also when comedy is needed most. Luckily there are hilarious comedians from many countries, and dare I say it, many getting international attention and notoriety fueled by the internet audience like we've never had before in history. If the world can laugh together, we can live together.

Following your China tour, what are your plans?
I'll be back to work in Los Angeles on my many projects, and touring North America and beyond as often as I can. I believe I'll be taping a standup special later this year as well.

Is there anything you would like to add?
If people want to find some comedy stuff I've done, I have two albums available online: Low Hangin Fruit, my standup album from 2012, and Trump vs. Bernie, my fake debate with Anthony Atamanuik from 2016. I've also been on a lot of TV shows, cartoons and a couple of comedy movies like Hits from 2014, directed by David Cross. Beyond that there are hundreds of hours of podcasts and sketch comedy I've done that are out there on the internet!