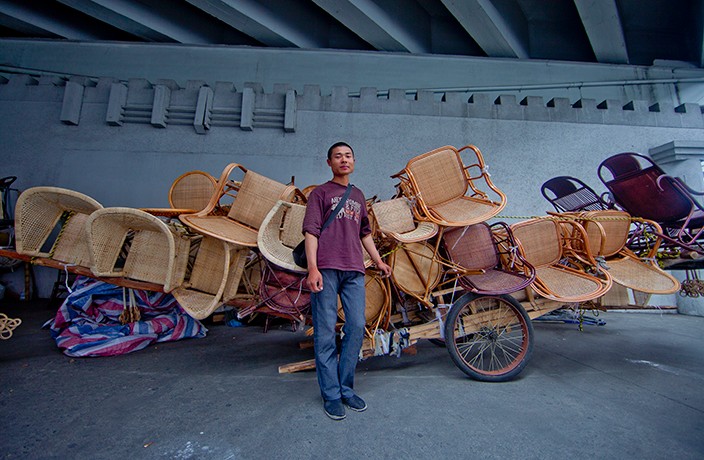 Chinese people have been kicking back and relaxing in rattan chairs for centuries. The wood seldom splinters, while the thatched seats stay cool in summertime and are soft on the derriere. The men walking through Shanghai’s old streets lugging carts piled gravity-defying high with these timeless furniture pieces lashed together have a thousand-year-long history too.

Twenty-three year old Wang Jincheng graduated from middle school in Qitaihe, a small village close to Harbin. He came to Shanghai in 2009, following his brother and sister-in-law who also sell chairs here.

“When I came here I began a life lived in footsteps,” Wang says. Wherever his cart goes is where he calls home. Presently, he’s living under a bridge in Putuo District with his relations. There’s a construction site nearby where they can get tap water. 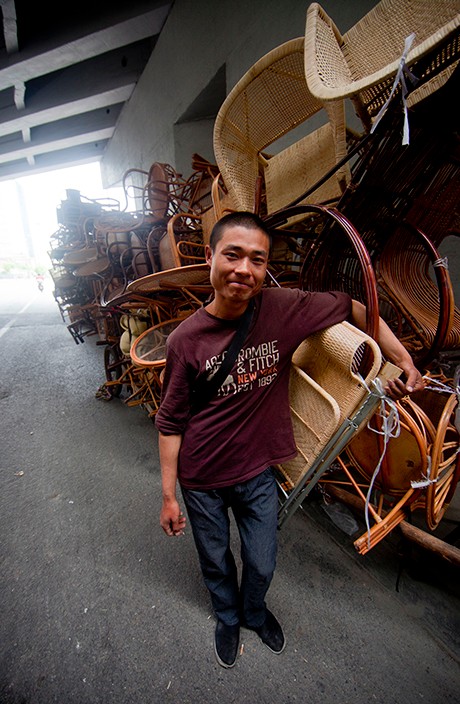 “I’ve walked almost every small lane in Puxi. You name it I’ve been there.” Wang says. “But in bad weather, I’ll cover my chairs under the bridge with a big cloth and listen to the raindrops.”

Business is best between May and August, when people are in the market for a nice chair to chill in. “I stay in Shanghai for the summer and go back to Heilongjiang in winter. Like the birds,” Wang laughs.

Wang’s three brothers and their wives are all in the chair business. Once a year they make a supply trip to Zhejiang, where chairs are made. Rattan is harder to come by these days, as are the craftsmen who make the chairs. “That’s why the price keeps rising,” he says. “Two years ago an average-sized chair was RMB50, now it’s RMB300.”

Wang pulls his cart seven days a week, weather permitting. He can stack the chairs five-high and fits about 100 on his cart at maximum capacity. “It’s very heavy. The whole cart with 100 chairs weighs around 400 to 500 kilos,” Wang says, “I usually eat a lot so that I have strength.”

He delivers for free – once he delivered a chair all the way from Putou District to Century Park in Pudong. “I left my cart on the street, asking some guard I know to keep an eye on it for me. When I got back everything was the same,” he says.

Wang’s clients are typically older people, but sales are unpredictable. Some days he sells nothing, some days he sells several. “The Shanghainese are very good at bargaining. They always ask for a lower price. In my hometown nobody does that. We just take it or leave it,” Wang says. “But generally I like the Shanghainese, they are more mild than people in my hometown.”

Wang’s dream is to make enough money to go back to Heilongjiang and find a bride. When he isn’t too busy pounding the pavement, he likes to watch the locals ballroom dancing in the park. “I can stand there watching them for two hours without moving a bit,” he says. “I so admire those dancers - making cycles one by one, like butterflies. They have so much freedom! I wish to dance like them someday.”