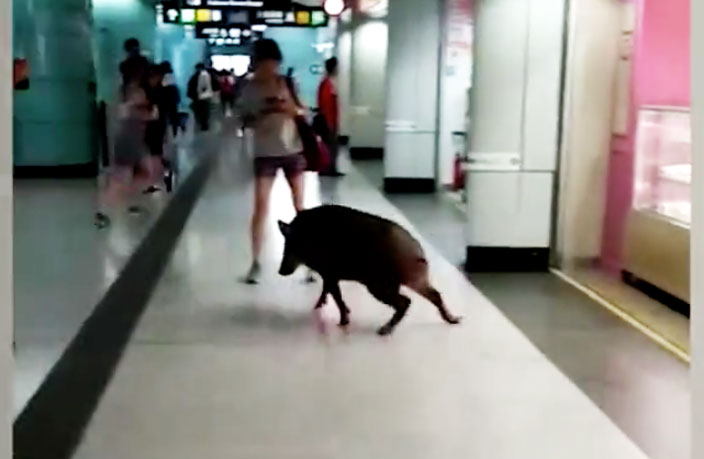 On Wednesday, June 19, a wild boar was seen running around Hong Kong’s Kennedy Town MTR station. One middle-aged woman suffered a minor leg injury from the meter-long pig inside the station and was sent to a local hospital.

According to South China Morning Post, security workers at the station approached the animal around 8pm. Officers from the Agriculture, Fisheries and Conservation Department (AFCD) rushed to the scene and helped chase the wild animal into a confined area. The boar was shot with a tranquilizer and carried off in a cage at about 9pm.

The boar was first spotted on Forbes Street before meandering into the MTR station. Based on video footage of the boar’s adventure underground, it had clearly sustained an injury, leaving a bloody trail along the slippery MTR station floor.

Watch below to see the boar walk around the station (VPN off):

Wild pig sightings have increased substantially in Hong Kong in recent years. According to figures from the local conservation department, there were 738 wild boar sightings and nuisance reports in Hong Kong in 2017, more than double the number of sightings in 2013.

These wild animals also have a reputation for wandering into the wrong part of town. In 2015, one feral pig busted through the ceiling in a Hong Kong mall, causing quite a scene for shoppers. 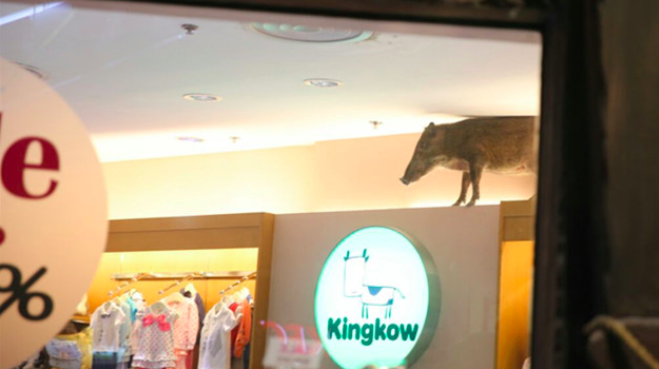 The Eurasian wild pig is known to be the largest native terrestrial mammal in Hong Kong, according to the AFCD. Adult pigs weigh up to 200 kilograms and can grow up to 2 meters in length.

What should you do if you see a wild pig? The AFCD encourages people to stay calm, leave the animal undisturbed and, if necessary, hide behind a large object and wait until the wild animal passes. While in Hong Kong, if you do come across a wild pig that poses a serious threat, call 999 for emergency assistance.