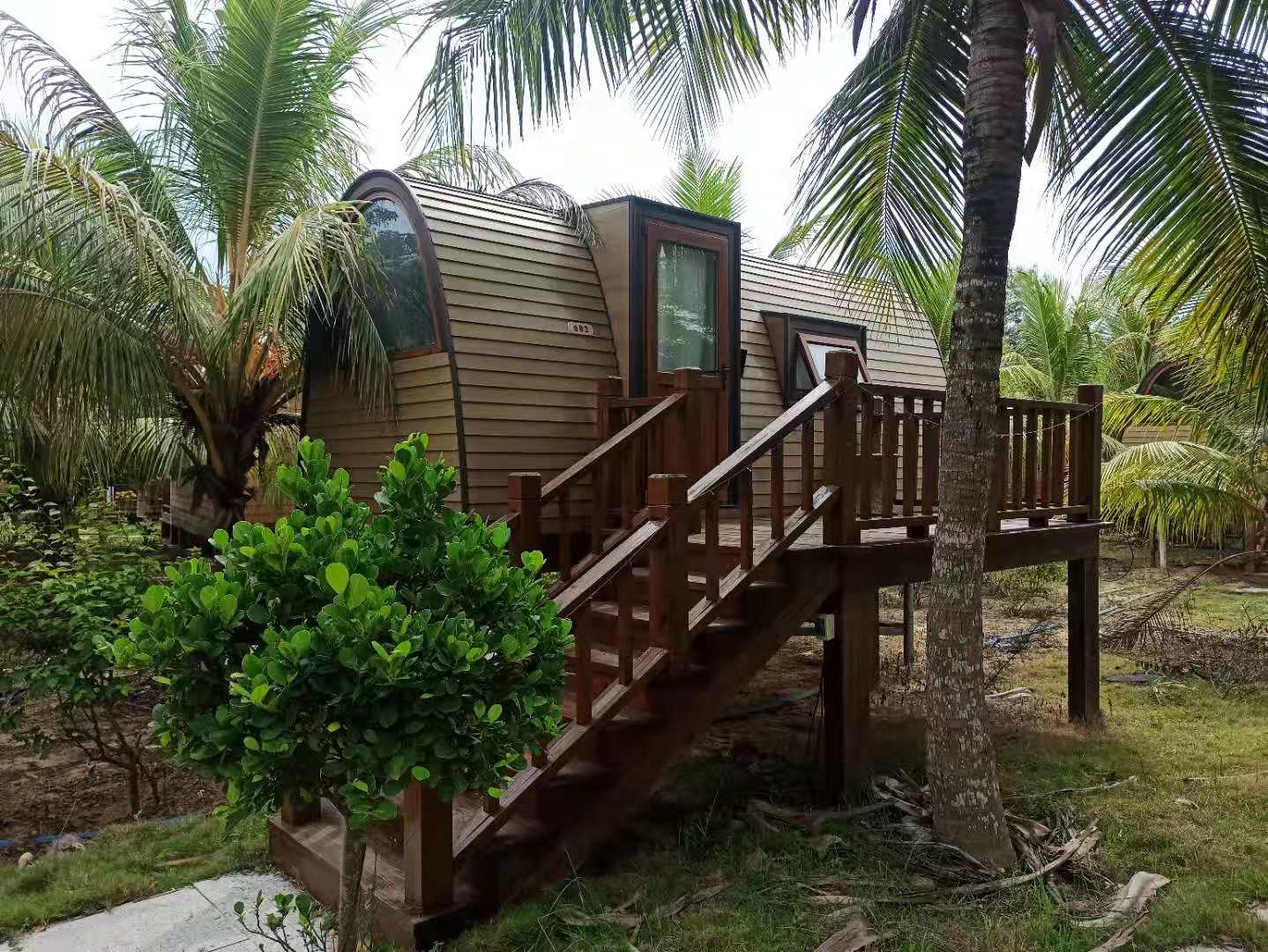 There are so few places in Hainan that just make you feel like you're on an oasis, far away from the bustle of city and tourists, but we found it for you. It’s hard to keep a secret because it’s so rejuvenating for a traveling heart. 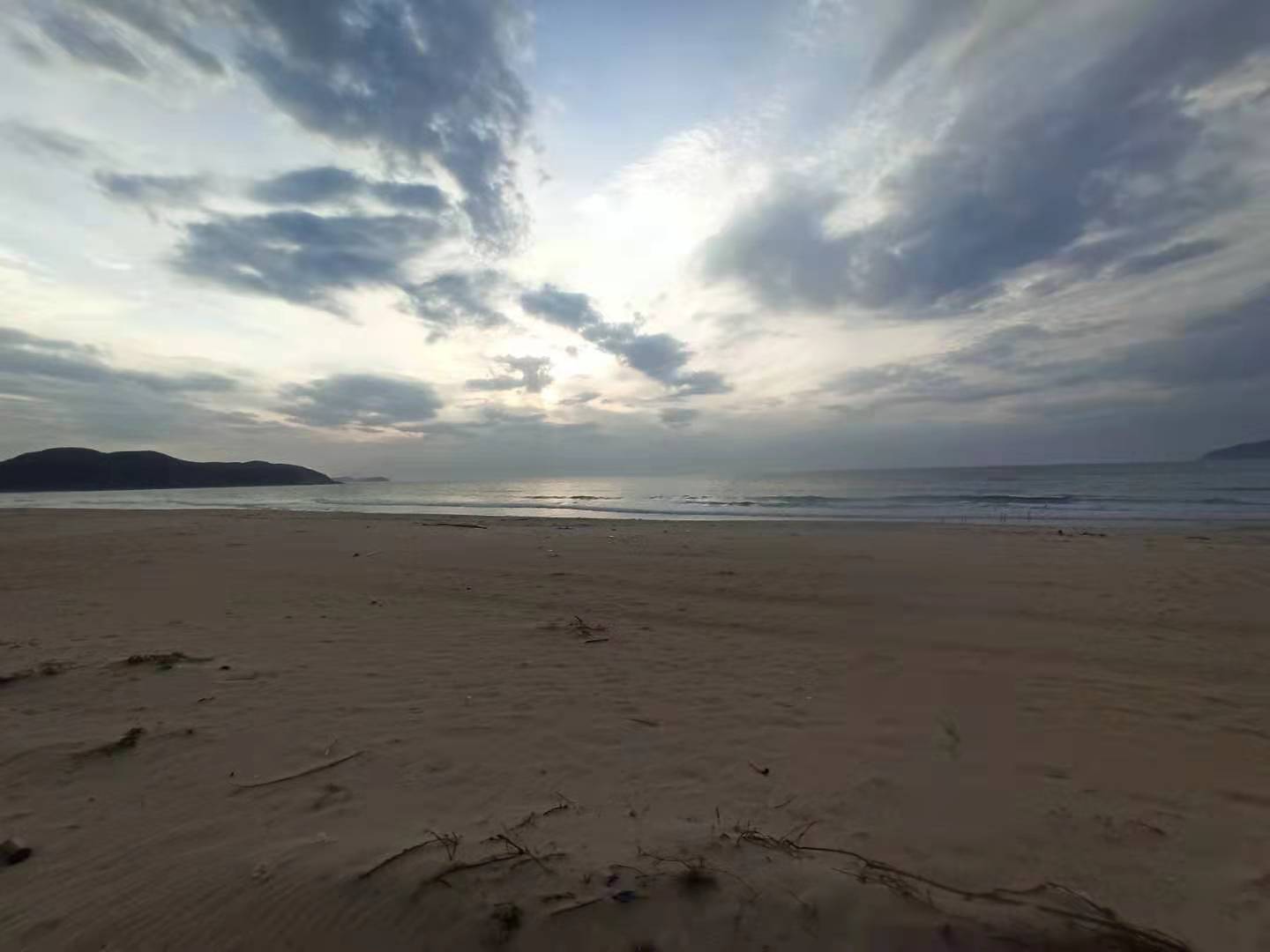 For people who are looking for luxury and a five star experience, this is not going to be the type of hotel nor beach that you're going to want to go to. 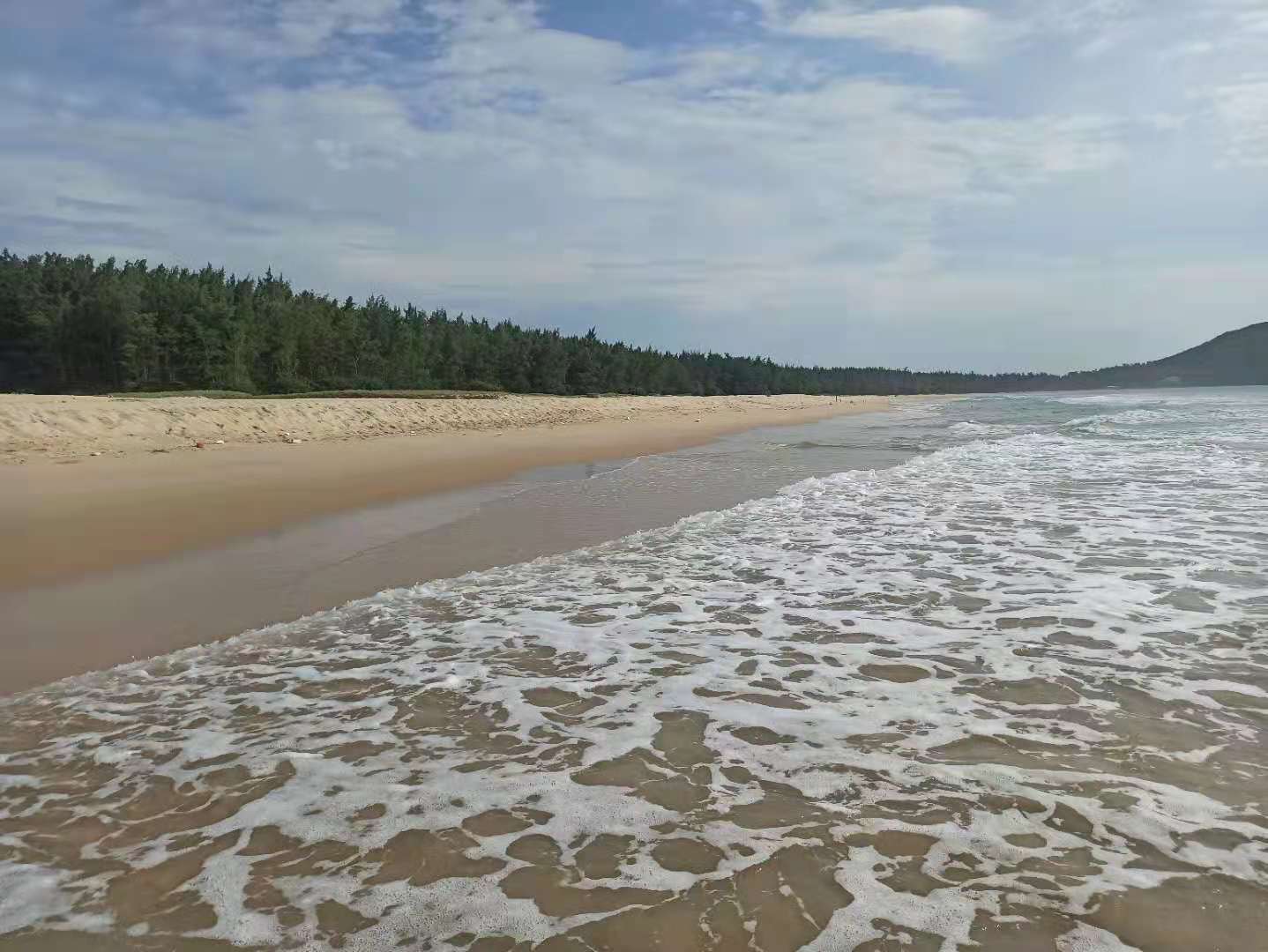 This is really for the adventurous and well experienced travelers. People who are okay with paying for service that isn't absolutely perfect.

First we want to give you all of the plus sides of this hotel and the beach right by it.

It's nearby to a fishing village and about 30 minutes by car away from Wanning. So if you're hungry and you can speak Chinese or use Chinese apps to find something to eat, then you won't really have any issues. There are places that you can go to around here, though not close. 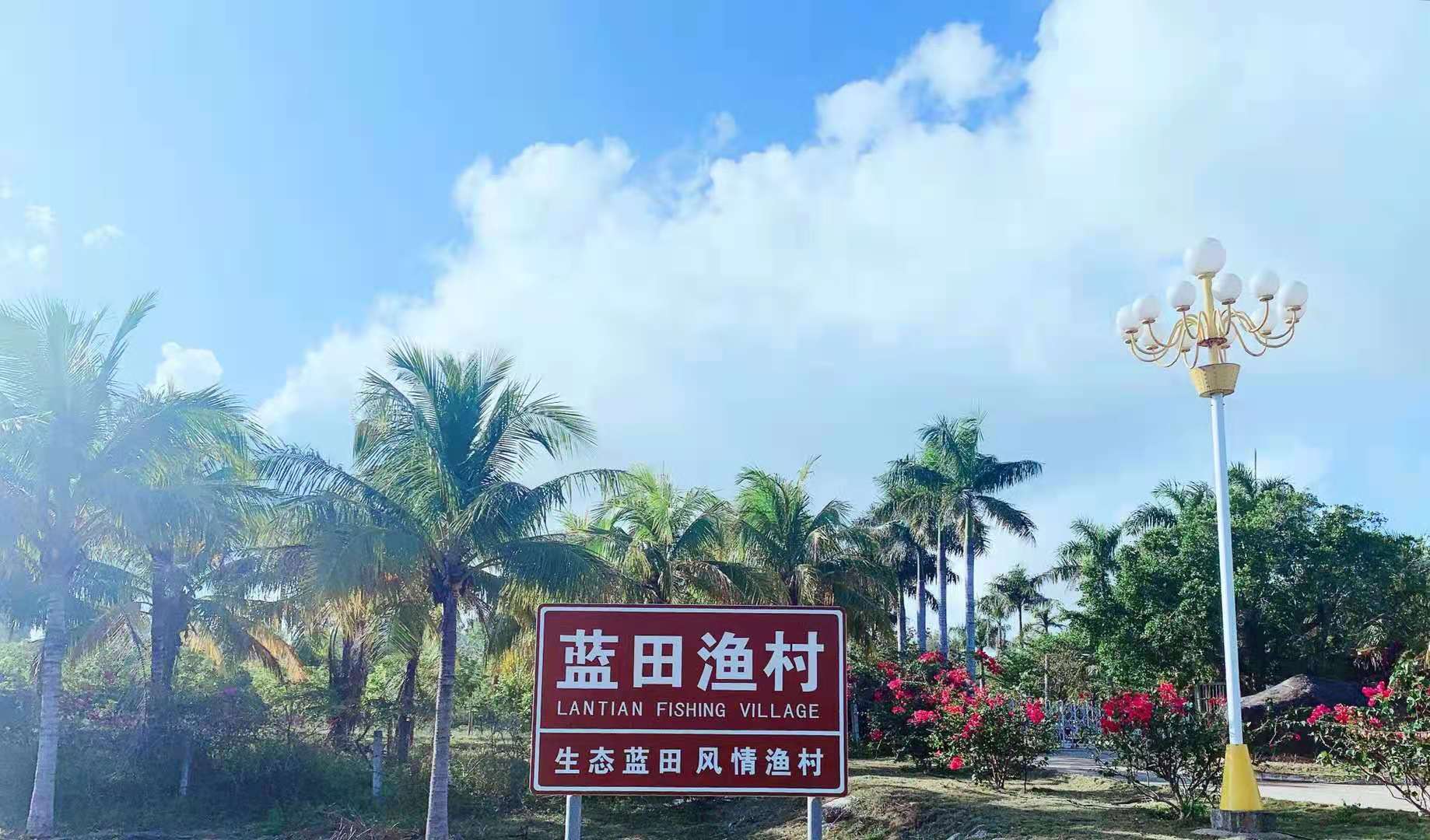 The hotel itself gives you little cabins, or bungalows, as we like to call them. It's a private space away from everyone else. You can't hear anybody else. You don't have to walk by people at three o'clock in the morning as you're fumbling to get your hotel card key. It's just you at your cabin. 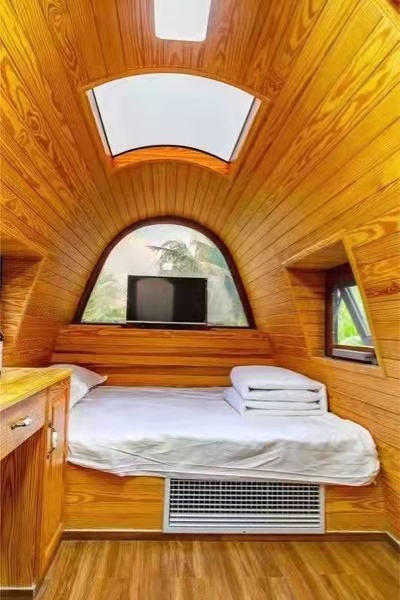 Inside the cabin there's a living room, a bathroom and then either a huge king sized bed or two single beds. We pushed the two double beds together and it made plenty of sleeping space for a family of four. 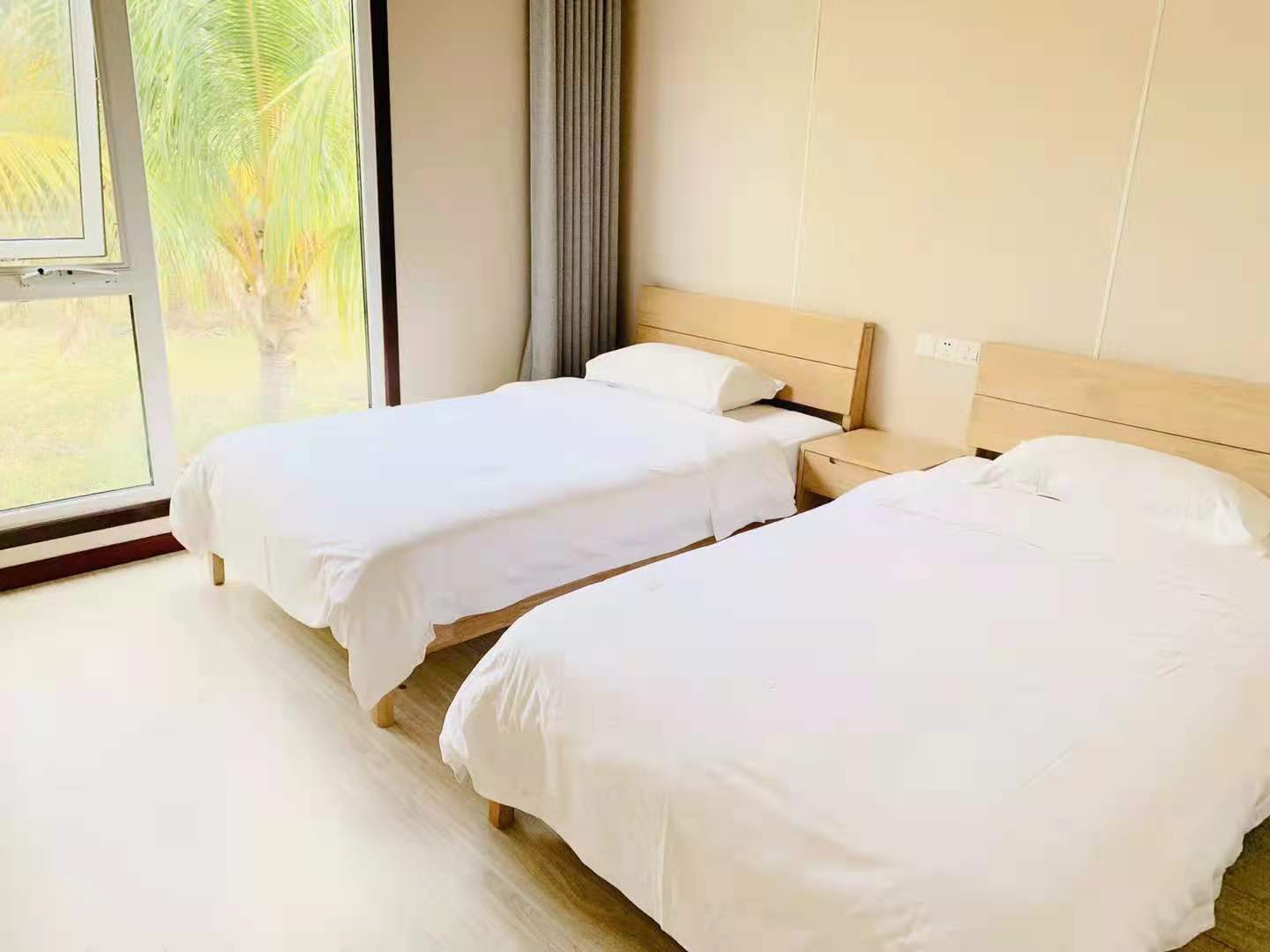 The AC works really well. As far as a living space for two to three days it was really great.

There's also a discount on staying at the hotel if you stay for more than three days. 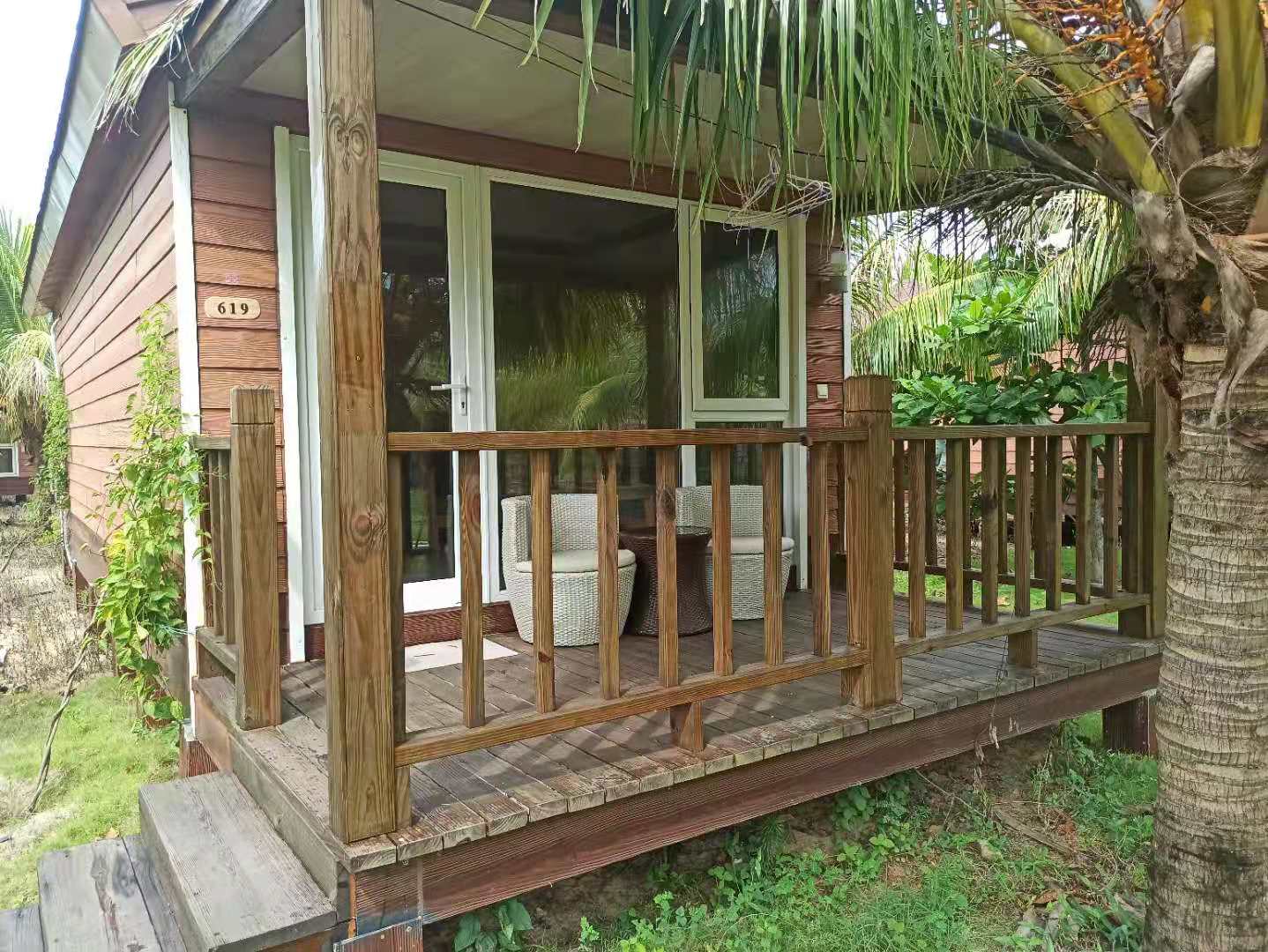 It is on a beach that doesn't have a lifeguard, and we were told that it's really dangerous. We kept in mind that swimming is dangerous anywhere in Hainan especially with people who can't swim coming from the Mainland. There were still a handful of people out swimming after we finished on our SUP boards. We also didn't feel any crazy riptides and they have surf lessons so swim at your own risk.

The hotel is within a clear sight of Xiaoling and Daling Islands that have plenty of coral reef and is a nature reserve. A reputable source at the hotel told us that there aren't any tours to the islands, and so if people are trying to sell you tickets to go there, it’s totally illegal and not supposed to be allowed. Boats aren’t supposed to go over there, though they can go to the islands to ‘rest’ before being shooed off.

We did still see people who clearly head there for tourism but they do so quietly and try to stay undercover. 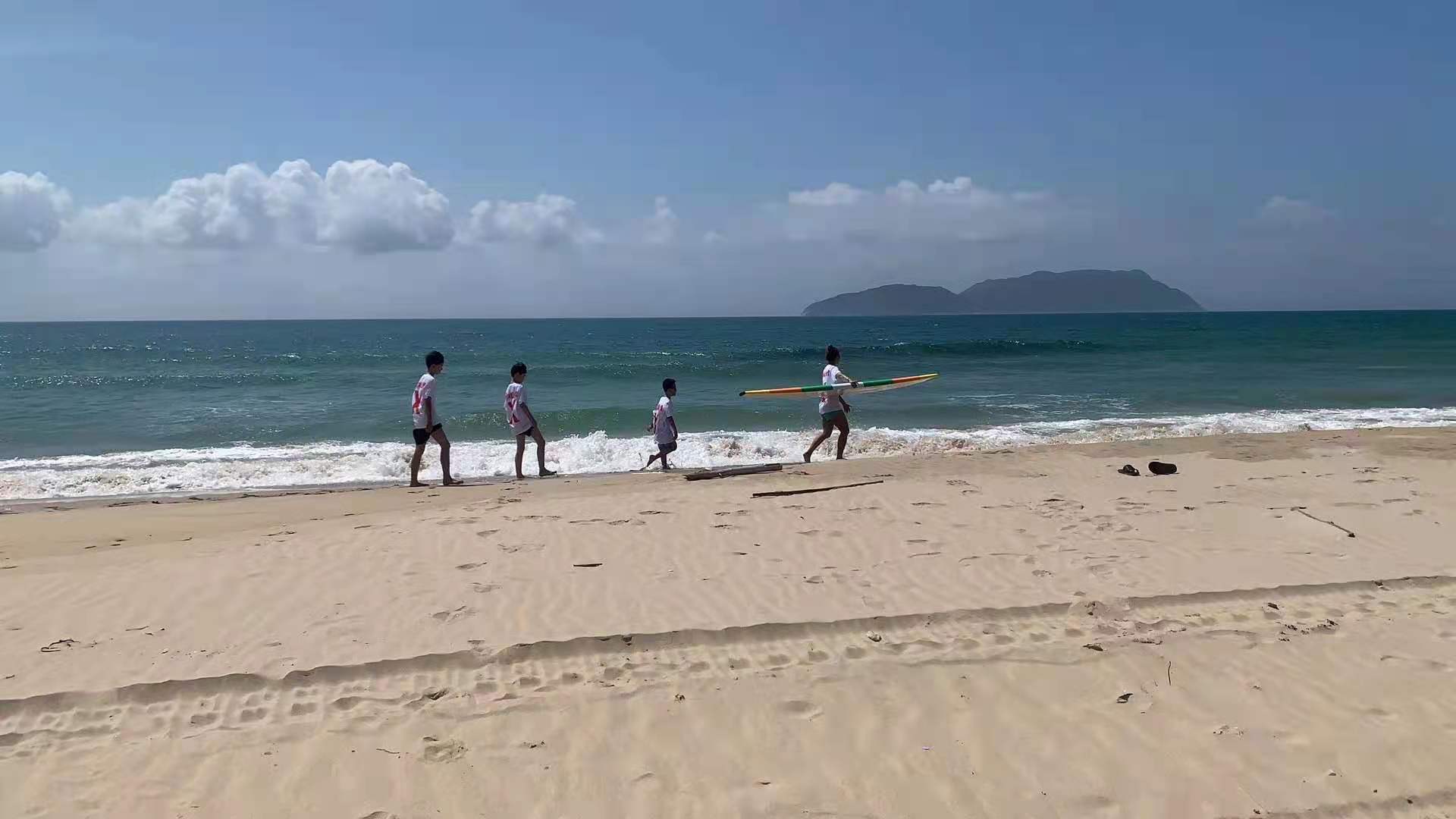 The hotel also has surfboards, if you'd like to rent or get surfing lessons. Rent a surfboard for RMB100 a day. Lessons are RMB468 per person in a class of many. RMB768 for one on one lessons and RMB888 for a pair. 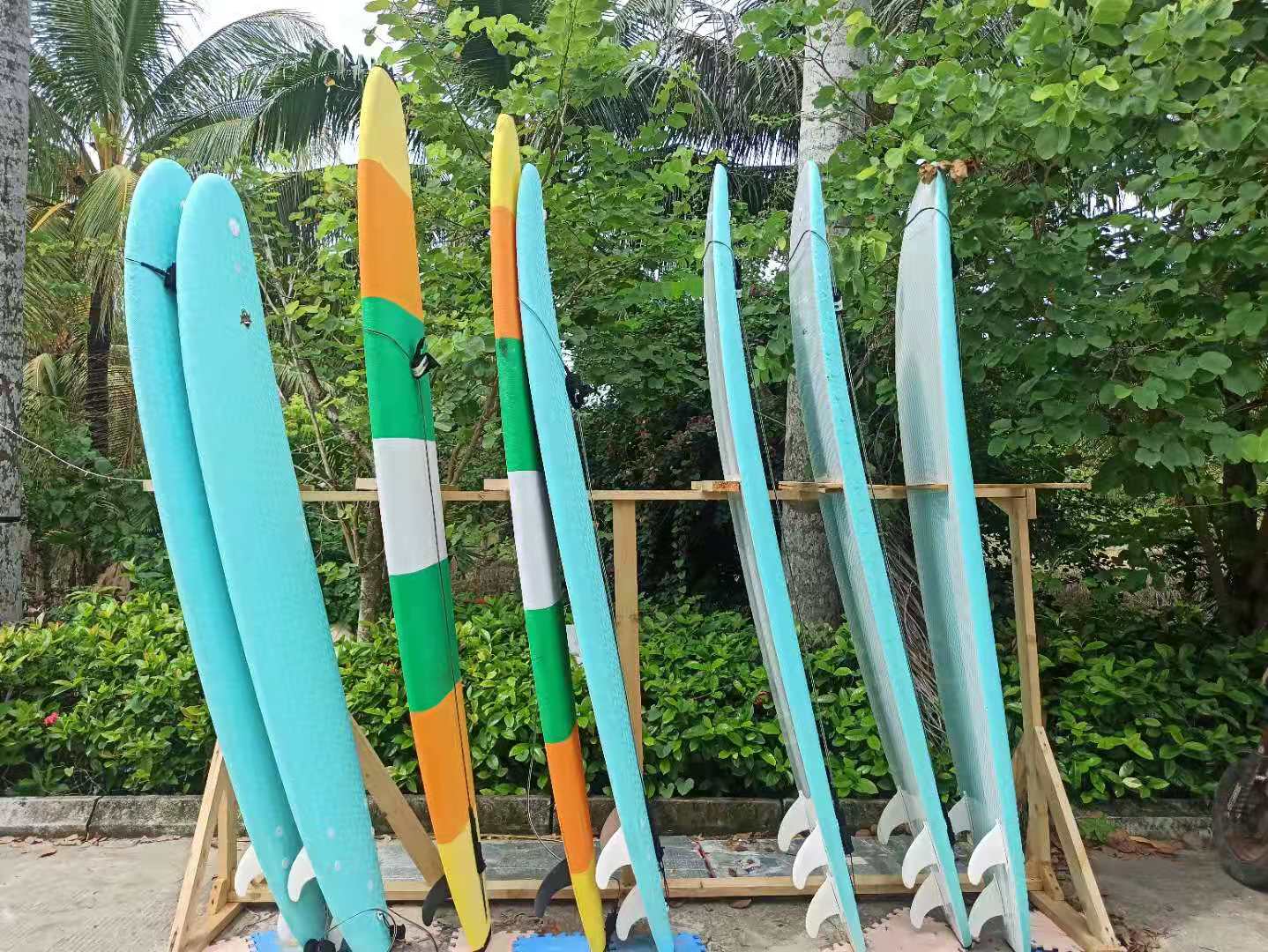 We also highly recommend that you rent a car to be able to get here, as traveling here by train and then taxi will be difficult. There’s not a lot of car traffic in the area. 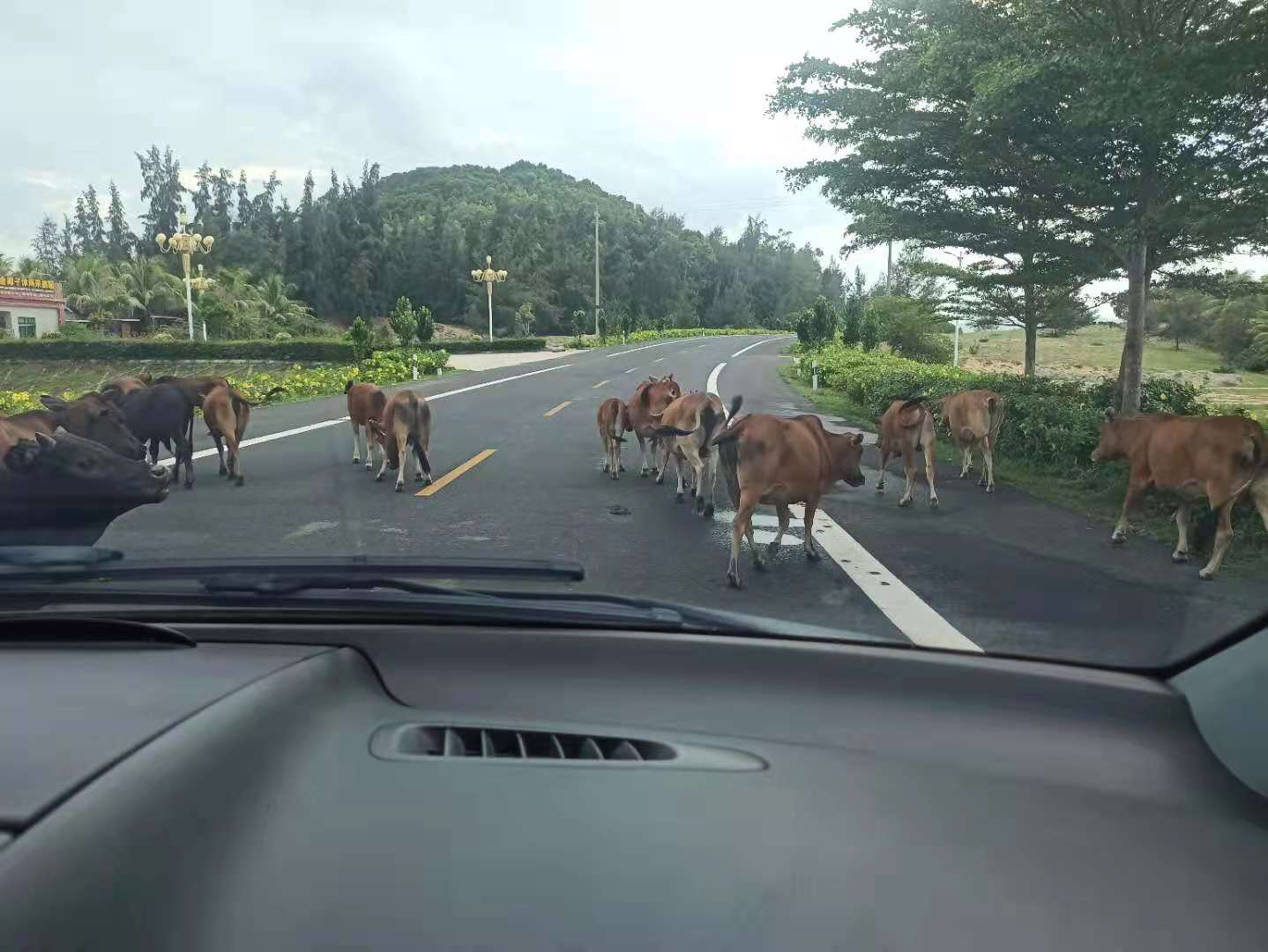 The downsides of staying at this specific hotel is that the toilet is where the shower is in some of the rooms. That of course is just gross for most people.  But the cabins are kept clean. Clean sheets, couch, floors and bathroom. They'll give you extra towels and extra pillows for more people if needed and they also provide a small amount of soap and shampoo. Two toothbrushes are also included. 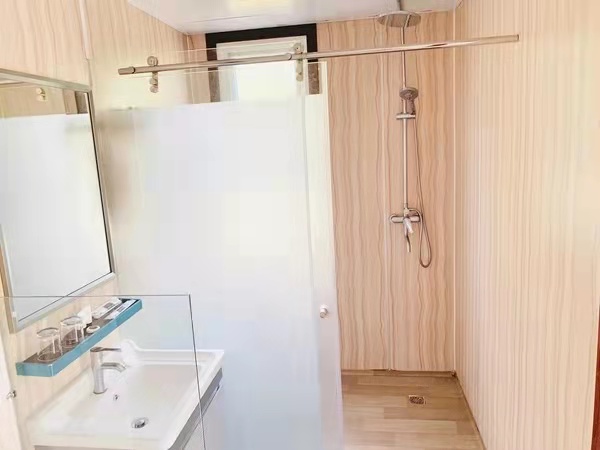 One more downside is that there aren’t any real supermarkets nearby to the hotel, so you’ll need to leave the area to get things like coffee and anything super special.

Lastly, the customer registration system is difficult and the staff don’t know how to upload foreigners in the system (though they can). So you’ll need to go to the PSB just five minutes away to register or learn how to work the system yourself. That is a headache but the seclusion of this location can’t be beat. 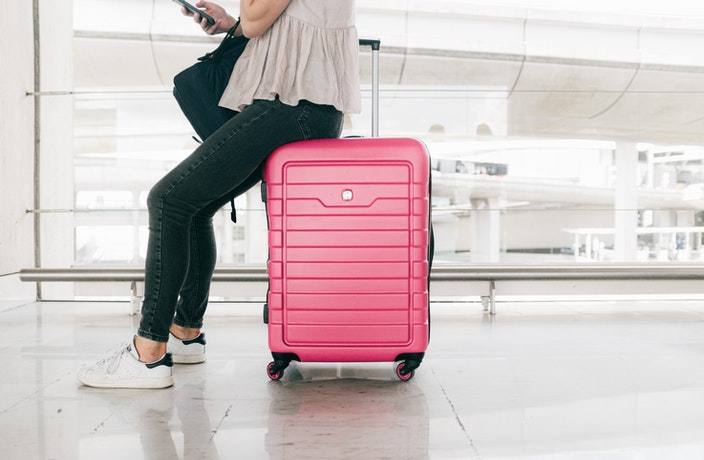 Find out if you should cancel that trip.

Fly in a ‘UFO’ at This Sanya Tourist Area...