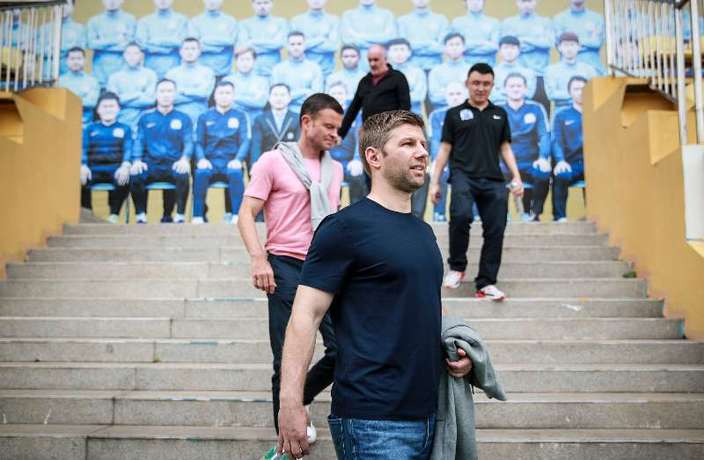 Guangzhou R&F are the latest Chinese club to establish ties with a European football team. They struck a five-year partnership with German side VfB Stuttgart in early October, which will see the Guangzhou side benefit from Stuttgart’s vast experience in footballing strategies, and their excellent youth coaching methods.

Stuttgart ain’t no slouches when it comes to developing excellent young footballers. Their youth academy has produced the likes of Mario Gomez and World Cup winner Sami Khedira, and more recently, national side players such as striker Timo Werner, defender Antonio Rüdiger and goalkeeper Bernd Leno.

While R&F stand to benefit greatly from this partnership, the German team will also be able to advertise their club brand in China, thereby gaining a major foothold in a massive emerging sports market and also the most populous country on earth.

We caught up with current VfB Stuttgart youth academy director, and former Germany and Aston Villa midfielder, Thomas Hitzlsperger, to talk a bit about this partnership and to grill him on his footballing days in England.

So what is the plan for VfB Stuttgart’s partnership with Guangzhou R&F? In what way does each side benefit from this partnership?
Our strategic partnership with R&F, or Fuli as the fans name the club, is initially set for five years. This partnership covers virtually all areas of activity and business in professional football. R&F can draw on our concepts, strategies and structures in the areas of sporting organization, sporting development as well as marketing and sponsoring. In return, we will have an active involvement in R&F’s external communications and also the opportunity to utilize an extensive network of clubs in China, and gain a long-lasting foothold in China with the support and expertise of our counterparts at R&F.

Did you know that Guangzhou R&F has a very active expat fan club called the Fuligans? Would you ever consider joining in on one of the fan club’s events while you are here in Guangzhou?
Yes, I heard about it. I think having such passionate fans is a big asset for R&F. Hopefully I can meet up with them during my next visit in Guangzhou and also watch a home game of R&F. I heard a lot about the special football atmosphere in Yuexiushan Stadium. We visited it and I have to admit that this stadium, even if it is not that big and not as modern as most of the stadia in Germany or England, has its special charm.

During your time in England you were known for having a wicked strike with your left boot (nicknamed The Hammer) how did you develop that shot over time?
It was pretty obvious when I was a kid that my left foot would be a big asset. But I kept practicing to become even better, spending hours and hours hitting the ball against a wall, to practice my passing and ball control.

You were also known for developing a brummie accent during your time in Birmingham. Tell us about that?
I wasn’t aware of the many accents at the beginning. But I was adamant to speak English fluently so I listened carefully and talked like everyone else around me. Eventually I developed a brummie accent and it wasn’t a bad thing. Clearly the Villa fans knew that I enjoyed being in Birmingham and I am still a Villa fan to this day.

Your former team, Aston Villa, is currently without a manager, would you ever consider taking a managerial role or returning to the premiership in any capacity?
Never say never – but to be honest: Right now I’m not thinking about becoming a manager. I have a fulfilling job as Director of Youth Academy at VfB Stuttgart, which I started several months ago, and also our club members elected me as member of the executive committee. So there are a lot of duties and responsibilities for me each day, but also even more new things to learn and to get in touch with. Because of that huge variety of themes and tasks I like my actual job very much.